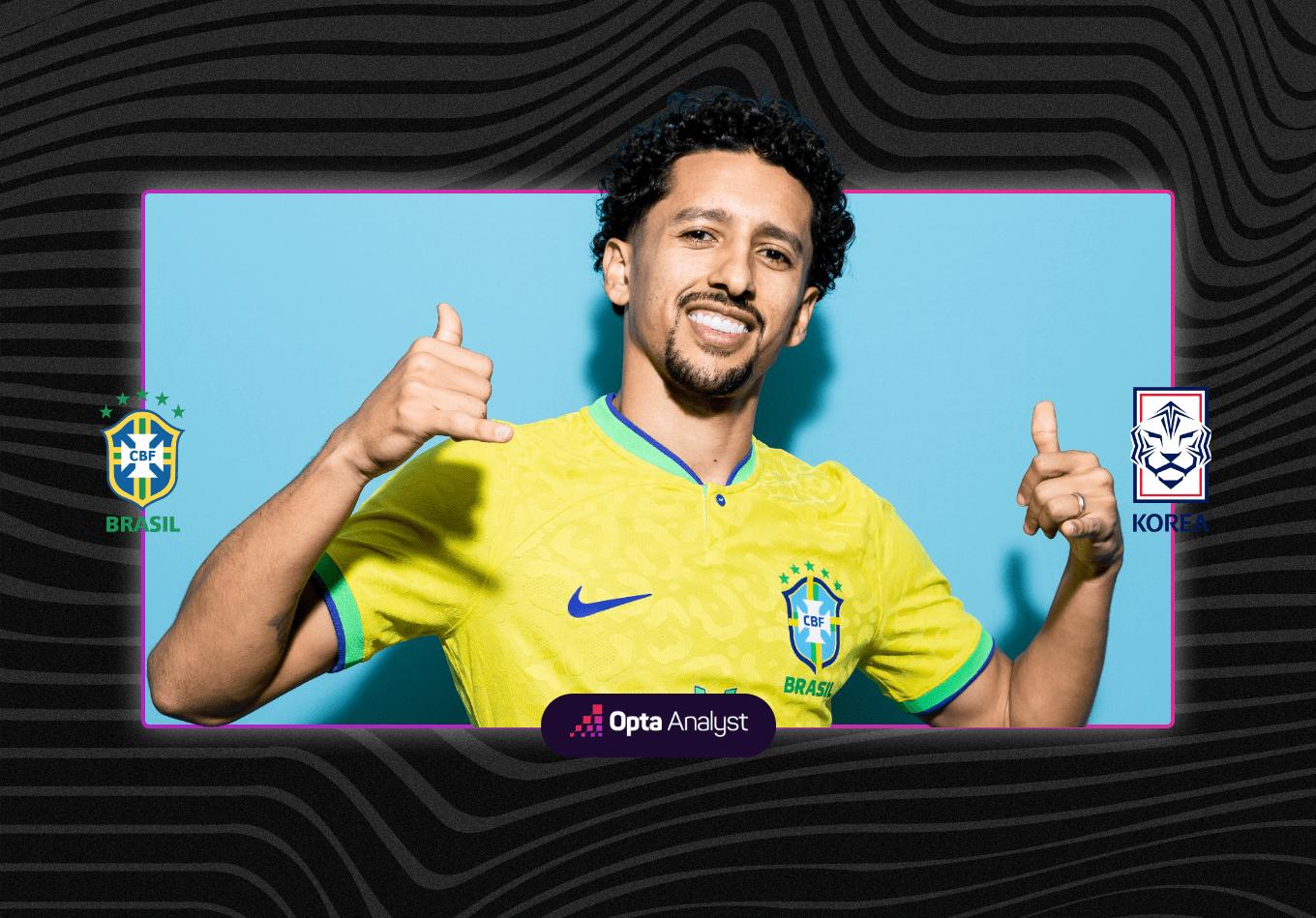 After winning Group G, Brazil face Group H runners-up South Korea in the round of 16 at Qatar 2022. We preview the knockout stage match ahead of kick-off at Stadium 974, Doha on Monday, with added insight from our football predictions supercomputer.

Brazil’s World Cup last 16 clash with South Korea on Monday promises to be an emotional occasion for all associated with the Selecao.

Pele helped Brazil to three World Cup successes and is revered by many as the greatest to ever play the sport.

The 82-year-old remains an iconic figure for Brazilian football, and the team will undoubtedly have him at the front of their minds as they take on South Korea at Stadium 974 on Monday.

Current talisman Neymar will presumably be even more desperate to feature in the match, with tributes to Pele expected from both players and fans.

The Paris Saint-Germain star injured his ankle on matchday one and sat out the rest of the group phase, with Brazil managing to top their section despite defeat to Cameroon on Friday.

Brazil have always been hopeful Neymar will be able to feature in the knockouts, with his father saying in an interview earlier in the week that he would be “back to his best” in time for the final, assuming the five-time winners made it that far.

It would appear Neymar has a chance of featuring on Monday, with captain Thiago Silva suggesting it was not out of the question.

“It depends a lot on training,” he said. “It seems that there will be a test a little more on the field, I don’t know if he will put on his boots.

“Only from then on can we pass on something more concrete to you, but until then I cannot pass on ahead of the doctor on this situation.

“[The injury] must be tested, to see how the ankle is, if it will hold up or not, if it will be in a little pain. He will have pain, that’s part of it, I’ve had this type of injury.

“However, if everything goes well as planned, the hope is that he will be available. But I leave that to Tite and the doctor.”

Brazil are going to be without Gabriel Jesus and Alex Telles, both of whom have been ruled out for the rest of the tournament, making Neymar’s potential return even more important, along with the continued high level of performance from stars like Richarlison and Vinicius Jr.

Nevertheless, they will be firm favourites having progressed from each of their previous seven last-16 matches at the World Cup, last getting eliminated at this stage in 1990 against Argentina.

Similarly, South Korea have not played a knockout game at the tournament since 2010, and their only win (excluding penalties) after the group stages came as co-hosts in 2002 when they beat Italy in the round of 16.

But coach Tite insists Brazil – who beat South Korea 5-1 in their last head-to-head clash in June – will not be complacent.

He said: “Brazil lost to Cameroon; Portugal lost to South Korea; France lost to Tunisia; Argentina lost to Saudi Arabia. I think the results speak for themselves.

“I think these are very strong, very tough matches. I don’t think we can think any prior situation makes it easy.

By the same token, Hwang Hee-chan – scorer of South Korea’s decisive goal in the dramatic 2-1 win over Portugal that took them through at the expense of Uruguay and Ghana – is adamant the Taeguk Warriors are not in the last 16 just to make up the numbers.

“Just because we play Brazil, it won’t mean we will be just happy to be there in the knockouts,” he said. “Our objective is to win and give our people something to cheer about. We’re not just happy to be here. We want to play well and win for our fans.”

With Kim one of South Korea’s biggest dangers, Raphinha will want to be firing on all cylinders to keep the left-back occupied and as deep as possible.

But on top of that, Brazil’s injury issues could result in a somewhat makeshift backline. It would seem either the 39-year-old Dani Alves or centre-back Eder Militao will start at right-back, and they will be keen for some support, particularly as Son Heung-min also operates from the left as he did initially against Portugal.

One of South Korea’s main attacking routes in this tournament has been down the left flank, with Kim Jin-su’s quality deliveries a real feature.

Only three defenders have recorded more open-play crosses than his 14, while Joao Cancelo (six) is the sole full-back to complete more of them than Kim (five). Cho Gue-sung has proven an aerial threat already in Qatar, and they will need to exploit every strength possible against the Selecao.

Brazil are, as expected, massive favourites for this. Our supercomputer – famed for its World Cup predictions – gives them a 76.2% chance of progressing to the quarter-finals.

South Korea on the other hand, are rated at just 8.2% to win at full time in this tie. But then again, who had them even getting this far before matchday three?