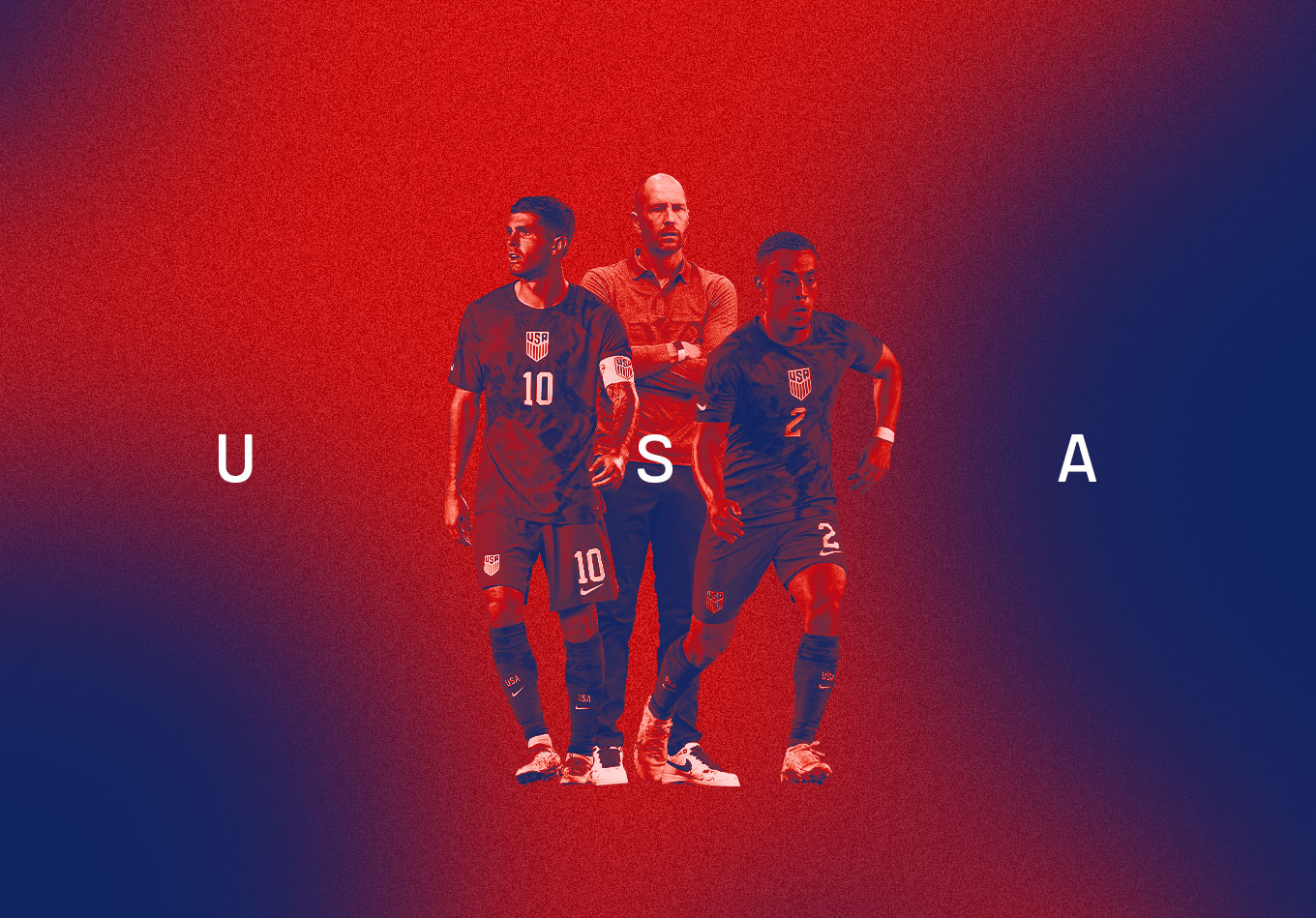 Mapping out the United States’ Potential Route Through the World Cup

The bad news for those invested in this team is the United States men’s national team has scored against one of the last seven 2022 FIFA World Cup-qualifying opponents they’ve faced. The good news is our supercomputer is an emotionless electronic encephalon devoid of manic internet opinions about Gregg Berhalter. It takes into account more than a bad 90 minutes against Japan and a somehow more depressing 90 against Saudi Arabia.

The #USMNT have one win in their last seven matches against teams going to the 2022 World Cup. They haven’t scored in the other six:

Because of those sobering scorelines, some of this may feel a bit hopeful and toward the end even delusional, but, as Lloyd Christmas taught us, sometimes that’s what numbers are all about. Anything above zero is telling us there’s a chance. And if there’s a chance, you know quite well we’re going to write an article about it.

Onward to Qatar 2022 for the USMNT. Be it short or long, this is the path forward for Tyler Adams, Christian Pulisic, Sergiño Dest and the rest of Berhalter’s selections.

For quite a while there, it felt like we could assume the United States would qualify out of CONCACAF for the World Cup every four (or four and a half) years. We learned the hard way in 2018 that’s not the case, but that’s OK because at some point we’ve all had our unexpected failures. For some, that was an infamous match against island nation Trinidad and Tobago that kept the USMNT from reaching Russia. For others of us, Level 1 of island-hopping Super Mario Bros. 3 presented the occasional issue if we weren’t paying attention and that kept us from reaching the Desert Land.

So how did this team get here? In part by selecting the most fresh-faced group of players to qualify for World Cup 2022. Out of all 32 World Cup teams, the United States had the youngest average starting XI age in their qualifying games at an average of 24.9 years old, weighted by how many minutes they played. Now, just how young is that? For the sake of comparison, England’s team is considered relatively young. Gareth Southgate’s squad on average was 27.2 years young for the third-lowest figure.

That’s how they elected to go about getting into the group. Here’s what stands in their way of getting out:

Granularity, as it often does, has killed the party here with third place being the most likely spot for the United States to finish (28.99% to finish second and 29.10% to finish third), which doesn’t get you through to the knockout rounds like it did back in 1994. The beauty of the World Cup, however, is two teams advance, which means the U.S. actually have a rather attractive chance of getting to the…

Reaching Level 2 of Mario 3 was way easier than this, but the reality is this group stage situation could be a whole lot worse. It is worse for most of CONCACAF. Poor Costa Rica have Spain, Germany and that Japan side that shredded the U.S. in Group E. Canada have Belgium and Croatia in Group F. Mexico certainly have a path to the Round of 16 from Group C, but Argentina haven’t lost since a decade fondly remembered as the pre-COVID 2010s and Poland have a guy who can score a great deal of goals.

For a team that’s had the issues the United States have had in recent matches to have a better than two in five chance of reaching the last 16 is extremely fortunate, and that’s because Group B has two winnable games and one apprehensive favourite. Of course, that’s also the mindset for Iran and Wales and it will only come true for one or two of them. The group is led by an England side that’s not entering the tournament on the highest of notes after coming to know the agonies of UEFA Nations League relegation. Aside from perhaps Portugal (or Uruguay, Ghana or South Korea, depending on your own personal Group H rankings), there might not be a group favourite that teams would rather be stuck with right now over the Three Lions. So, for the U.S., be OK with taking the shameless 2010 approach, get a point in that match on a terrible goal and things are looking pretty solid after seeming so so SO bleak during the September friendlies.

For whatever it’s worth, there’s also the oversimplified historical element. The United States have gone at least as far as the last 16 in four of the last seven World Cups, or four of the last six they’ve qualified for. That dates back to 1994 when the 24-team field made things a bit easier. Since the format changed in 1998 to 32 teams with half advancing, the U.S. have gotten to at least this stage 50% of the time.

Say that 45.39% becomes 100% and they progress. Who are the U.S. most likely to play in their knockout opener? If they get through, the supercomputer favours a second-place finish. That’d put them up against the winners of Group A, aka the Netherlands or a pretty notable dark horse group winner in Senegal, Ecuador or hosts Qatar. Similar to Group B, Group A does not have a second team with even a 20% chance of progressing in poll position:

But if the U.S. pull some sort of 180 from September and win the group, or if one of the other three teams listed above top Group A, the United States could be supercomputer favourites in the round of 16 and up go the chances of Berhalter’s squad reaching the…

What a 20-year anniversary it would be. Then-Crystal Palace defender Gregg Berhalter was 28 years old when the United States last reached the quarter-finals of a World Cup. Berhalter the player played two matches the last time the tournament was held in Asia and was captained by Sunderland midfielder Claudio Reyna. The tournament’s Best Young Player was a lad named Landon Donovan. Berhalter is now 49 but right where he was during the other three matches of that tournament: on the sideline. Managing, this time. If he brings the U.S. this far, is he coaching perhaps the 2022 Best Young Player in what is essentially his footballing nephew Gio Reyna?

That’s the heavy speculation. The light(er) speculation grounds us back in who the U.S. might meet at this stage, and that is a verifiable downer. Plenty of people believe Lionel Messi is the best football player in the history of the world, and he’s having something of a rebirth at 35 in his second season in Paris. Internationally, he plays for a team that hasn’t been defeated in quite some time – 35 matches – and are our third favourites to win the tournament behind some of their South American neighbours and France. Should Argentina go unbeaten in the group stage and progress through the round of 16, they will have already set the all-time record for consecutive matches without a loss, surpassing Italy’s 37 that ended in October 2021. A theoretical quarter-final matchup with the U.S. would line Messi & Co. up for a very realistic path toward extending that.

If this is a bit too much to keep the imagination from stalling out, U.S. fans can also dream of a fixture that sets up another dos a cero: Yeah, the U.S. finish second to England, but Mexico do the dirty work and end that Argentina streak and win Group C. They then beat Group D runners-up Denmark (ahead of Tunisia and Australia) in the round of 16 to set up an all-CONCACAF quarter-final. There you have what’s far closer to a coin flip to reach the final four.

Surely the article can end now, right? At the quarter-finals, we’ve gone as far as any modern U.S. team. Except the numbers are still telling us there’s a chance of the United States could carry on at this weird November-December Qatar World Cup. And the year 1930 was a long time ago, but it did happen and the U.S. reached the semis. Shhhh, tournament format historians. Perhaps there’s even some more recent historical precedent (hope) for this because the United States ended Spain’s run of a 35 consecutive matches without a loss back in 2009. If they were to defeated Argentina and end another serious streak, there’s a pretty decent chance Spain would be waiting for them. But there’s an even better chance they’d be facing Group G’s Brazil in the…

OK, let’s set expectations. When you haven’t played Mario 3 for eight years because you missed the last Mario 3 Convention, Level 4 can be rough. And you may have even forgotten they’re not called levels. They’re called worlds in that seminal Nintendo eight-bit cartridge. World 4 is Giant Land – the one where you as Mario stay the same size and everything in your way becomes a little bigger. Even if you’re not convinced of Argentina’s strength – maybe you think too many of those 35 opponents weren’t legit, maybe you’re still jaded by their 2018 team, maybe you think it’s been too long since they won a World Cup two years before Mario 3 was released in Japan – you’re going to have a tough time arguing two of the other three favourites to win the tournament aren’t to be taken seriously. Everyone’s to be taken seriously at this stage, and Brazil and Spain have likely won World Cups in your lifetime.

Even so, there is an outsider’s outside chance (we reiterate chance here) that the United States of America could change the footballing world as we know it by reaching the World Cup…

Here are three things that have definitely occurred with (arguably) less than a 2.33% chance of happening in U.S. sporting history:

OK, No. 3 on the list doesn’t quite fit the criteria. Wondolowski’s massive chance just before the match went to extra time had an xG of 0.63, meaning there was a 27% chance of him missing it. But it’s in here to show that moments do come up in World Cups in which the odds can flip and a team that wasn’t supposed to be there could realistically have still been alive in the next round.