1 in 781: The Long Odds Behind ‘One of the Most Dramatic Playoff Games in NBA History’ | The Analyst 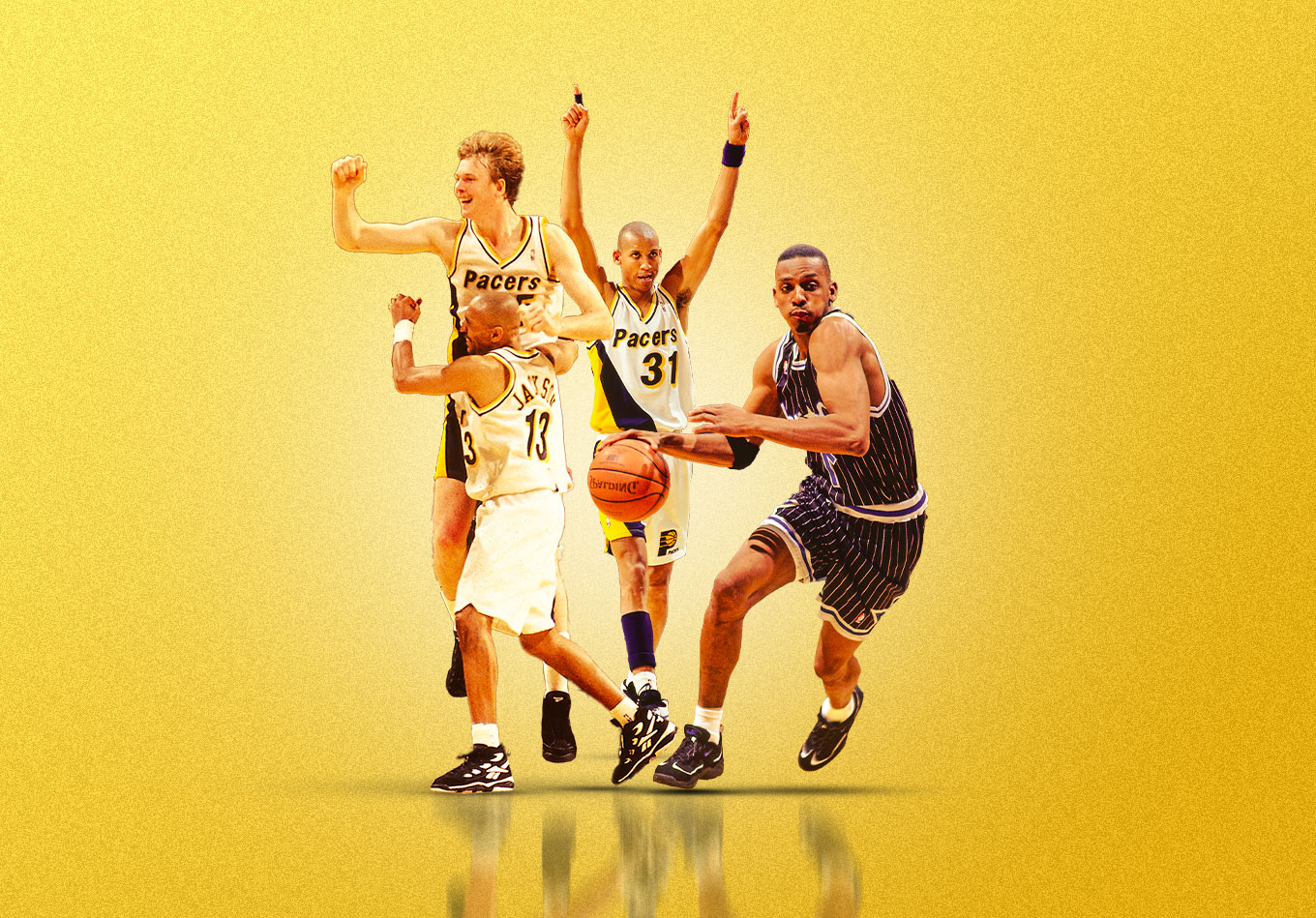 1 in 781: The Long Odds Behind ‘One of the Most Dramatic Playoff Games in NBA History’

We examine the probability of the improbable in Game 4 of the 1995 Eastern Conference finals when four successive clutch shots went down in the final 13.3 seconds. What were the odds of it happening?

The Indiana Pacers of the 1990s were perennial upstarts.

Featuring Hall of Fame sharpshooter Reggie Miller and an effective, well-rounded supporting cast, Indiana had the Eastern Conference’s fifth-best record between 1993-94 and 1998-99 and reached the conference finals in four of six seasons – only to fall short all four times.

The Pacers were the underdogs in the first three of those matchups, facing Patrick Ewing’s New York Knicks in 1994, Shaquille O’Neal’s Orlando Magic in 1995 and Michael Jordan’s Chicago Bulls in 1998, yet they pushed all three teams to seven games.

Indiana’s Game 7 losses in 1994 and 1998 were painful nail-biters, unlike the team’s decisive 24-point loss to Orlando in 1995. But the fourth game of that Magic-Pacers series, played at Indiana’s raucous Market Square Arena on Memorial Day, May 29, 1995, had a breathtaking ending. It was a finish that got us to use technology a quarter-century later to determine just how improbable it was.

Uber-talented, the Magic were the East’s top seed at 57-25, led the NBA in scoring at 110.9 points per game, and were second in field-goal accuracy at 50.2%. In addition to O’Neal’s dominating presence inside, the Magic had an All-NBA First Teamer in Penny Hardaway, the only player in the league to average at least 20 points, seven assists and four rebounds in ’94-95.

The Magic’s victims in the conference semifinals were the Bulls, who had made a late-season surge after Jordan’s March return from his 17-month NBA hiatus. In the Game 6 clincher, Orlando erased an eight-point deficit by scoring the final 14 points to stun the Bulls on their home floor. It was the last time Jordan would be on the losing end of a playoff series.

Indiana’s second-round playoff victory over New York was no less exhilarating. In a series full of dramatic endings, the Pacers survived the crucible of a Game 7 at Madison Square Garden, claiming a two-point victory when Ewing missed a finger roll on the game’s final possession.

O’Neal dominated Indiana in the series’ first two games with 71 points and 21 rebounds, Hardaway handed out 29 assists, and the home-standing Magic shot 54.8% in taking both games. The heavy favorites looked to be on their way. But fortunes changed at Market Square Arena in Game 3 – perhaps with the help of some favorable whistles. Indiana shot 41 free throws to Orlando’s 20, held a 38-26 advantage rebound advantage, and pulled out a five-point victory. The series stood at 2-1 for the Magic, with only four points separating the teams (Orlando 324, Indiana 320). Including the regular season, the teams had now met seven times in the 1994-95 season with the home team winning each contest.

The home team’s lead grew to 12, but the Magic went on a 12-2 run in the fourth quarter to go up by six. Again, fouls helped turn the tide. O’Neal and Horace Grant fouled out 14 seconds apart, and Rik Smits’ free throws with 1:11 remaining gave Indiana an 89-87 lead. After each team missed from the perimeter on its next possession, the Magic had the ball with just under 30 seconds on the clock, setting the stage for the whirlwind finish.

Hardaway was clearly the Magic’s best offensive option, and the ball was in his hands for almost the entirety of the next possession, with Derrick McKey and then Dale Davis defending him. With nine seconds on the shot clock, Penny drove towards the middle of the lane, drawing defensive help from Mark Jackson, which left Brian Shaw open on the right wing. Hardaway spotted him, and Shaw’s 3-pointer splashed in with 13.3 seconds showing to give the Magic a 90-89 lead.

Calculating the likelihood that any shot will be made in an NBA game is not a perfect science, but tracking data gets us very close to pinpointing the number. In 1995, player tracking was still almost two decades away, but we can use the broadcast footage to determine Shaw’s distance from the basket, distance from the closest defender (Jackson), how long he possessed the ball before shooting, and the number of dribbles he took (in this case, none). We find that, over the last seven seasons, shots matching Shaw’s attempt were converted at a rate of 36.9% league-wide.

But Shaw’s long-range shooting was hardly at league average in 1994-95. In the regular season, Orlando’s backup point guard made only 26.1% of his 3-point attempts – third lowest among the 111 players who tried at least 100 shots from beyond the arc. Noting that Shaw’s 3-point accuracy was about 27% below the 1994-95 NBA average of 35.9%, we figure his odds of making that clutch shot were 27% under the 36.9% conversion rate of the average shooter mentioned earlier. That put Shaw’s chances at 26.8%, but it put the Magic ahead by one point.

Shaw’s shot was a relatively open look for a poor shooter. The Pacers countered with the exact opposite: a great shooter in Reggie Miller, taking a contested, slightly off-balance 3-pointer over the outstretched hand of Nick Anderson. With 5.2 seconds remaining, Miller’s shot was true, and the Pacers swung back ahead, 92-90.

Using the same methods as above, we see that the average shooter, from the same distance and under the same conditions as Miller’s shot, is successful on one-third of his attempts. In 1994-95, Reggie shot 3-pointers at a rate that was 16% above league average, so his chances on that critical shot come out to 38.5%.

Trailing again by two points with the clock showing 5.2 seconds, the Magic could look to force overtime. But with O’Neal and Grant out of the game, a 3-pointer and likely victory was the more appealing option – even though it would take an even more difficult shot than Miller’s. Indiana went with a small, quick lineup to defend the 3-point line, but Hardaway took the inbounds pass near midcourt, took two dribbles to reach to arc and launched from just left of the top of the key.

The success rate on this shot for the average shooter is 26.5%. For Hardaway, whose 3-point accuracy in ’94-95 was slightly below league average, the chances were 25.8%. But with a one-point lead and 1.3 seconds left, the Magic’s chances to win were much higher than that.

But 1.3 seconds proved to be just enough for the resilient Pacers. With Miller unable to shake Hardaway’s defense, McKey’s inbounds pass went to Smits at the left elbow. Blessed with superb footwork for a big man, Smits executed a perfect head-fake on Tree Rollins and released a jumper from just inside the foul line. The shot left his hand with less than a tenth of a second on the clock.

Naturally, it was perfect.

To the disbelief of both teams and the 16,477 fans at Market Square, a fourth successive shot in the final 13.3 seconds had gone in, and this time there was no chance for Orlando to answer.

The odds of Smits’ simply making his shot, a clean look from 14 feet, are not terribly long. But odds of the play in its entirety – making a shot off an inbounds pass with 1.3 seconds remaining – are very long, just 30.6%. Indiana was that close to losing.

Our tote board for the four dramatic shots is as follows:

That’s eight times out of 1,000 that all four shots would go in.

That likelihood is based on each shot as an independent event. Making the odds even longer is the fact that all four had to be condensed into a span of four possessions with only 13.3 seconds ticking off the clock. Combing through data from the past 12 seasons, we find that all four shots are successful only 7.2% of the time when taken on four separate possessions within 14 seconds. Hurried shots cause field-goal shooting to plummet by 84.2% from the 45.6% the league has shot since 2013-14.

Applying that decrease to the likelihood we found for the last four shots on May 29, 1995, we get the most accurate measure of the chances that all four attempts would be successful. Taking our value of 0.81% and decreasing it by 84.2%, we’re left with odds of 0.13% for Shaw, Miller, Hardaway and Smits to have gone a collective 4-for-4 on their lead-changing shots. That’s one time in 781 opportunities that we could have expected the ending to play out as it did.

Ultimately, it didn’t lead to a series win for the Pacers, but Game 4 deserves mention among the greatest postseason finishes of all time.