The Highest Scoring World Cup Finals of All-time | The Analyst 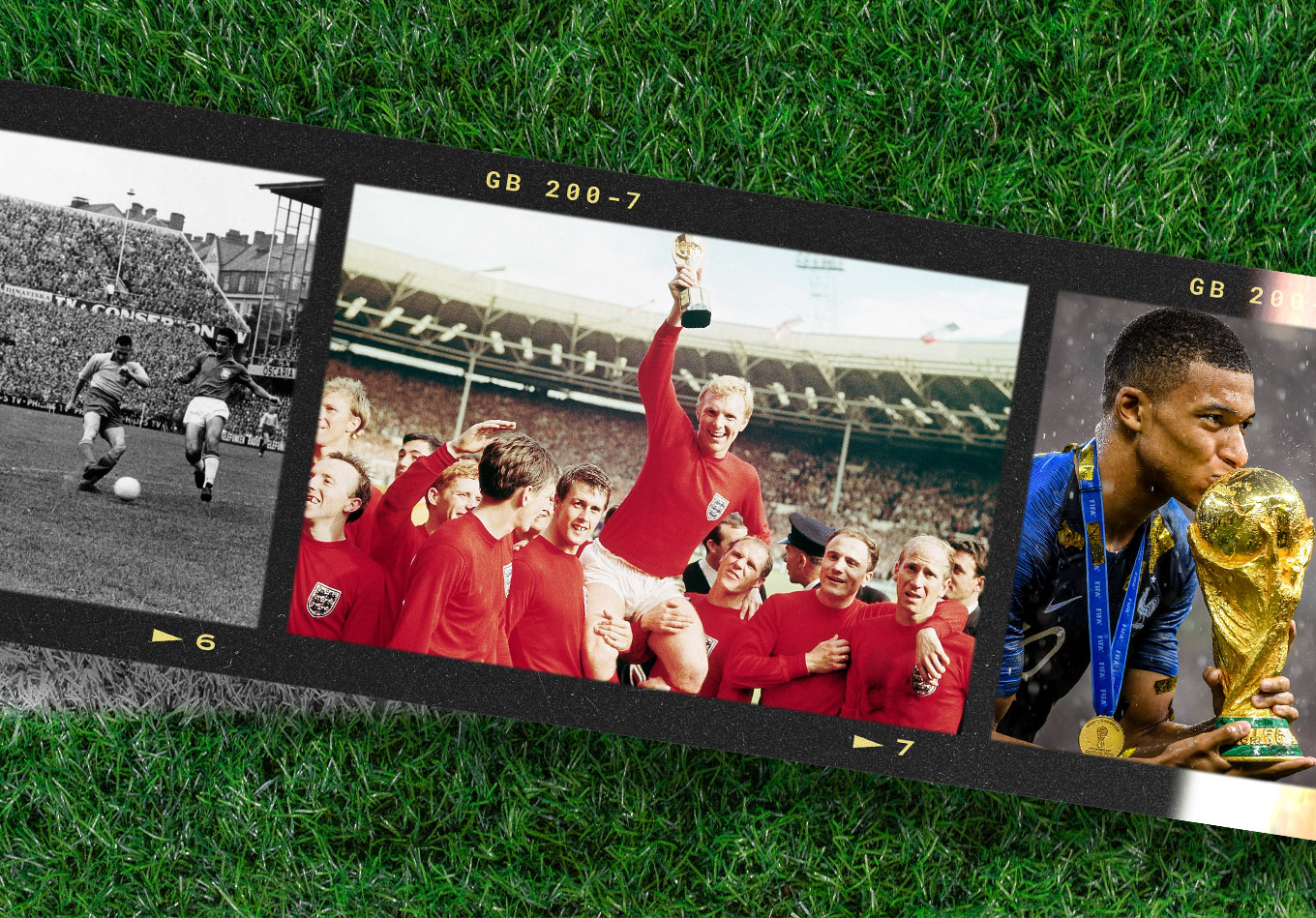 The World Cup Final. The biggest stage of them all. But does the occasional lend itself to tight, cagey affairs, or do the goals flow?

Across the 20 editions of the men’s World Cup to date, the finals have averaged 3.7 goals per game. That’s plenty more than the 2.4 goals per game in the European Championship finals, and the 2.3 in Copa America finals.

So, the data shows the World Cup sees more goals in its finals. And here’s the official rundown of the top-scoring men’s finals in history.

As well as being full of goals, their 5-2 victory set a host of other records. It marked the first and, so far, only time that the hosts of a World Cup have lost in the final, and this game also shares the record for the greatest winning margin in a World Cup final (together with 1970 and 1998 – coincidentally (or not) finals that Brazil also won).

The game also bore witness to both the oldest and youngest players to score in a World Cup final.

The former accolade goes to Sweden’s captain Nils Liedholm (35 years, 263 days old), who opened the scoring after just four minutes with a neat finish from the edge of the box. Vavá equalised for Brazil shortly after, and then added a second after the half-hour mark.

But the moment of magic came in the second half as Pelé, just a 17-year-old at this point, scored Brazil’s third. He took control of the ball inside the penalty area, scooped the ball over an onrushing defender, then smashed it past goalkeeper Kalle Svensson. At just 17 years and 249 days old, Pelé is still the youngest goalscorer in a World Cup final.

Despite only appearing in Brazil’s final group stage game, this was his fifth goal in the tournament, after coming alive in Brazil’s knockout run. Pelé scored the only goal of the game in Brazil’s 1-0 quarter-final win against Wales, before plundering a hat-trick against France in the semi-final. He would go on to add two in the final, wrapping up the tie with a headed goal in stoppage time, taking his tally for the tournament to six overall – his highest single tournament total. Unbelievably, that was seven goals shy of the tournament’s top goal scorer: Just Fontaine, who scored 13 World Cup goals in 1958.

It seems that the World Cup’s penchant for goalmouth action began right at source, with the inaugural tournament seeing six goals in its showpiece match. Uruguay, the hosts, overcame Argentina 4-2, in a game that was a rematch of the gold medal game of the 1928 Olympics – a clash that Uruguay also won.

This clash is the first of four finals to have seen six goals in total. We’re leading with this one because it’s the oldest and, well, you’ve got to respect tradition.

In front of a packed crowd at the Estadio Centenario in Montevideo, Pablo Dorado put the hosts into the lead. Carlos Peucelle and Guillermo Stabile – the eventual golden boot winner – then scored to take Argentina into half-time with a 2-1 lead.

It took until the 57th minute for Uruguay to equalise through Pedro Cea. 10 minutes later they were in front courtesy of Idiarte Santos Iriarte. Héctor Castro sealed the deal with a last-minute fourth.

In coming back from 2-1 down at half-time, Uruguay remain the only side to go into the break trailing and turning around the game to win a World Cup final.

A random fact that you definitely will (won’t) care about, the 1930 World Cup final is also the only final to be played on a Wednesday.

The following day was declared a national holiday in Uruguay, too. Lovely stuff.

With war clouds gathering over Europe, the third FIFA World Cup took place against a bleak backdrop. On the continent, Austria were forced to withdraw ahead of the tournament due to being annexed by Germany. Spain meanwhile could not participate due to the ongoing Spanish Civil War.

It was Italy who emerged victorious, successfully defending their 1934 triumph, beating Hungary 4-2 in the final.  Vittorio Pozzo’s team become the first side in World Cup history to defend their title, and since then, only Brazil (1958 & 1962) have matched this feat. Pozzo remains the only manager in history to win two World Cup titles.

Gino Colaussi opened the scoring for Italy before Pál Titkos equalised for Hungary. Italy added a second through Silvio Piola after 16 minutes, and Colaussi bagged his second ten minutes before half-time, extending Italy’s lead to 3-1 at the halfway point. No World Cup final has ever seen more than four first-half goals (also four in 1958).

Midway through the second half, Hungary captain György Sárosi got his side back to within a goal of the Italians, but with eight minutes to go, Piola scored his second goal to complete a 4–2 win for the Azzurri.

That the 1996 World Cup final is the joint-second highest-scoring final in history is a little ironic, given that both the teams taking part in it were so solid defensively throughout the tournament.

Both sides topped their groups. Hosts England didn’t concede a single goal until the semi-final (a 2-1 win over Portugal) after enjoying 2-0 wins against Mexico and France, while Germany conceded just twice on their way to the showpiece, beating Switzerland and Spain in the group.

By the end of extra-time, each side would have doubled their goals against figures.

Prior to the tournament, the Jules Rimet trophy was stolen, but was recovered by a dog named Pickles four months before the tournament began. England found themselves in a pickle of their own after 12 minutes of the final, when Helmut Haller put Germany 1-0 up.

Geoff Hurst cancelled out that opener with his first goal of the game, rising unmarked in the box to head in a Bobby Moore cross. His next two goals would be far more memorable.

At 2-2 after 90 minutes, the game headed into extra-time. Alan Ball put in a cross from the right, and Hurst swivelled and shot from close range, the ball hitting the underside of the bar before bouncing down and definitely crossing the line. With Germany flooding men forward to level the game, Moore picked out the unmarked Hurst with a long pass, which Hurst carried the ball forward and fired into the roof of the net.

Moore is only the second player in history to assist two goals in a World Cup final (along with Pelé’s two assists in 1970), and he’s the only player to assist the same goalscorer twice in a final.

Hurst’s hat-trick remains the only one ever scored in a FIFA World Cup final.

England’s 4-2 victory in the final remains the only occasion that they have hosted or won the World Cup, and it remains the national team’s only major tournament win.

You have to fast forward 52 years before we find the next joint-highest scoring World Cup final. That came in 2018, in a clash between France and Croatia, hosted in Russia.

2018 was a tournament of firsts. It was the first time VAR had been implemented in a major international tournament, and it typically had a major impact.

A record number of penalties were awarded in the tournament, 29 in total, a full 11 more than the next highest tournament. That translated to almost one penalty being awarded every two games, as referees clamped down hard on pushing and shoving at corners.

In classic style, the new technology was both praised and criticised by commentators, none more so than when it played a big part in the final. Referee Néstor Pitana used the technology to award France a first-half penalty, which Antoine Griezmann dispatched to put France 2-1 ahead.

France’s opening goal was another first: the first-ever own goal in a World Cup final, as Mario Mandžukić flicked a Griezmann free kick into his own net. Ivan Perišić equalised for Croatia, before he was adjudged to have handled from a corner.

Premier League midfielder Paul Pogba added a third, before Kylian Mbappé became only the second teenager to score in a World Cup final after Pelé in 1958.

Despite the six goals, this final saw the two teams take just 21 shots combined. Only Germany vs. Argentina in 2014 saw fewer in the final.

That said, the 0.1 xG/per shot is the third highest in recorded history.

This is the age of expected goals.

There are three World Cup finals to have seen five goals: