Mapping out Brazil's Route to the World Cup Final | The Analyst 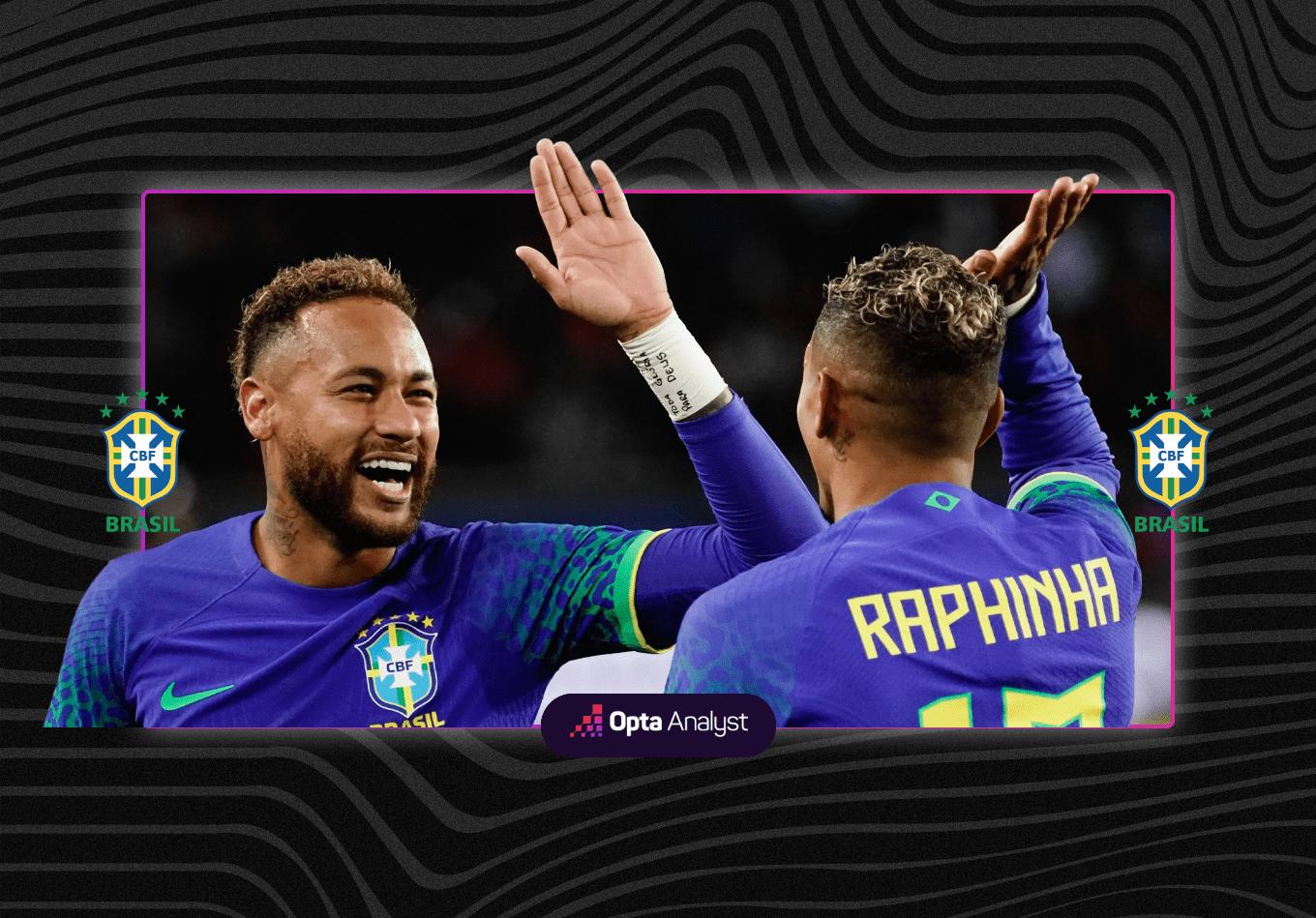 Mapping out Brazil’s Potential Route to the World Cup Final

What if Brazil’s preparation for the 2006 World Cup in Germany had been more intense? What if Felipe Melo hadn’t received a red card in 2010? What if Neymar hadn’t been injured ahead of the semi-final in 2014? What if Thibaut Courtois hadn’t saved that shot from Renato Augusto in 2018?

Brazil supporters are always looking back at the past, imagining a scenario where the Seleção have already won their sixth World Cup title.

But now, with the help of our tournament simulator model, we can estimate the probabilities of the “Hexa” happening in Qatar 2022.

Let’s kick off with the group stages. Brazil, as one of the eight teams from Pot 1, were drawn as the top seed into Group G, alongside Cameroon, Serbia and Switzerland. Those opponents shouldn’t be a threat, and the supercomputer agrees.

The machine gives Brazil a 67.6% chance of topping Group G, and a very generous 88.5% chance of progressing through to the knockout stages. Such is Brazil’s estimated superiority in Group G, that only Argentina (69.3%) have a better chance than them of topping their group.

The supercomputer reckons Switzerland and Serbia will be left to fight for second place in the group. In Russia in 2018, those two countries were also in Brazil’s group and on that occasion, the Swiss progressed to the round of 16.

Assuming reality follows what the numbers suggest and Brazil do top their group, it will be a positive indication they are on the right path to the title. Since the introduction of a round of 16 stage at the 1986 FIFA World Cup, the winner of every World Cup has always won its group.

The winners of Group G play the runners-up in Group H. Portugal and Uruguay are the favourites to progress in that group, with South Korea and Ghana having less than a 30% chance of going through to the round of 16. Between those two, our model gives Portugal a significant edge, which would put Uruguay in line to face the Brazilians next…

Facing a South American nation in the round of 16 may be good news for Brazil. Tite’s side finished their qualifying campaign unbeaten (W14 D3), defeating Uruguay on both times they met: 2-0 away and 4-1 at home.

However, things have changed. Brazil won both those matches against Uruguay when Óscar Tábarez was their coach. After Diego Alonso took over the mantle, his side won their last four matches in the qualifiers to secure their spot in Qatar.

A round of 16 tie against Uruguay will probably bring back some drama from the Maracanazo in 1950, although Brazil have since defeated the Celeste in the semi-final of World Cup 1970 before winning their third title against Italy.

Should Tite maintain his perfect record against Uruguay (W4) in charge of Brazil, their opponent in the quarter-finals will be…

Brazil’s quarter-final opponents will be either the winners of Group E or the runners-up in Group F.

Spain are slightly favoured against Germany to top Group E, while the runners-up in Group F will be Croatia, according to our supercomputer, with Belgium topping that one.

Although Croatia were beaten finalists four years ago against France, the numbers give the edge to Spain in their hypothetical encounter, meaning that La Roja would be Brazil’s quarter-final opponent. The clash would be the sixth between Spain and Brazil in World Cup history, with Brazil only playing Sweden (seven times) more often than Spain.

Brazil’s last competitive game against Spain was the 3-0 victory in the 2013 Confederations Cup final. That win against the then-World Cup and European champions sent Brazilians’ hope of a 2014 World Cup triumph on home soil soaring.  But, as we all know, that dream did not have a happy ending.

However, 2014 was also the last time that Brazil reached the semi-finals of the World Cup. After three consecutive finals between 1994 and 2002, it’s the closest Brazil have got to winning the title since.

Spain and Brazil last met in the World Cup back in 1986. Brazil defeated Spain 1-0 in the first round of the group stage, but both teams progressed to the round of 16, and both were eliminated in a penalty shootout in the quarter-finals that year.

After performing below expectations in the last two World Cups, Spain will be keen to eliminate Brazil, but we’re mapping the route of the five-time world champions here, and Tite’s men will progress to the semi-final stage, where they’ll face…

The supercomputer projects another South American rival will stand in the way of Brazil’s route to glory. According to the numbers, Brazil will face their neighbours Argentina in the semi-finals.

In Group C, Argentina have the highest chance of any side to progress from the group stages (90.2%) according to our model. It’ll be a relief for them, as the runners-up in that group likely face current champions France in the last 16.

By topping their group, Argentina would then face Denmark, the predicted runners-up in Group D. In the quarter-finals, their battle would be against the Netherlands from Group A, who would have eliminated the USA in the first round of the knockouts. USA are projected to finish second in Group B, ahead of Wales and Iran.

Argentina arrive at the World Cup on the back of a 35-game unbeaten run (W24 D11), the longest in their history. In fact, their last defeat came at the hands of Brazil, a 2-0 loss in the 2019 Copa América semi-final.

Brazil and Argentina first met in the World Cup in 1974, with Brazil winning 2-1. After their first encounter, they met again in the following two tournaments at the group-stage level: drawing 0-0 in 1978 and Brazil winning 3-1 in 1982. Argentina’s only victory against the Seleção came in their only knockout clash: a 1-0 win in the round of 16 in 1990.

In some ways, this match should be the final. According to our model, these are the two strongest World Cup squads in the tournament and are ranked first and second in terms of their chances of winning the whole thing.

It would promise to be an epic encounter. But win that, and the final of the 2022 World Cup would be a replay of 1998. That means…

On 18 December 2022 in Lusail, the Seleção will walk out against the current holders France. After a painful defeat in 1998 that gave France their first World Cup title, Brazil would have the chance to avenge their former manager Mário Zagallo.

Les Bleus will likely have to face Mexico in the last 16, before two all-European contests in the next two rounds. Their quarter-final opponent could be England (projected to knockout Senegal) and the semi-final would be a titanic clash against four-time winners Germany.

France are Brazil’s kryptonite in the World Cup. After being eliminated by the Brazilians in the 1958 semi-final, they’ve got their revenge on three separate occasions. Besides winning the 1998 title against Brazil in the final, Les Bleus knocked the Seleção out of the World Cup in 1986 and in 2006, both times in the quarter-finals.

Only four teams have defeated Brazil more than once in World Cup history, and France are one of them, alongside Hungary (x2), Italy (x2) and Netherlands (x3). But, as detailed in the graphic above, the supercomputer thinks 2022 is Brazil’s time.

According to our model, France have an 11.9% chance of winning their second title in a row. It’s the third-highest percentage of any team, but Brazil rank higher. The Seleção are favourites to win in Qatar, with the model giving them a 16.2% chance of lifting the trophy.

Brazil won the first World Cup played in Asia and according to our model, they will win the second. Twenty years after Ronaldo scored twice against Germany in Japan, who will be the Brazilian hero at the World Cup 2022 in Qatar?