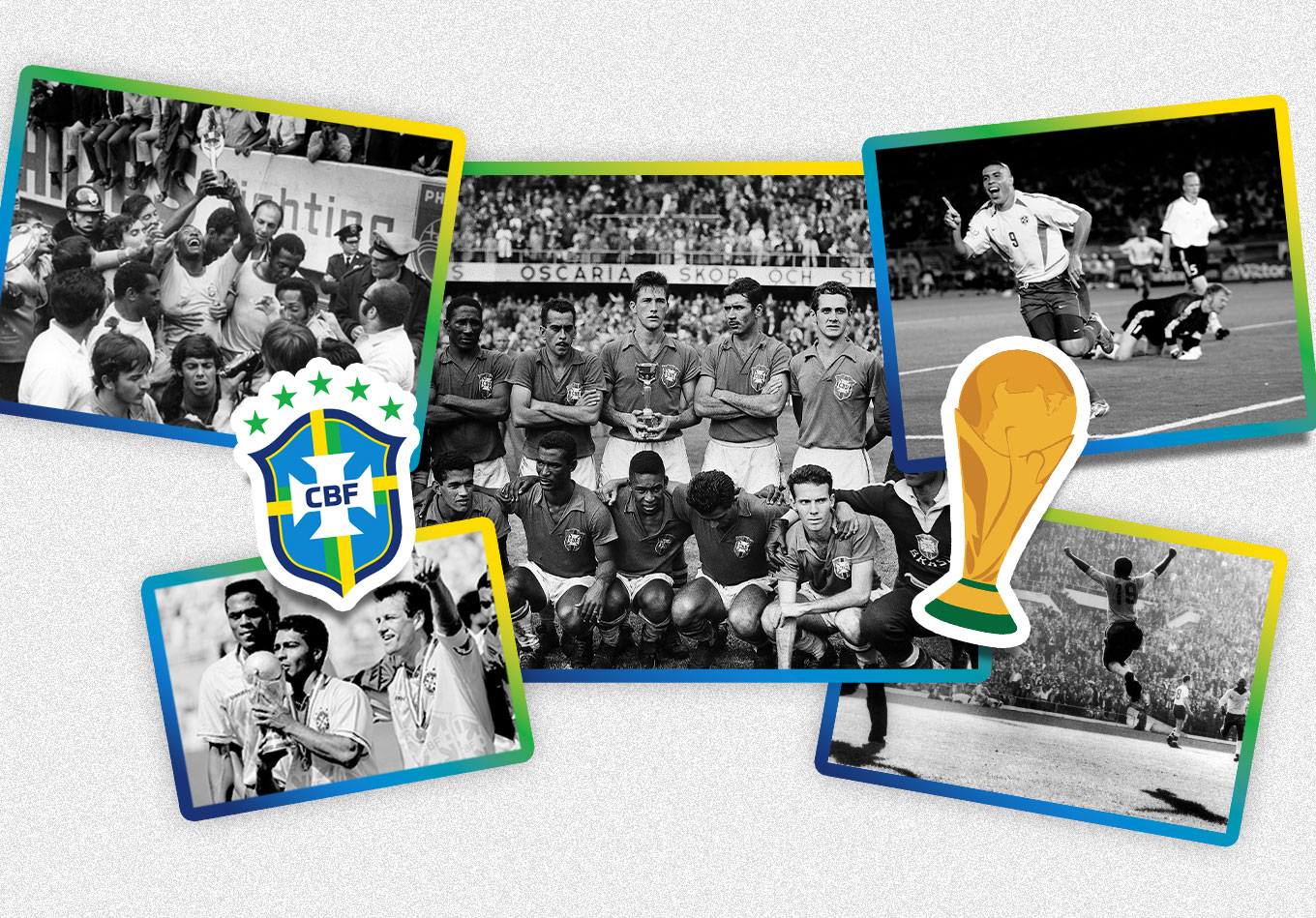 Brazil have won more men’s FIFA World Cup titles than any other nation, with their five victories between 1958 and 2002. We look back at each of those five World Cup wins by analysing the data.

The World’s Introduction to Pelé

The 1958 World Cup saw Brazil win the first of their five men’s World Cup titles, winning in the final against host nation Sweden 5-2.

France’s Just Fontaine may have ended the tournament as top scorer with an exceptional 13 goals – the record tally in a single World Cup finals – but Brazilian teenager Pelé grabbed the headlines.

Arriving in Sweden with an injury, it took until the third match of Brazil’s tournament for him to be unleashed onto the world scene, as a 17-year-old. In scoring the only goal in Brazil’s 1-0 victory over Wales in the quarter-finals, Pelé became the youngest goalscorer in men’s FIFA World Cup history at 17 years and 239 days old – a record that still stands to this day.

Not content with that record, his hat-trick in the semi-final win over France means he’s still the youngest player to score a hat-trick in a men’s World Cup (17 years, 244 days) and he then followed this up by becoming the only player aged under 19 years old to score in a World Cup final with his two strikes against Sweden (17 years, 249 days old).

Voted as the best young player in the tournament, the world awaited to see how Pelé might further impact future World Cup tournaments…

The Brazil star began the tournament as he finished the last, scoring and assisting in the opening game victory over Mexico, but he was to suffer an injury in the next match versus Czechoslovakia and play no further part in Brazil’s success.

Garrincha and Vavá scored four goals each, with those eight goals helping to fire Brazil to victory in 1962 – the last team to ever win back-to-back World Cup titles.

Their 3-1 victory in the final against Czechoslovakia saw them come from behind thanks to goals from Amarildo, Zito and Vavá.

The 1970 Brazil side were something special. They came into the World Cup in Mexico with six wins from six in qualification and followed this up by winning every single game at the 1970 tournament – the only nation to do this since the 1930s. They scored 3.2 goals per game, with the only team to average more in a men’s World Cup being Hungary in 1982, whose average was boosted by the freak 10-1 win over El Salvador.

Mário Zagallo became the first man to win the trophy as a player (in 1958 and 1962) and then as coach, with arguably his key player being forward Jairzinho, who scored in all six matches and became the only player to net in every single round at the World Cup finals.

Whist Jairzinho won the plaudits for his goalscoring, Pelé was once again instrumental in Brazil’s success.

Pelé assisted six goals at the 1970 World Cup – a record by a single player since detailed data exists (1966 onwards). He also created 28 chances in total, 27 from open play – only Johan Cruyff (29) in 1974 has created more in a single tournament since 1970, having played a game more.

Pelé scored four goals with those six assists and was the second-most prolific player measured by attacking contribution at the 1970 World Cup when combining expected goals and expected assists per 90 minutes. He was narrowly behind Gerd Müller (who scored 10 goals), but those two are way out ahead of anyone else in the tournament for that xG and xA combination:

Pele’s sixth and final assist at the 1970 World Cup came for Carlos Alberto’s memorable goal in the final to cap off the 4-1 victory over Italy. That goal consisted of nine uninterrupted passes by the Brazilians, which was a common theme for them across the entire finals – no side averaged more open play passing sequences of 10 or more passes than Brazil did in the 1970 tournament (5.2 per game).

With this being Brazil’s third men’s World Cup success, they were allowed to permanently keep the Jules Rimet Trophy, with the new trophy coming for the 1974 tournament.

Brazil’s penalty shootout victory over Italy in the 1994 World Cup final in the United States ended a 24-year wait for another World Cup win. This was their fourth men’s World Cup success following five tournaments where they didn’t make it past the semi-final stage.

Diminutive forward Romario (five goals), aiding by his strike partner Bebeto (three goals) fired Brazil to glory in this tournament, but neither were able to find a way past the experienced and respected Italian defence in the final, neither in 90 minutes nor in extra time. The 0-0 draw was deemed one of the worst World Cup finals in memory for entertainment, but the Brazilian’s prevailed in the penalty shootout, 3-2, following Roberto Baggio’s infamous miss. This would be the first-ever World Cup final to be decided by a shootout.

This wasn’t the most prolific Brazilian side, nor was it the leakiest in defence. They scored just 11 goals in their seven games in 1994 (1.57 per game), which was the lowest average for a World Cup-winning side ever until Spain outdid them with eight goals on the way to winning the 2010 title. They only conceded three goals in their 11 games in 1994, however, which at the time was the lowest goals against average for a winning nation – beaten by three teams since (France in 1998, Italy in 2006 and Spain in 2010).

Brazil were favourites for the 1998 men’s World Cup with star striker Ronaldo tipped to set the world alight at the tournament in France. A controversial pre-match decision to leave Ronaldo out of the starting line-up, which was then changed to include him (still, nobody knows the true story) marred their preparations that year, as they were thrashed 3-0 by the hosts in the final in Paris and ended as runners-up. He still won the Golden Ball award that year – not bad considering it was the first World Cup that he played in, but he still would have been disappointed not to win the trophy with Brazil.

Fast-forward four years, and both Brazil and Ronaldo have some ghosts to exorcise. “R9” certainly did that, finishing as the 2002 Golden Boot winner with eight goals in eight appearances, including both strikes in the 2-0 final victory over Germany in Yokohama in which he won the man of the match award. Forming a lethal attack for his national team alongside Rivaldo and Ronaldinho, Brazil’s success in the tournament never looked in doubt.

The most impressive aspect of Ronaldo’s performances in 2002 was that he spent a long spell out injured prior to the tournament following a cruciate ligament rupture two years before the finals, meaning his missed Brazil’s entire South American qualifying campaign for the 2002 World Cup.

Ronaldo went on to reach 15 goals at the World Cup – a record until 2014, when German striker Miroslav Klose overtook him in the rankings, ironically in that remarkable semi-final thrashing of Brazil – with Ronaldo sitting in the stands watching on.