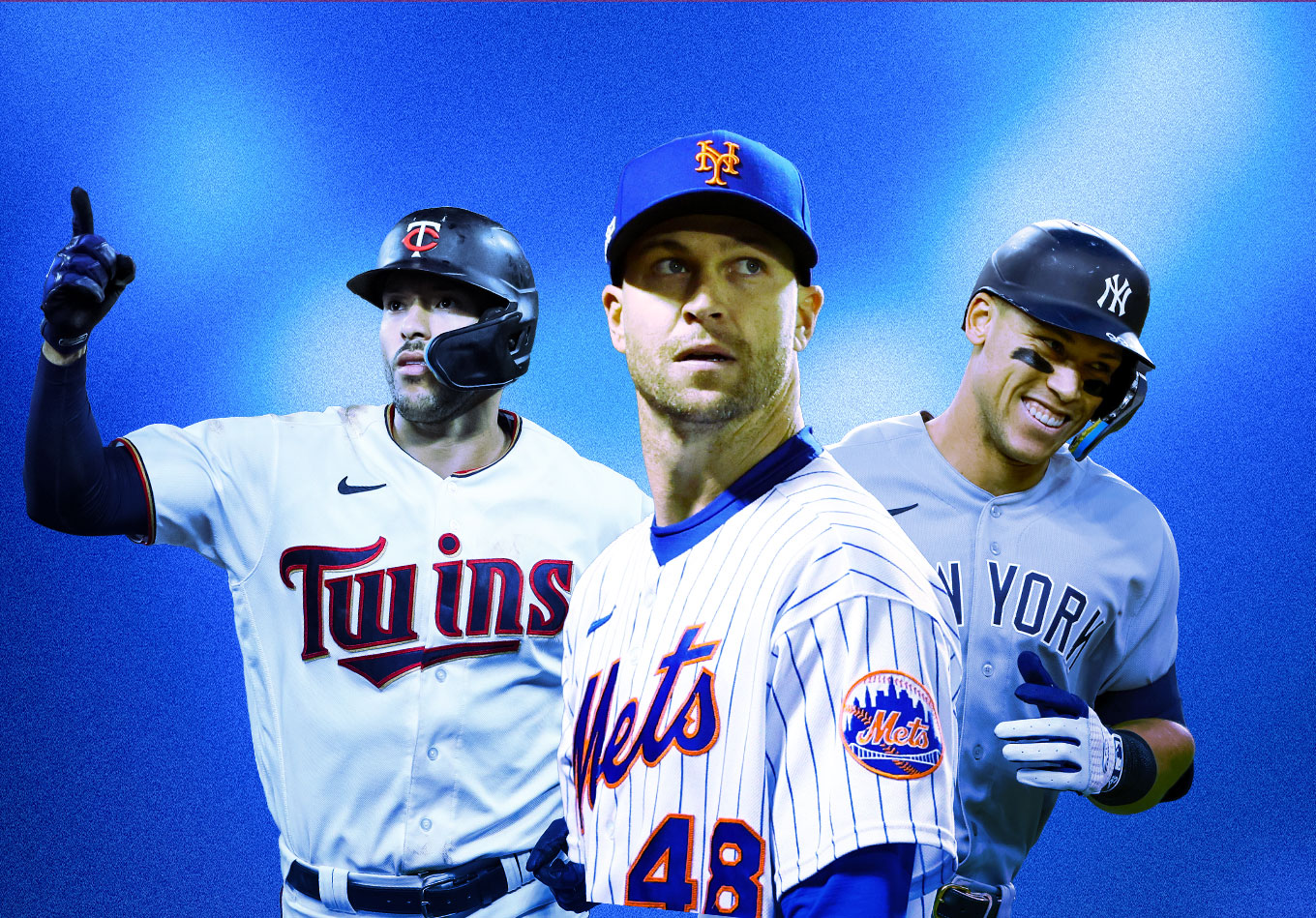 The reports are flying around at a dizzying pace during what amounts to the thick of Major League Baseball’s hot stove season.

But only a handful of notable players have signed major league contracts since free agency began earlier this month. That could change when the winter meetings begin on Dec. 4 in San Diego.

“A lot of stuff doesn’t kick in until the winter meetings in December,” Aaron Judge, the biggest free agent on the market this offseason, told the New York Post.

Earlier this month, we took you through each team’s needs heading into free agency. Now we’re ranking the top free agents available by position based on raw value+ and catchers’ framing runs for position players and raw value- and whiff+ for pitchers.

Raw value examines performance on a per-pitch basis, rather than just looking at the outcome of each at-bat. It encompasses plate discipline, quality of contact, and more. For this metric (RV+ for hitters, RV- for pitchers), 100 is considered league-average performance. For hurlers, lower is better, and the opposite is true for batters.

Whiff+ examines a pitcher’s ability to dominate by generating swings and misses (and strikeouts) with his stuff. It’s a rate stat, and 100 is considered a league average whiff+.

Big names like Judge may be the focus of most reports and headlines, but that doesn’t necessarily mean they’re the best players at their respective positions. Our data-driven list of the best free agents based on 2022 raw value starts behind the plate.

Willson Contreras ranked 111th out of 120 catchers in MLB with minus-9.2 framing runs in 2022. We equate this to him costing the Chicago Cubs over nine runs on the season due to his poor pitch framing. If robot umpires weren’t set to be implemented after next season, we might take that data a little more seriously.

Instead, we can’t ignore the huge difference between Contreras’ 124 RV+ and the next-best catcher – Gary Sánchez at 110. In fact, only three of the 21 free-agent backstops on our list had an above-average RV+ in 2022. Luke Maile, meanwhile, has signed with the Cincinnati Reds.

The market for first basemen is open and appears to be selling out quickly. The top three in our rankings are reportedly already gone after Anthony Rizzo inked a two-year deal to remain with the New York Yankees, Carlos Santana signed a one-year contract with the Pittsburgh Pirates and José Abreu has reportedly coming to terms on a surprisingly big three-year deal ($58.5 million) with the defending World Series champion Houston Astros.

The pickings are slim for those in need of a second baseman with none of the 11 players listed finishing with an RV+ above the league average. Jean Segura tops the position after posting a .277 batting average with little pop (10 home runs, nine doubles and 33 RBIs) in 2022. He also hit just .214 with two extra-base hits during the team’s run to the NL pennant.

It wouldn’t be surprising to see someone take a chance on Adam Frazier. He batted .305 with five homers and 36 doubles while making the All-Star team in 2021 with the Pittsburgh Pirates and Padres before falling off to .238 with three home runs and 22 doubles with the Seattle Mariners this season.

Much of the offseason narrative surrounds the elite shortstop free-agent class that includes Carlos Correa, Trea Turner, Dansby Swanson and Xander Bogaerts. There’s clearly a huge dropoff from there, leaving shortstop-needy teams that miss out on the top four in a real bind. Elvis Andrus, 34, is the only other player on the list with an RV+ above the league average.

Defensively, Swanson was second in the majors in fielding percentage, while Bogaerts was the best of the big four in zone rating (third in MLB at .830) and range factor per game (fourth at 3.91).

Nolan Arenado opting into his deal with the St. Louis Cardinals made this group a little thinner. And how weird is it going to be to see Justin Turner in another uniform after he hit .296 with 156 home runs over the past nine seasons with the Los Angeles Dodgers? At age 38, he tops our list of third basemen after posting a 128 RV+ in 2022.

Brandon Drury should be an attractive option for needy teams after he hit .263 with 28 home runs for the Reds and Padres last season. And he’s much younger than the other third basemen on this list (Turner, Evan Longoria and Donovan Solano) who finished with an RV+ above league average. Jeimer Candelario is off the board, signing a one-year deal with the Nationals.

After hitting .274 with 23 home runs and 70 RBIs while earning All-Star honors for the first time since 2015, Joc Pederson opted to take the one-year, $19.65 million qualifying offer from the San Francisco Giants. That takes the player easily No. 1 on the left field list away, leaving just four others who finished with a RV+ above the MLB average (Andrew Benintendi, AJ Pollock, Jurickson Profar, Tommy Pham).

Don’t sleep on Joey Gallo now that the league has banned the shift for next season. According to our study back in August, Gallo has been one of the players most impacted by the shift and he could see his average make a substantial jump in 2023.

There’s only one center fielder who posted an RV+ above the league average in 2022. And Brandon Nimmo has been at the center of the hot-stove discussion when the position comes up. Nimmo is incredibly patient at the plate, finishing fourth in the majors with a 125 discipline+, which measures a hitter’s ability to swing at strikes and lay off balls. He also had a contact+ above the league average (101).

Just three seasons removed from an MVP season in which he hit .305 with a career-high 47 home runs, Cody Bellinger is an intriguing possibility for a team that believes it can get the slugger back to his 2019 form. Bellinger, who can also play first base, batted just .210 with 19 homers in 144 games last season.

Aaron Judge put up an RV+ more than twice the league average during a magical season in which he batted .311 with an AL-record 62 home runs and 131 RBIs. He also finished with a BIP+, which measures the damage done by a player upon making contact, almost three times the league average at 299 and a 116 discipline+ that ranked 16th in the majors. Let the bidding war begin.

Mitch Haniger could be a solid consolation prize for a club in need of an outfielder. Michael Conforto’s 120 RV+ was from 2021 after he missed all of last season due to a shoulder injury. Former Reds slugger Aristides Aquino is off the board, signing with the NPB’s Chunichi Dragons.

There are opportunities for good buys here with nine players finishing with above-average RV+ numbers in 2022. Michael Brantley led the group, but he only played in 64 games after injuring a right shoulder in June that needed surgery. Teams could do worse than Brantley, who is a career .298 hitter over a 14-year career.

With Clayton Kershaw reportedly set to return to the Dodgers, Jacob deGrom, AL Cy Young winner Justin Verlander and Carlos Rodón are the headliners of the starting pitching market. Zach Eflin pitched well down the stretch with a 2.45 ERA over 18.1 innings in 17 appearances (including the playoffs) after the Philadelphia Phillies moved him into the bullpen, so it should be interesting to see what role teams see him in next season.

After enjoying a career year with a 15-5 record and a 2.57 ERA with the Dodgers, Tyler Anderson inked a three-year deal with the Los Angeles Angels. Martín Pérez, who had a 2.89 ERA in 32 starts, is also off the market after accepting the qualifying offer from the Texas Rangers. According to reports, Mike Clevinger has returned to the AL Central by signing a one-year contract with the Chicago White Sox. Noah Syndergaard could be an interesting pickup after helping the Phillies get to the World Series.

Edwin Diaz was the true No. 1 reliever on the free-agent market after posting the best RV- and whiff+ (by far) on this list among those with at least 20 innings. But he’s already re-upped with the New York Mets on a five-year deal. Kenley Jansen’s metrics with the Atlanta Braves last year prove he can still help a contender in the back end of the bullpen. Rafael Montero is set to return to the Astros after playing a key role in their postseason run.

The data for Alex Reyes, Luke Jackson, Danny Duffy, Will Harris and Josh James is from 2021 after they missed last season due to injury. Some notable free agents beyond the top 50 in RV- include Aroldis Chapman (103), Brad Hand (111), Wily Peralta (114) and Zack Britton (268).