The Yays and Nays: Our Week 7 Fantasy Football Rankings, Projections and Top Plays | The Analyst 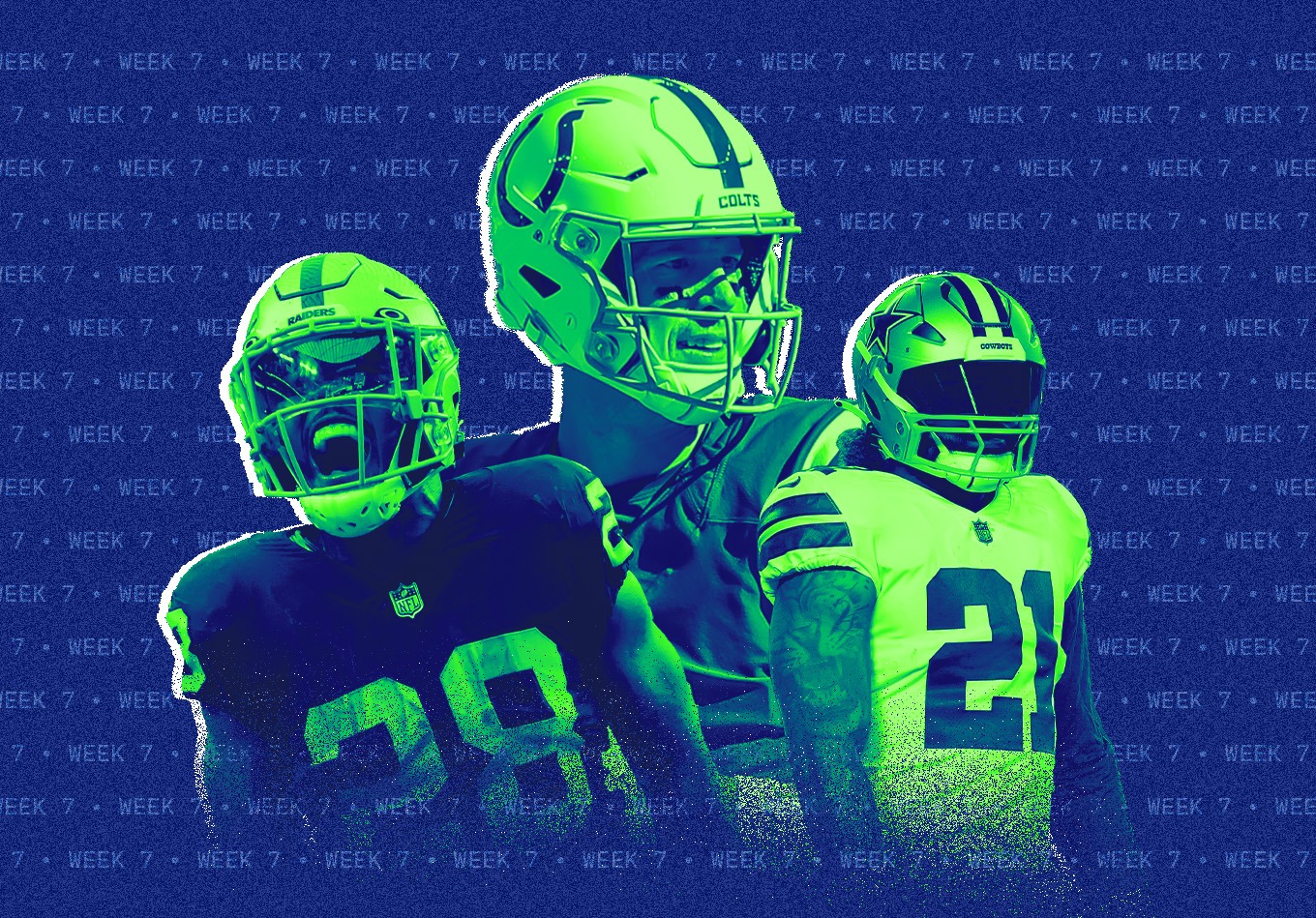 The Yays and Nays: Our Week 7 Fantasy Football Rankings, Projections and Top Plays

National Tight End Day is Sunday, so let’s highlight a few players that deserve some of the spotlight, starting with a rookie coming off his NFL debut on Monday Night Football.

Greg Dulcich take a bow! The rookie out of UCLA was the surprise offensive star of the night. It certainly wasn’t Russell Wilson or Melvin Gordon. Dulcich played 71% of his team’s snaps and caught the only touchdown for the Denver Broncos.

His offensive involvement was at such a high rate last week, that our model is ranking him as TE10 for this week against fellow rookie Breece Hall and the New York Jets, even though his ECR is 22nd. He is an intriguing pickup for those of you with Dallas Goedert or Tyler Higbee as your starting tight ends.

Mike Gesicki had the performance of the week at the position, scoring two touchdowns and finishing with 24.9 fantasy points. He already has more touchdowns than he did all of last season. Let’s see if he can keep up the momentum with Tua Tagovailoa ready to return on Sunday night against the Pittsburgh Steelers.

Robert Tonyan became the second tight end to record 10 receptions in a game this season – Los Angeles Rams tight end Tyler Higbee was the other – as Aaron Rodgers looked for him early and often in the Green Bay Packers’ Week 6 loss. His 10 receptions and 12 targets were both career highs and with Randall Cobb out due to injury, more games like this could be forthcoming for Tonyan.

Kyle Pitts scored his first touchdown of the season, connecting with Marcus Mariota. Our algorithms are higher on him this week than they’ve been in any other this season. The Atlanta Falcons tight end enters this week as TE6, facing Joe Burrow and the Cincinnati Bengals.

Dalton Schultz finished third among tight ends in receptions last season for the Dallas Cowboys. He’s had to battle through injury and a seemingly weak connection with Cooper Rush, but with Dak Prescott coming back, look for Schultz to vault himself right back into a solid TE1.

Zach Ertz, meanwhile, is third in tight end receptions this season. He finished fourth last season. He isn’t flashy, but he is one of the steadiest options at the position each week. Along with Schultz, Austin Hooper and Colby Parkinson, Stanford may stake their claim to be the best college at producing tight ends.

T.J. Hockenson, of course, would beg to disagree as he leads a strong contingent of tight ends out of Iowa. His Week 4 eruption that included two touchdown catches from Jared Goff and ended with 39.9 PPR points was the best fantasy performance by a tight end since Week 15 of last season.

Of course, we’d be remiss if we didn’t mention the three superstars of the position.

Andrews and Lamar Jackson connected seven times for 106 yards and a score in last week’s surprising loss to the now 5-1 Daniel Jones-led New York Giants. Andrews was the only Baltimore Ravens player to record more than 30 yards receiving.

Finally, to celebrate the tight end position, there is an exciting matchup this Sunday, between Patrick Mahomes and the Kansas City Chiefs and Jimmy Garoppolo and the San Francisco 49ers. But you can be sure those two won’t be the headliners of the weekend. Instead, it’ll be all about Travis Kelce and George Kittle, two of the most infectious personalities in the NFL.

Since Kittle’s rookie year in 2017, those two lead all tight ends in receiving yards, catches of 25 yards or more, and yards after the catch. And between the two stars during that time frame, they have accounted for seven of the nine All-Pro honors awarded.

Those three remain the class of the position. Let’s see if they can’t make our projections look good and finish 1-2-3, culminating what is sure to be a fun week celebrating the tight end position.

As always, let’s jump around and evaluate some Week 7 projections gathered from some of the top data-driven projections available using our AI-powered model. Refer back to our fantasy football rankings for any questionable waiver wire or lineup decisions.

Note: We’re comparing our rankings to the expert consensus rankings (ECR) from FantasyPros. These rankings update throughout the week (We pulled these numbers from Thursday). Once again, we are using PPR unless noted otherwise.

And you know what, this week he’s facing a Tennessee Titans team that is last in the NFL in net passing yards allowed per game. Even better than that? The Titans have allowed multiple passing touchdowns in every game this season and back in Week 4, Ryan and the Colts torched Tennessee to the tune of 356 passing yards and two touchdowns.

This week, our model is projecting Ryan for the third-most passing attempts. He’s a solid bet to be a top-10 quarterback this week.

That’s right, in a week in which stars like Austin Ekeler, Jonathan Taylor, Christian McCaffrey and Saquon Barkley are all playing, it’s Jacobs that holds the top spot in our model’s fantasy football rankings this week, just ahead of Rhamondre Stevenson of the New England Patriots.

Back in the preseason, our model was skeptical of Jacobs and this is what we wrote:

Despite our projections being bullish on Jacobs’ chances of recording 1,000 rushing yards, the additions of rookie Zamir White and especially pass-catching specialist Ameer Abdullah will likely eat into Jacobs pass-catching volume, resulting in a precipitous drop in our rankings.

Needless to say, the backfield distribution has gone in the exact opposite direction. White and Abdullah have combined for one catch this season and Jacobs has recorded five receptions in three straight games. He’s also well on his way to 1,000 rushing yards – ranking third in the NFL despite already having had his bye week.

If you took a chance on Jacobs on draft day, congratulations. He’s an elite running back option the rest of the season and he’s our top back this week.

The Los Angeles Chargers and Denver Broncos engaged in a game that, well, let’s just say wasn’t pretty. Nothing encapsulates that game better than this tweet.

Lost in the shuffle, was that Palmer led all Chargers wide receivers in targets (12) and receptions (nine). It was his third game this season with at least eight targets and in his career, when he sees at least eight targets, he averages 14.5 points per game. And oh yeah, Palmer scored 14.7 PPR points last week on his way to a weekly finish of WR23.

This week, facing a Seattle Seahawks team that ranks 30th in yards allowed per play and 31st in time of possession, Palmer, Justin Herbert and the Chargers will be on the field with plenty of opportunities. With those additional opportunities, our model is optimistic that Palmer can have a second straight week finishing inside the top 25. He’s a solid WR3.

Did you know that in the five games that Jones has played this season, Trevor Lawrence has targeted him more than Christian Kirk? Our model certainly knows, and it helps explain why Jones is our highest rated Jacksonville Jaguars receiver this week.

Jones also leads the Jags in catches, despite having already missed a game this season. The big difference between Kirk and Jones is Kirk’s four touchdown receptions. Well, down in the low-end WR2 tier, players with a higher floor are safer starts and Jones, with at least five catches in three of his last five games, has a higher floor than Kirk, who has only caught seven total passes the last three weeks.

He won’t blow you away with a top-notch fantasy output, but he’s a good bet to have more receptions and yards than anyone else on his team. As long as Marvin Jones Jr. remains out, Jones, like Palmer, is a player worth potentially starting this week.

Like Ryan, the passing volume has been there in spades for Murray. Murray ranks third in the NFL in passing attempts. However, he ranks dead last in yards per attempt.

As a result, Murray is only 14th in the NFL in passing yards per game. On top of that, he’s only thrown five touchdown passes – fewest among quarterbacks with at least 200 attempts. And for the cherry on top, Murray’s top target this season, Marquise Brown, a player who caught three of Murray’s five TDs, is out indefinitely with a foot injury.

Yes, he gets DeAndre Hopkins back and still has Rondale Moore. But with a matchup against a strong Saints defense that’s only allowed one 300-yard passer in its last 14 games, Murray is only a fringe QB1 this week.

For the second time in three weeks, Elliott finds himself on our Nay list. That’s despite having his most productive outing of the season last week in primetime against the Philadelphia Eagles.

The breakdown of Zeke is simple: When he scores a touchdown, he finishes as a top-20 back. When he doesn’t, he averages 7.4 PPR points per game. And the simple truth of the matter is that he shares a backfield with a running back who is better than he is.

Luckily for Zeke fantasy managers, he’s facing a Detroit Lions defense that is last in rushing yards allowed per game and 31st in rushing touchdowns allowed. However, our model prefers running backs who don’t rely on touchdowns for most of their fantasy scoring. Even with Dak coming back this week, Zeke is a risky RB2 this week.

Geno Smith has been nothing short of brilliant for the Seattle Seahawks. He ranks first in well-thrown percentage (87.4) and completion percentage (75.8), and has the Seahawks offense humming to the tune of the second-most yards per play (6.23).

And yet, that success hasn’t quite translated over to Metcalf. A third of the way through the season, Metcalf has only recorded one top-12 finish and not coincidentally, that performance was also Metcalf’s only game so far with more than 90 yards receiving.

If you’re going to choose a Seahawks wide receiver this week, our model prefers Tyler Lockett, even though he’s projected to have fewer targets than Metcalf. It’s a horrible week for byes, with Cooper Kupp, Justin Jefferson and Stefon Diggs all off, so you’re likely starting Metcalf if you have him. But there’s major risk in starting a player who has had less than 40 receiving yards in half his games.

Remember when Samuel was WR8 through two weeks? He had 42.1 points and was looking like a potential breakout fantasy star. Since then, Samuel has scored just 35.7 fantasy points.

Taylor Heinicke takes over at quarterback for the Washington Commanders this week and immediately faces a tough test, squaring off against a Packers defense that is looking to replicate its effort from Week 3 when they only allowed 12 points to Tom Brady and the Tampa Bay Buccaneers.

The Packers, with their backfield duo of Aaron Jones and AJ Dillon, will likely keep Washington possessions to a minimum in this game. Samuel has accounted for only 12 receptions in his last three games, including just two against the Chicago Bears last time out. Our model thinks that trend is likely to continue. Only start him if you must, but it’s likely better options exist.