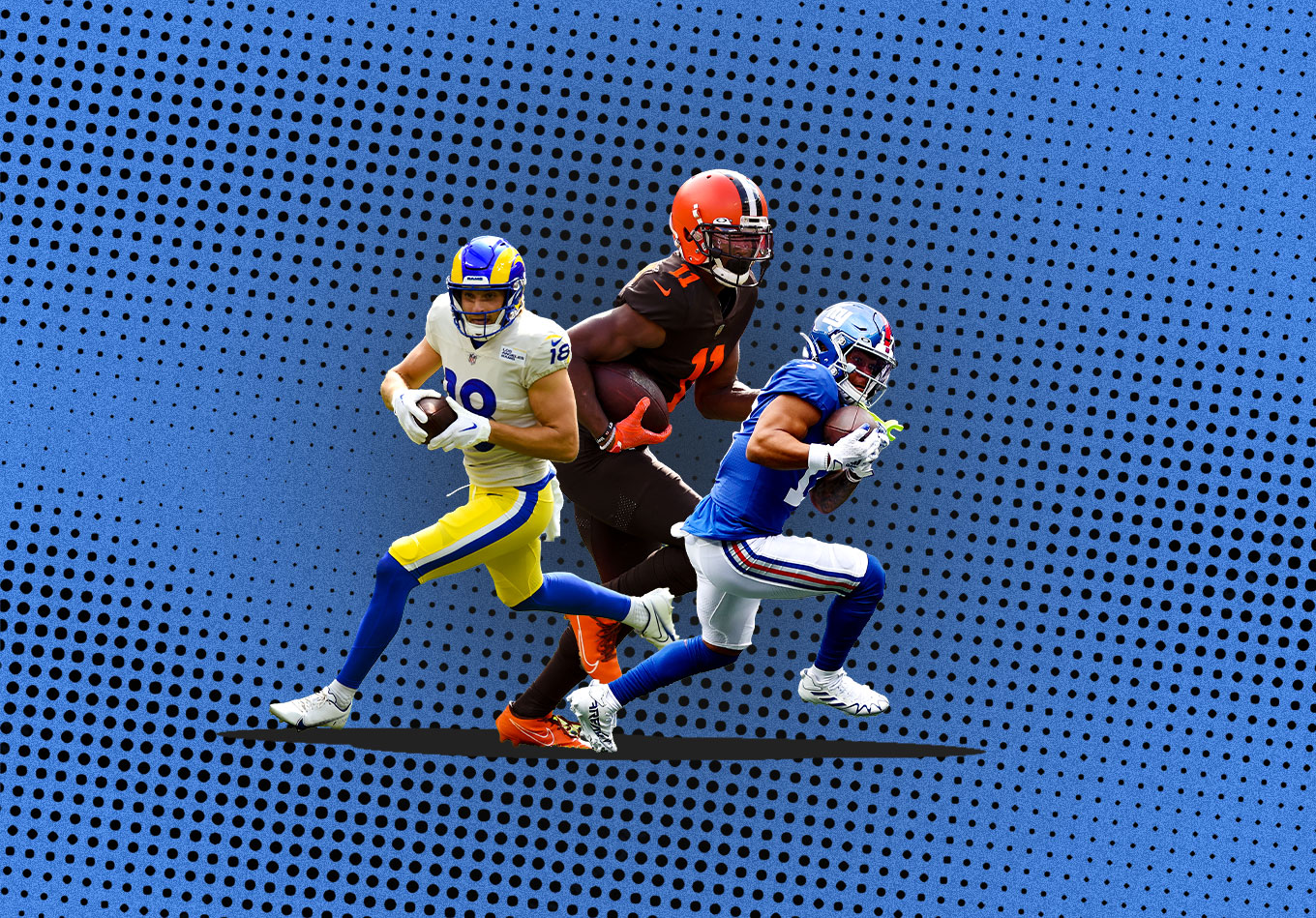 The pickings are slim on the NFL waiver wire this week. Maybe we’ve solved fantasy football and nothing can surprise us anymore.

We know from experience this isn’t true. Injuries and byes happen and waiver wire pickups are more important now than ever.

There was a shake-up in Carolina after Robbie Anderson was seemingly ejected from the game by his own coach against the Los Angeles Rams. The Panthers promptly traded him to the Arizona Cardinals after news broke that Marquise Brown had suffered a potentially season-ending injury against the Seattle Seahawks. DeAndre Hopkins is coming back from his suspension and the Panthers are in rebuild mode. How this impacts both teams remains to be seen.

We have a chance to dive deeper into the stats this week and look at some matchups with the bye week taking four fantasy football darlings (Buffalo Bills, Minnesota Vikings, Rams, Philadelphia Eagles) out of contention for Week 7.

The Detroit Lions, Houston Texans, Las Vegas Raiders and Tennessee Titans all return from a bye week, fresh and ready to go. The NFL season moves fast but we did mention a few players from these teams in recent weeks who might be on the rise. Nico Collins and Josh Reynolds in particular.

This was a week of redemption rather than revelation. Most of the players who redeemed themselves are just above the threshold we set for ourselves (50.0% rostered), but they might be available in your league.

Allen Robinson II had his best game of the season for the Rams after many people had dropped him. He was 75.0% rostered in ESPN, but it was closer to 60% heading into Week 6. That will swing the other way after his 17.3 PPR performance against the Panthers.

Chase Claypool was dropped by 6.0% of fantasy owners heading into Week 6, but he finished with 23.4 fantasy points agains the Tampa Bay Buccaneers on Sunday. Now the Steelers face a Miami Dolphins team with something to prove this weekend. Our projections had him 19 places higher than industry consensus and continue to like Claypool on Sunday.

Patience was starting to run out with Brandon Aiyuk of the San Francisco 49ers, too, before he caught a couple of touchdown passes and had eight receptions from Jimmy Garropolo to finish as WR4 in Week 6.

We hope you listened to our advice from last week and picked up Alec Pierce, who won it for the Indianapolis Colts against the Jacksonville Jaguars with a 32-yard toss from Matt Ryan. Rondale Moore also had a big target day against the Seahawks, which very well could continue.

Drake had a big game in Week 6 after J.K. Dobbins’ knee stiffened up. Gus Edwards looks like he is ready to come back and could play a role. Through six weeks, Dobbins leads the backfield with 41 touches. Drake is second with 34 and Justice Hill has 23. This running back committee might never sort itself out.

But the Ravens play the Browns, who have given up the most rushing touchdowns this season (11). Our projections liked Drake in Week 6 (15 places higher than industry consensus) and he tied Breece Hall of the New York Jets with a league-best four runs of at least 10 yards. It looks like Drake’s job for now.

The Denver running back group is an uncertain one. Melvin Gordon III was supposed to step in and take the role of lead back, but Murray was the man Monday night against the Los Angeles Chargers. If you’re picking up Murray, be sure you’re aware of the risk involved.

Our fantasy projections liked Murray last week (19 places higher than the consensus) and he could be carving out a bigger role for in the offense. And with Russell Wilson nursing a shoulder injury, there might be plenty of carries to be dished out.

Murray, who also looked good earlier in the season with the New Orleans Saints, will next face the New York Jets, who have given up seven rushing touchdowns (tied for the fifth most this season).

Randall Cobb is out for a significant amount of time after hurting his ankle. And Tonyan is coming off his most productive day as a Packer with 10 catches for 90 yards. He finished with the third-most burns (seven) among tight ends behind just George Kittle (nine) and Mark Andrews (eight). He also led all tight ends with 130 burn yards. This performance has been coming.

Aaron Rodgers targeted Tonyan 12 times and he finished with 19 fantasy points in PPR leagues. Only Aaron Jones and A.J Dillon have more offensive touches than Tonyan for the Packers this season. He leads the Packers with 27 receptions, ahead of Romeo Doubs with 26 and Allen Lazard with 20.

The Washington Commanders, Green Bay’s next opponent, have given up 12 receiving touchdowns this season (tied for the second most in the league). It might be a good chance for Tonyan to add a touchdown to the volume we have seen recently.

It’s Skowronek’s second year in the league. He played in 14 games last season, starting just one. This season, he’s started all six for the Rams. Our rankings like Skowronek a lot, as the model had him 11 places higher than consensus going into Week 6. He delivered with a season-high 16.7 fantasy points (WR16).

There is a clear hierarchy when it comes to wide receivers: Cooper Kupp, Robinson and then Skowronek. But Skowronek actually has more offensive touches (24) than Robinson (17) and with Cam Akers, who is third on the Rams’ list with 53 offensive touches apparently out of the picture, it looks like Sean McVay might be getting the improving Skowronek the ball more.

Jackson’s 10 receptions were the most by a Colt running back since Joseph Addai caught 10 for 53 yards in 2009. No Colt RB has had more since Edgerrin James caught 11 for 83 yards in 2002. Considering it was Jackson’s first NFL start, that’s not bad.

Our model wasn’t surprised. We had Jackson as our RB30 this week, 10 places higher than industry consensus. Obviously, when Jonathan Taylor comes back he’ll assume starter duties, but Jackson has shown enough to at least spark a debate between himself and Nyheim Hines.

Jackson also had 79 burn yards in Week 6 – only Christian McCaffrey had a higher amount among running backs. We might be looking at the emergence of an elite pass-catching back (at least until Taylor returns).

Thirteen Giants have caught a pass this season. Going into the game against Baltimore Ravens, Robinson had just one catch for five yards. The Giants don’t have a single wide receiver inside the top 50 for receiving yards this season. You’ll have to go down to No. 68 before you encounter a Giant: Richie James with 189 after six games.

They are crying out for a steady pair of hands to help Daniel Jones and Saquon Barkley. Robinson had team highs of 12.83 burn yards per target and four burns on Sunday.

The Saints are struggling on offense with injuries to Michael Thomas, Chris Olave and Jarvis Landry. So it came down to Smith and Marquez Callaway fighting for Andy Dalton’s attention. We had Smith as our WR29 after the injury news. Smith had the more productive day and finished with three receptions for 43 yards and a touchdown.

Callaway had more targets with seven, but Smith finished the game with more receiving yards and the touchdown. On the season, Smith has nine catches for 176 yards, while Callaway has nine receptions for 98 yards.

We think Smith’s upside will remain even when Olave and the other receivers return.

The Falcons have run the ball 202 times, the second-highest total behind the Eagles. They have 165.2 yards per game, which is third in the league behind the Cleveland Browns and Chicago Bears. Huntley had a career-high 16 attempts against the 49ers on Sunday for 59 yards. His 11 carries in the red zone on the season lead the team and his 4.73 yards per attempt down there is second behind Cordarrelle Patterson’s 6.40. Only Saquon Barkley (seven) had more red zone carries than Huntley (six) in Week 6.

The problem with running this much is that everyone knows you’re running the ball. Huntley has faced a bad box on 57.1% of his 35 carries. That’s the eighth-highest bad box percentage among backs with at least 10 carries. Bad box percentage is the ratio of all snaps in which there are more defenders in the box than the offense has blockers.

Tyler Allgeier, on the other hand, has faced a bad box on just 41.4% of his 54 carries. Marcus Mariota is always a liable to take off on an RPO, which makes life easier, but it also means he takes some of the carries away.

Huntley’s red zone carries and his 5.5 yards per attempt in that area are worth consideration – especially during bye weeks.

This is a continuation on the theme that the 5-1 Giants don’t seem to have any stability at wide receiver. The only sure thing this season is Saquon Barkley. Bellinger is the most likely player to establish himself as a productive weekly member of the Giants receiving corps at this point – and even that’s no sure thing.

He has 16 offensive touches and three touchdowns (one rushing). His 259 offensive snaps are behind only Daniel Jones and Barkley among skill players. After only catching one pass in the first two weeks, Bellinger has caught 14 in the last four. He matched a season high with five targets on Sunday.

Peoples-Jones had a productive day with four catches for 74 yards on five targets in the Browns’ blowout loss to the Patriots. He’s now totaled 21 targets and 13 receptions for 195 yards in the last three games.

Peoples-Jones is third on the Browns in receptions behind Amari Cooper (31) and David Njoku (27). Peoples-Jones has 20 catches but he ranks second on the team in targets with 36 (Njoku has 35) and leads the Browns with 11.38 burn yards per target.