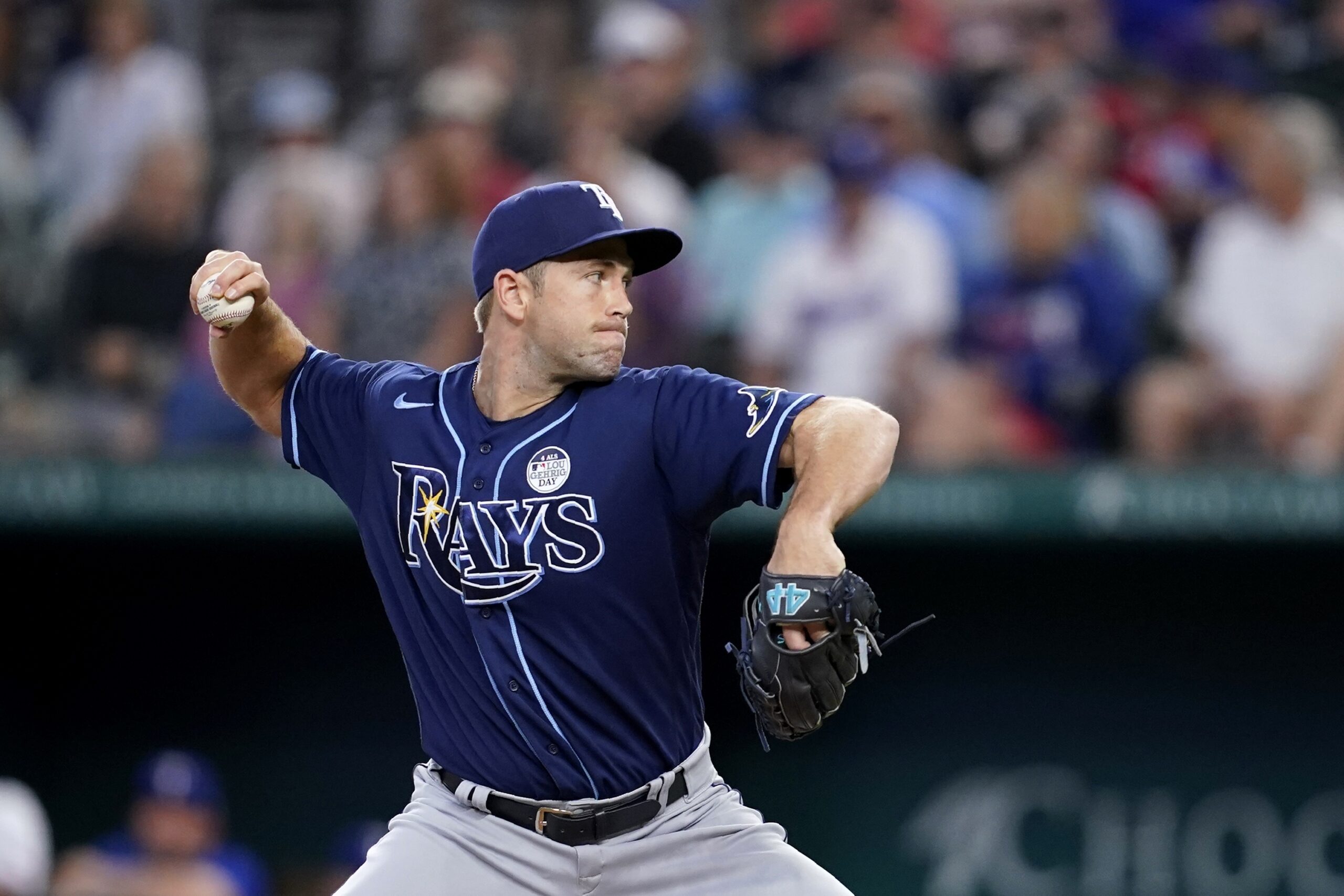 There are three types of organizations in MLB: those who focus on acquiring players from other franchises or via free agency, those who emphasize developing and improving their own, and the ones, like the Los Angeles Dodgers, who enjoy the best of both worlds.

The Tampa Bay Rays, especially with their payroll limitations, fall in the second group. They usually can’t afford the big fish in free agency, but if there’s a team capable of signing a journeyman to a minor league contract, working with him to completely re-design his stuff and making him successful, it’s them.

Enter Jason Adam. A fifth-round pick from 2010, the right-handed reliever was non-tendered by the rebuilding Chicago Cubs prior to the 2022 campaign. The Rays, savvy as they are, saw potential in him and extended a one-year deal to his agent.

However, that 5.91 ERA last year hid several things. For starters, it was over a short 10.2-inning sample. That was all he needed to strike out 19 hitters, and his FIP was a much better 3.32. The Rays saw the tools and got to work.

And boy, the results have been impressive. Adam has a minuscule 1.18 ERA and a 0.66 FIP in 53.1 frames with the Rays, and is now taking care of high-leverage situations in one of the best bullpens in the league. He has a 13/64 BB/K ratio, and has surrendered just two earned runs since the start of July while pitching in 24 games over that span.

What changed? What did the Rays do so well to build, or re-tool, one of the best relievers in baseball? As always, there is always a pitch mix change involved.

In the limited sample size of last year, he threw 57.3% fastballs, 20.6% sliders, 11.5% curveballs, and 10.6% changeups. This season, the Rays decided to ditch the curveball and feature his slider even more than his four-seamer.

He’s now basically a three-pitch pitcher: at 35.6%, the slider is now his go-to offering, and he now throws significantly more changeups (33.2%) and fewer fastballs (30.6%). The breaking balls are a piece of art:

Of course, the Rays overhauled his entire repertoire: his fastball has elite spin rate (2,693 rpm on his slider) and has increased about a mile per hour in velocity (he’s now throwing almost 94..8 mph on average).

The movement profile of his hard-breaking slider and changeup give him weapons against lefties and righties, and makes him virtually impossible to decipher. He also achieves long extension, making his pitches (particularly his fastball – at 6.7 feet) look faster for hitters.

Evidently, the Rays worked a lot to optimize Adam’s spin axis. It was done to get that famous “rising” effect on his fastball, which is pretty straight but with a lot of vertical “movement.” It doesn’t really “rise,” but appears about 10 inches higher than it “should” have been due to gravity.

His approach is also helping him succeed. Against left-handed batters, he throws the changeup (which is coming at hitters harder than ever, at 89.9 mph) quite a bit, at 54.1%. The pitch moves away from them (see above) and it’s quite effective.

When he gets two strikes, he tries to finish them off using a similar recipe: 52.1% changeups (down and out of the strike zone) and 37.0% fastballs, with the latter trying to get the chase by throwing them high, taking advantage of its spin rate and reduced drop.

With two strikes, he goes to the slider 41.4% of the time while aiming low and away to get the chase, and uses the change 32.5% of the time. It has to be baffling for right-handed hitters expecting a slider only to see the ball suddenly breaking down and in. He uses 26.0% four-seamers, mostly high and away or high and out of the zone, with two strikes.

“He controls the count so well. His stuff is really good. I think that with the deception he creates, you can tell hitters just do not pick up the baseball very well when they have those late reactions to the breaking ball he throws, especially as a righty when they are getting out of the way of it. They are just not picking it up that quick,” Rays manager Kevin Cash told Forbes.

Adam’s delivery is a bit funky. It looks like he’s about to show the hitter his grip, but he really isn’t, lowering his right hand instead and hiding the ball with a quick wrist move when he takes the glove hand off. He then suddenly explodes towards the release point in the blink of an eye. Like Cash says, it is really difficult to pick up the baseball off his hand.

With Adam, it hasn’t been a big change, but instead, several small modifications that have made him an elite bullpen piece.

If we analyze his performance on a per-pitch basis instead of focusing just in the outcome of his at-bats, we find that Adam has been the best reliever in baseball. To do that, we use raw value, or RV-. It’s a stat that evaluates everything that happens in an at-bat, not just its end result: pitch location, stuff quality, intent, launch angle, exit velocity, horizontal spray angle of the ball, and more.

For pitchers, 100 is considered average when it comes to RV-, and lower is better. Adam has the best RV- in MLB among relievers with at least 50 innings at 20. It means that he hardly makes a mistake and he controls at-bats like a seasoned pro.

But other metrics validate his success, too. Whiff+ measures a pitcher’s ability to miss bats and command+ evaluates intent and whether he achieves what he wanted with every pitch. For those, 100 is considered average and higher is better.

The 31-year-old Adam is above average in two of the three stats. He ranks seventh in the majors among those with at least 50 innings with a 146 whiff+. While he has a below-average 93 command+, it’s actually not bad for someone with so much bat-missing ability and pitch movement. In fact, of the six pitchers above him in whiff+, only Jhoan Duran of the Minnesota Twins has a command+ above the league average at 101.

As long as Adam’s whiff+ is as high as it is, he can live with a command+ in the 90s as the top pitcher in RV-.

With a perfectly designed pitch mix and excellent pitches, elite spin rates and extension, Adam’s success is not only legit, but also very much sustainable. He’s the most recent elite reliever produced by the Rays, and is here to stay.