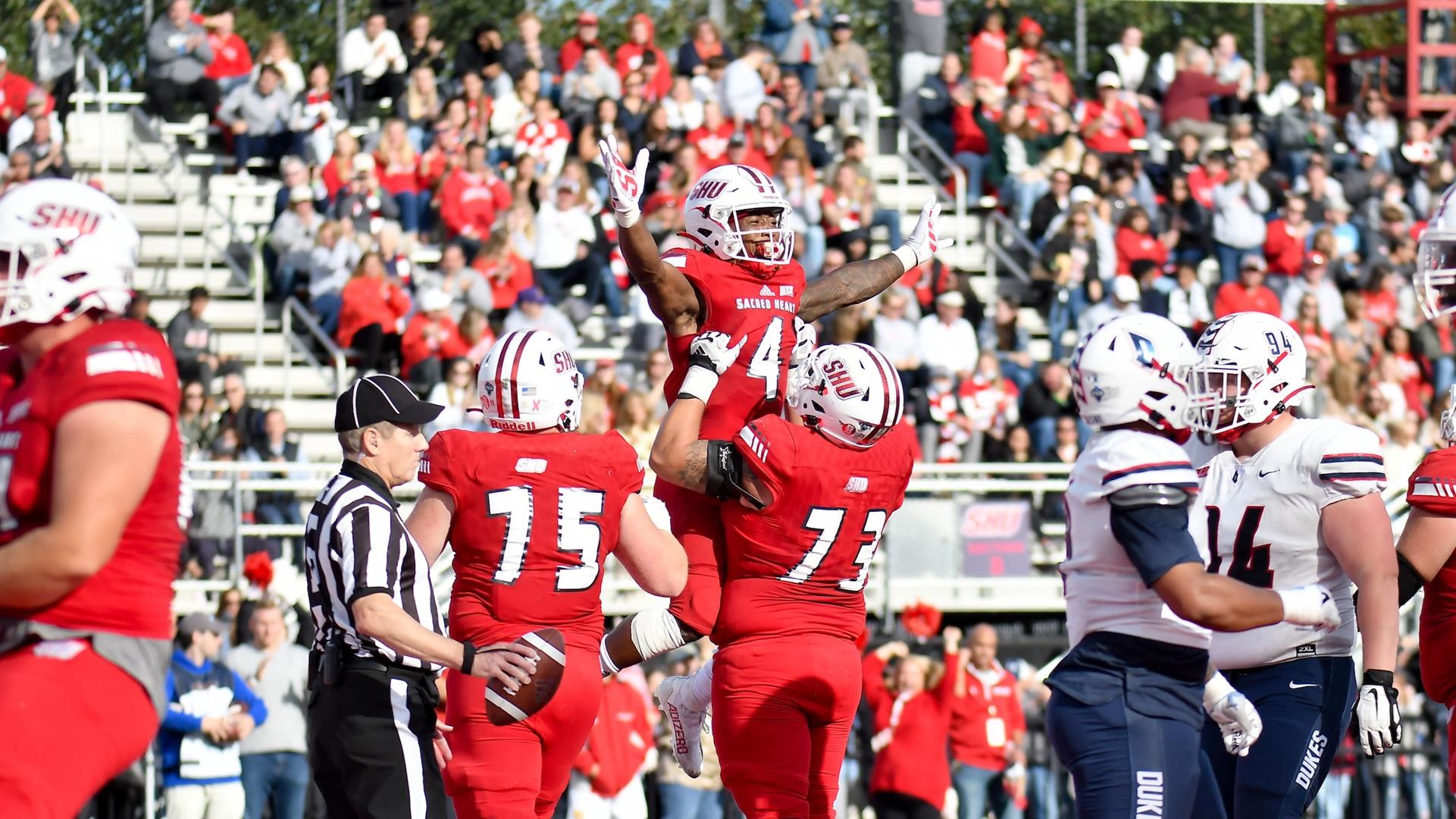 Bryant may have been considered the Northeast Conference’s preseason favorite if it hadn’t departed for Big South football this fall.

But while the Bulldogs often were in and around the NEC title race, they never finished off a championship during 14 seasons in the conference.

The closers in recent years have been Duquesne and Sacred Heart, who both have five titles apiece since the NEC’s FCS playoff era began in 2010.

Not surprisingly, Sacred Heart, the two-time defending NEC champion, and Duquesne are the teams to beat again this fall. The eight-team race includes newcomer Stonehill.

Here’s a quick look at the upcoming NEC season:

1. *Duquesne (7-3, 5-2) – The Dukes have won at least a share of five NEC titles under coach Jerry Schmitt since 2011, but they have earned only two automatic playoff bids in that time. Joe Mischler was the season-opening quarterback before an injury opened the door to Darius Perrantes (1,620 passing yards, 17 touchdowns). Running back Billy Lucas averaged just over 100 rushing yards in the Dukes’ final four games.

2. Sacred Heart (8-4, 6-1) – The Pioneers lost a lot of top NEC talent to graduation and transfers, but return the conference’s offensive player of the year in running back Malik Grant (1,347 rushing yards, 11 total TDs last season). Plus, the offense should be more balanced with transfer wide receiver Devin Young (128 career receptions at Maine) aiding quarterback Marquez McCray. The defense is strongest on the line, where three of last year’s four starters are returning.

3. Saint Francis (5-6, 4-3) – The Red Flash may still be sighing over “what if” because their three NEC losses were by a combined five points last season. Quarterback Justin Sliwoski posted an impressive 162.2 passing efficiency behind 12 TD passes and only one interception. As NEC kickers combined for nearly 76 percent accuracy on field goal attempts, all-conference pick Alex Schmoke was 15 of 17 (88.2 percent), with the two misses coming from beyond 40 yards.

5. Central Connecticut State (4-7, 4-3) – With its first three NEC games against Sacred Heart, Saint Francis and Duquesne, CCSU will try turn the title race upside down by midseason. The Blue Devils need better consistency, something quarterback Romelo Williams and running back Nasir Smith must bring to the offense, and linebacker Chizi Umunakwe and safety Jonathan Cabral Martin to the defense.

7. Wagner (0-11, 0-7) – Wagner is seeking to end a 20-game losing streak, the longest in the FCS. The Seawolves were outscored by 283 points last season, the subdivision’s second-worst point differential to Bucknell. Titus Leo transitions from linebacker to defensive end and will seek to become the first three-time winner of the NEC’s defensive player of the year award.

8. Stonehill (8-2 Division II) – In their final D-II season, the Skyhawks posted their best record since 2013. Sixth-year coach Eli Gardner gets back playmakers in wide receiver Chris Domercant (21.5 yards per catch on 38 receptions, including nine TDs) and running back Jermaine Corbett. The 2022 schedule is unique through midseason: Division II opponents on Sept. 3 and 10, then a three-week break, Duquesne in the NEC opener on Oct. 1, followed by another bye week.

(A look back to NEC Football Preseason Media Day)

Jacari Carter, WR, Merrimack – The 5-foot-9 Carter ranked third in the FCS with 89 receptions, including a high of 18 against Maine. Eight of the catches went for touchdowns.

Malik Grant, RB, Sacred Heart (Walter Payton Award preseason nominee) – Grant rescued the Pioneers’ 2021 season while running back Julius Chestnut was sidelined for eight games, including 708 rushing yards in four October games. However, he was held without a touchdown in all of the team’s four losses.

Sacred Heart at Central Connecticut State (Sept. 10) – The road team is 7-4 in this series since 2010, which is welcome news to the two-time defending champion Pioneers as they head toward the season’s first NEC matchup.

Sacred Heart at Duquesne (Nov. 5) – This has come to be the biggest game of the NEC schedule. Last season, Sacred Heart scored 24 unanswered points in the second half to post a 31-13 win.

With a 28-26 win at Ohio U. last season, Duquesne became the first NEC program to defeat an FBS opponent.

Two conference losses are not such a sweet thing in the NEC. In the last 16 seasons, a champ has had more than one conference loss only in 2013 – a tie share between Sacred Heart and Duquesne.