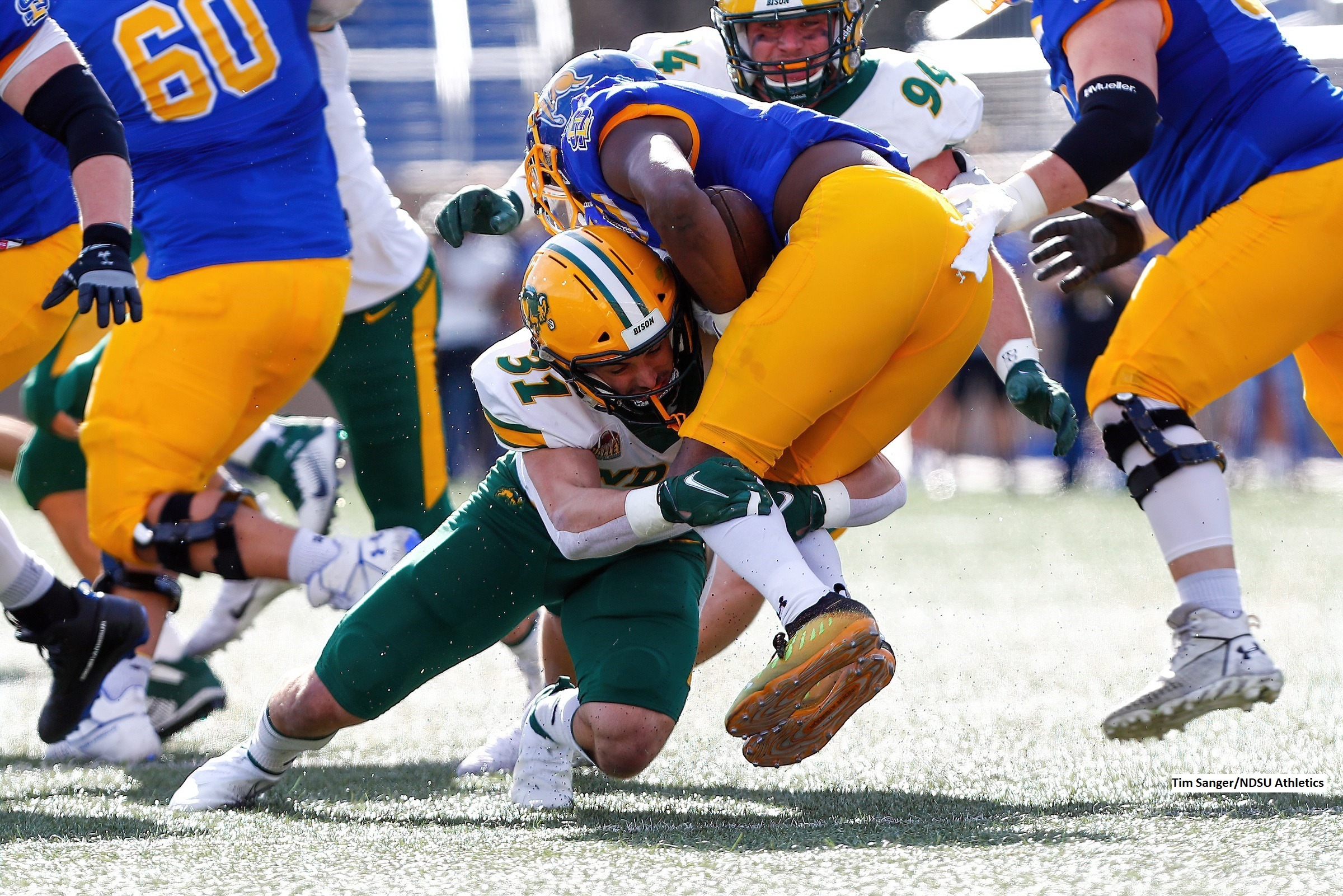 If coach Matt Entz’s squad makes its way back to Frisco, Texas, on Jan. 7, the question is, will another Missouri Valley Football Conference foe meet the Bison there?

The strongest FCS conference just tied the records for bids in a 16-team playoff (five, spring 2021) and a 24-team playoff (six, last fall), and the Valley could be more dominant with South Dakota State entering the season ranked second to the Bison, and No. 5 Missouri State and No. 9 Southern Illinois also in the preseason top 10.

NDSU won the only FCS championship game that matched two teams from the same conference – beating Illinois State 29-27 to end the 2014 season.

Here’s a quick look at the upcoming MVFC season:

1. *North Dakota State (14-1, 7-1; preseason No. 1 ranking) – Thirteen starters and significant depth return for the defending national champ, which posted the FCS’ highest point differential (+344, or 511-167) last season. The Bison will be relentless in the run with fullback Hunter Luepke, the outstanding player of the national championship game, quarterback Cam Miller and running backs Tamerik Williams, Kobe Johnson, Dom Gonnella and Jalen Bussey. A defense that surrendered only 11.1 points per game – the fewest in the program’s Division I era (since 2004) – has standouts galore, including defensive linemen Spencer Waege and Eli Mostaert, linebacker James Kaczor and safety Michael Tutsie.

2. *South Dakota State (11-4, 5-3; preseason No. 2 ranking) – Coach John Stiegelmeier says his offense is the most-skilled in his 27 seasons. The key is a healthy Mark Gronowski, the MVFC offensive player of the year in spring 2021 who was sidelined by a knee injury last fall. The offensive line is stout, and the skills positions include three Walter Payton Award nominees, running back Isaiah Davis, tight end Tucker Kraft and wide receiver Jaxon Janke. Linebacker Adam Bock (125 tackles) and defensive linemen Caleb Sanders and Reece Winkelman anchor the defense. (Perhaps go with a bold SDSU prediction)

6. North Dakota (5-6, 3-5) – UND, which shared the MVFC title in spring 2021, has won 15 of its last 16 home games inside the Alerus Center. The Fighting Hawks’ offense returns eight starters, and quarterback Tommy Schuster (64.8 career completion percentage) is well-protected by his line. Linebacker Devon Krzanowski has led the team in tackles in back-to-back seasons.

7. South Dakota (7-5, 5-3) – As the Coyotes seek a return to the playoffs, the MVFC schedule doesn’t break well for them – they don’t face Indiana State (picked 10th) or Western Illinois (picked 11th). Quarterback Carson Camp has enjoyed a fast start to his career, completing 64.5 percent of his passes for 3,219 yards and 20 touchdowns (including a “Hail Mary” to beat South Dakota State) in 16 games.

8. Illinois State (4-7, 2-6) – It’s a good thing the Redbirds have six home games as they pursue a bounce-back season because their road opponents were a combined 45-21 (.682) last fall. Transfer quarterback Zack Annexstad once started the 2018 Minnesota season opener as a walk-on true freshman, but the offense first thinks running back Cole Mueller, who fell 23 yards shy of 1,000 rushing yards. Linebacker Zeke Vandenburgh (73 tackles, four sacks) is the defensive standout.

9. Youngstown State (3-7, 2-6) – The Penguins relied on running back Jaleel McLaughlin for 38.6 percent of their scrimmage yards (1,315 of 3,411) – second-highest in the FCS. Quarterback Demeatric Crenshaw picked up 599 yards and seven TDs on the ground while earning MVFC freshman of the year. One of the team’s key transfer pickups is former Western Illinois linebacker Greg Benton Jr.

10. Indiana State (5-6, 3-5) – The Sycamores continue to struggle to beat the upper-tier programs of the MVFC, but their progress earned fifth-year coach Curt Mallory a contract extension through 2027. Back for a sixth season, Dante Hendrix (140 career receptions) is the go-to player on an offense that is revamped in the backfield. A non-conference home game against preseason No. 3 Montana adds to matchups with No. 1 NDSU and No. 2 SDSU.

11. Western Illinois (2-9, 2-6) – New coach Myers Hendrickson faces a tough rebuild at his alma mater, which lost many of its key players from last season and has a 5-25 record (4-18 MVFC) since 2019. Cornerback J.J. Ross (35 tackles, six pass breakups) and defensive tackle Cam Washington are veterans on the defense. The offense surrendered 49 sacks, the second-most in the FCS to Presbyterian.

Spencer Cuvelier, LB, Northern Iowa (Buck Buchanan Award preseason nominee) – A tackle machine in the middle of UNI’s vaunted defense, he had 19 stops against South Dakota and 15 against Sacramento State.

Hunter Luepke, FB, North Dakota State (Walter Payton Award preseason nominee) – The two-time first-team All-American was dominating in the postseason with six of his 11 touchdowns, including three in the national championship game.

Jason Shelley, QB, Missouri State (Walter Payton Award preseason nominee) – Shelley was the MVFC’s top offensive player and threw for a school-record 3,347 yards despite being sacked 45 times. He should improve on a 58.8 completion percentage with better protection from the offensive line.

South Dakota State at Missouri State (Sept. 24) – Two preseason top-five teams meet for the first time since 2019, and back then nobody could foresee Missouri State’s rise (the Bears were 8-40 in MVFC games from 2014-19). The Jackrabbits surely have the toughest road schedule in the FCS.

South Dakota State at North Dakota State (Oct. 15) – The middle weekend of the regular season boasts the biggest FCS game. Since 2011, only one program has more than one win over the Bison, and it’s SDSU with four, including the last two meetings.

At least one MVFC team has posted an FBS win in every full season (not 2020) since 2010, including South Dakota State over Colorado State last fall. North Dakota State has a six-game winning streak against the upper tier of Division I.

The MVFC has had a team appear in 11 straight FCS championship games appearances (North Dakota State nine times and Illinois State, Youngstown State and South Dakota State once each). That more than doubles the next-closest conference run: CAA Football with five straight seasons from 2006-10.