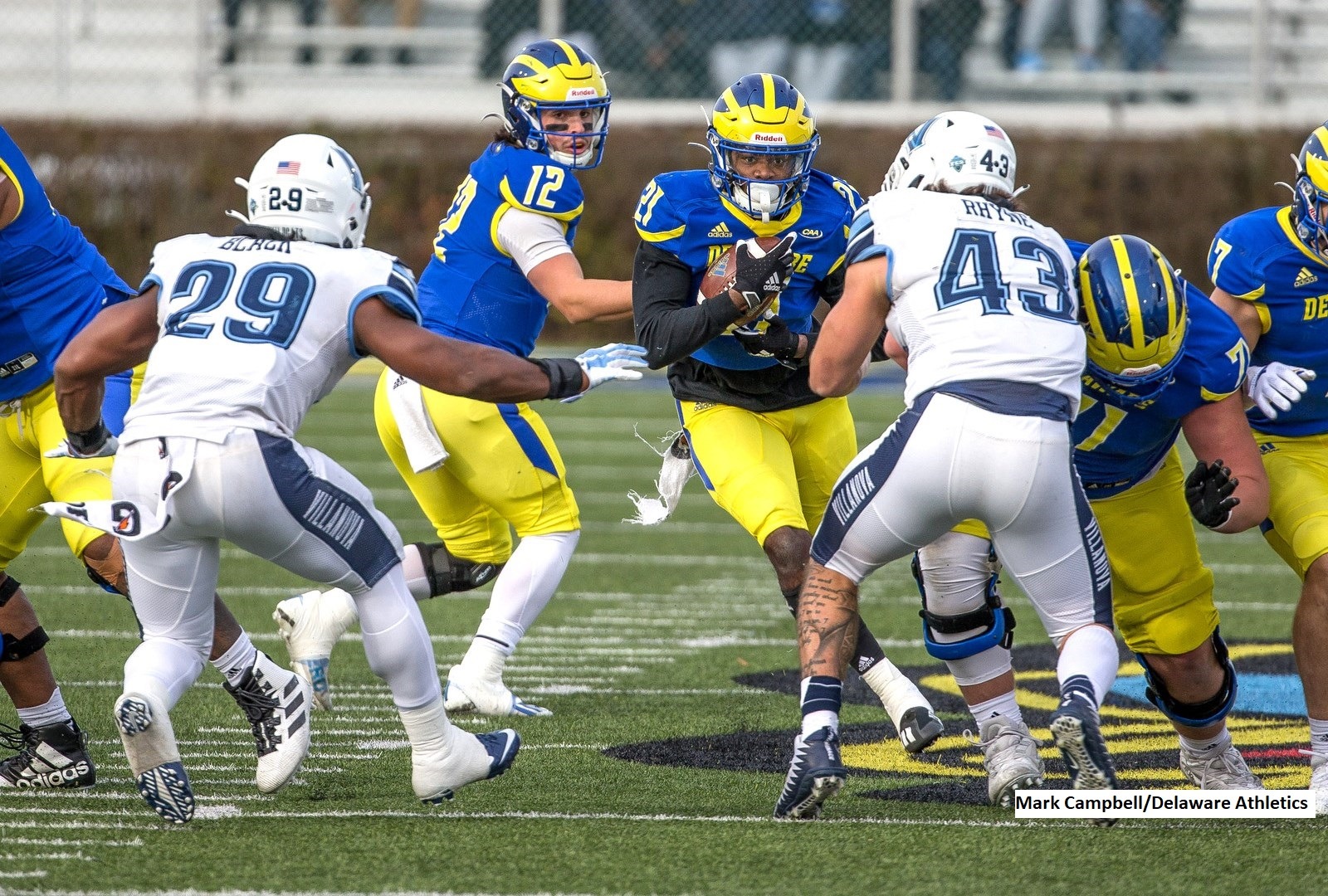 By midseason, the team sitting sixth or seventh in the CAA Football standings will surely feel it’s as strong as the first-place team, and it may be right.

The new largest FCS conference (13 teams in 2022, 15 in ‘23) has the FCS’ most interesting title race due to its depth. The eventual champion of the CAA’s 75th anniversary season will somehow travel smoother terrain than the many good teams that will ride the weekly roller coaster.

While the race is always competitive, James Madison has moved upward into the FBS after being a part of six CAA titles in its final seven FCS seasons. Villanova, which shared the conference title last season, is the preseason favorite, but it lost a number of key players as well.

Monmouth and Hampton have joined the CAA from the Big South. Next year, Campbell and North Carolina A&T will make the same move.

Here’s a quick look at the upcoming CAA Football season:

1. *Villanova (10-3, 7-1; preseason No. 6 ranking) – The Wildcats are surrounding new starting quarterback Connor Watkins with an experienced offensive line, including CAA preseason team selections Michael Corbi and Colin Gamroth, and playmakers, led by wide receivers Rayjoun Pringle and Jaaron Hayek, who combined on 17 touchdown catches, and running backs DeeWil Barlee and Jalen Jackson. The biggest losses are on defense, although transfer linebackers Danny Damico (Albany) and Antonio Montero (Rice) plug some of the holes.

2. *Rhode Island (7-4, 4-4; preseason No. 22 ranking) – After posting their highest win total (seven) since 2001, the veteran Rams are in pursuit of their first FCS playoff appearance since 1985. There are 69 career starts between four returning offensive linemen, who will set up quarterback Kasim Hill (24 total TDs) and a deep running backs stable. Cornerback Jordan Jones totaled five interceptions and eight pass breakups for a defense that had 10 and 51, respectively.

4. William & Mary (6-5, 4-4) – After handing Villanova its only CAA loss to improve to 6-2, the Tribe went 0-3 in November. That should motivate a veteran team that features defensive end Nate Lynn, the conference’s preseason defensive player of the year, and boasts two experienced quarterbacks, Darius Wilson and Hollis Mathis. All of the key running backs return to the CAA’s top-ranked rushing attack, led by Bronson Yoder (622 yards) and Donavyn Lester (519). (Check out W&M’s amazing win streak over VMI)

5. Stony Brook (5-6, 4-4) – Wins in four of their final five games last fall could be a springboard for the Seawolves’ 2022 season, when they miss Villanova and Delaware on the conference schedule. Running back Ty Son Lawton, the CAA’s preseason offensive player of the year, will follow the blocking of Kyle Nunez, who’s already earned all-conference postseason honors four times (2020, first team; 2018, ’19 and 21, second team).

6. Richmond (6-5, 4-4; preseason No. 24 ranking) – What’s back for a team that won its final four games is quite good, including two-time CAA first-team linebacker Tristan Wheeler. What’s new via transfer is creating the buzz – the former VMI passing combo of quarterback Reece Udinski (7,977 career passing yards and an FCS-record 368 consecutive passes without an interception in 2019) and wide receiver Jakob Herres (226 receptions, the high among active FCS players).

8. Monmouth (7-4, 6-1 Big South) – The Hawks are 38-14 over five straight winning seasons. A lot of respect was bestowed on quarterback Tony Muskett (34 TD passes to six interceptions in 15 career games) when he was named to the CAA preseason team. Running back Juwon Farri, defensive back/returner Eddie Morales III and linebacker DaQuan Grimes (back from an Achilles tear last August) have played big roles in the Hawks’ success.

9. Maine (6-5, 4-4) – Alum Jordan Stevens takes over a program that reversed a 1-4 start with a 5-1 finish last season. Quarterback Joe Fagnano, who was limited by injury to four games, has a superb 31 TD passes to six interceptions in his career, and the Black Bears are 8-3 when he goes over 200 passing yards.

10. New Hampshire (3-8, 2-6) – The Wildcats lost the final eight games of the Sean McDonnell era (157 wins, 14 playoff appearances) and finished last in the CAA in a number of key statistics. New coach Rick Santos guided the program for six months in 2019 when McDonnell was on medical leave. He saw that season what a healthy Max Brosmer can do behind center, and Dylan Laube led the CAA in all-purpose yards per game (147.4) last season.

11. Towson (4-7, 3-5) – Having sat out the pandemic-delayed 2020 season, the Tigers have finished between 3-5 and 5-3 in their last six CAA schedules. They’ll look new in the offensive skills positions, although fullback Luke Hamilton was named to the CAA preseason team. Tyrrell Pigrome, a starter at Maryland and Western Kentucky, has passed for 3,380 yards and 18 TDs in a 45-game career.

12. UAlbany (2-9, 1-7) – Five losses by seven or fewer points suggests the Great Danes were better than their final record, but they’re replacing a number of top players. There are sophomore building blocks in quarterback Joey Carino, wide receiver Roy Alexander and linebacker Jackson Ambush, who had a team-high 97 tackles.

13. Hampton (5-6, 3-4 Big South) – The Pirates have firepower with quarterback Jett Duffey (2,547 passing yards last season), running back Elijah Burris (640 rushing yards, seven TDs) and wide receiver Jadakis Bonds (24 TD catches in 28 career games). The defense has to improve against the pass, having allowed 271.2 yards per game and 20 touchdowns against only six interceptions.

(A look back at CAA Football Media Day)

Delaware at Rhode Island (Sept. 17) – In a scheduling quirk, this early showdown marks the fourth straight season in which the matchup is in Kingston. URI won 22-15 last October with a touchdown return off a blocked punt in the final four minutes.

Villanova at Richmond (Oct. 15) – The team will more rushing yards and a higher time of possession has won the last five matchups.

Delaware at Villanova (Nov. 19) – The CAA’s preseason poll should be long forgotten by the time its top teams meet in the “Battle of the Blue.” Villanova used a late goal-line stand to hold on for a 21-13 win last season – the Wildcats’ 14th victory in the last 16 meetings.

With Maine and Rhode Island topping UMass last fall, the CAA has posted multiple wins over FBS opponents in four of the last five full FCS seasons (2016, ’17, 18 and ’21).