The EuroBasket 2022 Players to Watch | The Analyst 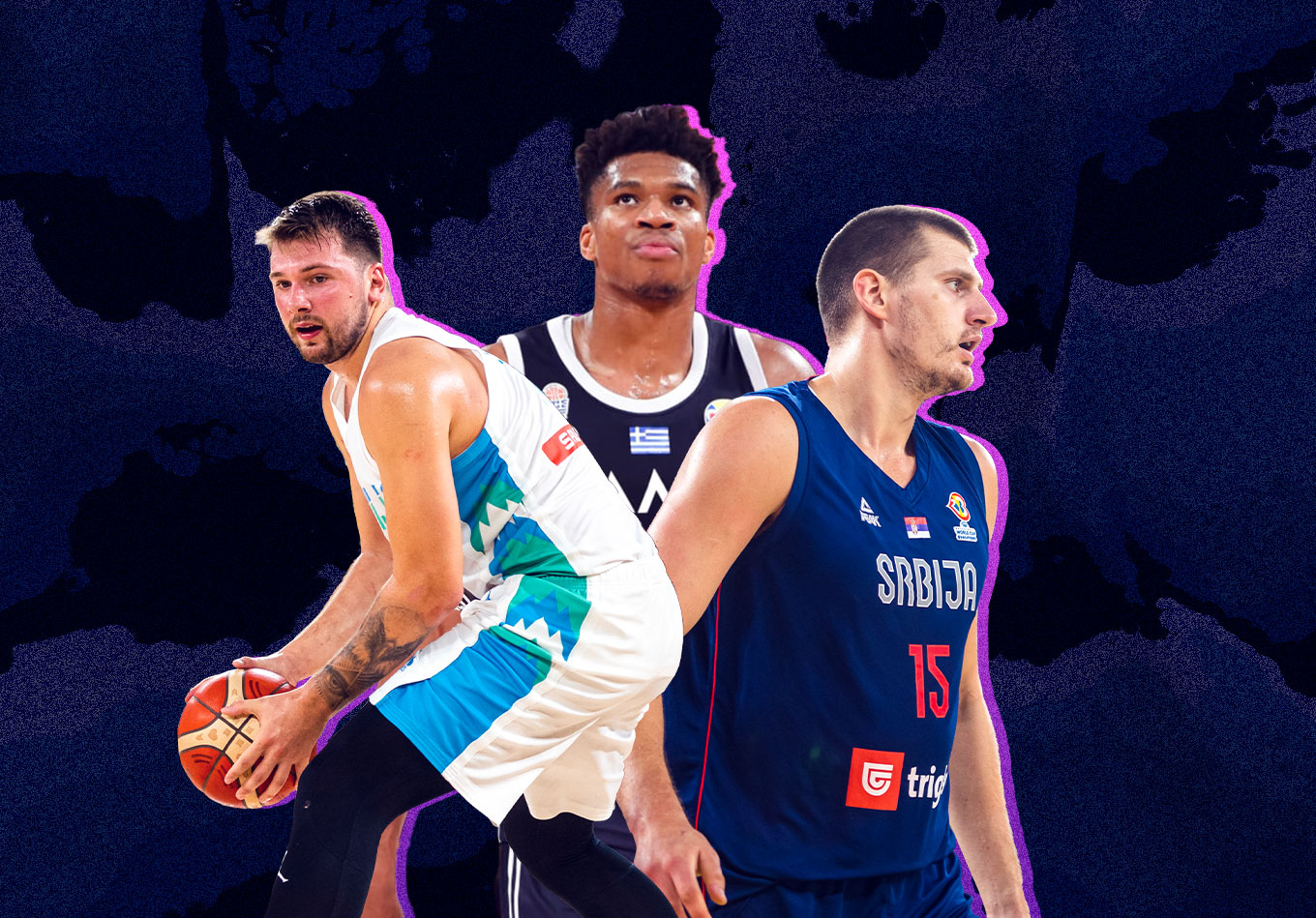 The EuroBasket 2022 Players to Watch

The EuroBasket, considered by many to be the toughest international basketball competition, is back after a five-year absence.

The 2022 edition will undoubtedly be one of the most prestigious, with many teams capable of upending defending champion Slovenia. It is packed with major NBA players who all decided to answer the call and represent their national teams in Europe.

They are big names in the best league in the world, accumulating the last four MVP titles, one NBA Finals MVP, four NBA Defensive Player of the Year Awards, one Rookie of the Year Award and multiple All-Star Game appearances.

The European players have never had more influence on the NBA than now. Five of our six players to watch finished in the top seven in double-doubles last season. In fact, the eight players with the most double-doubles (including triple-doubles) in 2021-22 are eligible to play for European countries.

So who will be the biggest star during the 2022 EuroBasket?

France is one of the favorites after finishing third in the 2019 World Cup and second at the 2020 Olympics. Gobert, who was recently traded to the Minnesota Timberwolves after nine seasons spent with the Utah Jazz, again headlines a French team loaded with NBA players.

In fact, he’s ranked in the top five in blocks in each of the last six seasons – only six players have had better stretches over the last 50 years in the NBA.

Gobert also finished fifth in offensive rebounds and first in second-chance points last season. And only two players in NBA history had a better field goal percentage than his 71.3 mark (minimum 500 attempts).

Gobert will take part in his second EuroBasket after helping Les Bleus win the bronze medal in 2015. That year, he grabbed 10 or more rebounds in four of his nine games, including double-digit boards in the semifinal and bronze-medal contests.

Having gained seven more years of NBA experience since that tourney, Gobert’s leadership figures to be a key to France’s success during the 2022 EuroBasket.

Summer competitions are often a dilemma for NBA players as they happen at a time when they can rest, recover, or prepare for the next season. But since his national team debut in 2011, Valančiūnas has never missed a major international competition (five EuroBaskets including 2022, two World Cups and two Olympics).

Valančiūnas has become one of the NBA’s most consistent centers, averaging a double-double in each of the past three seasons. He’s one of the only four active players to average 14 or more points and 11 or more rebounds in the past there or more seasons, joining Giannis Antetokounmpo (four), Gobert (four) and Lithuanian teammate and former Indiana Pacer Domantas Sabonis (three).

Last season, Valančiūnas had the most rebounds in one playoff series in New Orleans Pelicans history with 86 in a six-game series with the Phoenix Suns. He’s one of only four current players with 50+ playoff games to have a double-digit rebounding average (10.0).

Valančiūnas should have plenty of confidence heading into the 2022 EuroBasket. The underrated big man, fourth on Lithuania’s all-time scoring list (376), has averaged 15.3 points and 10.2 rebounds in 17 EuroBasket games in which he’s played at least 20 minutes. And no active player has posted more double-doubles in the competition.

Valančiūnas pulled down 15 or more rebounds in his last three EuroBasket games – the best such run in the tournament over the last 25 years. He’ll try to extend that streak in a challenging first game against Slovenia.

Though they’re usually one of the favorites, Lithuania hasn’t been able to take home the title since 2003. Is it the year Valančiūnas and his teammates finally end the drought?

Slovenia entered the 2017 EuroBasket with a mix of experience players, such as eventual tourney MVP Goran Dragic and a new addition named Dončić. The Real Madrid prodigy, then just 18 years old, averaged 14.3 points, 8.1 rebounds and 3.6 assists in his first international competition, earning a place on the All-Tournament Team.

Following that performance, Dončić helped Real Madrid win the Liga ACB and EuroLeague – earning MVP honors in both competitions – before being selected third overall in the NBA Draft. After shining in Europe, he conquered the NBA immediately with 21.2 points, 7.8 rebounds and 6.0 assists per game.

The Dallas Mavericks superstar became only the second player to combine 20+ points, 6+ rebounds and 6+ assists in his rookie season (Oscar Robertson of the Cincinnati Royals in 1960-61) and the second European player to win Rookie of the Year (Pau Gasol of the Memphis Grizzlies in 2001-02).

Now Dončić’s career scoring average (26.4) is one of the best of any player after four seasons over the last 45 years and more impressively, his 32.5 scoring average through 28 playoff games is second only to Michael Jordan.

Since his debut in 2018-19, the 6-foot-7 Slovenian is one of only two players to average 25+ points, 8+ rebounds and 8+ assists in the NBA. LeBron James is the other, compiling those averages over his career with the Cleveland Cavaliers, Miami Heat and Los Angeles Lakers.

Dončić was one of five players with 10+ triple-doubles (10) and the only player who had multiple games with 45+ points and 15+ rebounds last year. He averaged 49.6 points via scoring and assisting – second in the league behind Atlanta Hawks guard Trae Young (50.9).

Antetokounmpo is taking part in his second EuroBasket tournament after competing in 2015 when Greece was eliminated by Spain in the quarterfinals.

And the timing couldn’t be better with Giannis playing some of the best basketball of his career last season. He joined three Hall of Famers and Joel Embiid as the only players to average at least 29.0 points, 10.0 rebounds, 1.0 steal and 1.0 block in a season.

2021-22 was also the fifth consecutive campaign in which he’s averaged 26+ points and 10+ rebounds – only six other players have had that stretch and all of them are in the Basketball Hall of Fame.

Giannis, who has led the Milwaukee Bucks to the top of the Central Division standings in four straight seasons, also has become the youngest player to reach 14,000 points, 6,000 rebounds and 3,000 assists in his career.

Greece made 38.7% of its 3-point attempts in the last EuroBasket for the third-highest percentage of any team in the 2017 tournament.

That could be key in this year’s competition if Giannis is able to keep creating opportunities for his teammates as he did with the Bucks in the past season. Antetokounmpo assisted on 224 3s, the most in the league.

Giannis is known for loving challenges, and he’s still to show in FIBA basketball what he has showcased in the NBA. And at 27 years of age, he is Greece’s biggest hope to conquer a medal for the first time since 2005 when they were crowned as the European champions.

After finishing second in the 2017 EuroBasket, the European powerhouse has its sights set on finally capturing its first gold medal in the competition. It’ll certainly help to have a two-time NBA MVP on the roster for the first time.

Jokić has played for Serbia in the Olympics (second in 2016) and World Cup (fifth in 2019), but he has yet to take part in the EuroBasket event. And without Bogdan Bogdanovic – Serbia’s top scorer in the last World Cup and EuroBasket – this might be the year ‘the Joker’ takes over the leading role.

And you can expect the Denver Nuggets star to make a killing on his touch shots in the paint (hook shots and short jumpers). No one took more such shots in the NBA last season (396) and no player had had a better field-goal percentage (63.1%) on them among players with at least 100 attempts.

But ‘the Joker’ doesn’t limit himself to the paint. He had one of the most accurate midrange jumpers in the NBA in 2021-22, making 53.6% of his attempts (same ratio as Kevin Durant of the Brooklyn Nets). In fact, only one player had a higher shooting percentage from midrange: Seth Curry at 53.9%.

However, one of Jokić’s most recognizable strengths is his ability to create open looks for his teammates. He was the only non-guard ranked in the top 15 in assists last season, dishing out 584 – the sixth most among all players. He also finished ninth in the 2019 World Cup with 38 assists across eight games.

After representing Germany in the 2015 and 2017 EuroBasket, Schröder is hoping to lead the team past the quarterfinals for the first time since 2005.

Schröder, who averaged 13.5 points for the Boston Celtics and Houston Rockets last NBA season, was second in the 2017 EuroBasket with 23.7 points per game. He had 20 or more points and seven or more assists in four different games, while no other player did it more than twice.

In the 2019 World Cup, he impressed with 19.6 points and 9.4 assists per game. Schröder and Tomas Satoransky were the only players to have multiple double-doubles with points and assists in the tournament.

His scoring might have dropped over the past two NBA seasons, but some of his other numbers have improved, specifically his assists and assists per turnover.

With Schröder leading the way Germany has high hopes that it can advance to the semi-finals for the first time since Dirk Nowitzki carried the team to the silver medal 17 years ago.