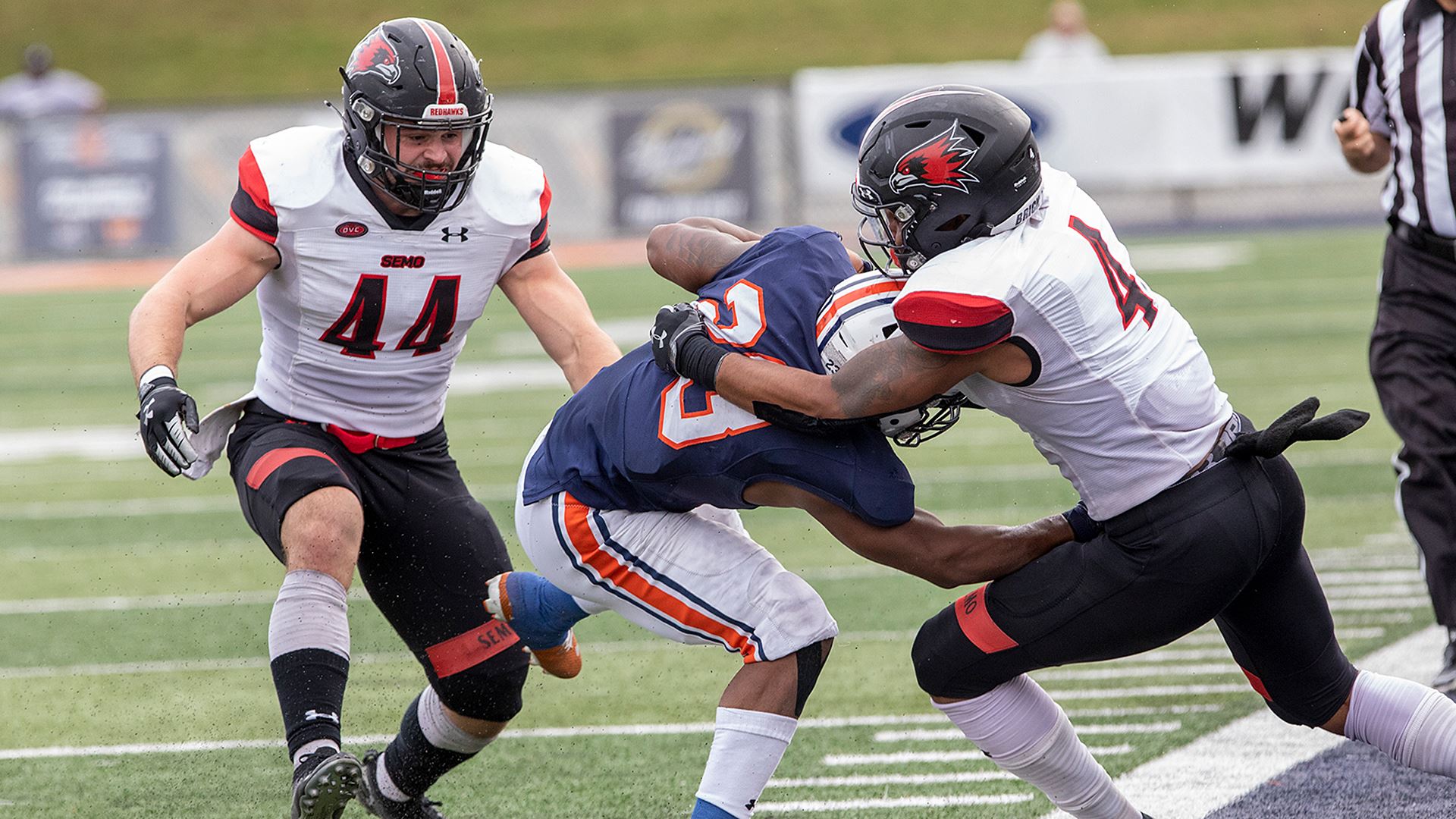 Lindenwood joined the OVC this year, one year after former Heisman Trophy winner Eddie George entered the conference as Tennessee State’s coach to much attention.

Murray State has been in the spotlight with a move next year into the nation’s leading FCS conference – the Missouri Valley.

No wonder it feels a little like you have to go off-screen to locate Southeast Missouri.

“I actually think we are flying under the radar,” strong safety Lawrence Johnson said. “I don’t think our record last year showed how good of a team we were. It’s easy to overlook us.”

That may be happening outside the OVC, but, more importantly, SEMO is a known quantity within the conference. The Redhawks were picked second behind UT Martin in the OVC’s preseason poll Tuesday at media day in Franklin, Tennessee.

SEMO always seems to be in title contention under coach Tom Matukewicz, who’s entering his ninth season. The Redhawks went to the FCS playoffs in 2018 and again the following season as conference co-champs, had a Buck Buchanan Award winner with linebacker Zach Hall in ’18, and enters the OVC’s 75th season with more league wins over the last five seasons (27) than any current member of the conference.

“I love that because SEMO’s never had consistency,” Coach Tuke, as he’s affectionately known, said.

The Redhawks are a bit forgotten nationally because they finished only 4-7 last season. However, they were in the OVC race until mid-November, tying for second place with a 4-2 OVC mark and handing UT Martin its only conference defeat.

Matukewicz said paying attention to detail is pivotal for a team that returns 16 starters, including specialists. None is bigger than running back Geno Hess, the OVC’s preseason offensive player of the year, who as a junior led the conference in rushing yards per game (111.6) and points per game (8.4).

Oddly, the top two teams in the preseason poll won’t play each other even though they did twice last season in another rarity. Lindenwood joined the OVC in February after many schedules were in place, so the reconfiguring resulted in the seven-member conference giving only five league games to all teams except Lindenwood, which has four.

UT Martin coach Jason Simpson said it’s not good for the conference that his squad won’t face SEMO. The Skyhawks’ 17th-year mentor knows good football when he sees it, and there will be more this fall with his squad, which is the preseason favorite for the first time since it joined the OVC in 1992.

“Here’s what you hope is that those lessons we learned last year are imprinted in our minds,” Simpson said, “all the little details of what it took to beat Missouri State on the road (in the playoffs), to go to Montana State in the second round without our (starting) quarterback and several players on our offense who were hurt, and build off that.”

With the NCAA transfer portal exploding in recent years, the OVC astutely added a newcomer team to its preseason announcements. The group included Tennessee Tech quarterback Jeremiah Oatsvall, the 2017 OVC freshman of the year at Austin Peay who later moved on to Memphis, and Eastern Illinois linebacker Foday Jalloh, formerly at Central Connecticut State.