Can Rakim Jarrett Become the Next Stefon Diggs out of Maryland? | The Analyst 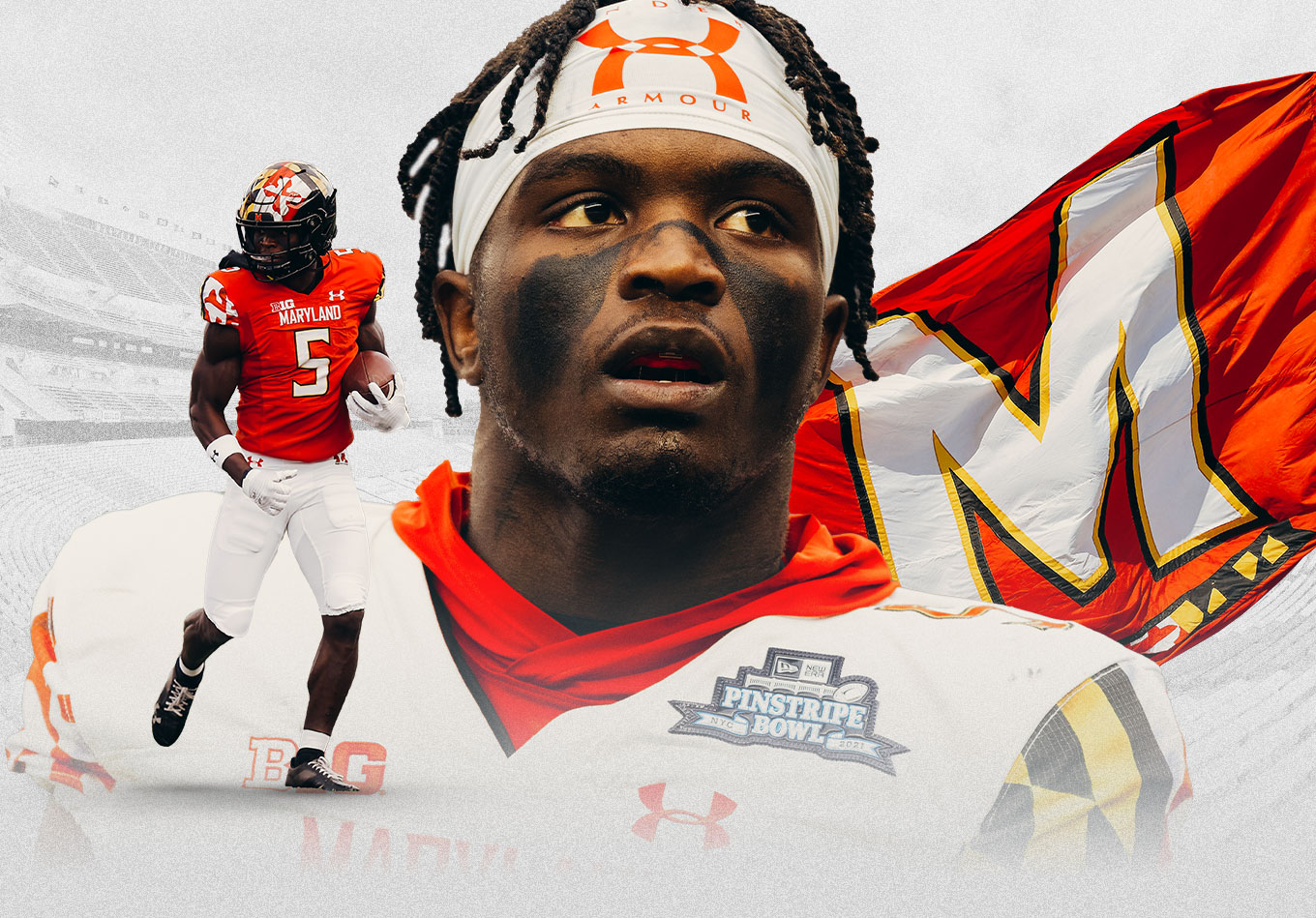 Maryland has had a surprising amount of success luring in transfer talents from blue-blood college football programs, as well as landing nationally renowned prospects out of high school.

It is fairly staggering the amount of talent they have been able to pull.

While Stefon Diggs still holds the title for the highest recruit in school history, another wide receiver is looking to prove the hype won’t end with his five stars. Once the top player in the Washington D.C. area and the fourth-ranked receiver in the nation in the 2020 class, Rakim Jarrett opted to stay home and play for the Maryland Terrapins.

With 27 total offers, and from the likes of Alabama, Clemson, Ohio State, and every imaginable top program, Jarrett committed to LSU in 2019. However, he decommitted and signed with Maryland on National Signing Day, stating he had more trust in Locksley than he did the LSU coaching staff.

While his freshman season was cut short by the COVID-19 pandemic that limited the Big Ten slate, Jarrett took complete advantage of his full first season with the Terrapins. On 62 receptions, Jarrett racked up 829 yards and five touchdowns during a breakout year.

Now he’ll be surrounded by a great deal of continuity on the offensive side as he aims to reach new heights in his junior season at Maryland. We’re examining the foundation he’s already built and whether he’ll be able to take his game to another level.

Listed at 6-foot and 190 pounds, Jarrett has a bit of a compact build. This allows him to play a physical brand of football between the lines, and it shows up on tape.

He already possesses savvy hands to win both off the line of scrimmage and at the top of his routes to bully cornerbacks off the spot. Translating down the field, Jarrett is no stranger to contact and is more than willing to force himself back over top of defensive backs and stack them. He has little issue getting open.

In fact, when comparing Jarrett to some of the more highly regarded 2022 NFL Draft prospects, only two of them (first-rounder Jameson Williams from Alabama and second-rounder Wan’Dale Robinson out of Kentucky) got open at a higher rate than Jarrett did a year ago.

Jarrett’s hands are not only strong when hand fighting with the man across from him, but they’re also strong at the catchpoint as well.

He shows immense control of his body to haul in passes that are way outside of his frame, and the comfortability to attack the football at full extension with ease. With nobody around him or in traffic, Jarrett is a fearless player who shows no signs of letting up even when danger surrounds him.

Jarrett wins with more than just strength. He’s a technician at the heart of his game with an exceptional understanding of route tempo and how to throttle in and out of routes, which keeps defensive backs on their toes.

The previously mentioned hand usage off the line scrimmage and at the top of his routes plays a major role. However, Jarrett is a good route runner who knows how to create and exploit blind spots, leverage stems, and effectively sink his hips.

On the year, he was credited with a 63.0 burn percentage, which places him in similar territory as the likes of second-rounders John Metchie III of Alabama (63.8%) and Robinson (63.2%) and first-rounders Treylon Burks (64.8%) of Arkansas and Jahan Dotson (63.8%) of Penn State among top draft prospects.

There are still elements of Jarrett’s game, however, that need to be cleaned up as he enters a vital year that could end with a massive payout from an NFL team.

While Jarrett uses his exceptional throttle and hands to get in and out of his breaks effectively, he’s not a player who can hit top speed and flawlessly change directions with lossless acceleration. This makes it a bit more difficult for him to get his head around when working on deep outs and ins.

This also shows up when he turns into a ball carrier after the catch and on manufactured looks. The Terrapins love to get the ball into Jarrett’s hands, and rightfully so. Once his speed hits top shelf, he has the ability to pull away from defenders and break pursuit angles.

But he’s a one-track runner with the ball, showing little willingness or ability to make a man miss in the open field or force missed tackles. Though Jarrett was given 66 touches last season, he managed to force just 12 missed tackles (.182 forced missed/broken tackle per touch). This would have put him at the lower end of the spectrum when compared to last year’s highly regarded prospects.

His catch rate is also on the lower end as well. Credited with three dropped passes a year ago, Jarrett finished with a catch rate of under 90% on the year. Again, his hands are immensely strong and he has the ability to comfortably play outside of his frame; he just needs to cut back on the lapses of concentration.

The reasons why Jarrett was a five-star recruit and one of the top receivers in the nation out of high school are evident. The shades of Diggs exist in his game.

However, high school rankings mean little to nothing in terms of NFL projection, so the work continues for Jarrett.

His burn percentage and ability to get open are comparable with players who were drafted in the top 50 of the 2022 NFL Draft, but some elements of his game lag behind. He has room to grow when it comes to becoming more flexible getting out of his breaks and remaining fluid in the open field with the ball in his hands.

Regardless, the talent is immense, and he’s considered one of the top receivers in the nation. A savvy technician with continuity around him entering his junior year, the stage is set for Jarrett to reach a new heights in 2022.