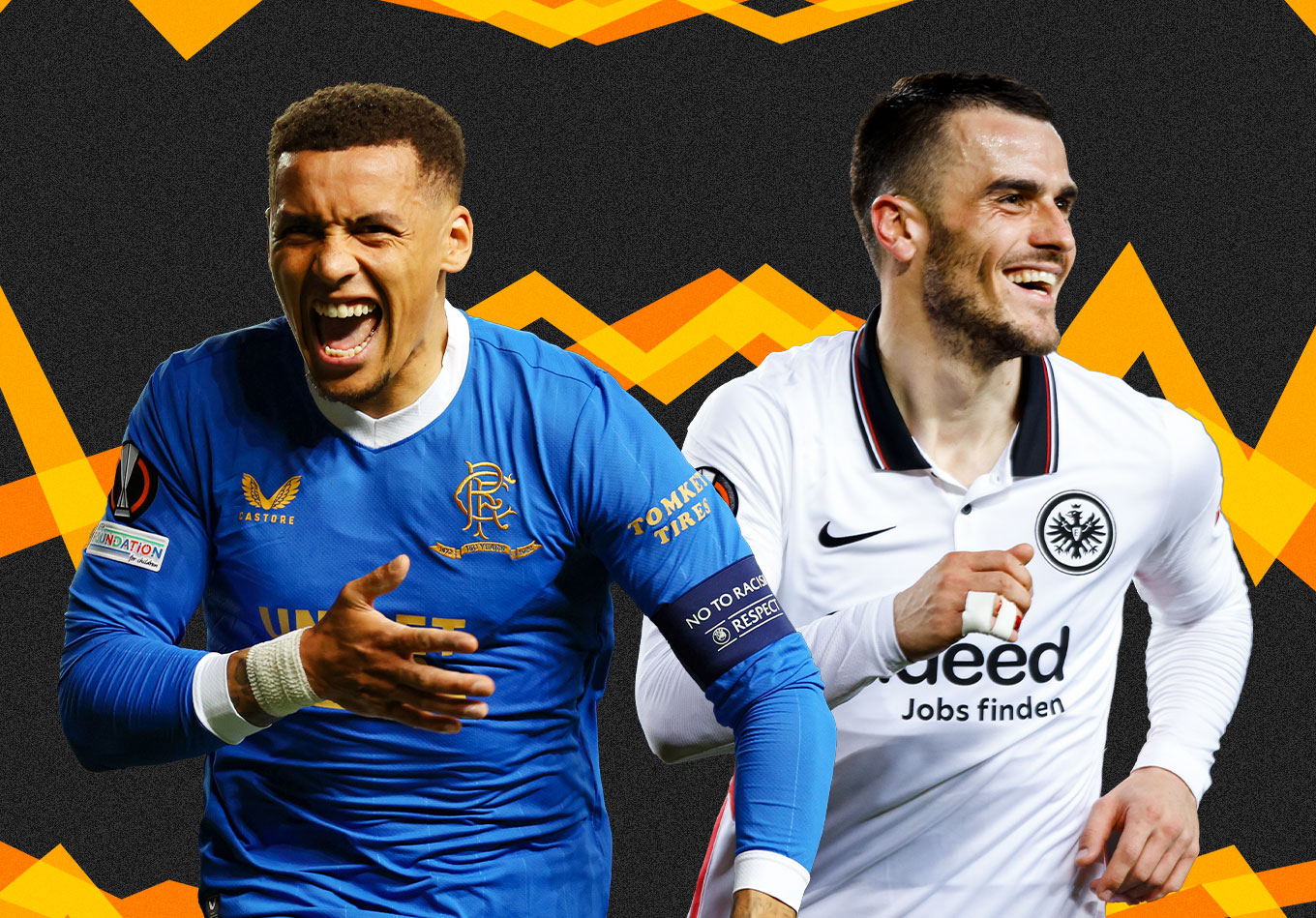 The Battle Down the Flanks: Why Kostić vs. Tavernier Could Decide Europa League Final

Does anybody love the Europa League quite like Eintracht Frankfurt? Well, sure, six-time winners Sevilla. But they weren’t in this season’s competition and Frankfurt, three years on from their run to the semi-finals, have this year gone all the way to their first European final since winning the UEFA Cup way back in 1980. And they’ve done so without losing a single game.

Seven wins and five draws have taken Eintracht all the way to, fittingly, Seville, with Real Betis and Barcelona sent packing in the knockout rounds before the Bundesliga side dispatched West Ham.

It’s been a sensational run for a side who finished 11th in the Bundesliga and it may just suit them to once again go into a game where they aren’t considered clear favourites; Rangers’ path to the final has seen them twice play the role of the underdog against Bundesliga opposition and twice they have sprung a surprise.

A different challenge faces Rangers in the final, though. The Scottish Premiership side might have to be the ones to dictate the game by dominating possession. That’s something they’re more used to than Frankfurt – they do it on a weekly basis domestically – but it hasn’t been the approach as they beat two Bundesliga sides on their run to the Europa League final. Rangers unsettled Dortmund away from home as they got tight, pressed man-to-man, and defended aggressively. When it worked, they would spring forward on the break in numbers. When Dortmund escaped that pressure, Giovanni van Bronckhorst’s side would drop off and defend compactly.

Rangers made their lowest (55) and third lowest (57) ball recoveries in any Europa League game this season across those two legs, looking to protect space and force turnovers rather than hunting loose balls in a way that could leave gaps. The balance between pressing and positioning was perfectly struck.

It was an intelligent approach against a more technically adept team and Van Bronckhorst used a similar blueprint against Leipzig, though he changed his shape to mirror the German side’s 3-4-2-1 formation. That flexibility is crucial for teams who want to punch above their weight at this level. But that’s where Wednesday’s final becomes a conundrum for the team from Glasgow: are they a better side than Frankfurt? Should they change their approach for the opposition again?

Rangers haven’t used a back three once domestically all season but pulled the shape out against a Leipzig side who keep things tight at the back and have developed a slow, calm, dominant possession game since the arrival of Domenico Tedesco.

After soaking up pressure and threatening on the break in Germany, Rangers committed high upfield at Ibrox, man-to-man, and caused Leipzig all sorts of problems. Rangers’ 19 pressed sequences – the number of times they forced Leipzig to lose the ball in three or fewer passes in their own half – is the third-highest total they’ve tallied in a Europa League game this season. That had a huge impact on Leipzig. Since the start of March, Tedesco’s side have only managed less than the 80.2% pass completion they recorded at Ibrox twice, in games at Atalanta and Dortmund.

In all four games against Bundesliga sides so far it clearly suited Rangers to allow their opponents to have the ball, prioritising compactness whether they were in their own half or looking to force errors higher up the pitch.

That’s shown by their field tilt value, a measure of the share of possession a team has in the attacking third. In the Europa League this year, Rangers’ field tilt is 46.6%, meaning that van Bronckhorst’s side actually enjoy less territorial dominance than their opponents. In the Scottish Premiership, that value rockets up to 73%, the second-highest value in the league behind Celtic. If Rangers do have to change their approach against Frankfurt, at least it will be to an approach they’re comfortable with.

Going forward, as the below graphics show, their right flank was particularly effective in both legs against Leipzig.

And that’s where things get interesting.

No matter which formation Rangers go with, which side dominates possession, or who finds more chances to break into space, the Europa League final is likely to be decided on one flank.

The two players, and the way their teams use them, are inherently different, though. Tavernier is a right-back who bombs on but is defensively solid. Kostić is an attack-minded winger who has been repurposed for a 3-4-2-1 and dominates the left flank offensively but can be beaten when he is heading back towards his own goal.

We recently explored the rise of the full-back in the modern game and, no matter what else happens, the importance of wing-backs as attacking threats will be captured in 90 minutes in Seville. It will probably decide the entire game.

Kostić could have easily been playing for Lazio this season. It was only a typo in an email that, supposedly, meant a bid arrived later than the deadline the Bundesliga club had set internally. So he stayed in Germany at another club that bears an eagle on its badge, and it’s a good thing he did. The Serbian has become a club icon since his arrival from Hamburg in 2018 and his efforts in the Europa League have played a huge part in that.

His return of 0.48 non-penalty goals and assists per 90 minutes in the competition is bettered by just two non-forwards with at least 1500 minutes in the competition since the start of the 2018-19 season. And those two — Bruno Fernandes and team-mate Daichi Kamada — are both number 10s who aggressively attack the box. Kostić, remember, is ostensibly a wing-back. No player with at least 1500 minutes can better Kostić’s 2.1 chances created in open play per 90 minutes either.

No Frankfurt player has completed more balls into the box (11.5 per 90) or taken more shots (2.7 per 90) than the 29-year-old in the Europa League this season and he has 19 direct goal contributions in Europe and the Bundesliga combined.

In the Europa League alone, the Serbian has directly contributed to 61 of Frankfurt’s shots, through a potent combination of shooting himself, creating chances for team-mates and build-up play. Only S.C. Braga’s Ricardo Horta (68) has contributed to more in the competition this season.

The supporting cast (or the main men, really) have changed over the years, with Sébastien Haller, Luka Jović, Ante Rebić, Bas Dost, and André Silva all moving on but Kostić has remained just as productive no matter who is leading the line.

And it isn’t all just end product: Kostić ranks third in the squad for touches per 90 (69.6) if you ignore the impact Gonçalo Paciencia has had during his 162 minutes on the pitch. Frankfurt’s game is focused on both flanks but particularly the left, where their main man can get at defences.

The funny thing about this final is that Rangers will want it focused down the same wing, with their play going through Tavernier. In fact, they tilt the pitch that way even more than Frankfurt do. Tavernier usually plays behind a winger but he’ll be up against Kostić, one-on-one, without any support if Van Bronckhorst does once again look to match the three-man backline of a Bundesliga club.

Tavernier averages more touches per 90 (81.5) than any other Rangers player in the Europa League this season, and the most balls into the box (8.4) just like Kostić on the opposite side. Tavernier is able to add danger to his side’s sequence like no other player in the Europa League this season, too. The sequences he’s been involved in for Rangers have amounted to 7.5 expected goals in total, a higher sum than any other player in the competition.

Against RB Leipzig, who also have an attack-minded left wing-back in Angeliño, Tavernier held the width and combined with Scott Wright inside him whenever Rangers attacked on that side. When they attacked on the other wing, Tavernier would get into the box and he scored the opener, ghosting in behind Angeliño to tap in a cross from the left.

Across the two legs, Tavernier had the most touches (122) and most completed balls into the box (11) of any Rangers player, while only Joe Aribo could better the right back’s tally of 21 passes completed in the final third. But while he was so influential in possession, he couldn’t do enough to stop Angeliño’s influence going the other way.

Over the 180 minutes, the Spaniard had the fourth most touches of any Leipzig player, the third most shots, and the most completed balls into the box (17) and successful crosses (4) as well, creating Christopher Nkunku’s goal at Ibrox with a brilliant ball in. Tavernier isn’t often dribbled past for a full back – 0.6 times per 90 in the Scottish Premiership, which is slightly below average for a full back in that league – but, playing as a right-back in a back five rather than a back four, he did not defend aggressively enough against his direct opponent. If Kostić has time and space to hurt Rangers, he most likely will.

The Europa League final is poised to be superb and it is fantastic that it will be played between two teams who nobody would have expected to get this far. It is too tight to call, with Frankfurt bringing their A-game with incredible consistency in this competition, while Rangers’ route to the final has already seen them beat two Bundesliga sides who will be in the Champions League come September, both of whom remained unbeaten across four games against Frankfurt themselves this season. One way or another, one of football’s newest trends — the development of the wing-back — is going to be decisive as Kostić and Tavernier go head-to-head.