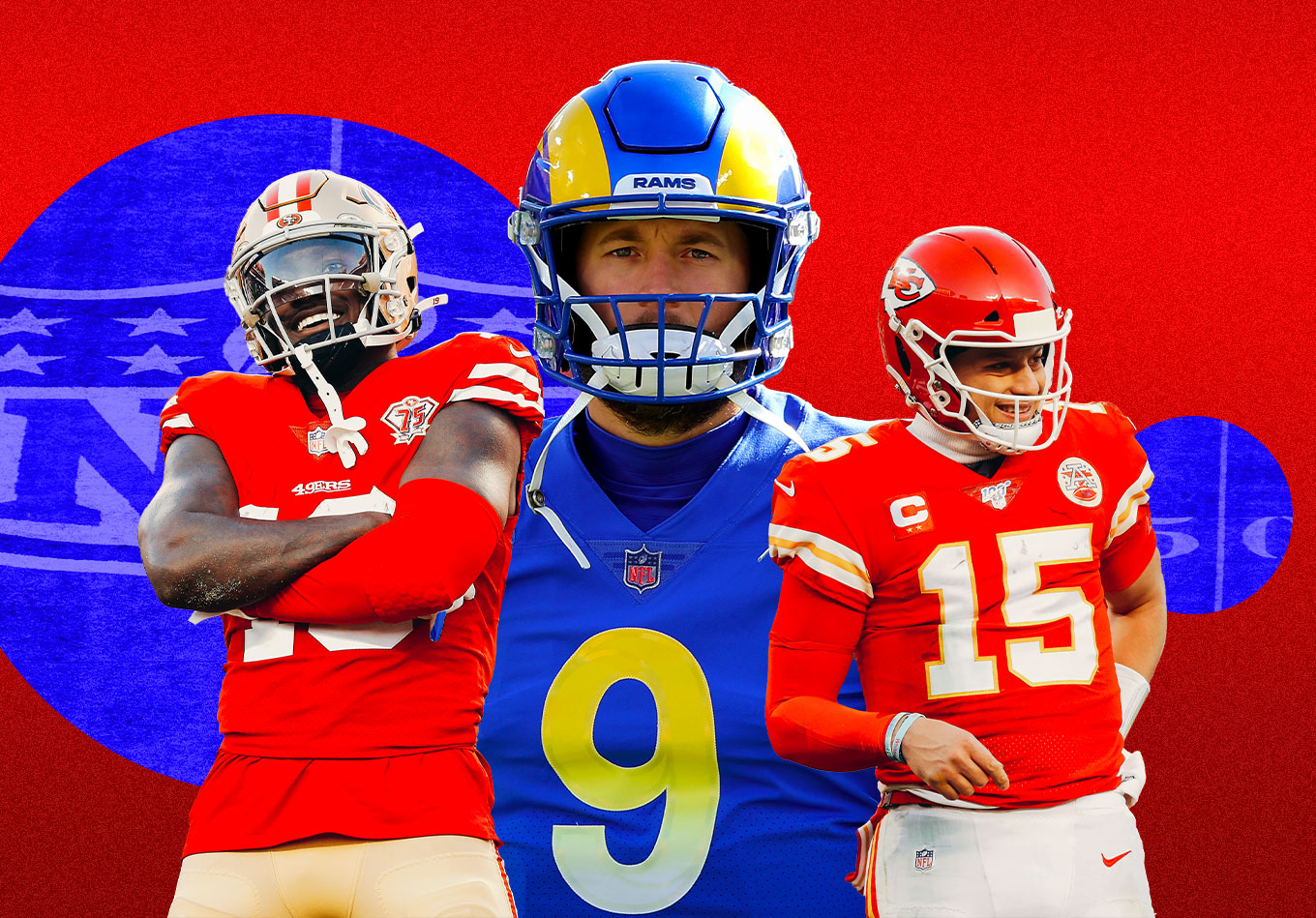 NFL Team Rankings: Who Has Risen to the Top This Offseason?

The dizzying thrill ride of the 2022 NFL offseason is finally slowing down, with all 32 teams set to fill out the remainder of their rosters by adding a pool of rookies at this year’s draft in Las Vegas.

Yet with star names and quarterbacks both lacking, the draft (April 28-30) is unlikely to provide drama to match the massive personnel moves that swept the league over the course of last month.

To recap: Russell Wilson was traded to the Denver Broncos, Deshaun Watson to the Cleveland Browns, Davante Adams to the Las Vegas Raiders and Tyreek Hill to the Miami Dolphins.

Oh, there was also the small matter of Aaron Rodgers’ mega contract with the Green Bay Packers, Carson Wentz’s trade to the Washington Commanders, Matt Ryan swapping the Atlanta Falcons for the Indianapolis Colts and some guy named Tom Brady coming out of a 40-day retirement to return to the Tampa Bay Buccaneers.

But how has this hive of activity impacted the balance of power in the NFL? Who are the true contenders and who will likely be looking towards 2023?

We can offer an answer to those questions by looking at how free agency and the plethora of big-time trades have changed our team rankings.

The rankings are produced through a model that inputs data from seven different units: quarterback, pass blocking, run blocking, route runners, pass rush, run defense and pass defense. The units are comprised of projected playing time for players on the roster combined with the player baselines linked to each of those units.

An individual player has a year-over-year baseline for a unit input (i.e. pass blocking for a team’s projected left tackle). His baseline is combined with those of his teammates – in this case on the offensive line – and then adjusted for the importance of the position to that unit to produce an overall unit baseline.

With the focus finally switching to this class of draft prospects, what can we glean from the changes to the rankings (listed below) following an offseason to remember?

With Wilson heading to Denver, Adams also moving to the AFC West and Watson staying in conference with his controversial trade from the Houston Texans to the Browns, a consensus has quickly emerged that the AFC is significantly deeper than the NFC.

Yet the rankings tell a different tale.

Seven of the top 12 places are occupied by NFC teams, suggesting that while the competition on the fringes of the playoffs may be more fierce on the AFC side, it’s the NFC that has a greater number of teams who can realistically hold championship aspirations.

The order of those NFC franchises may raise eyebrows, with the top four gatecrashed by a surprise name.

The Philadelphia Eagles were comfortably dispatched by the Buccaneers in the wild-card round of the playoffs. Tampa Bay brought back Brady and a host of other key free agents to seemingly keep its championship window open, yet the Bucs and several other supposed NFC heavyweights find themselves looking up at Philadelphia.

The Eagles’ lofty position in the rankings is based on their strength in the trenches. They have the top unit baselines for both pass protection and run blocking, meaning they are excellently set up to provide clean pockets for Jalen Hurts and facilitate success for a diverse running game of which he’s an integral part.

After suffering an agonizing defeat in arguably the greatest playoff game in NFL history, the Buffalo Bills’ offseason business has seen them installed as Super Bowl favorites.

Between the signing of the seemingly ageless Von Miller on the edge, the additions of DaQuan Jones and Tim Settle on the interior of the defensive line, Rodger Saffold coming in to play guard and a low-risk dart throw on tight end O.J Howard, the Bills have improved a roster that was already firmly among the league’s best.

However, their astute work in free agency does not even have them at the top of the AFC, never mind the league as a whole, with both the Kansas City Chiefs and Browns above them in the rankings.

The reason? Run blocking, primarily. Buffalo’s run-blocking baseline is tied with the Seattle Seahawks for the fifth worst in the NFL.

Mediocre in both pass protection and run defense, the baselines indicate there are still plenty of areas where this team can make further strides. However, with Miller boosting a pass defense that trails only the Buccaneers in unit baseline, the Bills may already believe they have addressed the biggest area of concern after once again failing to stop Patrick Mahomes in the postseason.

What’s the Value of a Veteran Quarterback?

According to our rankings, 10 spots.

The San Francisco 49ers might be concerned by their inability to trade Jimmy Garoppolo as they look to hand the reins of Kyle Shanahan’s offense to last year’s third overall pick Trey Lance. However, were they to stick with Garoppolo under center, they would be second behind the Rams in the rankings.

With Lance, who started two games last year in relief of the oft-injured Garoppolo, they’re down in 12th.

It should not be a surprise at this stage that Garoppolo gives the Niners a higher baseline of quarterback play. The problem is that he’s regularly failed to elevate himself, and the 49ers offense, above that baseline. San Francisco’s NFC championship game defeat to the eventual champion Los Angeles Rams was an illustration of that as Garoppolo proved unable to finish the job in a game the Niners led 17-7 in the fourth quarter.

The range of outcomes for Lance is wider and that volatility is reflected in the Niners dropping from the best of the best to just outside the top 10 in the rankings. However, the ceiling for the offense is higher than with Garoppolo, with Lance offering glimpses of that upside during his 70 throws in 2021.

Lance averaged 10.10 air yards per attempt – the second most among quarterbacks with at least 50 attempts. No quarterback to average at least 9.0 air yards produced a higher number of well-thrown balls than Lance, who was accurate on 77.1% of his passes.

If Lance shows the same level of accuracy while still being as aggressive in 2022, the 49ers will likely soon be surging back to the higher reaches of the rankings.

The Dolphins didn’t just pull off a stunning trade with the Chiefs for Tyreek Hill, they also signed three-time Pro Bowl left tackle Terron Armstead and added significant weaponry to their running back room with the additions of Raheem Mostert and Chase Edmonds.

Having hired Mike McDaniel, who played a substantial role in the design of Shanahan’s San Francisco offense and particularly the run game, it’s fair to anticipate a bump in production from the Dolphins’ Tua Tagovailoa-led offense, while on the defensive side cornerback Xavien Howard was signed to a lucrative long-term extension.

So we can expect a playoff challenge from Miami in 2022, right?

Wrong. At least according to the rankings, which has the team 23rd.

The reason for their lowly position is tied to Tagovailoa, whose baseline is the ninth lowest among the projected starting quarterbacks.

Additionally, the model also appears to have concerns about Miami’s ability to pass protect, despite Armstead’s arrival, and is not a fan of the Dolphins’ run blocking or pass rush units.

The Dolphins, therefore, still have a lot of areas to address in the draft. If only they hadn’t traded most of their premium picks to Kansas City.

The rankings encapsulate the task facing Chicago Bears general manager Ryan Poles and head coach Matt Eberflus as they look to guide the franchise back to being competitive.

Yes, they have a quarterback who displayed flashes of brilliance in his rookie year, but the Bears are dead last because they have little in the way of help for Justin Fields.

The trenches are the Bears’ biggest problem as Chicago ranks second to last in pass protection baseline and third to last in run-blocking baseline.

Run defense is where the Bears perform best, but while that still carries importance even in a league dominated by the passing game, the fact the roster is deficient in so many areas illustrates the uphill climb Fields and Co. have ahead of them.