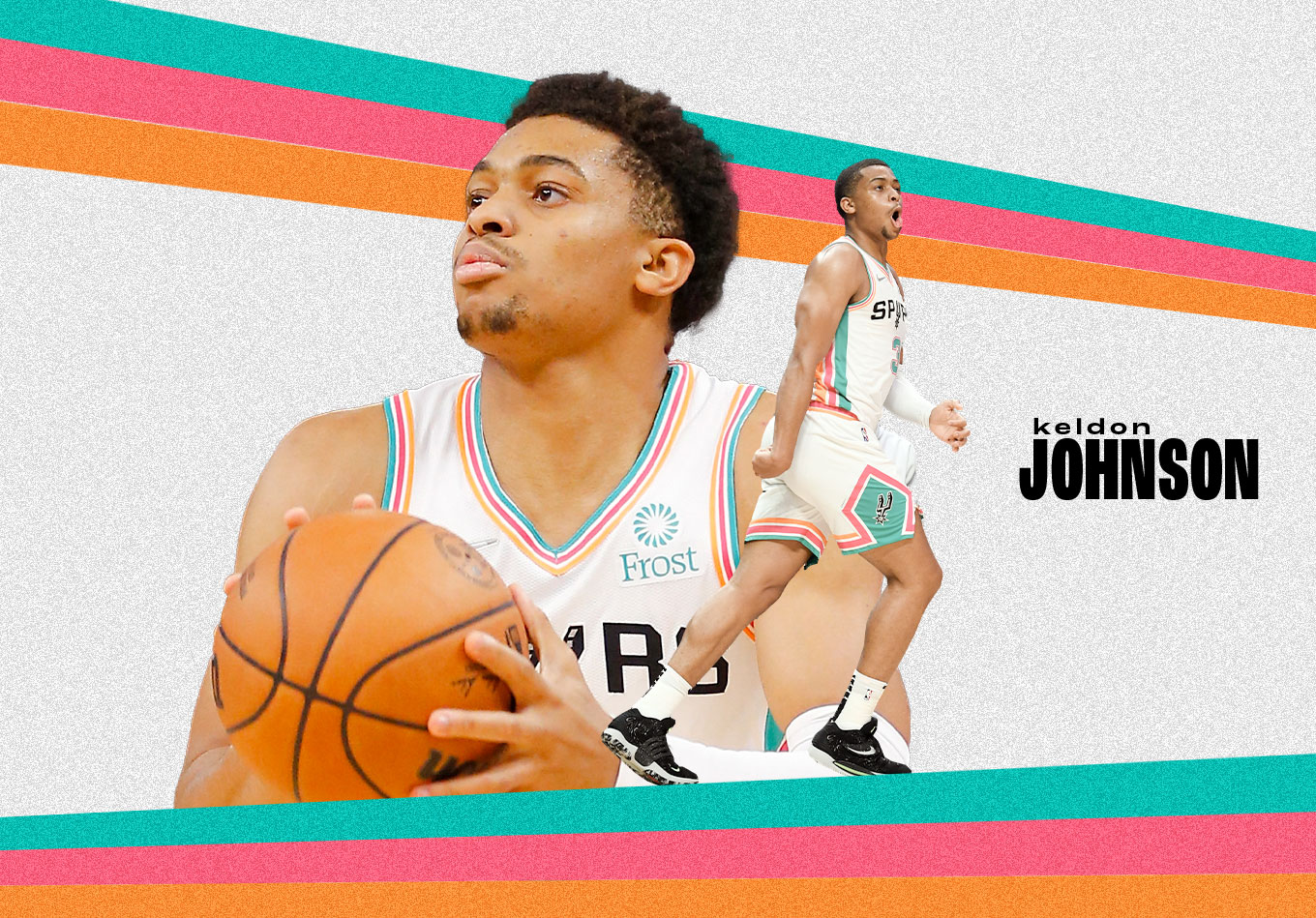 Ever since the famous anecdote that LeBron James and Dwayne Wade entered the 2008-09 season with an enhanced level of focus following their first Olympic Gold Medal, a narrative that young players emerge from their overseas odyssey a new player has taken on a life of its own.

And for most of the season, Keldon Johnson failed to live up to this post-Olympic standard for the San Antonio Spurs. Once a dark horse candidate for the NBA’s Most Improved Player, Johnson only ranks 42nd in our DELTA statistic (minimum 1000 minutes played) – a useful reference in determining one’s standing in the award race.

However, Johnson has flashed signs of serious improvement during the regular season’s final act. In the last nine games, he’s averaged 22.7 points and 6.1 rebounds on a whopping 60.6% true shooting.

The most salient of his game this year has been his catch-and-shoot 3-point shooting, which at first glance is reminiscent of fellow third-year player Cameron Johnson.

Along with simple standstills, both forwards have the wherewithal to can treys following a handoff, popping off a screen, or lifting from the corner to the wing.

After a scorching hot winter (46.6% on 3s from November to January), Johnson’s outside shooting has come back to Earth a bit.

With that said, if he can maintain the 3-point shooting and volume outputs he’s achieved over the last nine games (37.9% on 7.3 attempts per game), he’s still contributing a solid 1.14 points per possession.

It’s also important to note that despite his diminished 3-point percentage, Johnson boasts a slightly higher true shooting percentage after the All-Star break (57.8%) than he did prior to the midseason classic (57.1%).

Part of the reason his efficiency numbers have stayed afloat is his hellacious drive game and ability to leverage that “Big Body,” much like budding star OG Anunoby (comparison shown in the clips below).

It’s also worth mentioning how visually enticing it is watching a forward put back his own misses like he’s Moses Malone.

Johnson’s barrage at the rim has led to an increase in free throws. He’s shooting 5.1 per game during this recent stretch after attempting less than three per game over his first 66 contests. And it makes him a 75.6% free-throw shooter, so he’s creating a look that nets him 1.5 points per possession (an even higher efficiency than the 3s he was taking from November to January).

But what’s arguably even more important is his increase in passes off of his drives.

In the case of Johnson, we’re witnessing his metamorphosis as a driver take place firsthand. Where he once drove to the rim with the myopia of a raging bull, he now glides through the lane surveying his terrain like a full-fledged bird of prey.

Even with his incremental growth as a passer, Johnson still has a few levels to climb before he reaches the apex of the playmaking food chain. He still misses plenty of lay-down passes (like this one) and his assist-to-turnover ratio (1.72) pales in comparison to less offensively-gifted forwards like P.J. Tucker.

On the defensive side of the ball, Johnson has a low “stock” (steal + block) rate (1.44 per 48 minutes) and a minus-0.7 defensive DRIP (our Daily-updating Rating of Individual Performance), but his physical tools present a potential remedy to his current ailments.

That herculean strength that he features in his explosions at the rim can be leveraged on the opposite end of the court to enable him to scale up to the four spot where he can focus on stonewalling endeavors near the paint.

Here are some examples during his recent stretch in which he trades blows with Jaren Jackson Jr. and Jae’Sean Tate – a pair of brutes in their own right:

In that second clip, Johnson’s “Big Body” is so powerful that a head-on collision with it forces Tate to forfeit the ball.

Now, what most are probably thinking is, so what? Young players experience brief periods of prosperity like this all the time and almost always, nothing permanent ever comes from it.

But those following that line of reasoning would do well to recall Johnson’s past body of work. He’s a former five-star recruit, a credentialed member of the sacred Blue Blood lineage and a gold medal touting Olympian. By all accounts, he was destined for greatness.

The Spurs will need every iota of that greatness Wednesday night when they face off against the New Orleans Pelicans in a single-game elimination matchup.

In these winner-take-all showdowns, the volatility of a single player’s shooting can be the difference between winning and losing. For the Spurs, no player currently rostered has a greater difference in true shooting percentage in wins and losses than Johnson (minimum 500 minutes played). This year, Johnson shot 11.3 percentage points higher in wins (63.8%) than he did in losses (52.5%) –meaning his contributions will play a heavy hand in the final outcome.

With this in mind, and considering the fact that the Spurs played a measly five nationally televised games, the stage is set for Johnson to prove that his recent play is a trend that’s here to stay.