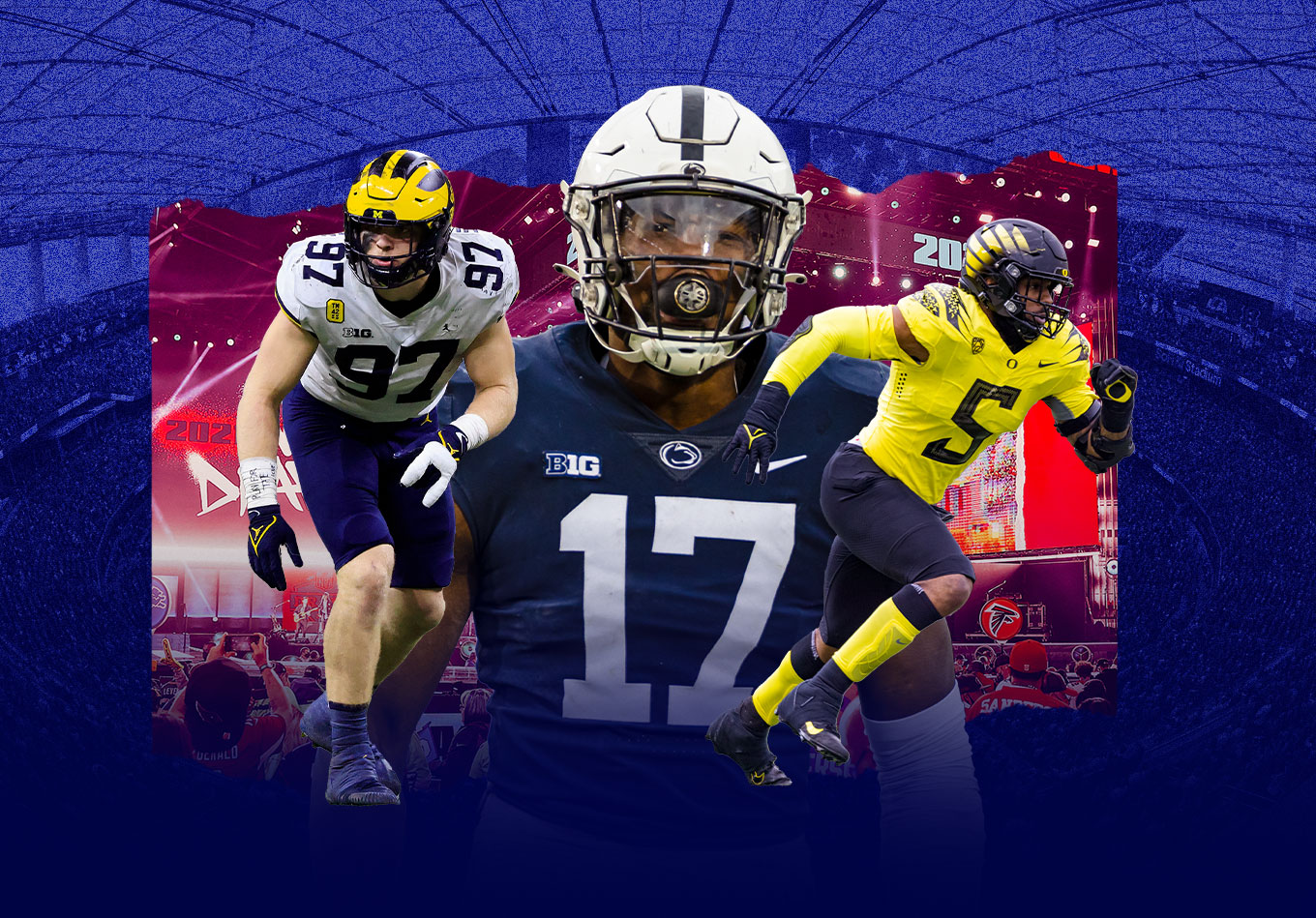 The overarching narrative surrounding the 2022 NFL Draft is well established.

It’s not a star-studded class, but it’s a deep class. And nowhere is this draft deeper than at edge rusher.

NFL teams place a premium on players who can get after the quarterback, but this year they may not have to spend a premium pick to land a prospect who can make an immediate difference at the highest level.

Like quarterbacks, top pass rushers get pushed up the board, but some teams may be content to wait until Day 2 of this year’s draft to boost their front seven because they know there will still be a host of talented edge players available.

Though the draft is a subjective exercise by its very nature, a look at the pressure numbers for the top edge rushers in this class provide an idea of how they should be stacked as opening night in Las Vegas draws ever closer.

He may not end up as the first overall pick of the Jacksonville Jaguars, but Michigan’s Aidan Hutchinson has the most compelling case as the most complete and the most ‘pro-ready’ edge rusher in the draft.

Hutchinson has the flexibility to bend around the edge, but he can also win with his bull rush and he has the quickness to successfully attack the inside shoulder of opposing offensive tackles.

Boasting a well-refined repertoire off pass-rush moves, including the cross-chop, two-hand swipe, rip, club and swim, Hutchinson’s pressure rate of 31.3% when lined up on the edge in 2021 was tops among all edge prospects. And only Nolan Smith of Georgia (19.3) and UAB sleeper Alex Wright (18.7) had a better overall run disruption rate than Hutchison (17.9).

Yet while Wright recorded 11.5 sacks in three seasons at a Group of Five school, Hutchinson recorded 14 in the 2021 campaign as he helped Michigan reach the College Football Playoffs.

He also demonstrated considerable prowess against the run, registering double-digit tackles for loss in 2019 (10) and 2021 (16.5).

Beating a man on 72 of his 85 pressures in 2021, Hutchinson has an array of tools by which to defeat pass protection and will enter the league as a high-floor, day-one contributor.

Should the Jags choose to go in a different direction, the team that lands him may be sending thank you cards to Jacksonville for years to come.

At the start of last season, it would have been tough to find much debate around Oregon star Kayvon Thibodeaux, a prospect almost universally seen as a future top-five pick.

Now there are questions over whether he will even go in the top 10.

Any potential fall down the board will not be down to his ability to generate pressure, which he did on 24.5% of his pass-rush snaps in 2021.

Instead, doubts around Thibodeaux seemed to be tied to a perceived lack of effort and concerns over his love of the game, a reflection of the archaic way in which the league often views prospects who have the temerity to have outside interests away from the field.

Any such worries over his other interests should certainly not overshadow Thibodeaux’s consistently outstanding performances, which have seen him create pressure through his excellent first step and ability to translate speed to power.

Indeed, Thibodeaux can generate an exceptional bull rush, but he can also bend around the edge and has the quickness to win to create disruption up the middle. His tremendous physical traits supplemented by a well-stocked repertoire of pass-rush moves.

With 35.5 tackles for loss and 19 sacks in three seasons, Thibodeaux has the production, the athleticism and the tape of a sure-fire top-five prospect. More bemusing than talk of him falling down the draft is the hype around the player who could well go No. 1 overall.

Georgia’s Travon Walker has the athletic gifts over which teams salivate, running the 40 at the NFL Combine in 4.51 seconds at 272 pounds, yet he does not have the production to back it up. His tape from an extremely successful collegiate career with the Bulldogs left more questions than answers.

Deployed primarily as a run defender and often asked on passing downs to either drop into coverage or open up rushing lanes for blitzing linebackers, Walker had only 9.5 sacks in college.

That six of those came in 2021 could be seen as a sign of progress. However, Walker’s 12.0% pressure rate reveals he may still have a long way to go as a pass rusher.

Between his obvious explosiveness and the power he has in his hands, Walker is, in essence, an exciting project for the right defensive line coach to mould. However, the presence of more proven higher-floor pass rushers at the top of draft makes the prospect of the Jaguars putting the burden of rapidly developing him a needless risk.

If the Jags are determined to hitch their wagon to a former Georgia star with only one season of college production, they would be better served by choosing Jermaine Johnson II.

Johnson transferred from Georgia to Florida State and thrived on a poor Seminoles team in 2021, racking up 11.5 sacks and 17.5 tackles for loss.

A force against the run in his lone season in Tallahassee, Johnson’s pressure rate of 16.8 does not paint the picture of an elite edge prospect.

However, only Hutchinson had more adjusted sacks (18) than Johnson’s 17, a two-hand swipe move and a spin move helping him beat a pass protector on 40 of his 50 pressures. If he can become more consistent in pairing his explosiveness with leverage and use his flexibility to turn the corner more regularly, Johnson has a chance to emerge as the cream of this year’s crop.

Penn State’s Arnold Ebiketie is another transfer who made the most of his change of scenery, excelling in his single year with the Nittany Lions after switching from Temple. He used his long arms to superb effect as he posted a pressure rate of 21.1% and his success in getting into the pads of opposing pass protectors allowed him to record 9.5 sacks and 18 tackles for loss.

Ebiketie is still building his pass rush weaponry but he blends leverage, speed and power to win with his bull rush. Able to win to the inside and around the edge, the arrow is pointing up for Ebiketie and there will be no shortage of teams ready to try keep him on that trajectory in the pros.

Explosiveness and power are the calling cards of Purdue’s George Karlaftis, who, after playing only two games in 2020, had a pressure rate of 21.9% last season.

Only Hutchinson and Wright beat a pass protector more often than Karlaftis (47) and the former Boilermaker figures to soon be testing the anchor of tackles around the league after consistently putting Big Ten competition on skates.

Each of that trio is likely to come off the board on Day 1. That same honor probably won’t be afforded to South Carolina’s Kingsley Enagbare or Drake Jackson of USC, though both had top-five pressure rates in 2021.

Enagbare (24.6) has an array of moves to rival Hutchinson and a bull rush akin to that of Karlaftis when he puts it all together, but a lack of speed and flexibility to turn the corner may force him to wait until Day 2. Jackson (24.2) was third in adjusted sack rate (6.7%) and flashed dominance with his first step and dip to get around the edge, but a failure to truly take over games at the Pac-12 level will likely mean his celebrations will have to wait until the Friday of draft week.

Hutchinson’s former Michigan teammate David Ojabo would almost certainly be in the first-round mix had he not suffered an Achilles injury during his pro day.

Due to that misfortune, teams must now decide whether they’re willing to take a risk on a player who may not be healthy enough to contribute significantly as a rookie.

Agreeing to that gamble will mean putting faith in Ojabo’s long-term potential, which is undoubted.

Nigerian-born Ojabo moved to the United States from Scotland in 2017 and originally played basketball before turning his attention to football.

Still relatively inexperienced, Ojabo has enticing room to grow. But at the same time, he demonstrated impressive polish as he broke out in 2021 with 11 sacks and 12 tackles for loss.

With a pressure rate of 21.3% and the highest adjusted sack rate in the class at 7.6%, Ojabo can get the better of pass blockers through a number of avenues. He has the speed to get around the edge, has developed an excellent spin move, and possesses a rip move with which he has also found success.

For a player who came to the sport late, Ojabo has also demonstrated impressive awareness of the importance of playing half a man when rushing the passer.

Encouragingly refined but still boasting untapped potential, there’s obvious risk in taking Ojabo. But depending on the progress of his recovery, he could quickly make an impact as a designated pass rusher on third down.