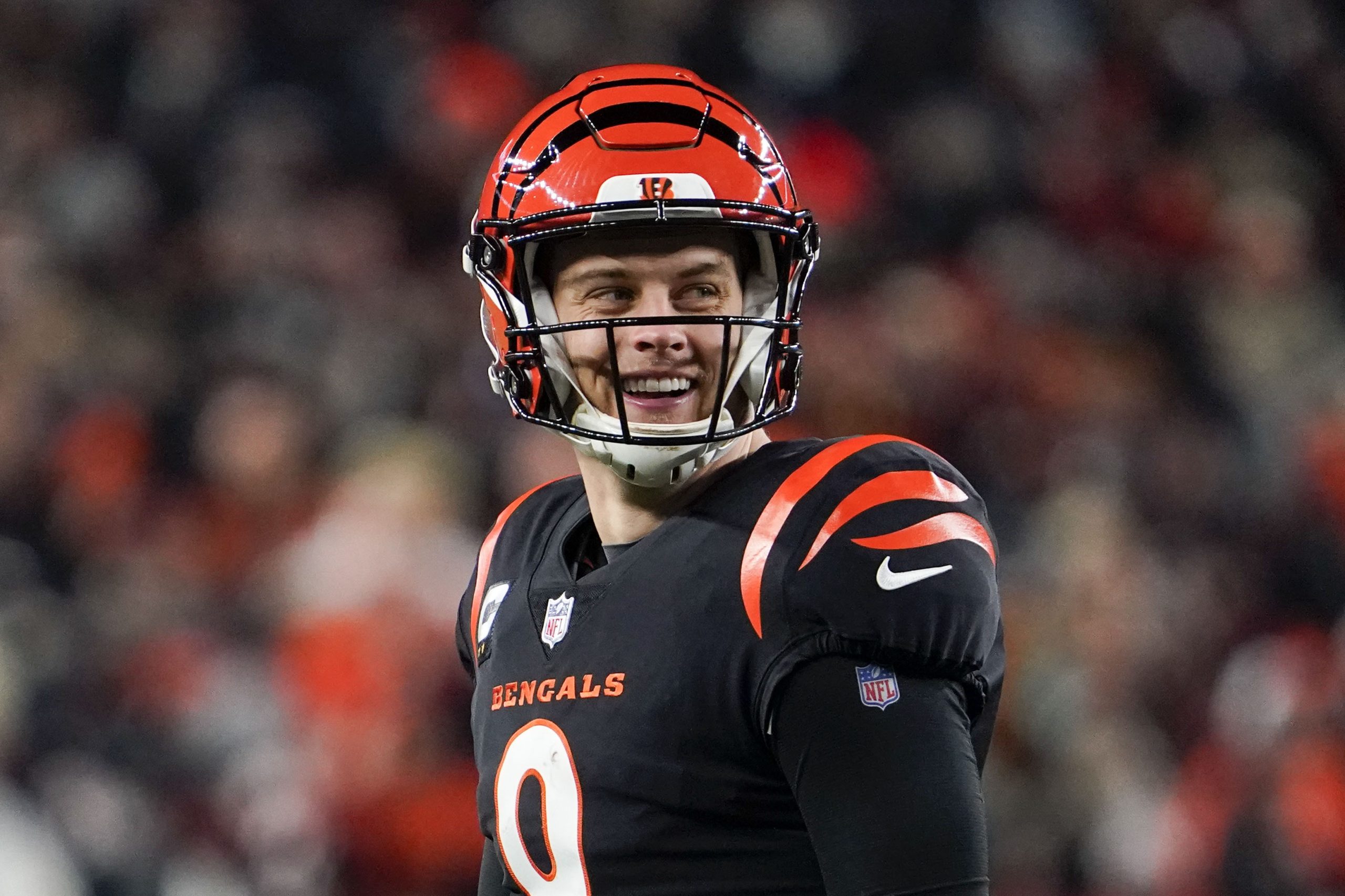 The NFL Pro Bowl looks like an extremely fun time for all concerned, particularly this year in Las Vegas, but it is hardly representative of who the very best players were during the 2021 season.

With Super Bowl participants obviously not playing and a host of players dropping out to allow their bodies to heal from the rigors of playing a 17-week season plus postseason campaigns, this glorified scrimmage does not really live up to the title of ‘All-Star Game.’

The Associated Press All-Pro team is seen as a better measure of who was among the elite in a given season, but even that is dependent on the subjective opinion of a panel 50 journalists.

There are a host of measures by which we can gauge who performed at the highest level, and we have used those to create The Analyst’s All-Pro team for 2021.

An appearance in the Super Bowl is no more than the Houdini-esque Burrow deserves. He led all quarterbacks (minimum 200 attempts) with a well-thrown ball on 86.5% of attempts and was fourth in QB EVE – yards gained over expected in expected passing situations. Rodgers was second in the latter category but his well-thrown percentage of 77.8 comfortably trailed that of Burrow.

The heartbeat of the Colts’ offense, no player could match Taylor’s efficiency relative to his volume. He carried the ball 332 times compared to Chubb’s 228 and still averaged under a yard less per carry than the Browns star (5.45 yards to 5.52) while essentially matching him in yards before contact per attempt (3.41 to 3.44) and equaling Chubb in yards after contact per rush (both 2.17). The only area where Chubb had a clear advantage was on yards per carry with a run disruption, where he averaged 4.33 to Taylor’s 3.51.

No wideout with 100 targets had more burn yards per route than the Rams’ conference championship game hero Kupp, who averaged 4.0. Jefferson (3.7) was close, while Evans’ combined win percentage against both man and zone coverage of 50.46 was tops for all receivers with at least 100 matchups. Evans also led all receivers with 100 targets with a big-play rate of 43.1%, a list on which Chase (37.5) was third behind Jefferson (38).

Kelce enjoyed another season in which he reaffirmed his status as the top receiving tight end in the game, with a combined win percentage against man and zone second of 40.68 second only to Darren Waller (46.32), who played in only 11 games. Kittle still has a case for the title of the most complete player at his position. He was top five in burn yards per route at his position with 3.1 and ranked sixth among tight ends with at least 50 one on one run-blocking matchups with a double-team adjusted win rate of 81.69%. No tight end had more than his 129 one on ones.

Dissly (82.54%) was one of the few tight ends to produce superior play when it came to run blocking. Lewis (79.67) also thrived in that area while also finishing 11th among tight ends with at least 10 targets in burn yards per route with 2.4.

Williams deservedly received some NFL Offensive Player of the Year talk through finishing second among tackles with a minimum of 125 one-on-one matchups in stunt adjusted pass protection win rate (91.81%) and first in double-team adjusted run block win rate (84.07%). No player had more pass protection one on ones than Slater’s 358 and he still managed to win 90.51% of them.

No guard had more one on one run-blocking matchups than Bitonio, yet he still led all guards with a minimum of 100 with an adjusted win rate of 84.18%. He was also third in adjusted pass protection win rate (88.47), a list on which Marpet (87.14) was fifth.

Jensen led all centers with an adjusted run block win rate of 85.33%, while Humphrey’s hugely impressive rookie season so him finish second in that category on 84.40%.

No guard had a better adjusted pass block win rate than Martin’s 89.17% but Zeitler, who remains the picture of dependability, ran him close on 88.65. There was not much to separate them as run blockers, either, with Martin’s win rate of 83.69% putting him second behind Bitonio for guards with Zeitler (82.49) third.

It is no surprise the Buccaneers’ pass protection fell off a cliff in the divisional round without the injured Wirfs, who ended the regular season tied for first with Tyron Smith among tackles with an adjusted win rate of 93.69. However, Wirfs was involved in 315 one on one matchups compared to 189 for Cowboys left tackle Smith. Johnson trailed that duo on 89.61 but his pressure rate allowed of 3.8% was second only to Wirfs among right tackles with at least 200 pass protection snaps.

It’s impossible to leave Samuel off a list of the best players in the NFL, but it is also tough to list him as a traditional wide receiver given how the 49ers used him during their surge to the NFC championship game. Third in the NFL with 1,770 scrimmage yards in the regular season, the self-described ‘wide back’ was a monster after contact. Kareem Hunt (2.84) was the sole running back (min. 50 carries) to average more yards after contact per attempt per rush than Deebo (2.67) when he lined up in position for a downhill carry. Among receivers with at least 100 targets, CeeDee Lamb and Chase were the two players to post a better rate of missed tackles per touch than Samuel.

A case does not need to be made for Donald, but here’s this piece of supporting evidence: His stunt-adjusted pass rush win rate of 63.83% was not only the highest for all defenders with at least 100 one on one matchups, it was over 10 percentage points higher than his nearest challenger, Myles Garrett (53.56). He was the only interior defensive lineman with a higher adjusted sack rate (5.5%) than Armstead (5.0). Save for Donald, Jones was the only other defensive tackle with a pressure rate of 22% or above to post a run disruption rate of 25% or higher.

Watt had the best adjusted win rate (45.27%) among stand-up outside pass rushers in another dominant season for the perennial NFL Defensive Player of the Year contender while Miller (43.40) was second in that regard as he has revitalized his career in Los Angeles. Ingram paired his win rate of 35.10% with a run disruption rate of 24.2% fifth among players with 100 edge snaps as he proved a trade steal for the Chiefs.

The aforementioned Garrett’s status as the top 4-3 edge rusher in the NFL was strengthened by another outstanding year for the underwhelming Browns, though he has plenty of competition. Crosby’s 244 one-on-ones were the second most in the NFL and he won 113 of them, putting him third behind Bosa (47.92) in adjusted win rate after the 49ers star won 85 of his 175. Franklin-Myers (41.80) was not the the only bright spot on the Jets’ defense.

Wagner allowed a big-play on 9.7% of his 60 targets in 2021, fourth-best among middle linebackers targeted at least 25 times. Top of that list was Davis (4.4%), who also was the premier player at the position in terms of combined open percentage allowed across man and zone coverage (11.95) with the consistently superb (14.60) not far behind despite an apparent down year during the regular season.

Deployed frequently at the star position in the Rams’ defense, Ramsey’s burn yards per target allowed average of 5.98 was the best for players with at least 25 targets while playing inside corner. Hall played more man matchups than anyone with 235 and yet had the best combined open percentage allowed (14.61) of any corner to reach three figures. Hayward (14.83) was second with Slay (17.17) narrowly trailing the excellent Ramsey (17.07).

Across 107 matchups in man and zone, Byard’s combined open percentage allowed of 14.32 was first among safeties with at least 100. Mathieu did his best work in the slot, allowing 0.79 burn yards per snap, the third-best rate among defenders with a minimum of 50 coverage snaps at inside corner.

It was a breakout year for McKinney, who along with Simmons was one of six safeties to snag five interceptions in 2021. No safety had more than five picks and it was McKinney who was superior when it came to coverage, allowing a combined open percentage of 17.07 that trailed only Byard and Eric Rowe, though Simmons (18.65) was again among the elite.

Linebacker or designated pass rusher? Regardless of what you think Parsons’ role is, what is not up for debate is that he is worthy of a place on any All-Pro team. The likely Defensive Rookie of the Year’s pressure rate of 32.2% on 211 pass rush snaps was even superior to that of Donald while has run disruption rate of 13.7% was fourth among all linebackers.