Which Pass-Catchers Are the NFL’s Best and Worst at Getting Open? | The Analyst 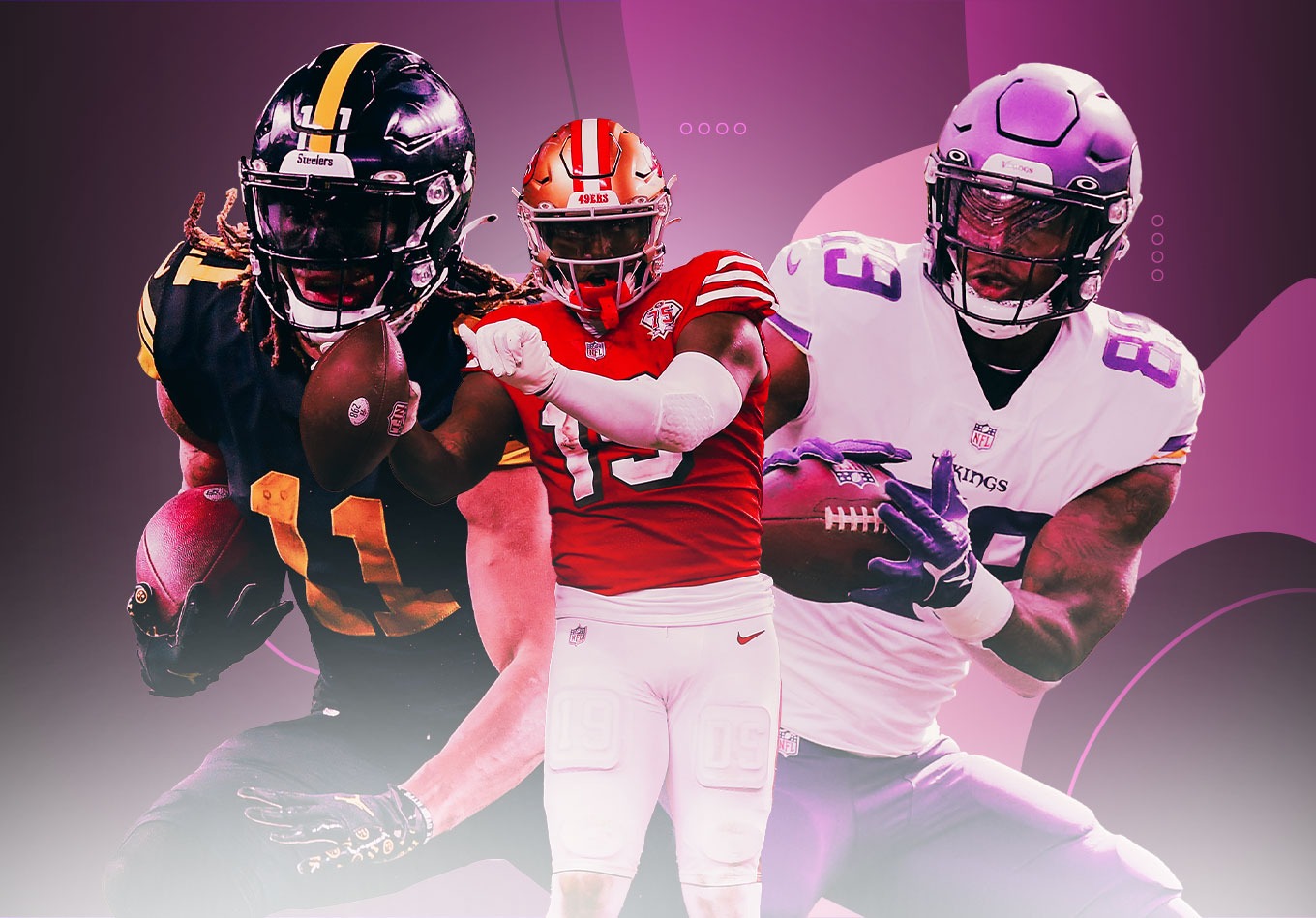 It’s said quite often that a quarterback’s receivers “aren’t getting open for him.” Using metrics like man-coverage open percentage, we can actually measure which pass-catchers help or hurt their QB with their ability – or inability – to create separation.

The NFL is a passing league.

If a team has a quarterback who can elevate those around him and an offensive line that can protect him, chances are they will be well-positioned to contend for the playoffs.

Though the elite quarterbacks in the league can fit the ball into tight windows on a consistent basis, the odds of success on that side of the ball are much higher when those signal-callers are paired with receivers who can defeat man coverage and get into open space.

Excelling at finding the soft spot in zone coverage is also important, while the top play-callers in the NFL frequently engineer space for their receivers. Yet receivers who can win one-on-one matchups are a tremendous help to quarterbacks, especially those who can defeat the blitz regularly with their ability to efficiently read the field and find the open man.

While determining the ‘best’ receiver in the NFL is a subjective process that can hinge on an affinity for certain styles of play, success in beating defenders in coverage can be quantified.

For our purposes here, the man-coverage open percentage (Open%) we’re using measures how often a receiver gets open when going against man coverage with enough time to run a route. Plays that break down before a matchup with a defender can take place or scramble drills in which a receiver uncovers after running his initial route are discounted.

So who are the best and worst in that regard? Here we look at the top performers, some surprise names uncovering more often than perhaps expected and those who rarely separate from defenders.

A year in which Cooper Kupp leads the NFL with 1,141 receiving yards has seen him established as arguably the premier route runner in the NFL.

That is reflected by his man-coverage Open% of 57.75, which is the highest of any player with more than 10 coverage matchups. Getting open on 41 of his 71 matchups, Kupp has consistently excelled at creating separation.

His burn percentage (Burn%), which measures how often a receiver wins his matchup with a defender when he’s targeted, of 65.2 is above the average of 60.3 for wideouts (min. 10 targets), while he is fourth in the NFL in burn yards per route (4.2).

Joining Kupp near the top of the tree is Justin Jefferson of the Minnesota Vikings. Proving his record-breaking rookie year was no fluke, Jefferson has faced 108 coverage matchups and gotten open on 55 of them – good for an man-coverage Open% of 50.93.

Eleventh among receivers with a Burn% of 73.4 and averaging 3.3 burn yards per route, there has been no sign of a sophomore slump from Jefferson, whose combination of separation ability and prowess at the catch point has turned him into one of the most dependable and dynamic receivers in the league.

Keenan Allen (53.16) is Kupp’s closest challenger. The Los Angeles Chargers veteran remains one of the NFL’s most underappreciated receivers by getting open at a rate that may only heighten frustrations around his team’s underperforming offense.

Kansas City Chiefs star Tyreek Hill (47.78) boasts an elite Open% that belies his underwhelming big play rate of 28.0%, with Stefon Diggs’ (47.62) success at getting open dispelling the notion of a drop-off from last year’s receiving leader. Davante Adams (45.65) is unsurprisingly also among the league’s best, yet he is accompanied by some eyebrow-raising names.

It has been tough to watch an uninspired Pittsburgh Steelers offense this season and think anyone is getting open.

Almost every passing play the Steelers run seems to end in a contested catch, yet a wideout who thrives in those situations is also winning the vast majority of his coverage matchups. Indeed, second-year wideout Chase Claypool ranks behind only Kupp and Allen in man-coverage Open%, uncovering from a defender on 35 of his 68 matchups (51.47).

However, a burn yards per route rate of 2.5 – just above the average of 2.3 – and his struggles in the burn yards per target metric (10.30) indicate that, while Claypool is separating from coverage, he’s not putting significant distance between himself and defenders. He will likely need to continue relying on his superiority at the catch point.

As with the Steelers, you won’t find too many people who draw a sense of excitement watching a Teddy Bridgewater-led Denver Broncos offense. There’s no doubting the talent on Denver’s attack. With Jerry Jeudy hurt and Noah Fant so far failing to take the second-year leap many expected, Courtland Sutton has shone brightest and is on course for a 1,000-yard season.

But save for Kendall Hinton (47.83 on 23 matchups), it’s the relatively unheralded Tim Patrick who has proven Denver’s best at separating, his Open% of 44.44 from 90 matchups level with Dallas Cowboys star Amari Cooper.

A below-average burn yards per route of 2.0 speaks to a paucity of substantial separation, but Patrick is using the distance he’s able to put between himself and defenders to create explosive plays, his big-play rate of 36.7% comfortably above the average of 29.2.

Again leading tight ends in receiving yards (747), most would expect Travis Kelce of the Chiefs to top the list at that position for Open%. Instead, it’s a former AFC West standout in ex-Charger Hunter Henry.

Scoring seven touchdowns in as many games prior to being kept out of the end zone in Thursday’s win over the Atlanta Falcons, Henry possesses an Open% of 48.15. However, he has not been double-teamed this season.

Darren Waller has a double-team percentage of 17.2 and has still managed to get open 46.75% of the time. The attention the Las Vegas Raiders star draws and his ability to succeed despite it illustrate his position as one of the league’s biggest matchup nightmares and arguably the gold standard at tight end.

NO ROOM TO MANEUVER

The Green Bay Packers’ offense has stuttered by its own high standards in recent weeks, with its underwhelming numbers not just a product of Jordan Love’s struggles against the Chiefs.

That mediocrity can, in part, be attributed to a lack of receiving depth beyond Adams. Marquez Valdes-Scantling is supposed to be the Packers’ deep threat who stretches the field with his ability to separate vertically.

Valdes-Scantling, however, is not fulfilling his role, as he’s only been open on five of his 38 coverage matchups – a percentage of 13.16. The Packers will likely need to be more explosive in the playoffs if they are to go all the way, meaning Valdes-Scantling must up his game.

Bryan Edwards is in a similar situation in Las Vegas. Scarcely utilised last season, Edwards has seen a bump in targets in 2021, with the Raiders often going to him downfield.

Edwards’ average depth of target is 17.2 yards, but he has found deep separation hard to come by, uncovering on 17 of his 111 matchups (15.32%). Yet with a gaudy burn yards per target average of 15.01 and a big-play rate of 50.7% that is third among receivers with a minimum of 10 targets, Edwards is a player who takes full advantage of the little separation he gets when Derek Carr looks his way.

Edwards’ former South Carolina teammate and San Francisco 49ers star Deebo Samuel is performing at the highest level of his young career. Samuel is second behind Kupp with 979 receiving yards and already has seven total touchdowns this season.

However, Samuel ranks near the bottom of the league in Open% (15.07), with the difference between that number and his overall production a reflection of how he is used by San Francisco. His average depth of target is 8.6 yards – below the NFL average for receivers of 11.0. That speaks to the Niners’ reliance on him on screen plays and short passes that are an extension of the run game.

Third in burn yards per route and leading all wide receivers with an average of 9.6 yards after catch per reception, Samuel takes advantage of those short targets with his speed, elusiveness and power, while he can win at the catch point downfield even without separation.

The 49ers often get Samuel in space in the backfield, but for one of the league’s most unique players, separation is not always a requirement.