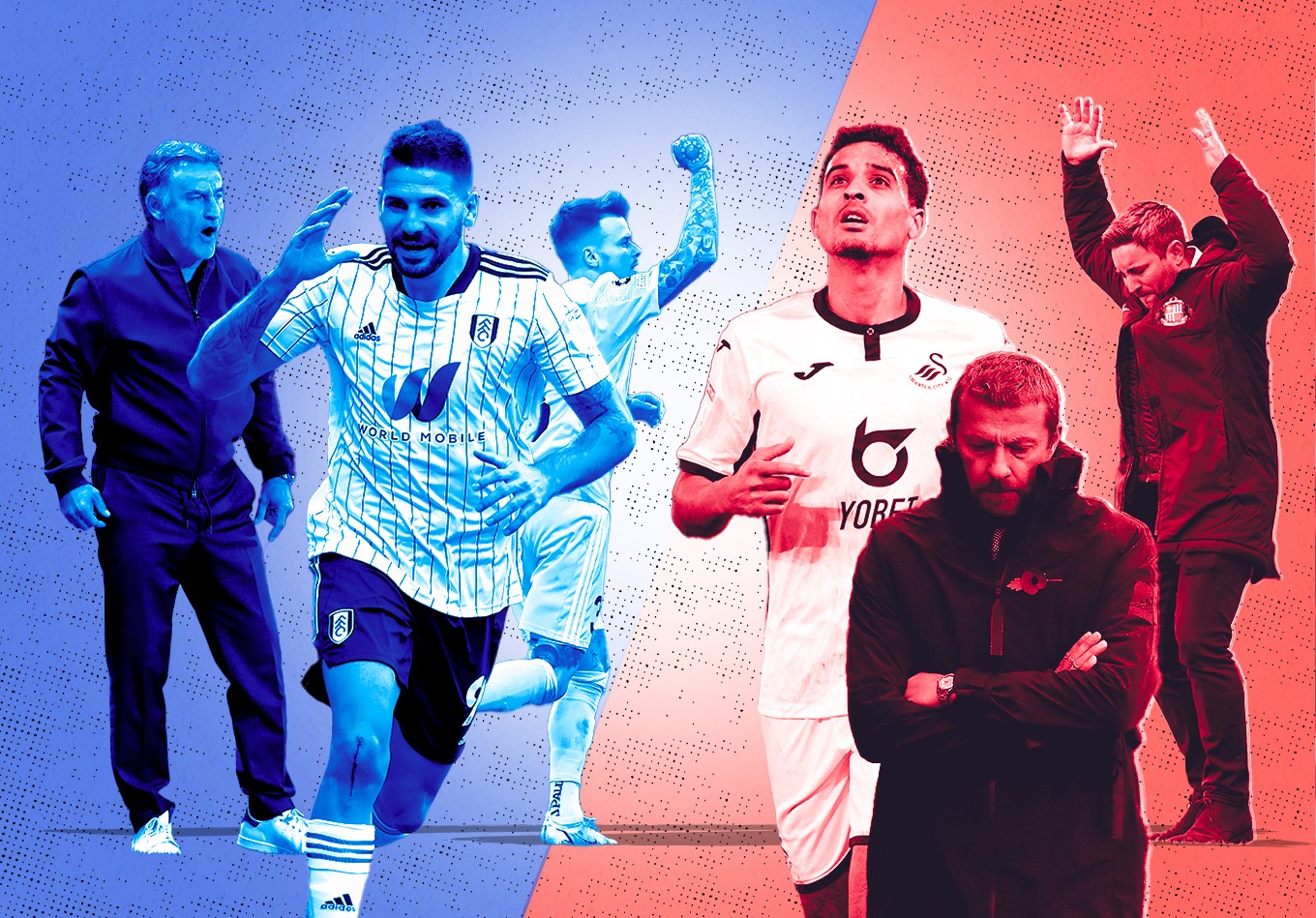 International breaks are a frustrating, yet natural pause in domestic football. But once again it gives us a perfect opportunity to look at what’s happened in Stats Perform’s Power Rankings since the season started.

We did the same exercise during October’s international break. Although you might justifiably think ‘well, surely not much could have changed in the space of a month’, we’d counter with the fact that since then, we’ve seen Daniel Farke, Dean Smith, Nuno Espírito Santo and Steve Bruce join Xisco on the coaching scrapheap. And that’s just in the Premier League. Xavi has replaced Ronald Koeman at Barcelona. Mark van Bommel has left Wolfsburg. The managerial merry-go-round is merciless, and it waits for no one. Much like our Power Rankings.

A quick reminder on how this thing works. Here at The Analyst, we are lucky enough to have access to Stats Perform’s Power Rankings, which rate a frankly enormous number of teams (19,008 across 391 domestic leagues) across the globe based on a system that scores the current strongest side 100 and the weakest zero. The ratings evolve each day based on the results of both an individual club and those of other teams within its own domestic league. Domestic and European fixtures are taken into account, as well as the strength of each league.

While domestic league tables have established a monopoly on the whole ‘ranking clubs in order’ thing, their one big drawback is that they struggle to compare between leagues. Comparing a club’s Power Ranking on Matchday 1 to now can give us deeper insight into who’s started the season well, and who has not, comparatively speaking.

The big story here is clearly Ajax. The Dutch side started the season in 20th spot in our Power Rankings, but an impressive first third of the campaign has seen them leap 11 places into our top 10. Domestically, they are quite clearly the best side in their division, boasting an expected goals difference of 2.3 per game. PSV are the next highest with 1.4.

However, for all their clear superiority, Erik ten Hag’s side are somehow only joint-top despite scoring 37 goals and conceding only two (!) goals in 12 games.

But it’s in Europe where Ajax have really excelled, and the reason they’ve raced up the Power Rankings. They sit top of Group C in the Champions League with a perfect record so far, including back-to-back thrashings of Borussia Dortmund. In doing so, Ajax have become the first Dutch side to win their first four matches in a single Champions League campaign. Only Bayern and Manchester City have scored more goals than Ajax’s 14, while only Chelsea (one) have conceded fewer. They look poised to go deep in the competition again, just two seasons after their squad was raided in 2018-19.

Another side who have cruised to a 100% record in Europe are Liverpool. The Reds have moved up four ranking places into second, leapfrogging domestic rivals Manchester City in the process. Beating sides with the calibre of their European opposition – Milan (joint-top in Serie A), Atletico Madrid (fourth in La Liga) and Porto (top in Portugal) – has done their rank no harm at all.

Arsenal’s October Power Ranking was unchanged from Matchday 1, but four wins from four in all competitions since late October has seen Mikel Arteta’s side climb three places into 11th. And yes, that is ahead of Barcelona. Something to smile about at last Gunners fans.

Arsenal head into Saturday’s Premier League fixture with Liverpool as the in-form Premier League team. The Gunners have the longest ongoing unbeaten run in the league (eight), while Arteta’s new signings have really hit the ground running. Since the end of the summer transfer window, no Premier League team has won more points (20).

West Ham’s ascent under David Moyes goes on, as they rise to number 13 in our rankings. For context, of Premier League sides, only Liverpool, Manchester City, Chelsea, Manchester United and Arsenal are higher. They are a settled squad – making just four changes to their starting XI in the league this season, fewer than any other side – who are currently enjoying a four-game winning streak. They’ve not won five top-flight games in a row since February 2006 under Alan Pardew. Last week, we broke down how their simple, old-school tactical strategy has got neutrals swooning.

Barcelona’s fall from grace continues unabated, and they’ve now dropped out of our top 10.  The Catalans are languishing in ninth in La Liga, and their tally of 17 points from their first 12 games is their second-lowest haul at this point in a season in the 21st century (16 points in 2002-03). After years of feeling inevitable, Xavi is finally Barcelona manager. He’ll need to do a whole lot more than sign a 38-year-old Dani Alves.

In Italy, the runaway leaders Napoli and AC Milan have also unsurprisingly risen up the rankings. The two sides are seven points clear at the top of Serie A, but a look under the hood suggests both teams have been running slightly hot. Napoli have conceded just four goals from 8.9 xG against. To be fair, that 8.9 figure is comfortably the best in the league, but the 4.9 goal overperformance is also the highest in Serie A. At the other end of the pitch, Milan have scored 26 goals from 19.0 xG, producing a differential in front of goal of plus seven. Only two sides have a wider margin. We’re not saying it definitely won’t continue, but it’s likely that both sides see a slight regression from such extremes.

It’s Nice who are the biggest risers in our Power Rankings since the start of the season.  Their fast start to Ligue 1 has seen them rise 98 places, and they now sit comfortably within our top 100. It’s hard to look past the impact of reigning Ligue 1 manager of the year Christophe Galtier, who joined Nice fresh off the back of a title-winning campaign with Lille. Striker Amine Gouiri has been arguably Galtier’s most important player this term. His total of 0.97 xG plus xA combined per 90 is the highest in the entire league (min. 1,000 minutes).

Fulham, a clear applicant for a league in between the Championship and the Premier League, continue to carve up England’s second tier. The Cottagers have scored 44 league goals so far this season, 10 more than any other team in the English football league. Aleksandar Mitrovic has 20 of those goals alone, meaning he’s single-handedly scored more than 43 of the 92 teams in the country.

Patrick Vieira has already made a notable impact at Crystal Palace, imparting his tactics and style of play in remarkably quick time. The Eagles have already recorded impressive results (a 2-0 victory at Manchester City and a 2-2 draw at Arsenal) and, pleasingly for Vieira, their results are starting to mirror their performances.

While the biggest fallers section (below) paints a damning picture of Spanish football, the biggest risers does the opposite for teams playing in France. Five of the top 10 risers ply their trade in Ligue 1. Farmers league no more?

The prevalence of teams from Spain in this list paints a worrying image.  Seven of the top 10 biggest fallers are Spanish clubs, with all bar one of them playing in La Liga.

Remember that the Power Rankings take into account the relative strength of the leagues, as well as the individual clubs. In a division that has just witnessed the loss of one of the greatest players to play the game, and Barca’s struggles in Europe and domestically, there’s a real sense that the gravitas of La Liga is on the downturn.

Norwich’s yo-yoing looks set to continue as they remain the most prominent symbol of the widening gap between English football’s top two tiers in recent years.

You suspect with the financial shot-in-the-arm that Newcastle just received that their position of 72nd on the list won’t remain for long. But it serves as a reminder of the difficult current situation that Eddie Howe has inherited.

The above analysis only included the top 100 in Stats Perform’s Power Rankings, but there are some great (and not-so-great) stories outside of that list.

Sheriff Tiraspol’s heroics in Europe – they’ll never forget that memorable night in Madrid – have catapulted them up 179 places to spot 180.

Newly-promoted Estoril are showing no signs of being overawed by their place in Portugal’s top flight. Playing in the Primeira Liga for the first time since 2017-18, they currently sit fourth. That strong form has seen them rise 161 places to 211.

Elsewhere, League One’s Rotherham are big movers, up 114 places to 191. For context, that’s nestled in between Qarabağ of Azerbaijan and Bulgarian outfit Ludogorets. Both those sides played European football this season. Millers ultras will be either be laughing or fuming at the sheer depth of the English footballing pyramid, where fifth-tier sides can get five-figure attendance figures.

Unlike Estoril, Greuther Fürth are not enjoying life in the Bundesliga. They are setting all sorts of unwanted records. Fürth are the first team in Bundesliga history to only have one point after 11 matches in a season, while coach Stefan Leitl has officially made the worst managerial start in the competition since 1965-66. There’s more, but for the sake of our avid Fürth audience, we’ll stop there.

Two promotion heartaches in three seasons for Sunderland proves just how hard it is to ‘get out’ of the tiers below the Premier League. A promising start to League One – the Black Cats were second in mid-October with two games in hand – has been dampened by a poor run of three defeats on the trot. They fall 63 places to 221.