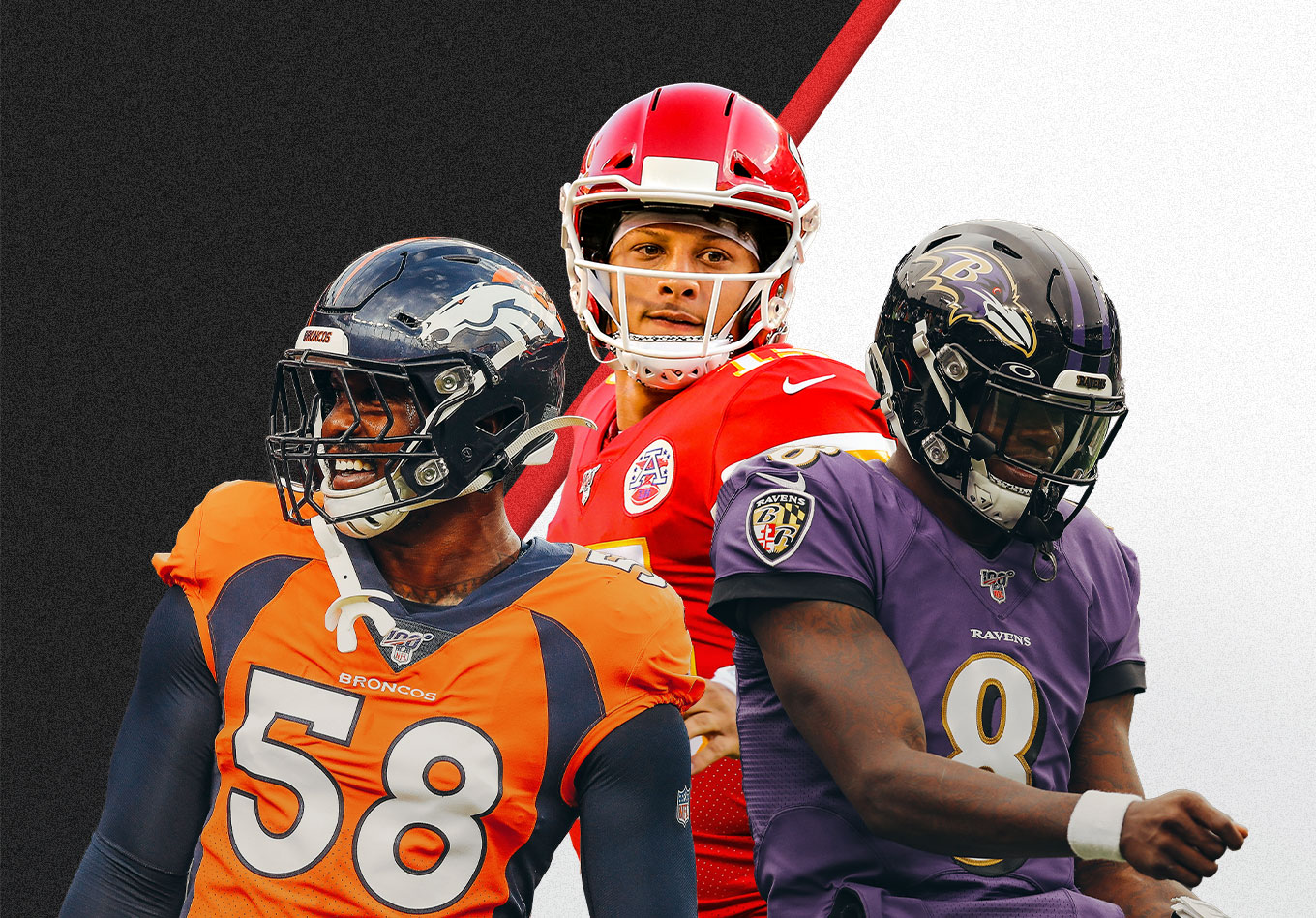 AFC Win Projections: Why the Broncos Could Be This Year’s Surprise Team

It happens every year.

Whether it’s because it catches banged-up opponents at the right time, has a key player who emerges as a star playmaker or takes advantage of an easy schedule following a last-place finish the year before, there’s seemingly always one NFL team that catches everyone off guard.

In the AFC last season, it was the Miami Dolphins, who finished 10-6 but missed the playoffs. Two years ago, it was the Buffalo Bills, who went from 10 losses to 10 wins behind the emergence of quarterback Josh Allen. In 2021, that team very well could be Bradley Chubb, Von Miller and the Denver Broncos, according to our NFL win projection model.

After that, a win percentage is created for each game based on aggregated team ratings and those eight weighted team components. Remember that because of the way the NFL puts together its schedule, it’s hard for both AFC and NFC teams that finish first in their division to pile up wins again the following year.

This is in some ways the opposite of what we mentioned earlier about why there’s always at least one surprise team in each conference. These projected win totals are the average wins that come as a result of our season simulations. (Obviously, we know that finishing with 10.6 wins is impossible.)

First, let’s start with those Broncos and the AFC West, which we rate as the best division in football. Note: The strength of schedule ranking is across the entire NFL.

The roster construction for this team is so good that it starts the season projected to win the best division in football in spite of having three glaring question marks on the offensive line. Center Creed Humphrey, right guard Trey Smith, and right tackle Lucas Niang will all be making their NFL debuts in Week 1. If those players are even just average, the Chiefs’ season outlook will look even better. The quarterback and pass-catchers are absurdly good, and the defense does not look like it’s gotten any worse. They could use a bit more pass rush from the edge, but this is still one of the best teams in the NFL. That being said, if the offensive line falters, the Chiefs could be looking at a wild-card spot rather than a division win.

From last in the division to the playoffs, our model makes us big believers in the 2021 Broncos. Teddy Bridgewater is an excellent quarterback for this team. He’s limited, but also takes what’s available. With a bevy of offensive weapons to play with and an offensive line that has improved rapidly since the Broncos hired Mike Munchak, he’ll have plenty available. The defense, though, is what will make the Broncos a playoff team. Their pass defense was good last year, but they made improvements across the board. Oh, and they also get Von Miller back.

The big question mark for the offense is up front. After moving on from Gabe Jackson, Trent Brown and Rodney Hudson, it will be a different-looking group in the trenches. If they perform well, this offense has all the pieces to be great. The defense has a chance to be good as well. Casey Hayward isn’t what he was a couple of years ago, but a lot of his burns last year came because he was on an island without any help. Even the best corners get burned when they’re on their own. We like his fit in this defense. The defensive line needs someone to step up and be a true disruptor.

A brutal schedule dampens the Chargers’ prospects in 2021. The offense has improved through a rebuilding of the offensive line and the pass-catching group remains strong. The defense has a lot of question marks, and first-year head coach Brandon Staley will have his hands full creating a game plan around Joey Bosa and Derwin James. Outside of Bosa, the rest of the defensive line leaves a lot to be desired. In the secondary, the Chargers need Asante Samuel, Jr. to be good. This could be a great defense, but with so many eggs placed in the baskets of two players with injury histories, it could also go downhill quickly.

This is our third-ranked division in the AFC and sixth overall. Following a 13-win season, we do expect the Bills to regress a bit, in spite of having the easiest schedule in the NFL, per our projections. Additions to the defensive line like Gregory Rousseau, Boogie Basham and Efe Obada will be the biggest key to their defense. The Bills have one of the best pass defenses in the NFL, but struggle to create pressure up front.

The offense should be much improved in 2021. The Pats have one of the top offensive lines and should continue to be able to run the ball efficiently and protect new QB Mac Jones. Jakobi Meyers is one to watch this year. His win rate (the rate at which he beat his defender) exceeded 55.0%, one of the highest marks in the league last year. The defense is still loaded, even without Stephon Gilmore to start the year, and their defensive front is going to be a nightmare for offensive coordinators.

A marked improvement over 2020’s two-win campaign. The Jets continued to add to the offensive line with Alijah Vera-Tucker in the draft and Morgan Moses through free agency. They also brought in weapons for new QB Zach Wilson in Corey Davis and Keelan Cole. Losing Carl Lawson was a huge blow to the defense, but the interior pass rush should be among the best in the league. Their safeties are great, but the corners are question marks and will test Robert Saleh’s defensive mind early.

Massive concerns on the offensive line and the toughest schedule in the division have the Dolphins projected to finish last after winning 10 games last season. Left tackle Austin Jackson was poor last year, and the team didn’t make improving the line a focus in the offseason. Their pass-catchers project to be much better with the additions of Will Fuller and Jaylen Waddle, but will Tua have enough time to get the ball to them? On defense, their pass coverage is excellent, but their pressure rate is projected to be in the bottom third of the league. First-rounder Jaelen Phillips could be a difference-maker for the defense if he can generate some pressure.

The Ravens have the NFL’s highest projected win total and point differential while playing in the second-ranked division in the AFC and fourth overall. The loss of J.K. Dobbins hurts, but they should remain the best running team in the NFL. The additions of veterans Kevin Zeitler and Alejandro Villanueva on the offensive line should only help the run game. Villanueva has lost a step in pass protection, but he’ll have an easier time in the Ravens offense than the Pittsburgh Steelers offense. Additions at receiver should give Lamar Jackson more ball-winners down the field and allow Hollywood Brown to return to his more natural position in the slot. The defense is spectacular, and the biggest X-factor may be second-year linebacker Patrick Queen. Queen struggled in both coverage and as a tackler in 2020, but a big step forward in his development could make this defense the best in the league.

The Browns are projected for another playoff appearance and have the only rush offense that could challenge the Ravens this year in terms of efficiency. The offensive line is stellar, and only 72.o% of tackle attempts were successful against Nick Chubb last year. The presence of Kareem Hunt will almost certainly prevent Chubb from leading the league in rushing, but per our metrics, he’s the best ball carrier in the NFL. On the passing side, they get Odell Beckham Jr. back and added speedster Anthony Schwartz in the draft. Defensively, their front seven is loaded with disruptors. Jadeveon Clowney is an excellent second pass rusher and the pressures he can generate through twists and stunts should open up even more holes for Myles Garrett. The Browns are projected for our second-highest pressure rate in the NFL. The secondary still has questions, coming in at 21st in the league per our projections.

A brutal strength of schedule and an almost entirely new offensive line leads to a poor projection for the Steelers. Under Mike Munchak, the Steelers line was consistently one of the best in football. But through the departure of Munchak and the retirement of interior o-line staples David DeCastro, Ramon Foster and Maurkice Pouncey, the line has a much different outlook in 2021. Maybe the addition of Najee Harris will ease some of the burden placed on the line, but we’re not sure he’ll have many holes to run through. Like the Browns, their defensive front is excellent. T.J. Watt was one of the most productive pass rushers in the NFL last season and Cam Heyward and Stephon Tuitt are a stout duo on the interior. Safety Minkah Fitzpatrick is an anchor in the deep middle, but the corners could be heavily exploited.

Joe Burrow is back, but the offensive line hasn’t been fixed. Keeping their up-and-coming quarterback upright will once again be a challenge for this offense in 2021. Defensively, the Bengals have added a few pieces, but they lack any real game-changers. With a projected below-average rush defense, pass rush and pass defense our model expects them to give up the most points in the NFL.

In the fourth-ranked division in the AFC and eighth overall, the Titans’ projected win total is largely derived from playing in a weak division. The Titans could have a great offense and an equally bad defense in 2021. They don’t project to generate much pressure, but their interior defensive line should be fun to watch. Jeffrey Simmons and Denico Autry could wreck an opponent’s run game, but without quality players in the secondary, opposing offenses may elect to throw the ball around anyway.

Trevor Lawrence walks into a great situation with a weak division, weak strength of schedule and an offensive line that’s functional enough to keep him standing upright. His offensive weapons are flashy, but they’ve lacked consistency in the past. Lawrence could be the generational talent who can unlock some of what D.J. Chark and Laviska Chenault Jr. are capable of, but those two receivers could also just be what they are. Every level is littered with question marks defensively. Tennessee could be exposed in all facets, but its games should be high scoring and entertaining.

This projection is largely due to the severe downgrade the Colts have experienced at quarterback. Carson Wentz was abysmal in 2020. In our yards over expected in expected passing situations metric (a quarterback’s yards added when the game situation dictates pass), Wentz was sandwiched between Nick Foles and Joe Flacco in 2020 and was only as good as Jared Goff in 2019. He doesn’t get the same offensive line upgrade as Phillip Rivers got in 2020 as he’s coming from Philadelphia, which already has a great line. The defense, on the other hand, will keep the Colts in the game. If Kwity Paye plays as he did in the preseason, he’ll give the Colts the edge rush they’ve been lacking and could propel them into one of the best defenses in the league.

Few things are good with this team. They have a patchwork roster filled with players cast aside and their star quarterback is unlikely to play another snap for the team. There really isn’t much to discuss with this team.