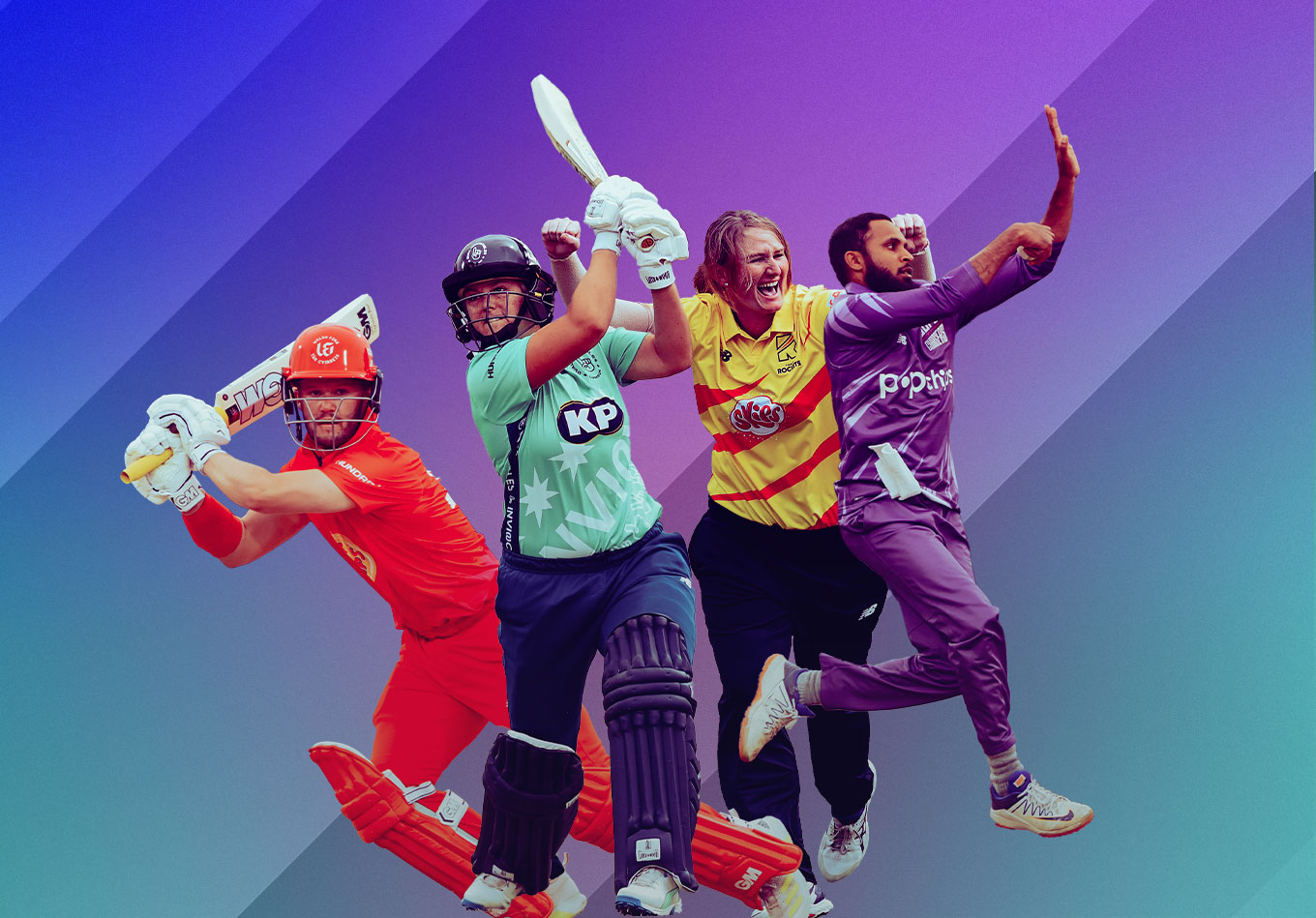 Over the course of the past month, The Hundred has seen over 15,000 runs scored across both the men’s and women’s competition. 398 sixes have cleared the boundary ropes, 56 half-centuries have been posted and a hat-trick, courtesy of the tournament’s elder statesman Imran Tahir, have all kept fans of the sport, young and old, royally entertained during summer afternoons and evenings.

The 100-ball format has also given coaches and captains plenty to think about tactically, with a shorter powerplay, fewer end changes and the option of a bowler delivering ten deliveries in succession all creating new dilemmas to solve, as teams try to work out optimal strategies to win games.

Prior to the start of the competition, we only had data from The Hundred’s nearest relation, T20, for clues into how teams would approach each match. So as attention turns towards Friday’s eliminator matches, followed by two Lord’s finals, what can the events of this year’s group stages tell us about the tactics that have proved successful in cricket’s newest format?

We have drilled into the numbers to find out.

One of the accepted wisdoms in the eyes of most Hundred captains has been that if you win the toss, you bowl first. From the 61 matches where a toss has taken place, the captain who has lost has seen their side put into bat on 43 occasions.

The teams who progressed straight to Saturday’s finals, Birmingham Phoenix’s men and Southern Brave’s women, excelled particularly when it came to completing run chases. Both enjoyed 100% records when batting second.

In the men’s competition, Birmingham’s success in chases has been built on the strength of their top order. Across their four victories, the batters occupying the top four positions in the order have contributed 80% of their runs.

As highlighted by the table below, their four leading run scorers in these positions have occupied different roles, with captain Moeen Ali being the anchor withopener Finn Allen, who we profiled before the tournament began, Will Smeed and the tournament’s leading run scorer, Liam Livingstone, all looking to score quickly, both in terms of hitting boundaries and pinching singles. Their dot ball percentages are also well below the men’s competition average (33.1%) as they look to stop opposition bowlers from building pressure through dots.

One of the recurring questions in the lead-up to The Hundred was whether local fans would pledge their allegiance to the new city-based teams. The partisan atmosphere at many matches has seen any lingering doubts of fans supporting their favourite team dispelled – and this support has also coincided with the home side, particularly in the men’s competition, enjoying great success at their adopted venues.

In total, three men’s teams enjoyed 100% home records in the competition: Birmingham Phoenix, Oval Invincibles and Southern Brave; whilst the Brave’s women also won all their games on home soil on their way to topping their group. Fortress Southampton.

This indicates that the tournament’s venues have created a playing environment that enables the strengths of their respective men’s teams to flourish.

This was particularly evident at Old Trafford, where Manchester Original’s spin trio of Matt Parkinson, Tom Hartley and Calvin Harrison took nearly 70% of their side’s wickets at home, with the slow turning pitches resulting in teams batting first posting an average score of 114.5 when an innings was completed, the lowest of any venue in the competition.

Another example of venue conditions suiting the home team was the lack of impact of spin bowlers at Edgbaston, with the home team, Birmingham Phoenix, possessing two players in Moeen Ali and Finn Allen who have historically enjoyed high strike rates against spin in T20 cricket.

As we will come onto shortly, spin has played a major role in both competitions in terms of stemming the flow of runs.  However, those numbers in the men’s competition are turned completely on their head when we focus solely on Edgbaston.

In the remaining four Hundred matches, only Oval Invincibles will have the benefit of home advantage, with the women facing Birmingham Phoenix in the eliminator on Friday night. For Birmingham’s men, it is also worth noting that the venue for the final, Lord’s, has bucked the tournament trend when it comes to winning batting second. Every game in the men’s competition so far at The Home of Cricket has been won by the team who has set a score for the opposition to chase, which may influence the decision-making at the toss.

When the Hundred’s rules were first announced, one key area of differentiation from T20 was the competition’s powerplay. In T20 cricket, the opening 36 balls, or 30% of an entire innings, are subject to fielding restrictions where only two players are allowed outside of the field’s 30-yard inner circle. In the Hundred, there are only 25 balls of the same restrictions, or 25% of an innings.

So, taking this into account, would teams look to adopt a more high-risk strategy at the top of the innings? Or would they value wickets with a view to accelerating later on?

In the women’s competition, the two qualifiers for Friday’s eliminator clash reached the knockout stages with very different approaches to the beginning of the innings. Oval Invincibles batted second in all but one of their group games and thanks to the efforts of their bowling attack, led by Tash Farrant, they had an average run chase in the competition of 118, well below the tournament average of 127. As a result, they adopted a low-risk approach to ensure they had wickets in hand at the death. This meant they averaged just 27.3 powerplay runs, with 53% of the deliveries faced resulting in dot balls. This cautious approach meant they only lost 1.3 wickets per innings.

This approach yielded mixed results, with the side being successful in three of their six chases.

The Invincibles’ eliminator opponents, Birmingham, batted first in five of their matches and this resulted in a more aggressive approach early on, averaging five more powerplay runs per innings. However, what set Birmingham and Southern Brave apart from the rest of the competition was their ability to increase the run rate in the middle period of the innings. Birmingham’s strike rate increased from 130.8 in the powerplay to 136.3 for the duration of the next 50 balls, whilst the Brave’s acceleration was even more pronounced, going from 124.4 to 137.2.

This acceleration was not matched by any other team, only Northern Superchargers (130.2) had a rate above 125, which will make the bowling in the middle part of the innings a key passage of play at The Oval on Friday.

Ironically, the Invincibles’ approach in the men’s competition was in complete contrast to the women’s team. Tom Moody’s side averaged 40 powerplay runs per innings during the competition, the highest of any team, and scored a boundary one in every four powerplay deliveries. However, they also lost 2.3 wickets in the first 25 balls of an innings, significantly more than any other team, reinforcing the high-risk, high-reward element of an aggressive approach early on.

Across both competitions, spin bowling has played a key role with 46% of balls in the men’s competition being delivered by spinners and 53% in the women’s.

Given that ratio, it will probably come as no surprise to see over half the wickets also fell to spinners in the women’s competition, but what is perhaps more interesting is that left-arm finger spinners are enjoying a productive tournament so far. Delivering the ball from a different angle to their right-handed counterparts, orthodox left-armers have conceded the fewest runs per ball, have the highest dot ball percentage and the best wicket-taking strike rate of all spinners in the competition.

Of all the left-arm spinners in the competition, Birmingham’s Kirstie Gordon is a major stand out. As well as taking 13 wickets at 14.6 runs apiece, she also forced a false shot out of an opposition batter once every three balls. Linsey Smith’s performances for Northern Superchargers were also noteworthy, conceding less than a run a ball (122 runs from 132 balls bowled), in addition to nine dismissals.

In the men’s competition, it will come as no surprise to see leg spin having a major impact given that leggies Adil Rashid and Rashid Khan finished the group stage as the joint highest wicket takers, with 12 victims each.

In total 65 wickets fell to leg spin during the competition, but what is perhaps more surprising is the control offered by leg spinners, considering the difficulty of mastering their art. In fact, leg spinners conceded the same number of balls per boundary (6.6) as off spinners, with an almost identical number of runs per scoring shot (1.96), both well below the competition average, whilst taking far more wickets.

These numbers appear to bust the long-standing myth that a wrist spinner is likely to offer up a higher proportion of bad balls to hit than the finger spinner, but may also indicate that fans of the Hundred have had the good fortune of watching some of the world’s best leg spinners operating at the top of their game.

Rashid Khan still has a big role to play in trying to help Trent Rockets reach Saturday’s final when he comes up against Southern Brave’s batters on Friday. But no matter who proceeds to Lord’s, it is clear that whoever comes out on top in the match-ups between Birmingham’s destructive top four and their opposition’s spinners will be pivotal in who ends up being crowned The Hundred’s inaugural champions.