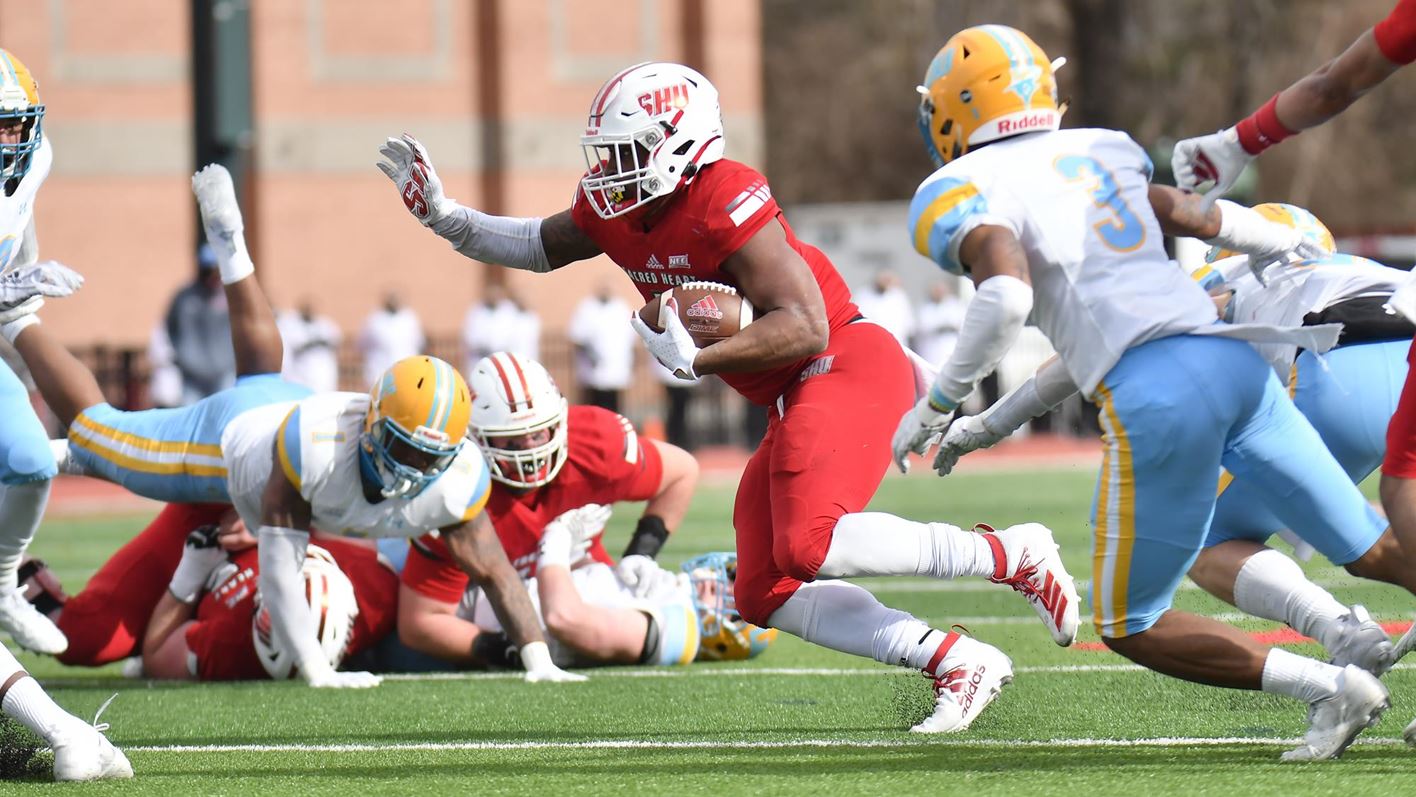 The final Stats Perform FCS Top 25 in the last three seasons reflect a lot about the upcoming Northeast Conference season.

Duquesne’s first-round win at Towson in the 2018 FCS playoffs moved it into the final poll. Central Connecticut State was in the national rankings for the final eight weeks of the 2019 season. Sacred Heart troubled Delaware enough in the 2020-21 playoffs this past spring that it moved into the final rankings.

This fall, those three programs have veteran teams that appear to stand above the competition heading into the NEC’s 26th season. Sacred Heart won the spring title by defeating Duquesne in a first-ever NEC championship game, while 2019 champ CCSU sat out the season along with Saint Francis due to the pandemic.

The NEC is back to having a full conference schedule and the regular season will again decide the league’s automatic bid to the playoffs.

Here’s a preview of the upcoming NEC season:

3. Duquesne (4-1, 4-0) – The Dukes know winning as well, having finished first in the regular season six times under coach Jerry Schmitt since 2010. Transfers transformed their offense in the spring, including NEC passing leader Joe Mischler and the team’s leading rusher (Garrett Owens) and pass catcher (Cyrus Holder). Yet to figure out how to answer Chestnut, the Dukes defense allowed an NEC-low 194.6 rushing yards per game.

4. Bryant (2-2, 2-2) – The offense didn’t have any player reach 100 receiving yards in four spring games, but Daniel Adeboboye averaged 111.3 rushing yards per outing. Linebacker Joe Andreessen had 25 tackles and 7.5 tackles for loss in only two games, and the defense surrendered only 231 yards per game and 14.5 points per game – both conference lows. A Sept. 18 matchup at Akron will be the program’s first against an FBS opponent.

5. Saint Francis (2019: 6-6, 3-4) – Sitting out the 2020-21 season cost the Red Flash of having the most returning starters in the NEC, and standout quarterback Jason Brown and wide receiver Ra’Shaun Henry have made grad transfers. A much-younger lineup with face Eastern Michigan in the program’s first FBS game on Sept. 3, but coach Chris Villarrial should have a solid defense, led by 6-foot-2, 285-pound D-tackle James Watkins.

7. Wagner (0-2, 0-2) – The defense was on the field too often in coach Tom Masella’s shortened first season, but it allowed linebacker Titus Leo to put together a resume for NEC defensive player of the year. In their last full season in 2019, the Seahawks ranked last in the FCS in rushing yards per game (59.2). They have 10 quarterbacks in preseason camp.

Merrimack (0-3, 0-3) – Although a part of the NEC standings, the third-year transitioning D-I program won’t be title-eligible until 2023. The Warriors feature a pair of lockdown cornerbacks in Caleb Holden (eight interceptions and 34 pass breakups in his career) and Darion McKenzie (four and 16). The latter joined Chestnut as the only two NEC players on the Reese’s Senior Bowl preseason watch list.

Sacred Heart running back Julius Chestnut – The 6-1, 215-pound consensus All-American has nine straight outings over 100 rushing yards, and the run stretches out to 17 of his last 21 games. He leads all active FCS players in rushing yards (3,063) and rushing yards per game (109.4), and is tied for third with 32 touchdowns.

Central Connecticut State linebacker Tre Jones – A former safety who’s grown to 6-3, 255 pounds, Jones is a strong pass rusher (14 career sacks) who can still drop back into pass coverage and be physical against receivers. He had an interception in CCSU’s 2019 FCS playoff loss at Albany.

Central Connecticut State linebacker Foday Jalloh – Looking beyond the all-everything Chestnut, the 6-2, 220-pound Jalloh has the speed for the next level. The outside ‘backer, a junior athletically, posted a well-rounded stat line two years ago, including team highs in total tackles (81) and solo tackles (43).

In the last 10 seasons, the NEC is the only FCS conference to have five different players rank first (Chestnut in 2020, Saint Francis’ Khairi Dickson and Bryant’s Jordan Brown) or second (Wagner’s Ryan Fulse and Saint Francis’ Kyle Harbridge) in the nation in rushing yards per game. The Missouri Valley Football Conference also has five such occurrences between four different players.

With all the terrific rushing attacks, the NEC won’t be confused with high-octane passing, with its 156.7 passing yards per game in the spring the second-fewest among FCS conferences to MEAC teams. The ability to move the ball through the air consistently will separate teams.

Central Connecticut State at Sacred Heart (Oct. 16) – Forgive CCSU defenders if they get a bit dizzy. Four weeks after hosting Southeastern Louisiana quarterback Cole Kelley, who received the 2020-21 Walter Payton Award, the Blue Devils have to try to slow Chestnut, who finished third in the voting. Watch the FCS National Awards.

Saint Francis at Duquesne (Oct. 30) – It sounds a bit eerie that the annual Keystone State Clash will go down on Halloween Eve at Rooney Field on The Bluff.

Central Connecticut State at Duquesne (Nov. 13) – If the NEC title is undecided entering this game, it probably won’t be afterward.