NFL Positional Rankings: The Best, Worst, and Most Improved Teams on the Offensive Line | The Analyst 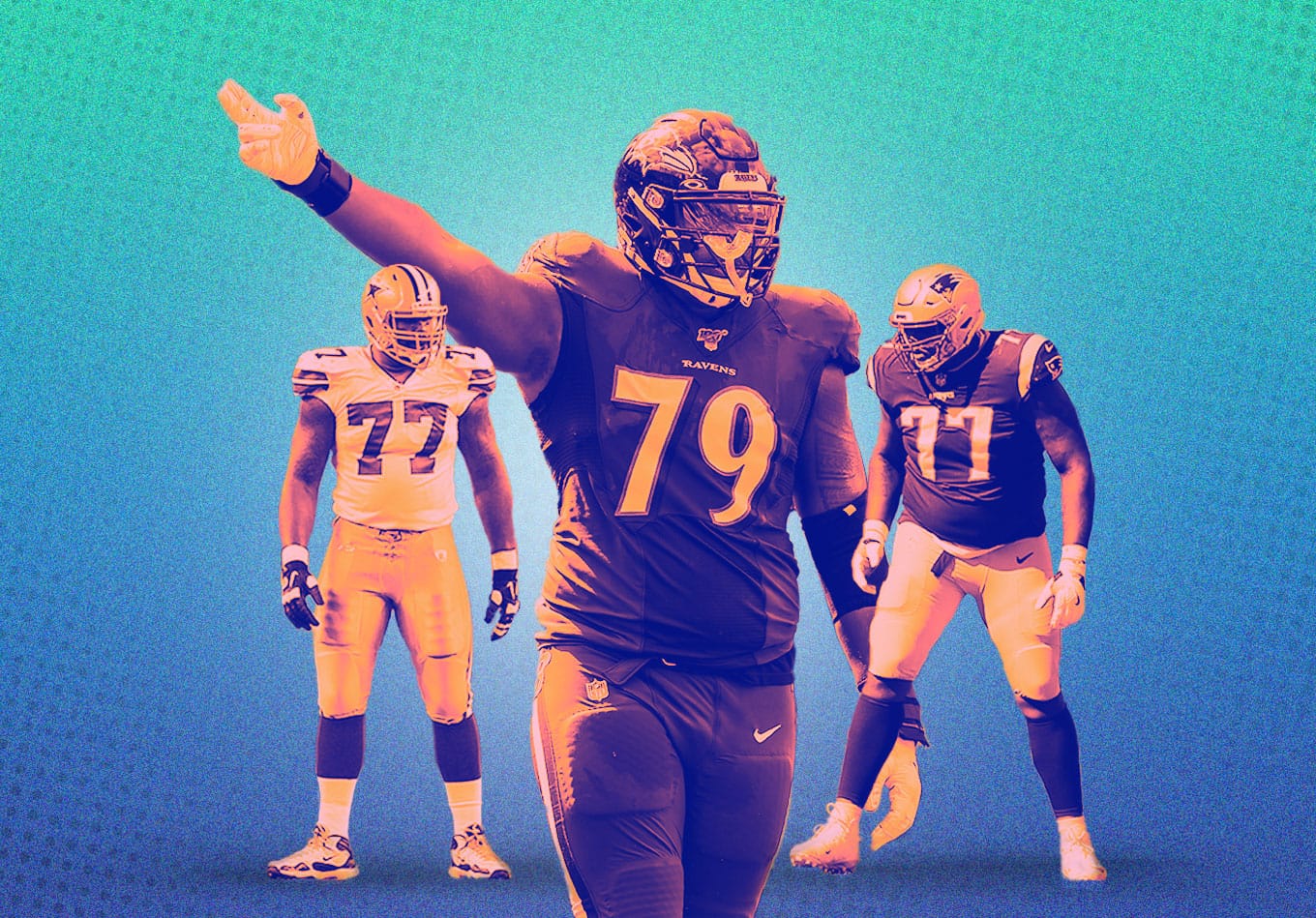 NFL Positional Rankings: The Best, Worst, and Most Improved Teams on the Offensive Line

With offseason programs in the books, NFL teams will next month turn their attention to training camp as preparations for the 2021 season ramp up.

Every coaching staff in the league knows that having a reliable offensive line will be crucial to their hopes of success in the coming campaign. Too many holes in the trenches can doom a team’s chances in a hurry regardless of the talent at quarterback and the offensive skill positions.

Reflecting the importance of strong play up front, five offensive linemen were taken in the first round of the 2021 NFL draft.

And, using combined run blocking and pass protection data over the past three seasons, we’ve produced projected offensive line rankings to see how each team stacks up in the trenches. The individual ratings indicate what percentage better or worse a lineman is projected to perform compared to the league average OL in 2021.

Here’s a look at which teams are in the best shape up front, which O-lines could cause problems for their quarterback and which appear to ready to make the leap to the league’s best.

Injuries decimated the Dallas Cowboys O-line in 2020, but when healthy it’s tough to see another unit in the league that can match this group for overall talent.

That may be a substantial caveat, but should the Cowboys keep their starters in the lineup in 2021, Dak Prescott will have the benefit of excellent protection from several spots up front.

Tyron Smith missed all but two games last season but remains the top pass protecting left tackle in our projected ranks. Zack Martin is second in pass protection among right guards and if he can return to his best after missing six games in 2020 and right tackle La’el Collins can stay on the field and play at a high level, a stacked Cowboys offense will be in an excellent spot to produce at a historic pace as they did last year before Prescott went down.

Despite losing Joe Thuney – one of the most dependable guards in football – in free agency, the New England Patriots head into the upcoming season with an elite group hoping to help the offense bounce back from a dismal 2020.

Trent Brown’s return should fortify the right side of the line, while left tackle Isaiah Wynn shouldn’t have to worry much about his inside shoulder with Mike Onwenu ranking as the second-best pass protecting left guard in the NFL after an excellent rookie season.

David Andrews grades out as the top run-blocking center in football after allowing a run disruption on only 5.3% of his snaps in 2020. Corey Linsley was second in run disruption rate at 6.2, while Shaq Mason is in the top three in that area at right guard.

Regardless of whether it’s Cam Newton or Mac Jones under center in 2021, the O-line is constructed in a way where the quarterback and a replenished set of skill-position players should have every chance to succeed.

The Baltimore Ravens’ presence in the top three may raise a few eyebrows given the team traded right tackle Orlando Brown Jr. to the Kansas City Chiefs. However, the Ravens’ lofty position is largely a testament to the play of Ronnie Stanley, who will be looking to bounce back after his 2020 season ended early due to an ankle injury.

Stanley is tied for fourth among left tackles in the projected offensive line ratings and was stellar in pass protection prior to getting hurt. His pressure rate-allowed of 4.4% was bettered only by David Bakhtiari and Andrew Whitworth at his position.

After giving up a pressure rate of 11.9% at left tackle for the Pittsburgh Steelers last season, Alejandro Villanueva will try to replace Brown, who allowed pressures on just 5.8% of his right tackle snaps in 2020.

But the interior was the main issue for the Ravens last season and with fourth-ranked right guard Kevin Zeitler arriving from the New York Giants, Baltimore should be confident of a noticeable improvement in the middle of its line.

The Carolina Panthers look set at right tackle with Taylor Moton ranking as the fifth-best player at the position, but the team has little in the way of solutions elsewhere up front.

The left side looms as a massive issue for the Panthers. Greg Little grades out as the worst left tackle in football and Dennis Daley is 30th among left guards in the projected rankings.

It is far from an ideal scenario for Sam Darnold to step into as quarterback, and he will hope center Matt Paradis can do a significantly better job snapping the football. Paradis’ bad snap percentage of 3.49 was the fourth worst in the NFL in 2020.

Offensive line issues have long since plagued the Minnesota Vikings, who invested a premium pick in a new left tackle by selecting Christian Darrisaw of Virginia Tech in the first round.

Prior to the draft, Darrisaw named Trent Williams and Laremy Tunsil as his favorite linemen to watch. If he replicates their impact, he will be a success, but there are substantial problems on the interior.

Dru Samia is the worst left guard in the NFL in the projected rankings, and center Garrett Bradbury allowed pressure on 8.1% of his pass protection snaps last season. Only two players to take snaps at the position had worse pressure rates.

The Chiefs completely remodeled their offensive line in the wake of giving up 33 pressures in the Super Bowl LV, and there is little doubt they head into 2021 with a much-improved group as they attempt to win back the Lombardi Trophy.

Kansas City will need an improvement from Brown after acquiring him from Baltimore. In his 221 pass protection snaps at left tackle after Stanley’s injury, Brown gave up a pressure rate of 10.9%. Having campaigned to play on the left side, Brown’s performance figures to come under significant scrutiny.

He will be helped by the presence of Thuney, who was second among all left guards in the projected rankings after allowing pressure on just 4.3% of his snaps in his final season in New England.

With Laurent Duvernay-Tardif returning to man the right guard spot, the Chiefs’ line has an air of solidity about it. The Chiefs are 11th in the projected ranks, but they could jump into the top 10 or higher should their additions perform to their potential.

Many will be backing a Los Angeles Chargers surge towards the postseason after Justin Herbert took home the NFL’s Offensive Rookie of the Year honors in 2020. But much of Los Angeles’ playoff hopes will hinge on the performance of rookie left tackle Rashawn Slater.

That is a lot of expectation to place on a player who did not play in the 2020 college season, but the optimism should come from Slater’s 2019 performance in which he gave just six pressures in 220 pass protection snaps for Northwestern.

Yet the most important addition for Herbert may be center Corey Linsley, who arrived from the Packers. Just three centers graded above Linsley in the projected ranks and his ability to quickly develop a rapport with Herbert will be pivotal to the Chargers realizing their potential.

History suggests the 2020 first-team All-Pro should succeed in doing so.

The Arizona Cardinals must be strong up front if Kyler Murray and Kliff Kingsbury are to have a chance of inspiring Arizona to a successful season in an NFC West loaded with pass-rushing talent, and they made an astute addition by acquiring three-time Pro Bowl center Rodney Hudson from the Las Vegas Raiders.

The experienced Hudson, who is tied for fourth with Linsley among centers in the projected rankings, figures to be a valuable asset to Murray as he looks to take a step forward in Year 3. He recorded a pressure rate-allowed of 1.7% last season that was second-best in the league at his position.

Kelvin Beachum is a substantial asset to the ground game as his run disruption-allowed percentage of 5.9% was third among right tackles in 2020. D.J. Humphries allowed only 28 pressures on 450 pass protection snaps last season.

Murray will have three dependable players at the most important positions on the line in a year where another underwhelming campaign will not be acceptable.