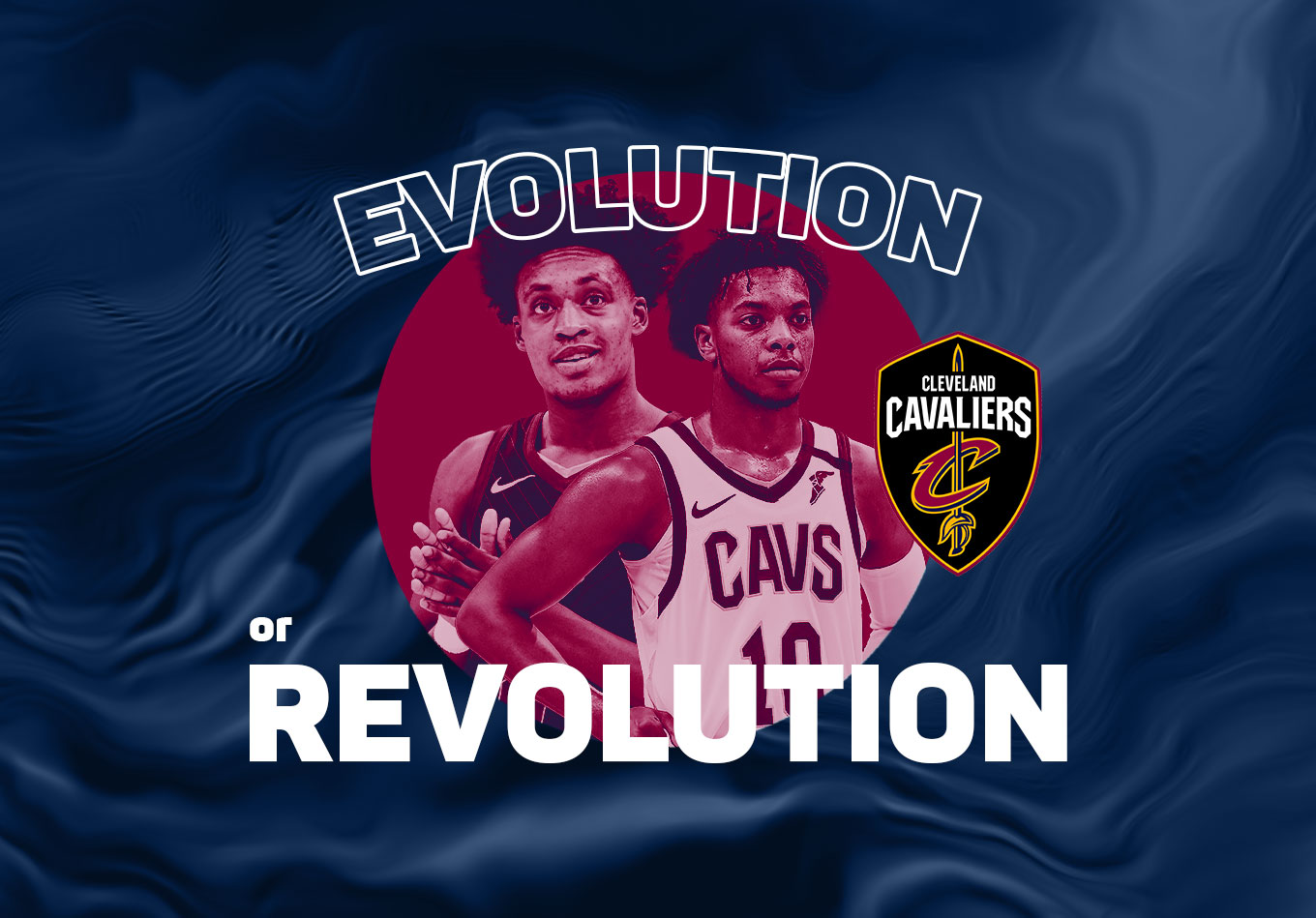 When Will Cleveland Rock Again?

Find someone that loves you as much as the Cavaliers love the NBA draft lottery.

Last week marked Cleveland’s eighth straight lottery appearance when LeBron James wasn’t on the roster – sure, there were those four Finals trips and the franchise’s first title in the middle – but Nick Gilbert’s bowties are as much of a recent lottery tradition as exuberant NBA deputy commissioner Mark Tatum or the Sacramento Kings.

For the first time since James’ return in 2014, the Cavaliers didn’t drop in the lottery. They’ll have a chance to make a third straight top-5 pick after moving up to No. 3, where they’ll be able to add another young piece to a roster that’s 60-159 since James’ most recent departure.

That would seem to be a clear indication that general manager Koby Altman and company are still in talent acquisition mode, but Gilbert isn’t exactly known for his patience. ESPN’s Adrian Wojnarowski reported on lottery night that the Cavaliers were one of three teams that would be “very aggressive” in putting a high pick in a deal that could net them “young, veteran players or All-Star-level players to accelerate their rebuild.”

That report, for what it’s worth, was before the Cavs landed at No. 3. And Altman would be foolish not to see what the pick could garner, either alone or paired with another one of Cleveland’s young players. But a team doesn’t have to act in order to listen. That’s just the due diligence of a GM who realistically needs his team to improve significantly next season in order to keep his job. Gilbert has never extended a general manager in his 16 years as owner, even letting David Griffin walk out the door a year to the day after the Game 7 title clincher in Oakland.

Let’s take a look at where this roster can improve heading into 2021-22 – and whether they should continue to build organically or need a serious personnel overhaul.

There’s a lot to like about Collin Sexton. He’s played three seasons in the league, and he’s bumped up his scoring average at least 3.5 points both times after his rookie year. His free throw rate, true shooting percentage, effective field goal percentage, FG% at the rim, and assist rate also improved in both his second and third years.

Sexton was eighth in drives per game among those who played at least 30 minutes a night and topped the 40-game mark this season, and the names among the 12 players to top 15 drives per contest is a Who’s Who of the game’s most effective guards.

On the other hand, perhaps you’ve noticed that good stats/bad team/slightly undersized guards are having a bit of a moment in these playoffs. Those were the only titles Devin Booker and Trae Young won throughout their first few years in the league, and suddenly they’re the best players on two teams in the conference finals. Booker’s first three years were very similar to Sexton’s, though the Suns star has about three inches on him.

Booker signed a five-year, $158 million extension heading into his fourth season, but the contracts Sexton’s agent will likely point to are Jamal Murray’s and DeAaron Fox’s.

The Nuggets’ now-injured star inked a five-year, $170 million deal after his third year, and he had only averaged 18.2 points the previous season. We know now that Murray’s game has continued to evolve and he’s been outstanding as a playoff performer, but the argument is there from a numbers perspective that Sexton should get much more than Cleveland may be comfortable paying him. Fox signed for five years and $163 million prior to his fourth season, then was one of five players to average 25 points and 7 assists in 2020-21. Both Murray and Fox, however, are point guards.

If the Cavs were picking sixth, seventh or eighth, they’re probably handing Sexton a max extension and figuring out the long-term viability of his pairing with Darius Garland on the fly. But with the third pick in a top-4 that features three potential franchise-changing guards (Cade Cunningham, Jalen Green and Jalen Suggs), and Garland emerging as the more well-rounded member of Cleveland’s undersized backcourt, Sexton could wind up being shipped elsewhere this offseason.

Jarrett Allen Is About to Get Paid

The Nets were the big winners of January’s four-team James Harden deal for getting, um, James Harden, but somewhat under the radar was the Cavs nabbing Jarrett Allen for what amounted to the 24th pick in this year’s draft.

Allen was always productive and efficient in Brooklyn, and he continued that in Cleveland, averaging 13.2 points, 9.9 rebounds and 1.4 blocks on nearly 61% shooting in a little over 30 minutes a night. In 602 minutes together, the Allen/Sexton/Garland trio put up a 105.9 offensive rating and a 114.7 defensive rating – a minus-8.8 net that was in line with the team’s overall net rating (minus-8.3) for the season. There are many other factors at play here, and a dearth of talent and injuries around them last season, but if that’s your long-term core, good luck.

Allen is a restricted free agent who will likely command a $20 million average annual value deal, whether that’s the Cavs keeping him or another team sending him an offer sheet that Cleveland can match. Paying a big that’s not a franchise changer that kind of money is risky territory, though losing a player who’s certainly an asset for nothing would be worse. The Cavs are almost certainly going to sign him to a long-term deal, though that could potentially be for him to land somewhere else.

So About that Top-3 Pick

Cunningham would have been an easy choice and a perfect fit in Cleveland, an outstanding playmaker and shooter who can be comfortable as the primary or secondary ballhandler. But the Cavs certainly aren’t complaining about where they’re at, a spot that should allow them to land Green, Suggs or USC big Evan Mobley.

Much of that choice will depend on what the Rockets do at No. 2, but if Cleveland keeps the pick and Mobley is on the board, he’ll be tough to pass up. He’s everything you’d want in a modern big, a fluid interior finisher who can put the ball on the floor and has enough range to eventually be dangerous from 3-point range. He’s excellent in the pick-and-roll on both ends, and Mobley can be as effective defensively in the long term as he is offensively.

Does that fit with Allen? Probably not in 2021. Even if the fit isn’t terrible, Mobley’s presence would even further reduce Allen’s impact offensively.

Remember Kevin Love? He’s played in 103 professional basketball games over the three seasons since James departed, which means he’s missed 116 professional basketball games over those same three seasons. Injuries, pouting, you name it – Love has been an unhappy customer on an noncompetitive team, which is understandable and also sort of strange since he’s earned nearly $85 million in that time, largely to model Banana Republic outfits.

Love was a seemingly strange pick to make the Team USA Olympic roster in late June, but aside from a chance to up his international fashion icon status, he’ll also have a chance to prove he can still provide value to a contender. And with $60 million remaining on the last two years of his deal, the Cavs would like nothing more than to see Love contribute in Tokyo.

Regardless of whether he’s the red, white and blue’s biggest cheerleader or actually contributes to a gold medal winner, Love probably still returns from Japan as a negative asset because of the very diminishing returns he’s provided as he heads into his age 33 season. But every day we get closer to the end of a contract that Cleveland initially viewed as a building block to their post-James rebuild, the more a contender could talk their way into him offering some valuable shooting and rebounding as a secondary option. If he does anything in Japan, the Cavs will be even more active in trying to move him – and might even get something for him.

It’s hard to gauge what Cleveland’s offseason might look like because the value of so many of their once attractive or currently intriguing pieces is unclear. The idea of betting on Sexton’s potential before he signs his second contract might be appealing to some, but not others. Allen was a coveted player prior to his landing with the Cavs, but is he someone another team would want in a sign-and-trade when he’s making $20 million a year instead of $4 million? Taurean Prince has an appealing $15 million expiring deal. Larry Nance Jr. is slated to make a little over $20 million in the next two seasons and has value to contenders as a switchable big off the bench.

The Market to Trade for an Established Star

The Cavs aren’t getting anyone of note who wasn’t born in Northeast Ohio to sign as a free agent given their current state of affairs and an ownership group that’s not exactly seen in a glowing light by players around the league.

Even if they were to pursue a building block with the assets they currently have, there aren’t a lot of options that make sense with their timeline. Go after a real big fish like Bradley Beal or Damian Lillard and you’re throwing stuff like Garland, Isaac Okoro, the No. 3 pick and more out there. Buddy Hield, Harrison Barnes, Tobias Harris or DeMar DeRozan aren’t moving the needle with the fan base or in the Eastern Conference playoff picture. Taking a swing at a depleted asset like Ben Simmons or inquiring about Brandon Ingram are interesting ideas, but it remains to be seen if Philadelphia or New Orleans would play ball.

There could be a revolution afoot in Cleveland by the middle of the 2021-22 season, but Altman’s core should get one more shot to show it can establish itself as a playoff threat in the East.

It’s hard to expect Gilbert to develop some patience now, but landing at No. 3 in the lottery might have actually bought Altman a bit more time. The Cavs seemed like a prime candidate to do something drastic if they were outside the reach of potential franchise-changing stars in the top four. But the likelihood of adding Green, Mobley or Suggs has injected this front office with the hope that they can build a long-term contender – and perhaps enjoy a sliver of even moderate immediate progress that will be gobbled up with the optimism of a fan base that hasn’t had much reason to expect any over the past three years.

Having their cake and eating it, too – a sixth seed this season, flashes from their potential rookie franchise cornerstone, offensive progress from Okoro and a further star turn from Sexton or Garland – is a possibility. But so too is finding the development of yet another rookie painfully slow, a lack of development from Okoro, and the realization that their undersized backcourt duo is never going to actually achieve some of the highs that Lillard and CJ McCollum once had together.

Barring an unlikely trade candidate becoming available, the time to revolutionize this roster isn’t now. Another year of evolution might seem to be a painful step on an already arduous process in Cleveland, but for the first time since James left, there’s a legitimate reason to believe that what they’re building will eventually pay dividends.