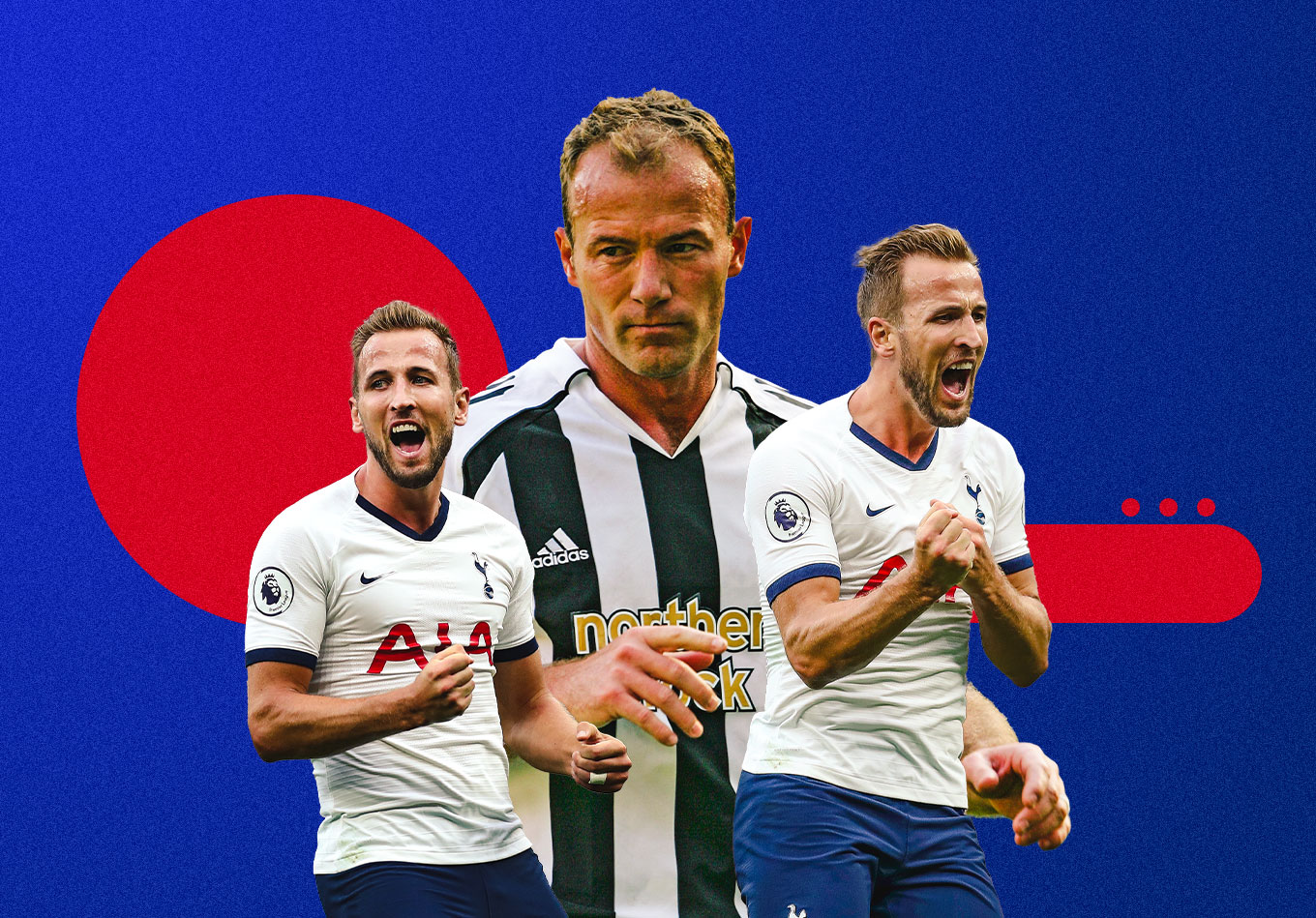 Fifteen years ago, Alan Shearer scored his 260th – and final – Premier League goal. The Tyneside legend scored more goals than any other player in the history of the competition. It’s a record that has looked impregnable for so long. Until now. Here’s what Harry Kane needs to do to break it.

After the news that Sergio Agüero would be calling time on his glittered Manchester City career, Jamie Carragher sparked a great deal of (healthy) online discussion by revealing his top 10 Premier League strikers of all-time.

It’s often said that football is a game of opinions. And the opinion of an ex-professional defender who’s had the misfortune of playing against many of these strikes is about as reliable as it comes. But we’ll bite. Just a bit.

You can never really argue against Henry being top of any table, although given the author of this list, his position at number one may have had something to do with this:

Now, the list isn’t purely based on goals – it also includes their importance and the trophies the players have won – but has Didier Drogba got some dirt on Carragher? He’s undoubtedly one of the biggest big-game players of them all, but those performances all came in competitions outside the Premier League. He only scored 104 goals in 254 games, and he only had two 20+ goal seasons. Heck, Romelu Lukaku’s got a better scoring record (113 in 252), and you wouldn’t consider him a top-10 candidate, would you? But we digress.

The real point for sharing that top-10 rundown is that there are two players who might consider themselves hard done by: Alan Shearer and Harry Kane.

Shearer’s tally of 260 Premier League goals remains the record to beat. And Kane, already tied for eighth on the all-time scoring charts, is the only active player you’d give a reasonable shot of eclipsing that record.

There’s a chance (read on to find out how probable) that the Spurs captain becomes the Premier League’s greatest ever scorer. Pretty remarkable for a one-season wonder.

But first, to Shearer…

Alan Shearer: The Records You Didn’t Know About

On this day in 2006, Shearer stepped up to smash a penalty past Sunderland’s Kelvin Davis, as his Newcastle side swept aside their Wearside rivals. In true Shearer style it was powerful, ruthless, no nonsense. And it was the last of his 260 Premier League goals, a record that stands some distance ahead of all others:

Shearer’s ascension to greatness began far from home on the South Coast, in the red and white of Southampton. After numerous games as an unused substitute and only a handful of substitute cameos, Shearer’s big moment came in April 1988 when he made his full First Division debut in Arsenal’s visit to The Dell. Two fearless headers and one tap-in later, and the striker had become the most talked about prospect in English football. A hat trick at just 17 years and 240 days old meant Shearer had broken Jimmy Greaves’ 30-year-old record in becoming the youngest player ever to score a top-flight treble. It’s a record that still stands.

It sounds crazy to say now, but Blackburn Rovers’ signing of Shearer in 1992 wasn’t a guaranteed home run. Despite that explosive start for Saints, Shearer’s scoring record was modest over his five seasons at the club, and he finished with 23 goals in 118 league appearances. Of course, he was still a kid for a lot of that spell, still developing, still growing, and he was exposed to the demands of top-flight football gradually over his time at the club.

But at Blackburn, everything changed. Shearer evolved into a greedy, goalscoring machine. Frighteningly physical, combative in the air and devastating in front of goal.

Not overawed by the £3.6m record price tag on his shoulders, the Englishman announced himself in some fashion on his Rovers debut with two stunning goals.  The first a lashing volley, the second a sumptuous curler. The saying goes you’re either a great goalscorer, or a scorer of great goals. Shearer was undoubtedly both.

That debut was a sign of things to come and Shearer – despite missing the first half of the season through injury – finished his first season at Blackburn with 16 goals in 21 games.

After shaking off that injury, Shearer went on a goalscoring rampage, raising his right hand in celebration more than 30 times in three consecutive seasons between 1993 and 1996. But 1994-95 was his masterpiece, his performances propelling Blackburn Rovers to their first and only Premier League crown. In the process, they snapped an 81-year wait between English top-flight titles. This remains the longest broken drought ever.

New signing Chris Sutton chipped in with 15 goals in that campaign, but he was the support act in the Shearer show. Shearer’s 34 goals made up 42.5% of Rovers’ total that season – no other player has contributed a higher percentage to a title-winning side.

As if his 34 goals weren’t enough, Shearer also provided 13 assists. No player has ever been involved in more goals during a single Premier League season than the Geordie’s 47 that campaign.

The goals did not stop.

He won the second of his three Golden Boots the following season, plundering another 31 goals. It was the third successive season that he had scored 30‑​plus goals in league competition. Six other players have scored 30 or more in a Premier League campaign, but no one more than once. And only Thierry Henry has won the Golden Boot more times (four).

Shearer’s lethal spell at Blackburn set records alight. An instinctive swivel and strike on the edge of the box against Tottenham in December 1995 brought up his century of Premier League goals in just 124 games – the quickest player to this landmark in the history of the competition.

An injury-time winner against the same side in March the following year completed his fifth hat trick of the season, the most trebles in a single campaign.

By the time Newcastle signed Shearer in July 1996, he had an astonishing record of 140 goals and assists in 138 league appearances (112 goals, 28 assists).

The goals did not stop.

A brief tangent to the present day now. It’s November 2020 and Diogo Jota has scored in each of his first four Premier League home games for Liverpool. Only three players have ever scored in more of their first home games for a single club in the Premier League: Alan Shearer at Newcastle (first 15), Les Ferdinand at Newcastle (six) and Jermain Defoe at Portsmouth (five).

Yes, 15. Fifteen home matches in a row that Shearer delighted the faithful at St. James’ Park. He was adored. He was idolised. He was home.

Shearer scored 25 goals in his first year at Newcastle, trying desperately to bring them the Premier League title they so desperately craved. His iron will was not enough though, and the Magpies finish second for a consecutive season. They’ve never reached those heights again.

By the time he retired, 10 years later, Shearer had overtaken Jackie Milburn as Newcastle’s all-time top scorer, despite his top seasons coming elsewhere. He is still the Premier League record scorer with 260. And if it hadn’t been for three bad injuries along the way, that tally could have been a whole lot higher.

Can Harry Kane Break The Record?

Agüero is the closest active Premier League player to Shearer’s record (181 goals), but with the Argentine calling it quits on his Manchester City future, it may be down to Kane (162) to beat his fellow Englishman’s record.

Kane, together with partner-in-crime Heung-Min Son, has been the only positive note in a wretched season so far for Tottenham. Despite playing on a Spurs side that has often favoured a defence-first approach under José Mourinho, Kane has still got his goals. He’s currently joint-top of the Premier League with Mohamed Salah at 19.

Kane’s next strike will take him into the 20s and would comprise his fifth 20+ haul. Only two players have managed more than that. If you don’t guess at least one before your eyes wander down, you haven’t been reading carefully enough.

And just two more goals will see Kane leapfrog Robbie Fowler into seventh in the all-time Premier League scoring charts. But Kane won’t care about seventh. He’ll have his sights on first.

Let’s assess the challenge ahead of him. Here’s what we know:

The above plot focuses on the goals scored by the Premier League’s top 50 all-time scorers and the number of games it took them to get there.

As mentioned, Kane’s scoring at a rate of 0.68 goals per game. For Kane to take Shearer’s crown at that current trajectory, he would have to play about 145 more league games. That’s about five more seasons averaging 30 games, taking Kane up to 260 goals by the 2024-25 season. He’d be 32.

Easy, right? Sure, if you take fitness and form out of the equation.

That projection is under the unrealistic assumption that Kane will continue to score at this pace for the next five years. Lionel Messi and Cristiano Ronaldo have redefined modern-day goalscoring standards, and 32-year-old Robert Lewandowski (35 goals) is streets ahead in the European Golden Boot race, but we should expect Kane’s rate to slow down. Particularly if he drops back into a deeper role for Spurs, as he has done on occasion to great effect this season already.

The important factor here is time. And time is very much on Kane’s side.

The above plot looks at his current trajectory, and that of his Premier League rivals, by the age at which they scored their goals. After forcing his way into the Spurs team in 2014-15, Kane’s not looked back. His line is just as steep as Shearer and Henry’s but, crucially, it starts a lot earlier. The fact that Shearer’s early career straddled the First Division and the Premier League means that all his goals for Southampton (23 in total) essentially don’t count in this debate. That could be the difference maker. It seems a little unfair, but Kane won’t care a jot. The point stands that at his current age, Kane has scored more Premier League than anyone else.

Say maybe Kane does drop back into a slightly deeper role a la Wayne Rooney’s career and his scoring rate falls as a result. Rooney’s goals per game rate was 0.42. Taking that rate going forwards, it would take Kane 235 games to eclipse Shearer, in anywhere between seven or eight seasons. By which point an ailing, but triumphant, Kane would be 35. It’s doable, but suddenly it’s sounds a lot tougher.

As the record-holder himself has said, whether Kane beats the record will come down to two major elements:

“If he avoids injury and continues his career here rather than trying his luck abroad, he will have the opportunity,” Shearer said of Kane all the way back in 2016.

Longevity is the name of the game now for Kane. He will hope that his history of ankle injuries, together with a bad hamstring tear, is now full behind him after he was finally allowed to rest during the COVID-19 enforced break. And if reports are true that Kane’s frustrated by a lack of trophies in north London, then a move to Manchester, particularly the blue half, would certainly help his chase.

One thing’s for sure though, by the time Kane hangs up his boots, there’s no way he’s still in 10th spot in Mr. Carragher’s list.