Why Teams Are Queuing up to Sign Marcus Thuram 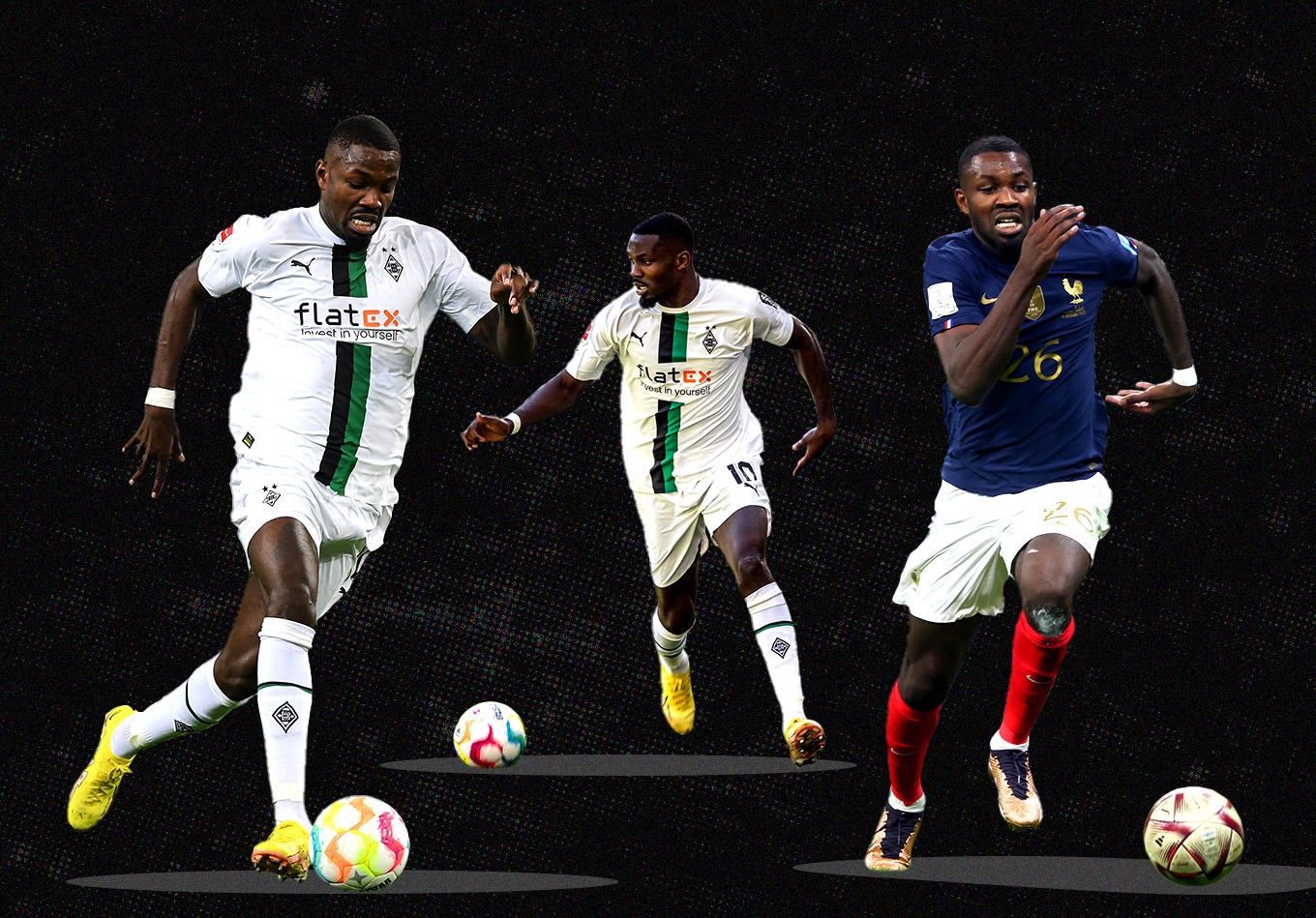 In recent years, we’ve started to see more instances of top-level footballers purposefully run down their contracts until their expiration. Re-signing does come with a bump up in wages and added security against the possibility of future injuries. However, this also gives clubs greater leverage to demand more in future transfer dealings with the added years of control from the new deal. By accepting the considerable risks on their end, players of a certain threshold can exert more influence over their preferred destination by not re-signing, and it’s also more lucrative for them to hit free agency.

This is where Marcus Thuram comes into the picture. He has long been a fascinating player dating back to his time in Ligue 1 with his unique skill set at roughly 6-foot-3. It wasn’t hard to envision him scaling up on better teams with further development. Moving to a higher tempo league like the Bundesliga was a smart career move, and when healthy, he’s been one of the better players in Germany during his time there. That’s continued this season as only Christopher Nkunku has matched his 10 non-penalty goals in the German top-flight.

Players who are in their mid-20s and in the midst of a career year rarely have their contracts expire at the end of the season. But that’s a major reason why Thuram has been highly talked about in recent days as major European clubs see him as a target either now for a cut-price transfer fee or when he becomes a free agent in the summer. So, it’s important to get a better idea on what exactly Thuram brings to the table and how he generates his impact.

Even though Thuram has become a full-time striker, his movement hasn’t become static as he still floats around the final third. When positioned centrally, he can play off the shoulder of central defenders and gesture for passes into the box against medium or high defensive lines.

Against set defences, he’ll sometimes use his physicality to get into valuable areas with his off-arm. There’ll be other moments where he’ll stay idle and hope the play develops around him in a favourable way inside the box. Making yourself harder to keep track of is important for generating good shots, and he does this against teams with higher defensive lines. His 6-foot-3 height and leaping prowess also makes him a credible target for crosses.

During fast breaks is when Thuram’s awareness and pace comes into play, especially against teams that don’t have a good rest defence. Beating disorganised defences is low-hanging fruit, but it’s still important to take advantage of those situations and he does that. He also has to be respected when drifting to wider positions since he can carry and beat opponents off the dribble.

One example of Thuram’s excellent off-ball movement comes from a 2-2 draw with Schalke in the middle of August.

Once the ball gets circulated to Ramy Bensebaïni in the middle third on the left side, Thuram bends his run on the blindside of Malick Thiaw, who’s trying to return level with the rest of the defensive line and plays against the defender’s momentum by sprinting towards the long ball.

While the end result is a left-footed shot dragged wide towards the far post, it’s an illustration of his proficiency in moving into space when given the opportunity.

The overall results have been noteworthy. Among players in the Bundesliga who have played in at least 25% of the available minutes, Thuram ranks fifth in shots per 90 minutes at 3.7, and first in non-penalty expected goals at 0.63. What’s also notable is these numbers would rank as his personal best by a decent distance. The end result is a tidy shot chart with a ton of attempts from the central zone.

Thuram isn’t tasked with handling a ton of playmaking duties. He’s only in the 17th percentile among Bundesliga forwards in open-play passes and the 46th percentile in completed passes into the penalty box this season. He’s serviceable within a limited role. One area as a passer that he’s pretty good at is playing with his back to goal and making quick lay-offs and flicks to nearby team-mates. This is especially true when facing smaller defenders. He shows okay vision when dropping deep and surveying what’s around him, but it’s not a strength of his. Like with other off-ball creators, he has the capacity to run into the wide zones and attempt those valuable cutbacks.

For a man at his height, Thuram’s combination of top-end speed and strength is impressive and it makes him a handful to contain for defenders. The explosiveness with his first step is quite solid when in wide areas in one-vs-one situations, albeit it’s not at the absolute elite level. What helps him is once he gets a bit of separation, it’s hard to muscle him off the ball.

No player in the Bundesliga this season moves the ball further up the field per carry than Thuram at 9.70 meters. Due to his higher centre of gravity, it can sometimes look a bit clumsy if he isn’t successful with the change of pace dribble. His most productive carries have tended to be from him on the left side sizing up his opponent with a head of steam. There are instances of him having tunnel vision and looking to get his own shot rather than making the extra pass to create for others. He also leads the league in total number of carries ending in a shot for himself (19).

How Good is Marcus Thuram?

It’s impressive to see Thuram continue his evolution in the #9 position as another mobile tall striker. He keeps opposition defences honest by constantly looking for opportunities in behind medium or high blocks.

Opponents also have to deal with him trying to attack the box off the dribble. He’s a dynamic threat in transition either carrying the ball or moving without it which has made him very suited to German football. His passing is serviceable but is arguably the weakest part of his skillset. It seems clearer that the 2019-20 season was not his norm in terms of playmaking, albeit he certainly helps a bit with his back to goal.

The off-the-ball movement not quite being at a great level is partially shown when looking at how Thuram ranks in Europe’s top five leagues in passes received in the box. It’s above average but a level or two below some of the best.

It is fair to note that Borussia Mönchengladbach tend to bait opponents to press them high during build-up and play through that press, so they don’t have a ton of possession in the final third, limiting his opportunities to create havoc on the move. Thuram’s lack of playmaking also limits his ability to generate elite shot output for himself and others.

Thuram’s progressive carrying makes him somewhat different from other off-ball forwards like Tammy Abraham or Victor Osimhen and more of an on-ball threat. Those two can’t consistently create the same amount of havoc off the dribble, even though both are more clever and impactful runners without the ball.

Thuram’s sequence usage % is still not very high with his lack of passing, but he’s been one of the most relied upon play finishers which shows how much Gladbach have depended on him to make something happen.

With the rumours of Premier League clubs having interest in acquiring Thuram (in addition to Internazionale and Paris Saint-Germain), there’ll inevitably be a bit of chatter concerning whether he’ll be the next talent to suffer from a phenomenon called the Bundesliga Tax. It refers to the drop off in production when players move from the Bundesliga to the Premier League. Previous analysis has found on average a noticeable decrease in overall output.

The different styles of play between the two leagues, as well as the general decline of the Bundesliga in recent years has certainly played a part.

There are reasons to think Thuram has a chance of not falling victim to the ‘tax’ though, should he make the move to the English game.

For one, he had some success earlier in his career in a league with less space (Ligue 1), particularly with his dribbling capacity. Being able to perform solidly as an outlet should also theoretically travel across leagues. In an admittedly small sample size, his production in European competition has remained solid.

It’s not often that good to very good talents with a proven statistical track record at age 25 are nearing free agency. Thuram’s got his flaws which make it harder to envision him reaching another level.

There’s still question marks over how good his movement is against lower defensive blocks, which would be key in how well his skillset translates to a dominant possession side (or clubs which aspire to become one) in a starting XI.

He’ll likely not bring tons of added value in the playmaking department, but in terms of finding a cost-effective stopgap with the flexibility to legitimately play more than one position, he’s more than qualified.

The unique circumstances at play have made Thuram one of the most interesting figures in football at the moment.