Is Randal Kolo Muani Football’s Next €100m Forward? | The Analyst 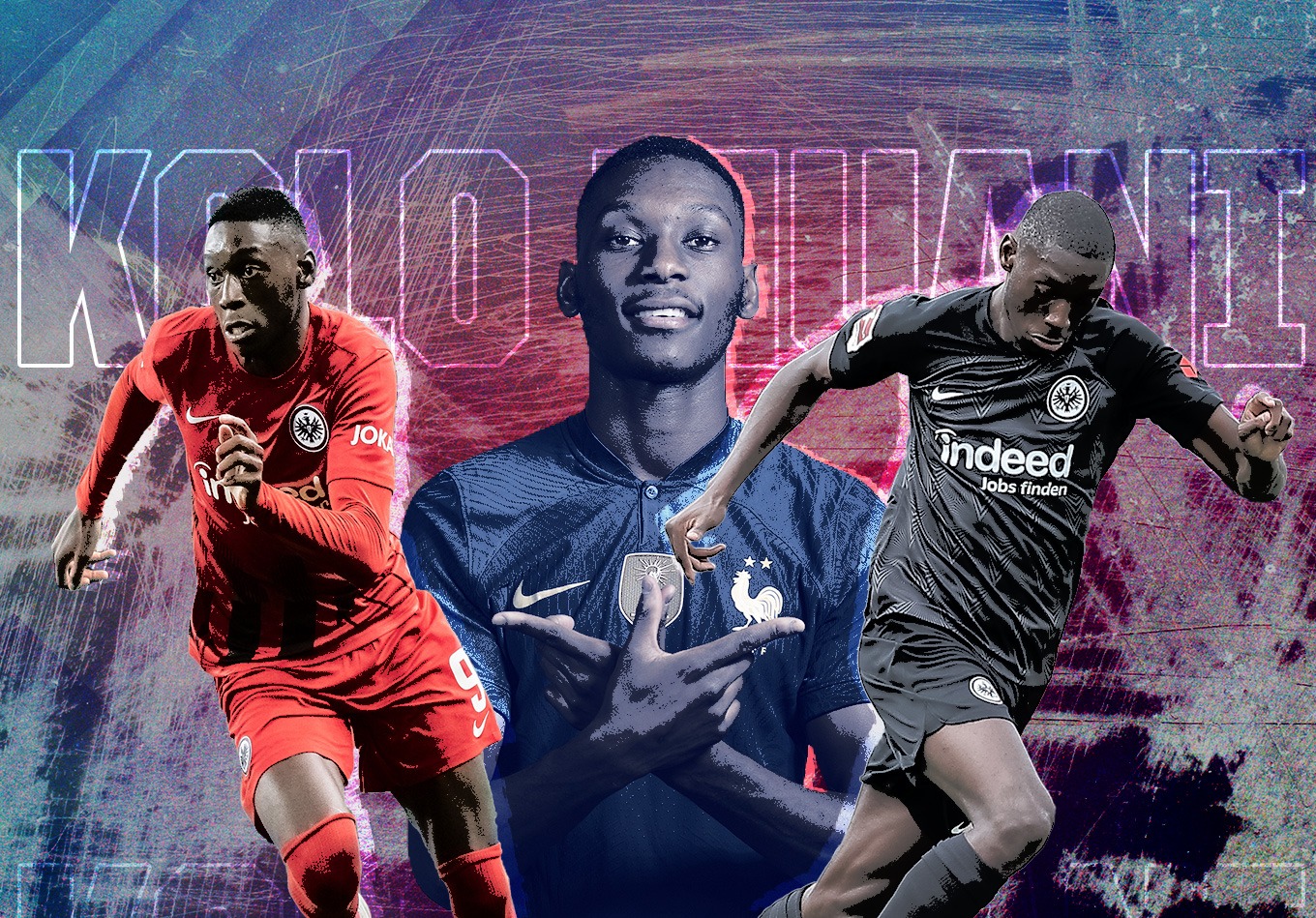 Opta Analyst has already taken a look at Bundesliga hot property Marcus Thuram. The exciting forward is attracting interest across Europe and could be on the move for next to nothing this summer as his contract expires. But another Frenchman based in Germany who was at the World Cup is also being touted for a huge move in the near future.

Not if you ask Eintracht Frankfurt sporting director Markus Krösche:

“We will not sell Kolo Muani,” Krösche told Kicker recently, before qualifying his statement.

“Something extraordinary can always happen, but the conditions for us to keep working together, which I think are pretty important, are good.”

Something extraordinary like an enormous bid, perhaps? With Kolo Muani linked with Manchester United and Bayern Munich in the last couple of weeks, early suggestions in the German media were that Frankfurt would need a bid of more than the €63m record sale of Luka Jović to be convinced to sell. More recently, Sky Germany have suggested Frankfurt will demand €100m for the player in the summer.

On the surface, you can see why Frankfurt would value him so highly. Only Lionel Messi, Neymar and Kevin De Bruyne have delivered more assists across Europe’s top five leagues so far this season. Only three out-and-out strikers – Gabriel Jesus, Georginio Rutter, Kylian Mbappé – have completed more dribbles. And of players with at least 10 appearances, only three forwards — Gerard Deulofeu, Iago Aspas, Alexis Sánchez — have created more chances per 90 minutes.

Since his arrival from Nantes in the summer, it has quickly become clear that Kolo Muani is well suited to playing in the Bundesliga, where teams generally create plenty of counter-attacking opportunities and opposition sides afford forwards plenty of space to run into.

For a player with the close control and running ability of Kolo Muani, that can make things very simple. Able to kill the ball when it arrives at his feet, the 23-year-old baits defenders in before pushing it into space and beating them on the turn. Both when dribbling and when looking for a pass, Kolo Muani will attract opposition defenders before changing the direction or the speed of the attack.

Union Berlin are one of the league’s more conservative teams but even against them the forward found space in behind, receiving the ball with his back to goal, before backing himself to beat his marker for pace.

Having made so much ground, he drags another defender across. But with his combination of quick feet and long stride he makes his way to the byline.

When he gets there he doesn’t panic, instead picking out Mario Götze with an excellent cutback where many players would keep their head down and lash the ball across goal.

Götze had the time and space to sweep the pass home.

This is not an isolated pattern of play. Kolo Muani consistently looks to cut the ball back for a team-mate in space rather than trying to squeeze the ball between bodies for an onrushing attacker.

Whether you look at his time in Nantes last season, or with Frankfurt this year, his chance creation profile paints a clear picture. He’ll regularly wait until defenders are committed to closing him down before looking to square the ball to an open team-mate.

Playing as a second striker, Jesper Lindstrøm has benefited enormously from playing with his new strike partner. Götze, arriving late on the edge of the area, is another who receives regular service, with the vast majority of Kolo Muani’s chances created coming as cutbacks or square passes.

Perhaps related to his nine league assists already this season, Kolo Muani seems to prefer his team taking high-percentage shots over just pulling the trigger. His own shot tally hardly stands out and it never really has, with the forward only taking a modest 2.3 shots per 90 in the league so far this season.

But it’s when he shoots – or when he doesn’t – that makes Kolo Muani interesting. As well as looking for better-placed team-mates whenever possible, the striker takes multiple touches when in front of goal while looking to fashion a shot for himself. Sometimes it seems he doesn’t work the ball out of his feet quickly enough to get shots off, but the trade-off is higher quality shots when he can pull the trigger.

Kolo Muani’s presence in the box – nobody in the Bundesliga has more than his 96 touches in the opposition area and only Sadio Mané has more if you adjust for minutes played – attracts opposition defenders. That’s a big reason for his assist numbers but also his impressive return of 0.16 xG per non-penalty shot. That figure is the highest of any Frankfurt player this season.

And that is no accident. In front of goal, Kolo Muani just does not panic. If a shot isn’t on, he doesn’t take it, or he waits until it is, like against Dortmund as he quickly turned inside Mats Hummels…

…and did the same to Nico Schlotterbeck…

…before letting rip with a clear sight at goal.

The striker may find this harder as players in the league figure him out more – he is incredibly averse to using his left foot and Hummels should have better read the jink inside – but his speed and close control means even then he will be hard to stop.

There are 51 Bundesliga players with 20 or more shots this season. Exclude penalties and, of those players, Kolo Muani ranks ninth for xG/shot (0.16) and that is even down on the 0.21 xG/shot he registered in Ligue 1 with Nantes last season, ranking fifth best in the entire league.

That is majorly down to timing and decision making, because Kolo Muani’s movement in the final third, especially against set defences, can actually hold him back at times when it comes to getting on the end of chances.

More than anything, the Frenchman is comfortable facing goal with the ball at his feet and trying to beat a defender. Sometimes that means he gets dragged towards the ball, where other strikers would hope to peel off and ghost into the area unnoticed.

Real poachers will often look to get themselves in between the full-back and a centre-back when a ball could come into the box. This is where gaps most often open up for strikers, who drop to their markers’ blind-side and are not covered by a full-back tucking in.

But when Frankfurt are in settled possession and these gaps appear, Kolo Muani can neglect them, instead preferring the idea of receiving a ball into feet even in the tightest of spaces.

He could really improve his shot tally, and thus his goalscoring record with better positioning when playing down the middle in these situations. He often arrived late at the back post playing for Nantes but that was a product of his position, as he sometimes would line up out wide, enabling him to drive into these back post spaces when the ball was on the opposite flank.

Still, his quality on the ball and willingness to receive it to feet still shines in these situations – two passes on from the above screenshot and he has the full attention of five opposition defenders, even though he is 20 yards out with his back to goal and the ball not yet under control.

In this instance he was crowded out but the untracked late run of Götze (number 27) into the area shows just how dangerous it can be to have a player like Kolo Muani –technically excellent and dragged towards the ball – as long as his team-mates have the movement to capitalise.

Even when out wide, seemingly pinned on the touchline, he attracts multiple defenders but has the skill and the speed to evade them and break into space…

…before making the right choice at the byline once again.

The peculiar cocktail of his abilities make him an intriguing forward.

Overall, Kolo Muani is a superb dribbler who is unselfish and considered with his final ball. His physical frame and lightning pace make him is incredibly difficult to dispossess.

But ultimately, he does not shoot as much as you would hope considering the prices being mentioned. And then there’s the worry that his skills may not translate to another team in another league.

So, what of those links to Manchester United? None of their last three striker signings – Odion Ighalo (on loan, aged 30 at the time), Edinson Cavani (30), Cristiano Ronaldo (36) – remain at the club and a long-term solution is needed.

With work on his movement in the final third, Kolo Muani could become an incredibly dangerous striker in any league. He already could be as long as he is paired with players willing to run in behind him, and Manchester United certainly have that in Marcus Rashford and Bruno Fernandes. But, right now, Kolo Muani’s profile may be best suited to playing on the wing if he were to move to England, somewhere Nantes often used him last season.

But then there’s the Lederhosen-wearing elephant in the room. Erling Haaland aside, attacking players from the Bundesliga have not always adapted well to the Premier League in recent seasons. Just watch Kolo Muani for Frankfurt and it’s easy to see why.

Eintracht Frankfurt advance up the pitch at 1.7 metres/second this season. It’s a rather average direct speed for a Bundesliga team, but it would make them the most direct team in the Premier League by some distance. Their sequence time – the average time each possession lasts – is 7.53, which again puts them around the middle of the pack in the Bundesliga but would have them at the extreme end of England’s top-flight.

Forwards in Germany have more space to drive into and their team-mates are in more space when they join them, perfectly playing to Kolo Muani’s strengths. Of the 18 Bundesliga teams this season, 12 have registered more direct attacks than build-up attacks. The same is only true for six out of the 20 Premier League sides.

Manchester United are the Premier League side with most direct attacks in the league, a sign the Frenchman really could fit in, and, like Thuram, he has already shown his class in the slower pace of Ligue 1. That said, he would still probably be best off on the wing for now.

That role would see him with more space to drive into, give him the chance to isolate defenders, and play into his strengths when it comes to picking a final ball. It also negates that issue of movement in the box, making him a bigger threat when the ball is on the opposite flank.

But United already spent a nine-figure sum on a right-winger just six months ago. Agreeing to part with a similar amount for Kolo Muani, at least right now, and at least for Manchester United, would be a big risk. 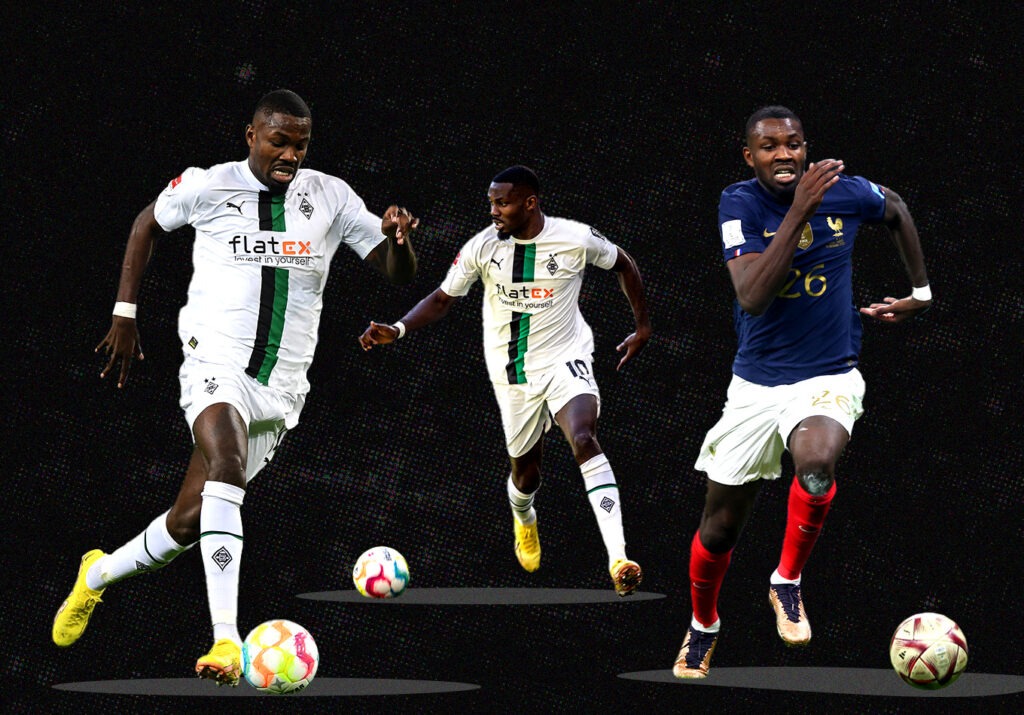