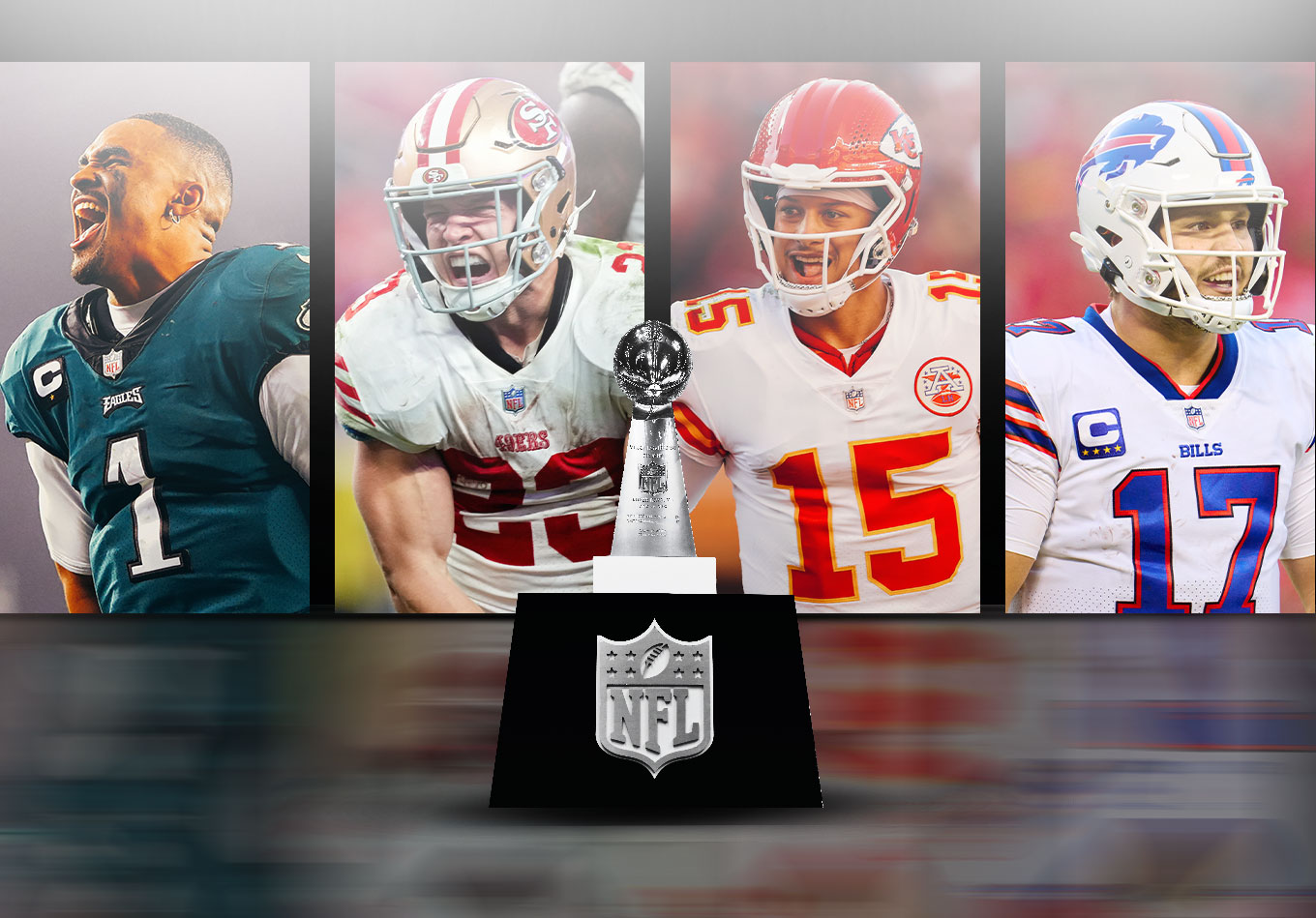 The NFL playoffs rarely disappoint, and this edition is shaping up to be no different.

We begin with the “Super Wild Card Weekend,” where anything can happen. Why? Because all six games this weekend are rematches from the regular season, leading to familiarity between all of these squads.

In fact, three of the matchups are between divisional foes, meaning they’ll be squaring off for the third time. And another one features the greatest quarterback of all time, Tom Brady, hosting the Dallas Cowboys, a team Brady has never lost to in his illustrious career.

The model projects every future game to give a predicted win percentage for each team across its remaining games. Rather than being a simulator of future games, the projections are calculated by looking at each team’s quarterback and QB EVE – performance in terms of yards added in expected passing situations – as well as team values for pass protection/pass rush, skill position players/coverage defenders and run blocking/run defense.

The weekend starts in Santa Clara, where the red-hot, Brock Purdy-led San Francisco 49ers host their heated rivals from the Northwest. Our projections favor the 49ers to beat the Seattle Seahawks at a rate just a smidge above two-thirds of the time, seemingly in line with the dominance they showed in handling them by a combined score of 48-20 in two previous meetings.

A word of caution before writing off Geno Smith and the Seahawks completely… the 49ers also went 2-0 in the regular season against the Los Angeles Rams last year before losing to Matthew Stafford’s bunch in the NFC championship game.

The Saturday night matchup, however, is the treat of the day and the one that was closest to a coin toss for the model. Justin Herbert’s Los Angeles Chargers travel cross-country to Duval County to take on Trevor Lawrence and the Jacksonville Jaguars.

The projection expects this game to be close throughout, ultimately providing the smallest of edges to the Chargers with a 50.1% win probability. The key for the Chargers resides with a defense that finished the season dead last – by an enormous margin – in first-down defense. In fact, not only did the Chargers allow the most yards per carry on first downs, but they also surrendered the worst opponent passer rating on first down.

If Lawrence and the Jags, who were eighth in the NFL in passing success on first downs, can take advantage of the early downs, they’ll keep Herbert and touchdown-leader Austin Ekeler on the Chargers sideline and give themselves the best chance of winning.

Sunday’s slate opens with maybe the biggest quarterback discrepancy of any of the first-round playoff games. Facing a must-win game in Week 18, Skylar Thompson completed 20 of 31 passes for 151 yards in his second career start. His Miami Dolphins didn’t score a touchdown, but they still found a way to beat the offensively inept New York Jets.

Unfortunately, their opponent this week is likely to score more than six points. Josh Allen’s Buffalo Bills finished the regular season second in yards and points per game, on the strength of being the only NFL team to finish with a greater than 50% success rate on third downs.

And just for good measure, after the Bills scored two kickoff return touchdowns against the New England Patriots’ normally stingy special teams, they now face the team that allowed more yards per kick return than any other in the NFL. As the seeding suggests, the Dolphins are the largest underdogs of the six wild-card matchups, with the model assigning the Bills a greater than 70% chance of winning.

Somewhat surprisingly, the most lopsided NFC game this weekend according to our projections will occur in Minneapolis. Get this, it’s a game between two teams with negative point differentials on the season – yes, the Vikings won 13 games with a minus-3 point differential.

The model isn’t particularly high on either team, but the New York Giants profile as a team that should be picking in the top 10 of the upcoming NFL Draft. It ranked 22nd in offensive EVE (Efficiency Versus Expected) this season and 24th on defense. With home-field advantage and a superstar receiver in Justin Jefferson that torched the Giants on Christmas Eve to the tune of 133 yards and a touchdown, the Minnesota Vikings lead all NFC teams with a 71.2% chance of advancing to the divisional round.

Of course, if the morning game doesn’t feature the biggest gap in quarterbacks, then Sunday night’s AFC North primetime battle holds that distinction. With Lamar Jackson sidelined, it’ll be Tyler Huntley at the helm for the Baltimore Ravens. If Jackson were healthy for this game, the Ravens would have been our model’s favorite, but with Huntley, it’s the Cincinnati Bengals that have a 57.9% win probability.

You know that age-old adage that defense and a strong run game translate to playoff success? Well, this game will be the litmus test. The Ravens finished the season first in rushing EVE. And while their defense struggled at the beginning of the year, no defense was better down the stretch. The Ravens allowed only 92 points in their final eight games – the fewest in the NFL.

Meanwhile, Joe Burrow’s Bengals finished the season 29th in rushing yards per game, in part because no team threw the ball at a higher rate than the Bengals in the first half (67.6%). But of course, with Ja’Marr Chase and Tee Higgins, passing is the Bengals’ strength and they finished fourth in the NFL in first-half points per game.

This game will come down to Baltimore’s defensive line against Cincinnati’s offensive line. If the Ravens can dominate up front against a Bengals team that ranked 24th in pass protection win percentage and 31st in run block win percentage, they’ll have a chance of making this a close game in the fourth quarter. And with Justin Tucker as your kicker, anything is possible.

It’s the exact same story on Monday night. If Micah Parsons and his defensive-line mates can dominate the Tampa Bay Buccaneers, Brady will struggle to produce in the passing game all night.

Dak Prescott and the Cowboys are solid favorites with a 56.7% win probability, though having to go on the road to face Brady isn’t much of a reward after their solid 12-win season was usurped by a dominant Philadelphia Eagles team. That could spell trouble because the Cowboys finished the season 10-1 in indoor stadiums (including SoFi), but only 2-4 outside the confines of a dome.

There are trends that lean in the Bucs’ favor, but the model sees a Cowboys team that finished in the top 10 in our offensive and defensive EVE rankings. Dallas is the favorite to advance.

No surprise of course, since they’re guaranteed of advancing out of the first round and were the top seeds in their respective conferences, that the Eagles and Kansas City Chiefs are the teams most likely to advance to the Super Bowl with 59.9% and 43.3% probabilities, respectively.

Let’s start with the Eagles’ jaw-dropping number. This is a team that our model projected to finish with 12 wins before the season, and became our heavy favorites by Week 3.

Jalen Hurts has played at an MVP level, and Philadelphia will be overwhelming favorites against whoever it faces in the NFC.

The same cannot be said for the Chiefs, who have a potential neutral-site game waiting for them against the Bills in the AFC championship game. But with an easier path to reach that game, Patrick Mahomes and Co. are still the favorites in the AFC.

Perhaps the biggest surprise is that our model sees the Vikings as having a higher probability of reaching the Super Bowl than the 49ers. The way it works in our simulation is that with the Vikings being larger favorites than the 49ers this weekend, they are more likely to advance to next week.

So even though the 49ers would be favored in a potential head-to-head matchup in the divisional round, the discrepancy this weekend is large enough that the Vikings are more likely to reach the NFC title game.