Most Premier League Own Goals: The Players | The Analyst 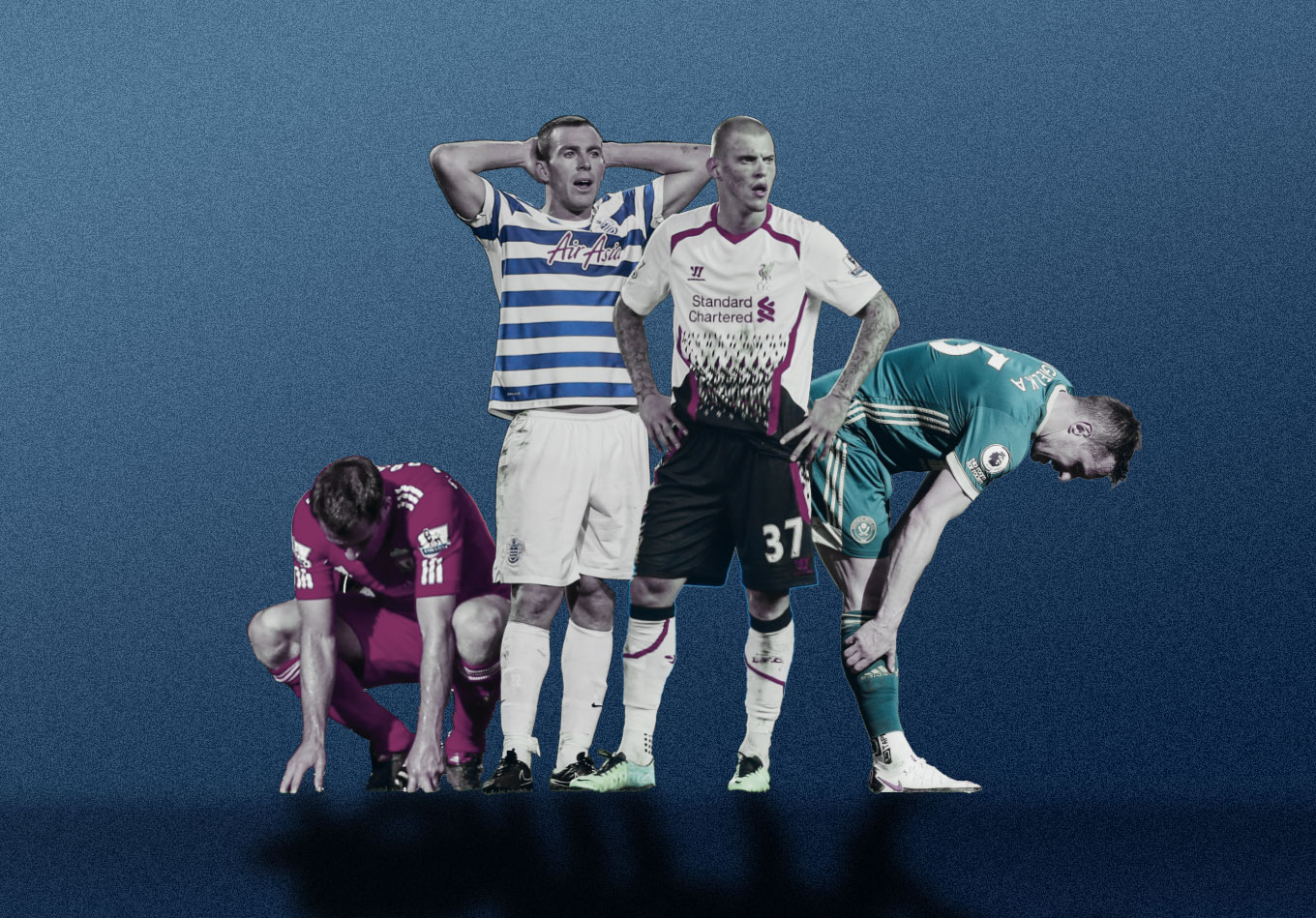 Since Nottingham Forest goalkeeper Mark Crossley fumbled the ball into the back of his own net in September 1992, there have been over 1,000 own-goals in Premier League history. But who leads the way in terms of these goal scorers? We’ve taken a closer look at your all-time favourite tragic heroes.

The owner of perhaps the most unwanted individual record in the history of the Premier League is Richard Dunne, who also jointly holds the record for the most red cards along with Patrick Vieira and Duncan Ferguson (8).

It did not have to end this way for the Republic of Ireland centre-back who managed to avoid finding the back of his own net in 60 appearances for Everton. But once Dunne settled into life at Manchester City, the floodgates soon opened, beginning in calamitous fashion against West Brom on 28 December 2004 as his Man City side looked to be cruising to victory. A long ball cannoning off his shins, from outside the box, past a stranded David James, with Robert Earnshaw desperately sprinting after the ball to claim the goal as his but failing to get there in time.

This set a little bit of a trend for Dunne who never saw the sides he play for emerge victorious when he scored an own goal, with the defender seeing exactly half of his own goals coming in the last 15 minutes of match, including a 93rd minute equaliser for Queens Park Rangers against Aston Villa in 2011.

It would be for Rangers that Dunne completed his haul of 10 own goals in the Premier League with Liverpool being the grateful beneficiaries on 19 October 2014 – a match in which QPR netted twice in the back of their own net to hand Liverpool a 3-2 victory. At least Dunne can say he slightly redeemed himself during his Premier League career, scoring at the right end of the field on 13 occasions.

Which is more than can be said for Jamie Carragher who in 508 Premier League games for Liverpool would score three times, the same number as he scored for Tottenham Hotspur in the competition thanks to proficiency at the wrong end of the field.

His first own goal came against Spurs at the tender age of 20 years and 311 days old, making him the youngest scorer on this list but not overall in Premier League history. Martin Cranie holds that honour, netting ON HIS DEBUT for Southampton against Chelsea in January 2004, aged 17 years and 218 days old – the only ‘child’ to score an own goal in the competition.

And whilst his efforts for Spurs are the equal-most a player has scored against his own team in the Premier League (along with Richard Rufus who West Ham fans would have no doubt been delighted to see line-up against them), perhaps Carragher’s greatest moment came against Manchester United on 11 September 1999 where he twice netted in front of the Kop in a 3-2 defeat for the Reds against their greatest rivals.

In just the third minute of the game, Carragher produced a wonderful headed finish from midfielder Ryan Giggs’ cross that left Sander Westerveld stranded for the game’s opening goal. The Liverpool centre-half was much less fortunate on the stroke of half-time: a bouncing ball around the box from a David Beckham free-kick, initially coming off Henning Berg’s head into Rigoberto Song’s leg before cannoning from a sprawling Carragher into the net for what would prove to be the decisive goal in the Red Devils victory. These efforts are just two of the Premier League record 62 own goals that Anfield has seen, just ahead of Old Trafford (59) and Stamford Bridge (53).

And whilst Carragher was the first to net two own goals in a single game, he certainly isn’t the last. Michael Proctor did the same for Sunderland against Charlton in 2003 before Stoke City’s Jonathan Walters matched their feat in 2013 against Chelsea. The most recent instance of a player scoring two own goals in the same Premier League match was the unfortunate Wout Faes, when the Leicester City defender scored both goals for Liverpool at Anfield in their 2-1 victory on 30 December 2022.

What is it with Liverpool players? Whilst it may have taken Carragher over 12 years to accumulate his total, Martin Skrtel was able to net his seven own goals over a five-year period and set the Premier League record for most in a single season during the 2013-14 campaign probably leaving Brendan Rodgers tearing his hair out after turning into his own net on four occasions (a record that has since been equaled by Lewis Dunk for Brighton during the 2017-18 Premier League season).

Thankfully for the Slovakian, those goals didn’t have too much of a negative effect on Liverpool’s results as the Reds were able to win three of the four games in which he scored for the opposition, including a dramatic 4-3 victory over Swansea in which the defender also gave away a penalty.

And those weren’t the only own goals that Skrtel would score during the 2013-14 campaign although he was extremely unfortunate to find international teammate Jan Mucha having the ultimate in brainfarts in the only goal of a 1-0 defeat to Greece. It’s one that makes Peter Encklemann slightly relieved following his effort against Birmingham City.

It’s a goalkeeper who holds the record for being the oldest player to score an own goal in the Premier League with Shay Given finding himself on the end of an unfortunate set of circumstances. At the age of 40 years and 129 days, the Stoke City shot stopper made a fine save from Everton’s Leighton Baines penalty, tipping the ball onto the post – only to see it rebound back onto his head and into the goal.

Despite his best efforts, Phil Jagielka’s strike for Sheffield United against Leeds United on 3 April 2021 still meant he couldn’t claim the crown of being the oldest outfield player to score an own goal in the Premier League, with Stuart Pearce topping him by just 23 days.

The first of Jagielka’s seven strikes came just over 14 years previously, once again for the Blades, for whom he’d netted three times overall before taking his ability in front of goal to Everton. There really must be something in the water up on Merseyside. But perhaps his finest moment on a Premier League pitch came just a week after scoring the second of his own goals. With Paddy Kenny injured, and no substitute goalkeeper on the bench, Jagielka took over between the sticks and kept an Arsenal side featuring the likes of striker Robin Van Persie at bay as Sheffield United held on for a 1-0 win at Bramall Lane, their first victory over the Gunners in 33 years.

Perhaps it shouldn’t be too much of a surprise that the uncompromising Ryan Shawcross find himself on this list.

A stalwart of Stoke City’s defence during their 10-year run in the Premier League, he would turn into the back of his own net on six occasions but became somewhat of a fantasy darling during his 401 top-flight appearances for the Potters, during which he would score 25 times…at the right end.

International recognition came via a solitary appearance for England as a substitute in October 2012, but those 16 minutes saw Zlatan Ibrahimovic score a hat-trick, including a spectacular overhead kick. Shawcross was never seen again in a Three Lions jersey.

You make a name for yourself as a quality defender, winning five Premier League titles and two UEFA Champions League trophies.

You transfer from your hometown club, the only team you have ever known, and line up against them back at the ground you used to call home. You even form part of a guard of honour welcoming your former manager to the pitch.

You’re nervous. You don’t want to make a mistake. You’ve got through the opening 45 minutes unscathed. Just one last corner to deal with – surely nothing can go wrong from here.

The trouble is – your name is Wes Brown. It’s 5 November 2011. You’re playing for Sunderland against Man Utd. And you score the only goal of the game at Old Trafford, the fourth of six own goals you score in your Premier League career.

The original Premier League king for own goals. For many years Frank Sinclair was ridiculed for the number he scored whilst playing for Chelsea and Leicester City but his total of six, these days, leaves him well off the modern-day pacesetters. But someone had to walk for others to run and the former Blues and Foxes centre-half was our original hero. Thankfully, Sinclair saved his best until the end. Any time the match day broadcast doesn’t capture the full moment of a goal, you know the replays are going to be special. Especially once Sinclair and Ian Walker had finished their long-distance brooding over each other.

There’s still hope that Jonny Evans might be able to challenge Dunne’s record at the top of the charts as the only active Premier League player in this list. But at least he has, so far, been able to spare himself the embarrassment of scoring an own goal and getting a red card in the same game.

Current England manager Gareth Southgate was the first to achieve that honour when playing for Aston Villa back in September 1999 against Leicester City, which was in many ways bettered by Jan Bednarek in that 9-0 defeat for Southampton against Manchester United in 2021, where he also managed to concede a penalty – in some ways, the connoisseur’s choice of disastrous games.

Jamie Carragher and Martin Skrtel might not have landed the overall prize for most own goals in the Premier League but they at least can take heart that they’ve both scored the most for an individual club, at least for now.

Lewis Dunk’s six so far in a Brighton and Hove Albion shirt means he’s fast closing in on the pair and the Seagulls captain seems to have taken a leaf out of one of their books in achieving his tally so far. Two of his own goals came against Manchester United, although in separate games, making him one of three players to do so alongside Steve Watson and Anton Ferdinand. All eyes on 18 March for if Dunk can make it three!