Manchester United vs. Manchester City: Prediction and Preview | The Analyst 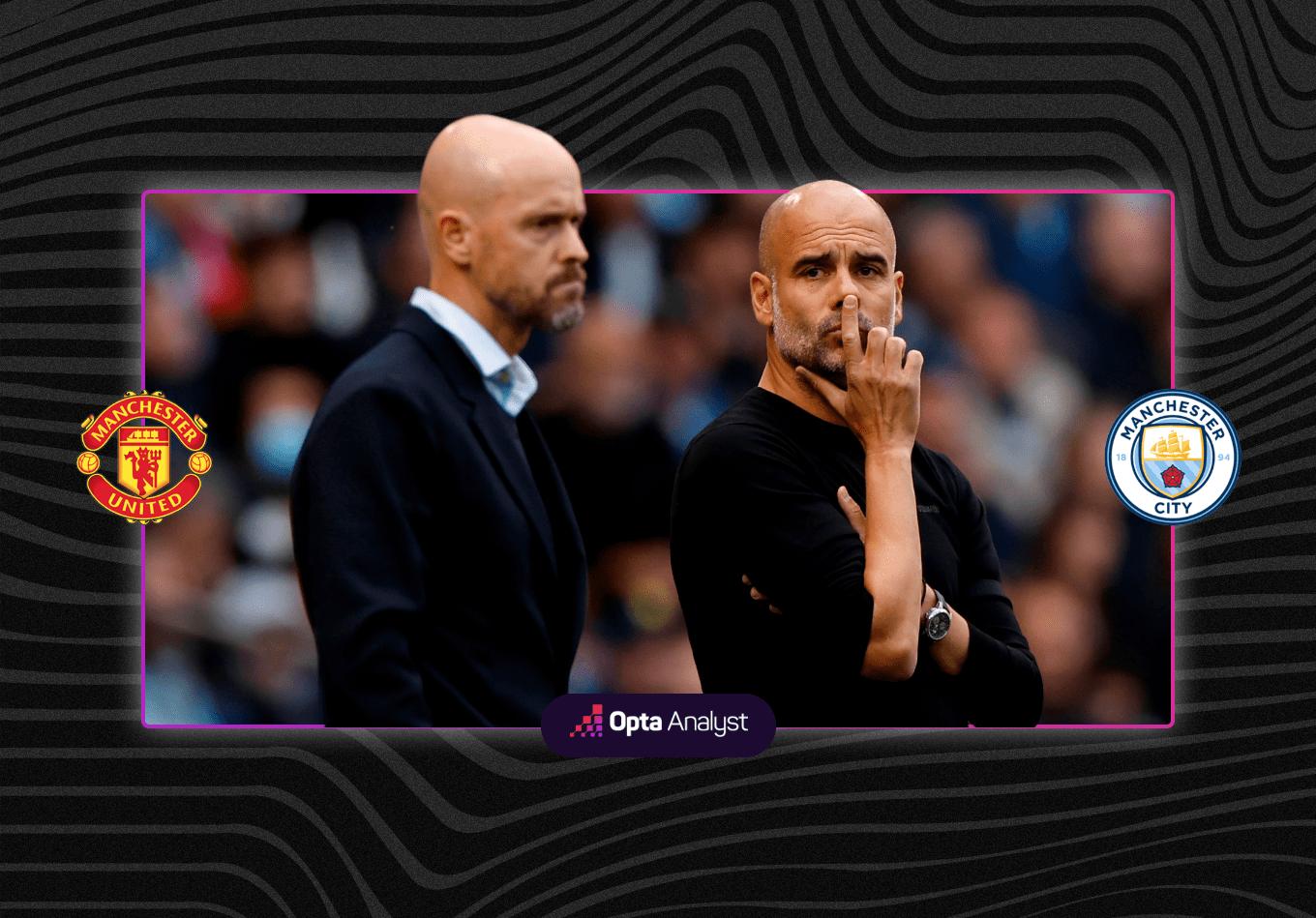 We preview the Premier League clash between Manchester United and Manchester City, including our pre-match prediction for this Manchester derby on Saturday at Old Trafford.

The 188th competitive Manchester derby will take place at Old Trafford in the Premier League on Saturday, with Manchester City looking for a win to close the gap between them and league leaders Arsenal to just two points, before the Gunners face their own derby against Spurs on Sunday.

The omens look good for Man City, with no side defeating Man Utd more often in the Premier League at Old Trafford than they have (eight wins), while a victory in this game for Pep Guardiola’s side will see them defeat United for a record 19th time in the competition since it began in 1992, overtaking both Chelsea and Liverpool’s records of 18 wins versus the Red Devils.

Man Utd’s recent head-to-head record against City is terrible, with three successive defeats in the Premier League in which they’ve conceded 12 goals in total – the same tally of goals conceded as in their previous 12 meetings with City combined. If they lose this game, it’ll be the first time since November 2014 that they have lost four successive Premier League Manchester derbies.

Erik ten Hag is looking to avoid becoming the first Man Utd manager to lose his first two matches against Manchester City since David Moyes in 2013-14, but his adversary Pep Guardiola has never defeated a Manchester United manager twice in the same league season – both of his previous league doubles came against two different United coaches: versus José Mourinho and Ole Gunnar Solskjaer in 2018-19 and versus Solskjaer and Ralf Rangnick in 2021-22.

This match will bring up a significant milestone for Guardiola, with it being his 500th top-flight league game as a manager.

This Manchester derby will be his 246th game in the Premier League with Man City, adding to 152 with Barcelona in La Liga and 102 in the Bundesliga with Bayern Munich. To date, Guardiola has won 379 of his 499 top-flight league games as a manager (76%), with this being both the most wins and the best win ratio of any manager to take charge of at least 100 games across the big five European leagues since his first campaign in 2008-09 at Barca.

This was the first time that Manchester City scored six goals in a home game against Manchester United in all competitions, while the previous two instances of City scoring six versus United came away from home (6-1 in January 1926 and 6-1 in October 2011).

Quite ridiculously, this was the third successive Premier League home match that Erling Haaland had scored a hat-trick for Manchester City, becoming the first player to do this in the competition for any club.

Haaland wasn’t the only player to score a hat-trick in this derby, with City’s Phil Foden also helping himself to three goals in the 6-3 win. These two hat-tricks doubled the number of Man City trebles by players against Man Utd, after only previously scoring two of them via Francis Lee in December 1970 and Horace Barnes in October 1921.

Haaland and Foden’s hat-tricks saw Man City become just the third team to have two hat-trick scorers in the same Premier League match, after Arsenal vs. Southampton in May 2003 (Jermaine Pennant and Robert Pires) and Leicester City away at Southampton in their 9-0 win in October 2019 (Ayoze Pérez and Jamie Vardy).

Should City repeat their success in this match, it’ll be the sixth time that they have completed the home win/away win double in the Premier League against United. This would be a new record for the most Premier League ‘doubles’ over the Red Devils since the introduction of the competition in 1992, beating Liverpool’s tally of five, which they currently share.

With City scoring six goals in this previous Premier League meeting with United, they could possibly break some records with another three goals in this match. Should they score at least three in this fixture, they’d break their own club record of most league goals scored against Man Utd in a single season (currently eight in 1954-55 – 3-2 at home, 5-0 away), while they’d also equal the Premier League record for most goals scored in a single season against the Red Devils (nine), set by Liverpool in 2021-22.

Anthony Martial scored two of United’s goals in this 6-3 defeat after coming off the bench as a substitute. Overall he’s scored five goals against Man City in the Premier League, his joint-record tally against a single club in the competition.

Manchester United enter this derby in great form. Since and including their win over Liverpool on 22 August, no team has won more points in the Premier League than Manchester United (35). They have won 11 of their 15 games in this time (D2 L2), which is a drastic change of fortune considering they’d lost their four league games before this.

In all competitions, United are on an eight-match winning streak, which is their best run since January 2019 in Ole Gunnar Solskjaer’s first eight games in charge of the club (as caretaker, at that time). They haven’t won nine in a row since January 2017 under José Mourinho. The eight teams that United have defeated in this run – Aston Villa, Fulham, Burnley, Nottingham Forest, Wolves, Bournemouth, Everton and Charlton – aren’t quite of the calibre of Manchester City, however.

Erik ten Hag’s side have kept three consecutive clean sheets in the Premier League. The Red Devils haven’t kept four in a row since March 2021, but the last time that they kept four clean sheets and won every game was back in August 2017.

Ten Hag is on his second sequence of four successive Premier League wins as Manchester United boss, having also done so between August and September earlier this season. Ralf Rangnick never managed a four-game winning run in league competition as Man Utd boss, with their last winning run as long as this coming in April 2021 (five in a row) under Solskjær.

With 19 points from 21 available in their last seven Premier League matches at Old Trafford (W6 D1 L0), Man Utd enter this derby with their best home league form over a seven-game period since November 2017 (21/21 points).

Should Manchester City lose this match, they’ll already have equalled their tally of Premier League defeats from last season (three). They have dropped eight points in their last eight Premier League games (W5 D1 L2) – as many as they had given up in their previous 16 league matches before this run (W13 D3 L0).

Man Utd have scored in each of their last eight league matches, which is the best current run of any team in the 2022-23 Premier League. They last failed to score in their 0-0 draw at home to Newcastle United on 16 October and have since scored 14 times in their eight league games, while conceding just five.

The early Saturday lunchtime kick-off slot (12.30pm GMT) often springs surprise results, and Manchester City’s last such fixture was no different. Before the 2022 World Cup, they suffered a shock 2-1 home defeat to Brentford thanks to an Ivan Toney brace on the early Saturday timeslot, but before this game they did win their last nine consecutive 12:30pm Saturday fixtures.

This will be United’s third match in this specific timeslot on a matchday this season in the Premier League – the previous two have ended with 1-0 wins, against Southampton and Wolves respectively.

Marcus Rashford poses the greatest threat to Manchester City’s backline in this derby. He’s scored in each of his last six competitive appearances for Man Utd (seven goals – three in the Premier League, one in the FA Cup and three in the League Cup – including a brace in midweek versus Charlton Athletic), which is already his best-ever scoring run for United in all competitions. The is the first time that Rashford’s scored as many as seven goals over a six-game period for United in all competitions.

The 25-year-old is averaging a career-best 123 minutes per goal in all competitions for Man Utd this season, while only in his first-ever season as a professional (22.2% in 2015-16) has he converted a higher proportion of his shots than in 2022-23 so far (21.4%). His 20 goal involvements (15 goals, five assists) are the most at Man Utd this season in all competitions, ahead of Christian Eriksen (10), Bruno Fernandes (seven) and Martial (seven).

Rashford has scored in his last three Premier League appearances for Manchester United and is looking to score in four in a row for the first time since January 2019. However, he hasn’t scored in any of his last five appearances against Man City in the competition, managing just one shot on target in these games.

Picking Erling Haaland feels like the easy option here, but how can you ignore a man that’s already scored 27 goals in 23 competitive appearances for Manchester City this season. This tally is seven more than any other player playing for a team within the top five European leagues, with the next best being PSG’s Kylian Mbappé.

Haaland’s scored 21 of his goals in the Premier League, despite making just 16 appearances. He’s only failed to score in four of these appearances, while he’s averaged a goal every 62 minutes in the competition so far. Of all players to have scored 20 goals in Premier League history, the next-best in the all-time ranking for minutes-per-goal is Sergio Agüero on 108 minutes – a full 46 minutes more than Haaland.

Haaland’s feats have given him a serious chance of breaking both the Premier League scoring record in a single season (34 goals) and the 44-goal record for a Premier League player across all competitions in a season, currently held by both Ruud van Nistelrooy (Man Utd) in 2002-03 and Mohamed Salah (Liverpool) in 2017-18.

The 6-3 win over United in October saw the striker give Man Utd defenders Lisandro Martínez and Raphaël Varane a torrid afternoon, with captain Harry Maguire out injured. It’s unlikely that the England international will be back in the starting lineup for this game, either, with Maguire out of favour at United.

Haaland would be dangerous without the creative strength that City have behind him on the pitch, but when he’s being provided chances by players like Kevin De Bruyne, he’s all the more potent. The Belgian is the leading assist maker (nine) and chance creator (59) in the Premier League in 2022-23 so far.

Our predictor certainly fancies derby-day joy for Manchester City in this match. The supercomputer is making Man City favourites, giving them a 54.3% chance of defeating United at Old Trafford for the ninth time in the Premier League and a record-breaking 19th time at any venue in the competition.

A draw (25.5%) is being deemed more likely than a Man United home victory (20.2%), with the supercomputer thinking that the Red Devils’ three-game winning league run is coming to an end on Saturday lunchtime.

Across the Premier League matchday, only Leicester City (54.5% at Nottingham Forest) have been given a bigger chance of picking up an away win this weekend than Man City. That’s a big call.

Overall, the supercomputer is still big on a Manchester City title win in the Premier League this season (72.3%), with past glories – City have won four of the last five English top-flight titles – giving Guardiola’s side the edge.

For Manchester United, the supercomputer predictions still give them a strong chance of finishing in the top four of the league table and qualifying for the UEFA Champions League (68.15%), which is the third highest chance behind City (99.91%) and Arsenal (98.86) and just ahead of Liverpool (60.57%), Newcastle United (37.49%) and Spurs (24.89%).