The Lowest Points Totals in Premier League History | The Analyst 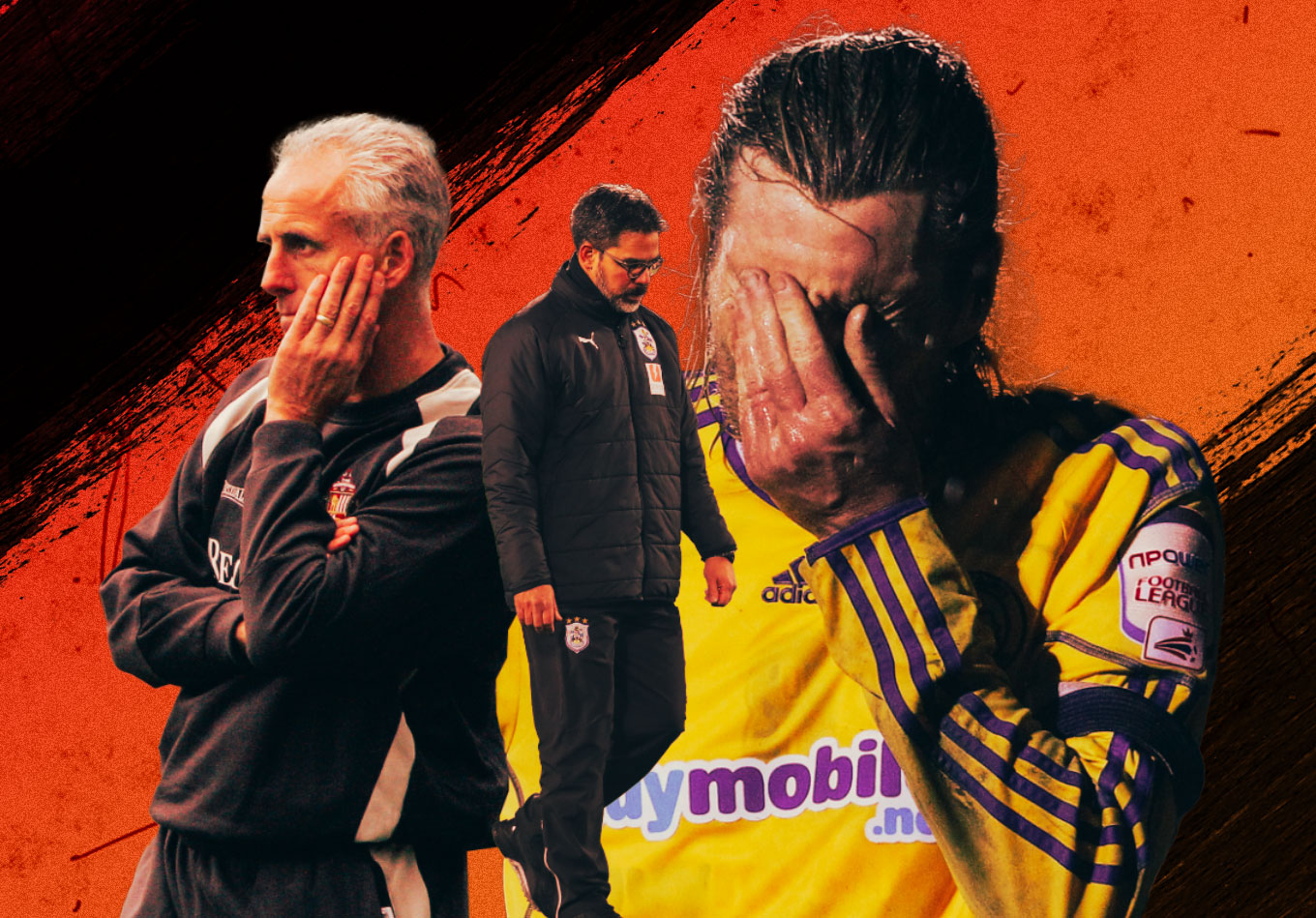 No one likes to see football seasons decided in back offices and on fax machines but Portsmouth’s departure from the Premier League in 2010 became inevitable once they were handed a nine-point penalty in March after going into administration. It was the initial culmination of a few seasons of economic madness that gave the club the sugary highs of an FA Cup win in 2008 and a 2-2 draw with the famous AC Milan under the tactical tutelage of Tony Adams, but would end with the club falling all the way down to the fourth tier within three years. Portsmouth’s actual results on the field in 2009-10 should have seen them collect 27 points, which would still have seen them finish bottom but doesn’t really mean they should be compared with the other teams in this article. We’re interested in wild mismanagement, yes, but mismanagement on the pitch.

Sunderland’s Premier League existence in the 2000s is hard to grasp sometimes, slippery like a cold fish. Unlike other legendarily bad sides, Sunderland are about to feature twice in this list, like two distinct courses at a spectacularly bad restaurant. The first plate is the 2002-03 season, aka The One With Howard Wilkinson. Sunderland started this campaign managed by Peter Reid, who had not only brought the club up to the top flight of English football in 1999 but had guided them to seventh place finishes in both 1999-2000 and 2000-01. With a gleaming new stadium and Kevin Phillips in his pomp, the club’s future at the top table looked secure, but 2001-02 saw the team spiral from a place in the top 10 at Christmas to 17th by the end of the campaign. It meant that once 2002-03 started similarly inconsistently, Reid was on borrowed time and was sacked in October, during that most dangerous of times for managerial employment: the international break.

The club’s initial solution was to appoint former Leeds manager Howard Wilkinson, latterly employed by the FA as Technical Director. At the time, Wilkinson was the most recent English manager to win the English league title. Nearly 20 years later that is still true, which is a whole other discussion, but either way, it was soon clear that winning the top-flight in 1991-92 was no preparation for keeping Sunderland in the top-flight in 2002-03. They were relegated alongside West Ham and West Bromwich Albion.

I doubt many Black Cats fans shuffled out of the Stadium of Light on 11 January 2003 with much of a spring in their step, for they had just witnessed a fairly bleak 0-0 draw with Blackburn. What they didn’t know was that this was to be their team’s last point of the season. The 15 remaining games all ended in defeat, the last nine of them under yet another new manager, Mick McCarthy this time. The true nadir is hard to pinpoint but perhaps the 3-1 home defeat to Charlton in February is a good choice. Sunderland players scored all four goals in the game, that total of three own goals in a single match a Premier League record which has only been matched once since; by Sunderland again, versus Southampton in 2014.

At the time Premier League fans were astonished at how bad Sunderland’s 2002-03 had been, and wondered whether another team could ever collect fewer than 20 points in an entire season again. Oh, innocent people of 2003, prepare yourself for some distressing scenes.

Leicester City’s improbable triumph takes much of the attention away from Aston Villa’s disastrous 2015-16 campaign. But we haven’t forgotten, oh no.

Some things aren’t in the post, like Aston Villa becoming champions of Europe in 1982, but some things are in the post, like Aston Villa’s relegation from the Premier League in 2016. The result of an inexorable decline from the days of finishing sixth for three successive seasons in the late 2000s, Villa had finished 17th in 2014-15 and as with a lot of these teams in deep deep trouble, had started to go through managers at a rapid rate. They kicked off 2015-16 with Tim Sherwood in charge, but replaced him with quiet man Remi Garde in November, although he only lasted until March when Eric Black took over for the remainder of the campaign. The side ended up with just 17 points and even went two games without winning a single corner in February. A Premier League ever-present up until that point, it took Villa three seasons of convalescence in the second tier before they returned in 2019.

Like a doomed holiday romance, Huddersfield Town’s spell in the Premier League should probably have been limited to a single season, and extending it to two only made everyone involved deeply unhappy. The Yorkshire side’s promotion to the top-flight in 2017 alongside Newcastle United and Brighton was surprising enough, especially once you knew that they hadn’t ended a season with a positive goal difference since being in the third tier back in 2011-12. And there was absolutely no chance they were going to score more than they conceded in the Premier League, something they proved in 2017-18 by scoring 28 goals in 38 games yet finishing 16th. It equalled a Premier League record for fewest goals by a non-relegated side, and you didn’t need to be some sort of futurologist to predict that a certain affliction called Second Season Syndrome was winging its way to Huddersfield.

And so it proved. 2018-19 saw Town collect just three wins all season (two of them against Wolves, meaning almost 40% of the Terriers’ points came against Wolves, thus ending the domestication of animals debate once and for all) and score only 22 goals. Had they not ended the season with a couple of glamour 1-1 draws against Manchester United and Southampton, Huddersfield would have ended the season with 14 points, but even so, 16 points in 2018-19 makes them the third-worst team in Premier League history. That feels both harsh and fair, the ultimate combination when it comes to relegation chat.

As we saw above, Sunderland plummeted out of the Premier League in 2002-03 on the back of 15 consecutive defeats, so it’s not staggering to learn that it took them two seasons in the Championship to sort themselves out and find their way back to the promised land. After racking up just four wins and 19 points in the infamous Reid/Wilkinson/McCarthy campaign how much worse could this one be? How about three wins and 15 points? Is that worse… it certainly sounds worse.

A quick five defeats on the spin to start the season extended Sunderland’s top-flight losing run to 20 games, an all-time English top-flight record that briefly looked in danger earlier this season when Norwich reached 16 successive defeats, also across two spells. Five points for Sunderland from three games just before the international break was great timing for Mick McCarthy but his team then delivered nine successive defeats to send every warning light in the north east haywire. Put it this way: were you a Sunderland fan morosely leaving The Valley on 10 December 2005, having just seen your side lose 2-0, and you had been to each of the club’s 32 previous Premier League games, you’d have seen one win, two draws and 29 defeats. That’s too much for a single human to take. It really is.

Sunderland won again in January against West Brom, and for the final time that season at home to Fulham, long after relegation had been confirmed and even longer after McCarthy had been replaced as manager. No Sunderland player that season scored more than three goals, while their total of 29 defeats was the first time that number had been reached in a 20-team division. I was not alone in that hot summer of 2006 by claiming that this was a definitive nadir for a club in the Premier League. 15 points was as low as you could go. Without a doubt. And yet…

There are few certainties in modern life but knowing that no team will ever beat Derby County’s 11-point Premier League campaign from 2007-08 is one of them. A season so bad that it can be used as an adjective, “oh wow, your season is going a bit Derby 07-08”, a campaign so awful that it will never be overtaken (undertaken?) by any other side. When Sheffield United started the 2020-21 Premier League season with two points from their first 17 games, some panic merchants wondered whether Derby’s record was under threat. But it is so hard to maintain such a level of professional depravity over 38 games. The Blades would end last season bottom of the division, but with 23 points all the same. More than twice a Derby, in other words.

Derby were promoted to the Premier League by beating WBA 1-0 in the 2007 playoff final. Amid the cheers and the delight, no-one quite realised what a poisoned chalice this victory would be, and even after the first game of 2007-08, a 2-2 draw with FA Cup winners Portsmouth, it was still possible that things might just be ok.

17 September 2007 was a Monday and it was the only date in either 2007 or 2008 that Derby County would win a Premier League game. At home to Newcastle, a Kenny Miller goal (which was missed by the live television cameras who were showing a replay at the time) separated the two teams, Derby climbed to 19th and then took two points from their next four games, with Miller scoring again, the striker’s second of the season. Six points from 10 matches. It’s not brilliant but it’s 23 points over the course of a whole season. Incidentally, Miller would go on to finish as Derby’s top scorer that year. Scored the most winning goals for them too.

Then everything got much, much worse.

By late November manager Billy Davies had left, replaced by Paul Jewell. The January transfer window saw a classically eclectic mid-2000s spree, with the likes of Danny Mills, Emanuel Villa, Laurent Robert, Robbie Savage, Hossam Ghaly, Roy Carroll and Alan Stubbs all signing up for certain doom. In all, 36 players featured for Derby in 2007-08. Only two sides, Middlesbrough in 2005-06 (37) and Fulham in 2013-14 (39) have ever used more in a single Premier League campaign.

A 2-2 draw at Newcastle just before Christmas ensured that they, alongside Fulham (two draws) would be the only side not to beat Derby this season. The second Fulham draw, 2-2 in late March, was the result that guaranteed (in case anyone post-October thought they had a chance) Derby’s demotion, which they celebrated by losing their final six games, a spell that saw them leak six goals to both Aston Villa and Arsenal. Emmanuel Adebayor scored hat-tricks in both of Arsenal’s games against Derby that season, another Premier League record.

So the Rams ended the season on a run of 32 Premier League games without a win, with Jewell having collected just five points from 24 games in charge, with a record low 20 goals, with a joint-record 29 defeats, a top-flight record low 11 points and a Premier League club record 89 goals conceded in a 38-game season. The club have not returned, though they have lost the Championship playoff final twice since 2008, in 2014 and 2019. After avoiding relegation to League One on the last day of the 2020-21 season, it looks like (Wayne Rooney managerial heroics aside) next season Derby will indeed be in the third tier, thanks to penalties worth 21 points being applied. And if 21 points sounds like a lot, just think how it sounds to anyone involved in Derby’s 2007-08 campaign. You might as well call it a million.

But every disastrous campaign but must have a beneficiary. And just as we’ve highlighted the lowest Premier League points totals in a single season here, we did the same for the highest such efforts in a campaign, featuring the likes of Liverpool, Chelsea, Man Utd and Manchester City.