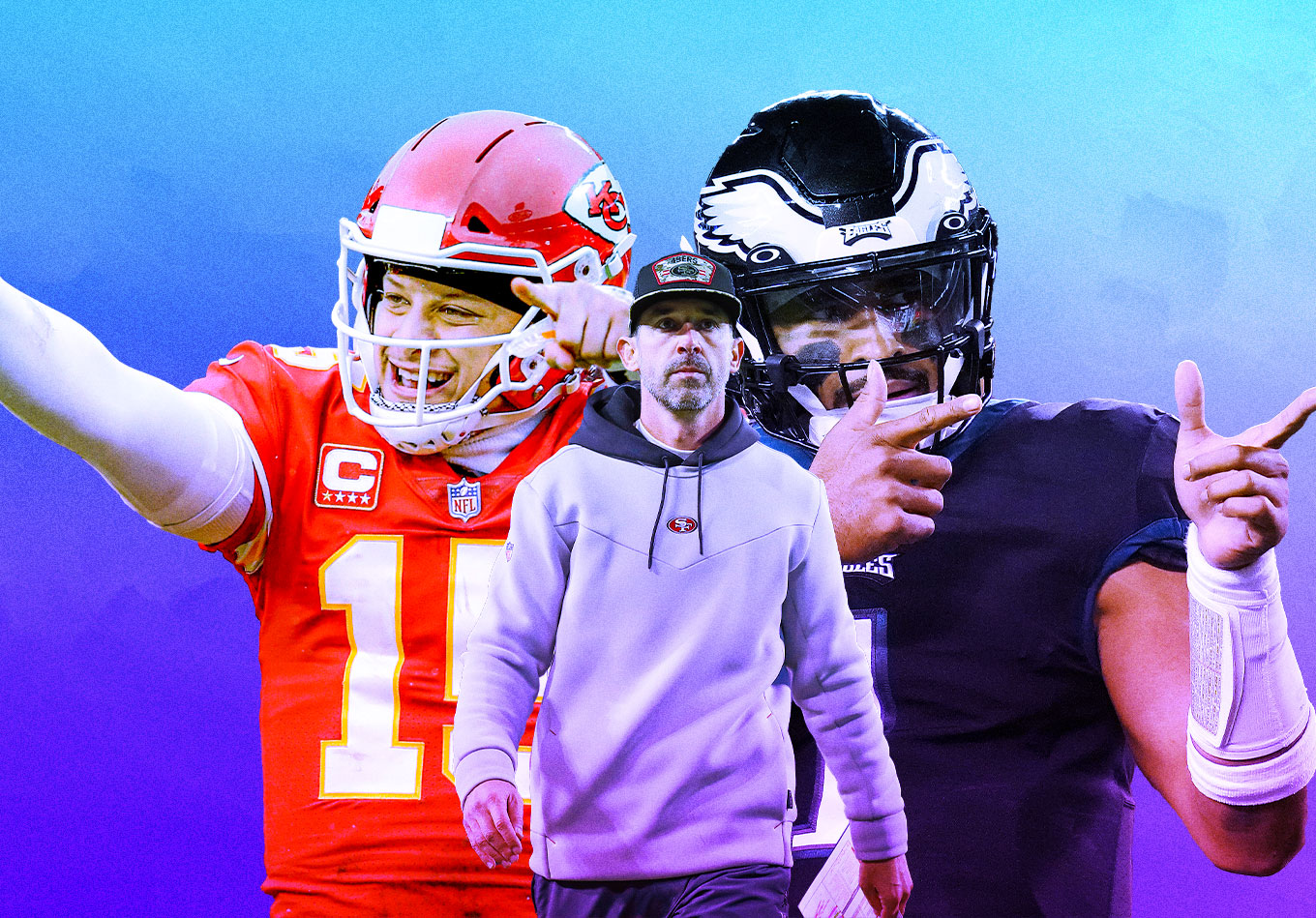 How much should Philadelphia Eagles play-callers be celebrated for Jalen Hurts’ emergence as an MVP candidate this season?

What about first-year coach Brian Daboll’s role in developing Daniel Jones into a playoff-winning quarterback for the New York Giants?

These types of thought-provoking questions have to do with the age-old question of how much a coach deserves credit for a player coming of age. Because of all the factors involved with such a relationship, it’s impossible to know for sure exactly how much of a role a coach might play in the success of a quarterback.

But by taking a closer look at some of the advanced analytics surrounding a team and its signal-caller, we can begin to see where a coach might end and where a QB showcases his ability to make a play. Our EVE model measures how many yards a team either gains or allows on average compared to what would be expected from the league-average team in a given situation.

How? We look at down, distance, yards from the goal line, quarter, time remaining, and score difference. And using those six factors, we’ve trained a model to predict yardage output for any game situation. From there, we compare the projected yards to the actual yards gained or prevented in those situations.

So if the projected yards for a play are 3.4 and the offense picks up six yards, that team would have added 2.6 yards more than the expected amount on that play. The uniqueness of this model is the ability to look at performance in situations when a certain play (pass or run) is expected.

Another differentiator in EVE is that it provides a more accurate reading of quarterback scrambles and where they fit in. We have the ability to call them passing plays instead of running plays, giving credit to someone like Hurts who might run for a first down on a designed pass on third-and-9.

We can also use EVE to examine how quarterbacks perform compared to what’s expected from the average QB in various situations. And one of the key areas we can study is passing performance in neutral situations and anticipated pass situations.

See, all passing situations are not created equal. For example, when the San Francisco 49ers were facing a second-and-3 or less during the regular season, they ran the ball 76.8% of the time. In fact, only four teams passed at a clip of greater than 50.0% in that scenario this season. That type of down and distance is one that we classify as an “expected rush.”

On the flip side, when teams were facing a third-and-7 or more, only two teams (the New York Jets and Chicago Bears) passed the ball at a clip of less than 75.0%. We classify those situations as an “expected pass” down and distance.

Finally, there are the aforementioned “neutral” situations. Think of a first-and-10 from the 50-yard line. The entire playbook would be open to an offensive coordinator and the defense would have to call a play in which both a pass or run are reasonable outcomes.

Why the distinction? Obviously, a quarterback and/or play-caller would have more of an advantage in these situations than third-and-longs when the defense knows a pass is coming. It’s easier to be a quarterback passing the ball on second-and-2 than it is when facing a third-and-12.

So which teams had the best passing offenses in neutral situations this season?

That would be the San Francisco 49ers, Miami Dolphins, Tennessee Titans, Washington Commanders and Jacksonville Jaguars, according to our data. The inclusion of the Dolphins, 49ers and Jaguars makes sense considering Mike McDaniel, Kyle Shanahan and Doug Pederson are highly regarded offensive minds.

Tennessee is looking for a new offensive coordinator, though Todd Downing was arrested for a DUI in November and didn’t have QB Ryan Tannehill for five games. Scott Turner may have deserved a better fate than failing to survive the Carson Wentz-Taylor Heinecke fiasco in Washington.

Wait, the Titans and Commanders are ranked higher than the Kansas City Chiefs? Yes, believe it or not, they averaged slightly more passing yards over the expected amount in neutral situations than Kansas City, which is ninth (0.44). Part of this might be because teams are more apt to play the run against them in neutral situations than they would the Chiefs. And that changes drastically when it comes down to passing in expected passing situations (more on this later).

What does that mean? It means that the San Francisco offense, led by Shanahan, is extremely well structured and schemed, ultimately having great success in situations in which the defense is unsure whether a pass or run might be coming.

And critically, it helps explain some of the wild success that Brock Purdy has experienced since becoming quarterback. Because, yes, while he has been exceeding everyone’s wildest expectations, he has been greatly helped by a dynamic group of weapons and a play-caller and scheme that puts him in the most advantageous positions possible.

How about the other side of that analysis? Which offenses perform the worst even though the defense doesn’t know whether they’re going to run or pass? The Carolina Panthers (minus-2.42), Denver Broncos (-1.67), Pittsburgh Steelers (-1.47) and Arizona Cardinals (-1.44) round out the bottom four.

OK, so let’s get into the situations that really matter down the stretch in big games. And that’s quarterback performance when the defense expects a pass. Envision those key third-and-long situations or high-pressured, two-minute offenses when the team needs to come through with a big score.

Sure, even those plays could be schemed to a degree. Better play-callers might have better plays lined up in those situations, but the reality is that these are the moments when QBs earn their money and the coaches need their guys to step up and make plays.

It’s probably no surprise that it’s Patrick Mahomes and the Chiefs (1.85), Josh Allen and the Buffalo Bills (1.66) and Hurts and the Eagles (1.06) at the top. The Chiefs, Bills and Eagles are the only three teams averaging over 1.0 passing yards over expected and only eight teams in the entire league are averaging positive yards over expected in these spots. Mahomes, Allen and Hurts are all NFL MVP finalists, and it says a lot about their ability to find a way to get a first down outside of the scheme or comforts of the play-calling direction.

The Chiefs and Bills were first and second in the NFL, respectively, in converting third downs with 10 or more yards to go during the regular season. They were also the only two teams in the league converting at least 30.0% of those attempts and have two of the largest positive differentials between passing performance in neutral situations and expected passing situations in the league, including the playoffs.

Mahomes, Allen and Hurts are fantastic quarterbacks and nowhere does that show up more than when the defense knows they’re going to drop back to pass and still can’t do anything about it.

On the other hand, the worst passing offenses in expected passing situations belong to some of the worst offenses overall: the Los Angeles Rams (-1.41), previously mentioned Titans (-1.34), Cardinals (-1.03), Cleveland Browns (-0.87) and Houston Texans (-0.87).

Tennessee has the largest negative differential between passing performance on neutral situations and passing situations, while San Francisco is No. 1 in neutral spots and eighth when the defense knows a pass is coming.

Purdy has skyrocketed up the QB EVE rankings in recent weeks. Without a large sample size to go on, Mr. Irrelevant from this year’s draft finds himself fifth in the NFL among those with 150 plays in expected passing situations.

But facing a Dallas team that was eighth in pass defense EVE this season, Purdy completed 19 of 29 passes for 214 yards with no scores. It was the first time in seven starts that he didn’t have at least two TDs.

If Shanahan can keep Purdy in pass-friendly situations, they’ll have a much better chance of upsetting the favored Eagles. But if they get into drop-back situations against a Philadelphia team that’s third in both defensive EVE against the pass and team pressure rate heading into the NFC championship game, the 49ers will likely have trouble moving the ball.