FCS National Awards: A List of the All-Time Recipients | The Analyst 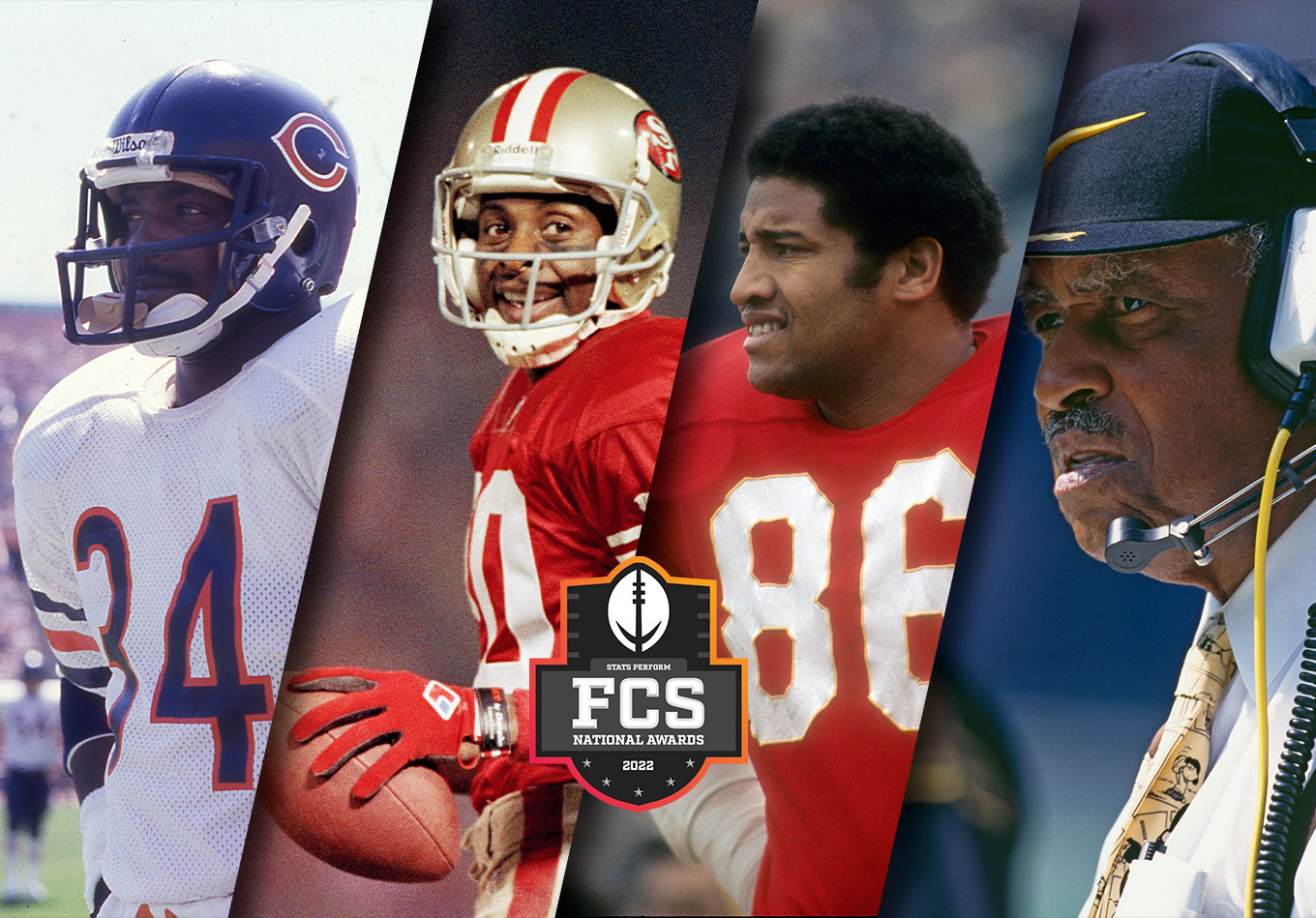 The FCS National Awards honor the best of the best in the NCAA Division I subdivision of college football.

The namesakes of the national awards are legendary. Starting with the Walter Payton and the Eddie Robinson in 1987, the awards have grown to include the Buck Buchanan and Jerry Rice awards and the FedEx Ground Doris Robinson Scholar-Athlete of the Year Award.

All five awards are presented at the Stats Perform FCS National Awards Banquet, held annually in early January prior to the FCS championship game in Frisco, Texas.

Walter Payton set NCAA records at Jackson State before going on to set the NFL career rushing record with 16,726 yards (later bested by Emmitt Smith) and score 750 points in his career. Payton was a two-time NFL MVP, a Super Bowl XX champion and a nine-time Pro Bowl selection with the Chicago Bears. The NFL’s Man of the Year is named after him.

“When you look at my dad’s career from high school to college and what he had to do to be able to get to the NFL, and to see these young guys coming up now as finalists for this award is pretty special,” said Jarrett Payton, a long-time presenter of the Walter Payton Award.

Junious “Buck” Buchanan, who starred at Grambling State and then with the Kansas City Chiefs, was the prototype for future defensive linemen, combining size, speed and outstanding strength, along with an intense work ethic. His teams won two AFL championships and Super Bowl IV. Buchanan had a streak of eight straight selections to either the AFL All-Star Team or the NFL Pro Bowl, and missed only one game due to injury in his 13-year career.

“You’re getting recognized for the work that you put out there on the field. Just to be able to be a representative of the award, to have my name entrenched and always associated with the Buck Buchanan Award, it’s amazing,” said Dexter Coakley, the only two-time recipient (1995 and ’96) and a frequent presenter.

Jerry Rice went from being one of the all-time greatest wide receivers in FCS history at Mississippi Valley State to the unquestioned best in NFL history. In a career spent mostly with the San Francisco 49ers, he won three Super Bowls and was a 13-time Pro Bowl selection. His many records include NFL career marks for receptions (1,549), receiving yards (22,895), touchdown receptions (197) and touchdowns scored (208).

“I am truly honored to be a part of the FCS Awards and to be in the company of Walter Payton, Buck Buchanan and Eddie Robinson. It truly means the world to me and it’s unbelievable to be able to have my legacy live on forever,” Rice said.

The late Eddie Robinson’s 408 career victories at Grambling State are the most among FCS schools and only one less than Joe Paterno’s Division I-record total at Penn State. Coach Rob’s teams won nine black college football national championships, and more than 200 of his players went on to NFL careers.

“When the names Walter Payton, Buck Buchanan, Jerry Rice and Eddie Robinson are attached to top awards, the message is clear to all involved: ‘You can be anything you dream of as a product of FCS football,’ ” said Jim Tressel, the 1994 Eddie Robinson Award recipient and a four-time FCS national championship-winning coach.

Doris Robinson, the late wife of legendary Grambling State football coach Eddie Robinson, was a school teacher who spent her life dedicated to educating young people. Her award honors an FCS student-athlete who excels not only in the classroom, but in the community and beyond.

“My grandmother, Doris Robinson, embodied the essence of laboring in love for all humanitarian endeavors that strengthens the wisdom of communities when they are tasked with molding our future through our young people. This award is a perfect parallel to her lifelong commitment to our well-rounded leaders who recognize and strive for distinction through sports, education and the growth of community pursuits that uplift each one of us as citizens of the world,” said Eddie Robinson III, grandson of Eddie and Doris Robinson.

(Another Look: Here’s the Full List of FCS National Awards Winners by School)