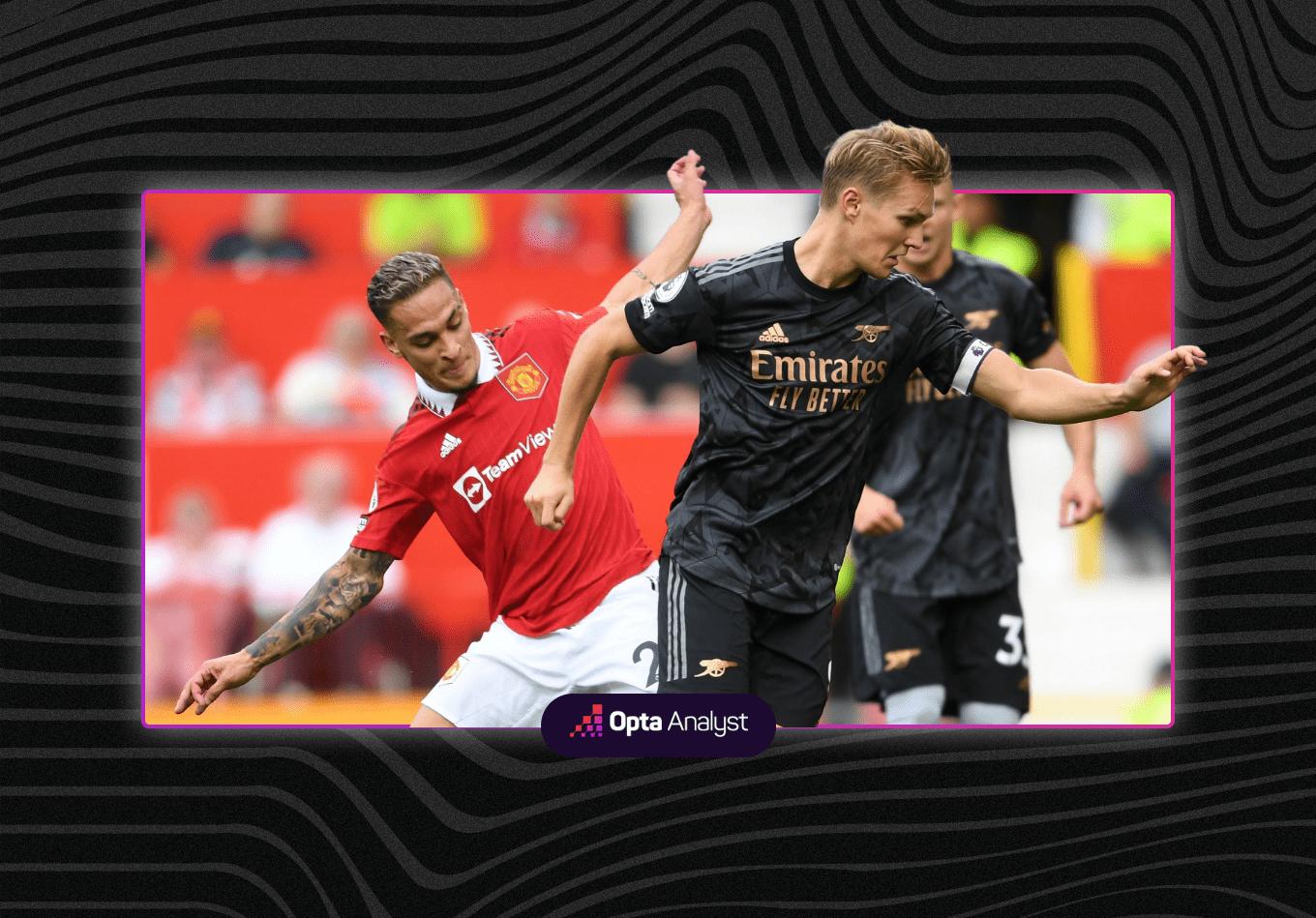 We preview the Premier League clash between Arsenal and Manchester United, including our pre-match prediction for this top-of-the-table clash between two old rivals at the Emirates Stadium.

And that can only mean one thing: we’re getting ready for ‘Our League ™’ to throw up a classic clash between two of the Premier League’s old guard.

Michael Olise’s stunning free kick on the cusp of full-time put an end to Manchester United’s nine-game winning run in all competitions on Wednesday night as Crystal Palace salvaged a 1-1 draw late on. But Erik ten Hag’s side will still come into this game high on confidence. The fact remains that United have lost just once in their last 20 matches in all competitions (W16 D3 L1), and their statement victory last weekend against Manchester City felt like a true momentum swing.

For Arsenal, things are looking rosy right now. A potentially season-defining win in the north London derby took them eight points clear at the top. It was a hugely significant victory as for the first time this season Arsenal are now favourites to win the Premier League title in both Opta’s predictor model and with the bookmakers. Despite Manchester City closing the gap to five points after beating Spurs last night, the model still has Arsenal as favourites. According to the supercomputer, the probability of the Gunners going on to clinch their first title since 2003-04 is now 51.3%.

The Gunners’ 47 points from 18 Premier League games this season is the most points they’ve won at this stage of a campaign in their league history. On only four different occasions have Premier League sides collected more points than this in their first 18 league games of a season.

Arsenal are yet to concede a goal in 2023, drawing 0-0 with Newcastle, before securing wins against Oxford in the FA Cup (3-0) and Tottenham (2-0). In only three calendar years have the Gunners kept clean sheets in their four competitive matches, doing so in 1935, 1994 and 2021.

Both sides have fared excellently against their fellow ‘big six’ rivals (and Newcastle, who arguably have a bigger claim on the ‘big six’ moniker than Chelsea, Spurs and Liverpool at this moment in time).

Manchester United have picked up 14 points from their seven games against these sides, while Arsenal have 13 from six. Those are comfortably the best records in this mini-league.

While Sunday is a day of rest for some around the world, it’s traditionally been when Arsenal and Manchester United go to work.

This encounter will be the 29th Premier League meeting between the pair on a Sunday, with only Chelsea vs. Liverpool (32) and Liverpool vs. Man Utd (31) taking place more often on that day of the week.

What’s more, the game will also be played at the hallowed 16:30 GMT time slot – the one you want for goals and drama.

As the research below shows, the late afternoon slot on a Sunday has the highest xG and the second-highest goals per game of any time slot in the Premier League since 2016-17.

It also dominates the penalty standings and ranks well for red cards, too.

Glamour can result in clamour for spot-kicks and flashes of red, and referees are usually willing to oblige. We should be in for a treat.

The last time that these two sides met was in the reverse league fixture at Old Trafford. In what was Erik ten Hag and Mikel Arteta’s only match against each other to date, the home side ran out 3-1 winners.

Bukayo Saka drew Arsenal level, but two goals from Marcus Rashford put the gloss on a great day for the Red Devils.

Arsenal came into the game top of the league table having won their first five matches. Twelve games later and this defeat remains their only loss of the season. In fact, this Sunday will be the first time in Premier League history that Arsenal come into both league meetings against Manchester United within a single season sitting top of the table.

As for United, they’ll be looking to complete only their second league double over Arsenal since Sir Alex Ferguson retired in 2013, doing so since then only in 2017-18 under José Mourinho.

With teams now striving to eke out the most marginal of gains, teams’ performances at set pieces have become a heavily scrutinised part of the game. It’s now commonplace for teams to employ set-piece coaches and to work specifically on their attacking and defensive routines.

It seems that like a frontier that United are still trying to crack, however. The Red Devils have generated just 39 shots from set-piece situations, fewer than anyone else in the league. Those shots have accumulated in 3.8 xG overall, which is the fourth-lowest total in the division, and they’ve converted those into just two goals -o team has scored fewer.

On the flip side, set pieces are an area of Arsenal’s game that’s significantly improved since Arteta took over. Nicolas Jover – formerly of Brentford (of course) and Manchester City – has made a real impact on Arsenal’s dead-ball potency going forwards, and their solidity defending them. The Gunners have conceded just one goal from such situations all season (the joint-best record in the league), and given up just 3.4 xG in total, the third-lowest mark in the division.

United A Threat in Transition

But one area of the game that will scare Arsenal fans is Manchester United’s threat in transitions. Particularly with the pace of Marcus Rashford, Anthony Martial or Alejandro Garnacho being fed by players with the passing range of Bruno Fernandes or Christian Eriksen.

In United’s 3-1 win earlier in the season, both of Rashford’s goals came through direct, quick counter-attacks. The striker raced onto a through ball from Fernandes for his first, before Eriksen did the same 10 minutes later, squaring the ball for the Englishman to tap in. On both occasions, United were able to exploit space in behind Arsenal’s high defensive line.

This is something this United team are set up excellently to do. They lead the league in direct attacks, defined as the number of open-play sequences that start just inside their own half, have at least 50% of movement towards the opposition’s goal and end in a shot or a touch in the opposition box. These can be viewed as proxies for counter-attacks and United’s total of 46 are eight more than anyone else in the league (Spurs: 38).

Arsenal will likely try and dominate the ball and United will be happy to absorb pressure before springing forward on the counter. They could look to attack the space in behind Arsenal’s full-backs, with that area of the pitch the only zone in Arsenal’s own half that they don’t dominate in terms of controlling possession.

Look For a Fast Arsenal Start

In their two most recent Premier League games, against Newcastle and Tottenham Hotspur, Arsenal surged out of the blocks. The Gunners had five shots worth 0.55 xG inside the opening seven minutes against Newcastle and would have been disappointed not to be ahead. It was the same story against Spurs, where a Hugo Lloris own goal and a Martin Ødegaard strike gave them a deserved 2-0 lead at half-time in the North London derby

Starting fast has been a theme for Arsenal all season. They’ve scored the joint most goals in the opening 30 minutes of Premier League matches this season (12, along with Brighton), and have conceded just once in the opening half-hour of games (level with Newcastle).

They’ve also scored a league-high 12 goals in the 15 minutes after half time, so there’s evidently something special in Arteta’s eccentric team talks.

Erik ten Hag has done a fantastic job at changing the tide at Manchester United. Let’s not forget that last season was United’s worst-ever Premier League points tally, as they finished sixth on just 58 points.

Since Ten Hag’s first win on Matchday 3, only Arsenal have picked up more points that the Red Devils in the league (41 vs. 39).

Sunday’s fixture pitches the two most in-form sides against each other.

Arsenal skipper Martin Ødegaard has always been a silky midfield operator. But this season, he’s really increased his end product. With 13 goals and eight assists, he has already surpassed last season’s tallies for both goal involvements (13) and goals (eight) in all competitions.

He’s become Arsenal’s do-it-all man from midfield. Not only does he average 2.6 shots per 90 from open play (the second-most on their team) and 1.8 chances created from open play (third most) – enough to put him in the 94th percentile across the league in those two categories combined – he also leads all Arsenal players for possession won in the final third (1.3 per 90).

As the below map shows, the Norwegian operates all across midfield but is particularly active in zone 14 – the area just outside the opposition’s box.

Arsenal’s equaliser in the reverse meeting came from him picking up the ball in between the lines and threading a pass through to Gabriel Jesus, which rebounded and fell to Saka.

Casemiro and Fred did an excellent job clogging up the midfield against Man City, preventing City’s playmakers from receiving the ball in behind them. But Fred will need to do that without Casemiro this weekend…

Casemiro’s suspension is a huge blow for Man United. The Brazilian has made a huge impact at Old Trafford since his arrival, extinguishing fires all across the pitch, while adding some much-needed steel to the base of United’s midfield.

Since his first Premier League start (9 October vs. Everton) among all midfielders in the competition, Casemiro ranks second for tackles (49), joint-third for interceptions (17), third for possession won (94), second for duels won (92) and first for clearances (32). His disrupted force in the middle of the park will be sorely missed and could allow Ødegaard and Granit Xhaka to cause mischief in midfield.

Fred might be joined by Scott McTominay in United’s double pivot, and how they go about trying to stymy Arsenal’s progression of the ball will be a key battle to watch.

Our supercomputer predicts Arsenal to end Manchester United’s long unbeaten run. The Gunners are just one of two sides (together with Newcastle United) who are yet to lose at home, and the supercomputer rates them as comfortable favourites (43.8%) for this one.

The draw (28.0%) and a United win (28.2%) are equally probable. You’d imagine that the Red Devils would be happy with either of those outcomes come Sunday as they look to solidify their grip on a top-four spot.

The supercomputer reckons there’s an 80.3% chance of United playing UEFA Champions League football next season. After a long time in the wilderness, things are finally looking up for those in the red half of Manchester.