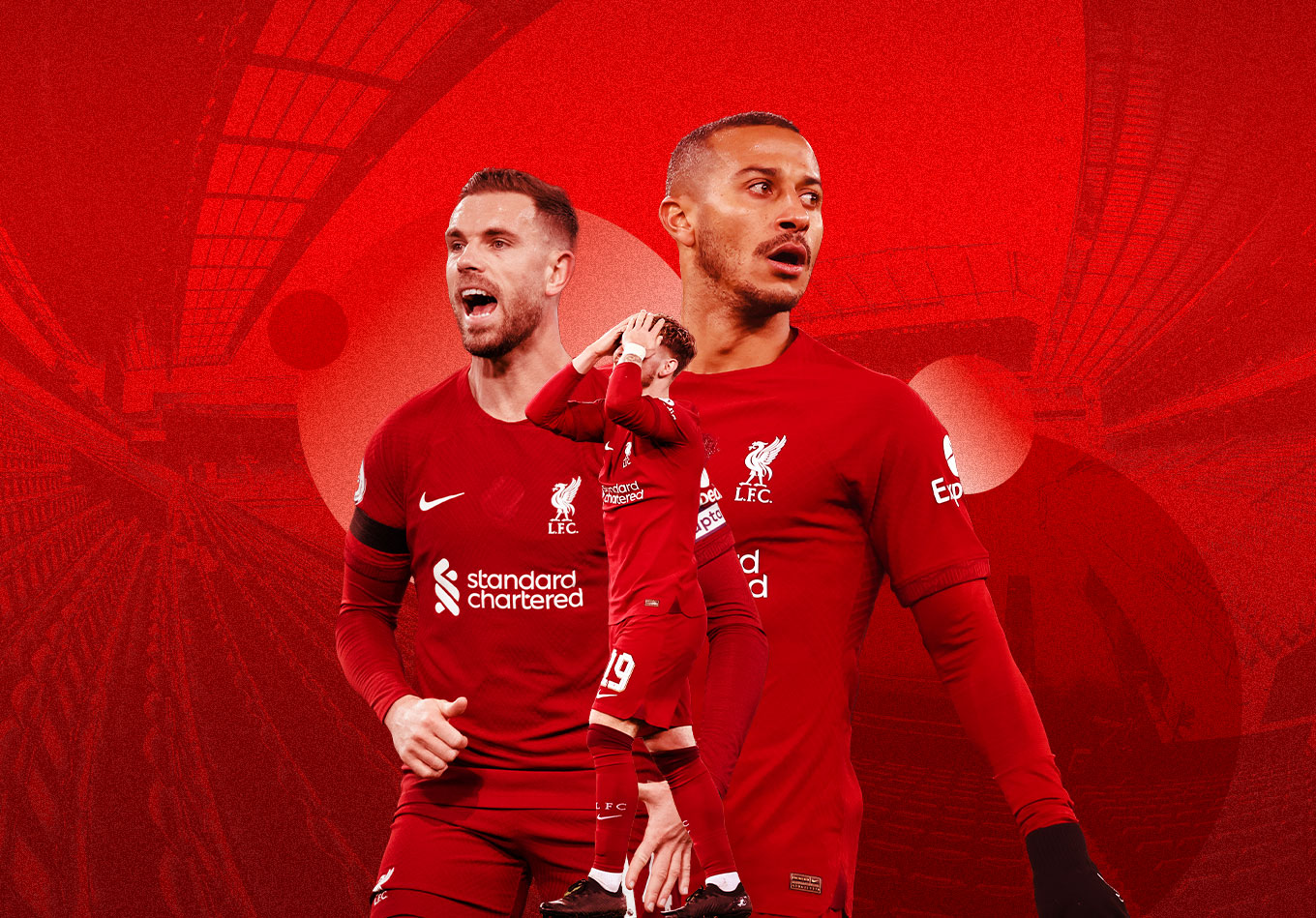 “It’s not a Jürgen Klopp team.”

Jamie Carragher isn’t the first person to say something like that about Liverpool this season and we can’t imagine he will be the last.

The Reds saw their four-game Premier League winning streak come to an end against Brentford last week, with the Bees winning 3-1, and are now seven points off a top-four spot. There is a real danger that the 2022 Champions League finalists will have to settle for a Europa League berth next campaign.

Their form this season has been erratic at best, and Liverpool now find themselves without Virgil van Dijk for at least a month after he picked up a hamstring injury in that loss to Brentford. It wasn’t a shock result either. The Reds had ridden their luck in wins over Aston Villa and Leicester City, with both teams getting at Alisson Becker with relative ease.

Speaking on Monday Night Football, the former centre-back went on to expand on his concerns about his old club.

“Liverpool have bought one midfield player in four-and-a-half years and it’s coming back to haunt them now. Thiago, for me, is not a problem if the other two are high-energy and working.

“Harvey Elliott and Fabio Carvalho don’t look like Jürgen Klopp players. It’s not a Jürgen Klopp team and I want to know why.

“Liverpool look like they are trying to play the Jürgen Klopp way but without Jürgen Klopp players. Liverpool are like a normal team pressing but still play with a high line. Naby Keita isn’t for me and isn’t good enough.”

I’m going to overlook the Keita comment this time around because there are more pressing issues.

The Times then published a feature detailing exactly how Liverpool’s physical metrics had massively dropped off over the years. They’re no longer covering as much distance and are attempting fewer sprints. To compound this, The iPaper spoke to a Premier League analyst who said the Reds had three weaknesses: Liverpool’s vulnerability on transitions, the ease with which they concede chances and their inability to stand up to physicality.

This side is a far cry from previous iterations of this Klopp team. Back in 2018, when he was manager of Manchester United, Jose Mourinho commented on the intensity of the Reds, saying: “Robertson, Mane, Salah, Wijnaldum, Keita, Fabinho: they are physical players and on top of that they are good players technically. We don’t have lots of players with that physicality, so when the game has high levels of intensity it is difficult for us.”

Liverpool went from bullying teams to being bullied. It didn’t happen overnight and has been a slow process, but tactical tweaks this season have put these issues front and centre.

While the midfield isn’t the only problem for the Reds this season, it is perhaps the biggest one. Those in the middle third used to be the engine room. They set the tempo, aided the press and allowed the full-backs to influence games offensively. But they had to evolve as a team.

Initially, it was all about the gegenpress. Liverpool played heavy metal football and they would ambush opponents and then blitz them on the break. Teams wised up to this and started to cede possession to the Reds, instead opting to control the space. Klopp and his coaching team had to come up with a solution to this.

He once famously said that the counter-press was the best playmaker in the world. The new tactics adopted by the opposition meant this particular playmaker was being nullified and Liverpool were forced to turn into a possession-based team. The more of the ball the Reds had, the more apparent it was that the midfield he had assembled wasn’t necessarily technical enough to make the most of the ball dominance.

So, there was a shift.

Instead of using three facilitators in midfield, Klopp changed the dynamic. He went with a controller, a destroyer, and a runner. Gini Wijnaldum departed on a free and was replaced on the left side by Thiago. The man on the right side of the three was tasked with overlapping Mohamed Salah and creating space for Trent Alexander-Arnold.

Not only did the Reds change how they attacked, but they also tweaked their build-up.

Instead of having Fabinho operate as a single pivot, Thiago would drop beside him, and Liverpool varied their approach – as seen in the still above. Fewer switches from Virgil Van Dijk and more passes into feet via the right foot of their Spanish playmaker.

The former Bayern maestro was attempting 21 more passes per 90 (a difference of almost 800 over the course of an entire 38-game campaign). Yet Liverpool were averaging, roughly, the same number of passes. That alone gives insight into how their approach differed. The left-sided midfielder went from being responsible for 7% of the team’s total passes to 11%.

That is a significant shift and highlights how that side of the midfield went from being responsible for off-ball stuff to being key to the team’s on-ball approach. Thiago cannot be in two places at once. He cannot dictate play and put out fires. If he’s doing the former, someone else needs to be doing the latter.

Normally, that would be Fabinho. Nicknamed The Dyson due to his knack for cleaning up the messes made by his team-mates on the pitch, he was key to the all-conquering Liverpool side. His positional play and nous allowed the Reds to pin the opposition in and smother them for large periods. The Brazil international can do that but he hasn’t the capacity to man a midfield all by himself. He needs support.

Last season, he had it with Thiago partnering with him there. This season has been different though.

Liverpool evolved. The signings of Luis Diaz and Darwin Nunez changed the shape of the team. Diaz doesn’t tuck inside like Sadio Mane did, while Darwin and Roberto Firmino couldn’t be any more different as No. 9s. The former plays on the shoulder of the last man while the latter likes to drop to link play.

The Reds had to make changes to their structure.

With both Salah and Diaz hugging the touchline on a much more regular basis, the central spaces had to be filled by others. In the still above, taken from the Community Shield clash with Manchester City, you can see Andrew Robertson and Jordan Henderson in the penalty area along with Firmino. Thiago is the man playing the pass.

If the ball is lost here, Robertson has a lot of ground to make up to get back into a left-back position while Fabinho is marooned in midfield. Thiago and Henderson aren’t exactly powerhouse runners these days capable of making up that ground during transitions.

You can see it again in the game against Fulham. Highlighted are the front three and the two No. 8s in the system. Whereas previously Thiago would’ve taken up a deeper position to cover, he is just as advanced as Henderson in this sequence.

Fulham have players positioned behind the two Liverpool midfielders and if the ball is turned over, Fabinho has a difficult job stopping that attack dead.

The same sort of thing happened in the recent match against Brentford. Liverpool regain possession on their right flank and work the ball to their left side. Thiago works room to play a pass to the only man making a run – Darwin.

In an ideal world, your right-sided No. 8 would be making a second run to support the striker’s run and so they are in a position to pick up any second balls. But Harvey Elliott isn’t an off-the-ball runner. He is much more of a ball-to-feet sort of midfielder who creates, and his xG assisted average of 0.18 per 90 this season points to that.

Liverpool then find themselves in the below predicament. There are no runners to support the forward pass and they aren’t set to press if the ball is turned over. Brentford are able to outnumber Darwin and then pick out a forward pass.

The most alarming thing about this phase of play from a Liverpool perspective has to be the fact Thiago plays the pass to Darwin and then he’s the midfielder to get closest to the opposition before they play the ball out.

This attack for the hosts leads to the corner that they score from.

Klopp defended his midfield unit in his pre-match press conference ahead of the FA Cup tie with Wolves. He said: “Only midfield? It’s a general problem not a midfield problem. Defending starts up front. If you don’t defend from there, then the midfield have no chance. Balance might be a problem now. Brentford’s goals didn’t come from a ball through the midfield.”

While Brentford might not have scored directly from a pass-through midfield, they certainly carved out chances that way, as have a number of other teams this season.

Ultimately, this is a problem that has plagued Liverpool all season and is why they find themselves in sixth position. They are asking players to do things they can’t. The Reds have a plan in mind but don’t have the players to execute it. They’ve been here before under Klopp prior to the arrivals of Van Dijk, Alisson and Fabinho.

It is clear that the club are looking to address this. Interest in Aurélien Tchouaméni and Jude Bellingham confirms as much. Those players are technical but also physical. A nice balance of the two will see the Reds dominate once again. Right now, this isn’t a stereotypical Klopp team but it could soon well be if Liverpool are able to land their targets in the transfer market.