The Beard's New Look: How Harden Has Remade His Game – and Remained a Star | The Analyst 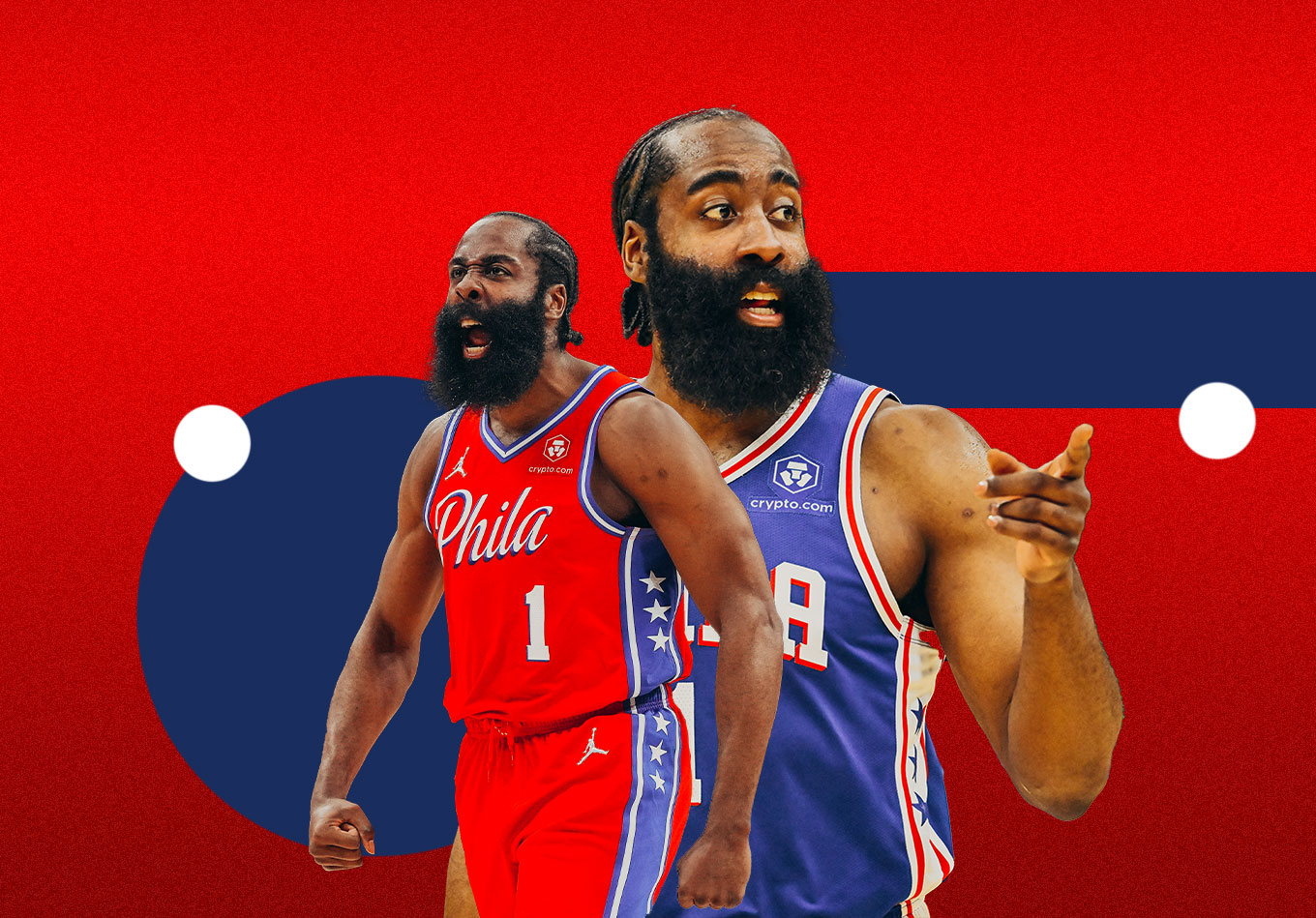 The Beard’s New Look: How Harden Has Remade His Game – and Remained a Star

During the apex of James Harden’s prime, he often received screens set before half court.

It was not rare for teams to double him before half court either. He, as well as guys like Stephen Curry and Damian Lillard, reshaped the concept of where exactly the threat of a scoring possibility began on the 94-foot court.

Those screens are generally a relic these days. They pop up occasionally, but far less commonly. Instead, Harden and the Philadelphia 76ers are shrinking the hardwood.

Snug pick-and-rolls initiated from the midpost are en vogue, akin to the Harden-Dwight Howard partnership from the mid-2010s Houston Rockets.

Back then, Harden hadn’t yet become a clergyman of the MoreyBall parish. He embraced midrange jumpers. Mike D’Antoni wasn’t his coach. He was 25 without an NBA MVP to his name.

Eight seasons later, Harden’s spent many years as the poster boy of an analytically inspired shot profile filled with 3s and shots at the rim, while eschewing the intermediate zone. He’s played for two other teams. He’s 33, beset by various hamstring ailments in 2020-21, and a whole lot looks different than the 2014 All-Star version we saw priming Howard for jams.

Those evolving circumstances have forced Harden to adapt. Now on the downside of his career, he is no longer a perennial MVP candidate. Averaging 22.4 points (59.8% true shooting), 10.6 assists and 6.6 rebounds, that decline hasn’t prevented him from remaining a star. To do so and account for his new reality, he’s remade his game.

During his prime, he melded elegant ball handling, instantaneous burst, sturdy strength and deft footwork. The hamstring injuries of 2020-21 have sapped much of that burst. His handle isn’t as precise. Finishing and navigating traffic inside – especially moving laterally in narrow areas – are dubious endeavors. He’s shooting a career-low 46.3% at the rim on a career-low 21% rim frequency. Aware of his limitations, he’s seeking out other avenues to thrive instead.

Rather than wander into those choppy waters around the basket, he’s welcomed the midrange as a safe haven. He’s driving less than ever and taking his fewest rate of pull-up triples since 2015-16, though he’s still hitting 39.0% of them. His 37.1% free-throw rate is his lowest since 2009-10.

Whereas his strength and footwork were once supporting actors in his potent creation, they’re now the stars. A career-high 33% of his shots are coming from midrange and he’s shooting a career-high 49.3% there. He’s also 14th in the league in offensive DRIP, which projects a player’s contribution to a team’s plus-minus per 100 possessions on offense.

He chisels his 6-foot-5, 220-pound frame into space for jumpers. He doesn’t seem physically capable of efficiently generating all those arduous long balls like he once did, so some step-back 3s have been swapped for step-back 2s, where he’s rediscovered comfort.

Joel Embiid isn’t the lone Sixers star who’s finding solace in the post. Harden is a tough matchup down there too, using a back-to-the-basket game for scoring and playmaking purposes.

Embiid’s off-ball and perimeter prowess help enable these instances. For years, as he garnered MVP consideration for half a decade straight, Harden avoided featuring the non-paint region inside the arc. Now. it’s integral to his stardom and scoring ethos.

While still a very good bucket-getter and individual creator, he’s of a lesser caliber than when 40-ballers were a nightly occurrence as he paced the league in scoring three consecutive regular seasons. Despite that, defenses guard him quite similarly. And, well, they kind of have to. He’s still a 1-on-1 dynamo.

Doubles are routine. Aggressive ball-screen coverage to funnel the offense elsewhere is standard. Help at the nail or one pass away is prevalent. As sharp as ever with his facilitating, he’s equipped to combat all of it. Were he eligible for the leaderboard, his 10.6 assists per game would trail only Tyrese Haliburton’s 10.7.

His pocket passing is crisp and a primary factor in the Harden-Embiid pick-and-roll torching opponents. Constantly bending defenses out of their shell, he excels at compounding the pitfalls of any opening they present with snappy playmaking. Touch, vision, timing, creativity, versatility – it’s all there.

Even as his scoring wanes, his passing ensures he’s a tremendous offensive centerpiece. The Sixers are 6.9 points per 100 possessions better offensively with him on the floor. When he played the first nine games of the season, they ranked fourth in offensive rating. During his 14-game absence, they were 27th. Since his return on Dec. 5, they’re third.

Harden’s multifaceted passing fuels those contrasts and his paramount impact. His control of tempo and recognition of angles are masterful.

The updated, contemporary version of Harden’s style resembles that of a sagacious YMCA hooper. Forged through years and years of experience, he operates with an advanced feel. He hunts the midrange and posts up. He’s a brilliant passer. A deliberate, slow-cooking aura defines his pacing.

Extending the life of his stardom necessitated shifts like those. A full summer to reflect upon his new state ignited them. Harden is no longer a yearly MVP candidate, but he is a top-20ish NBA player and better than last season.

At 33 years old, in his 14th season, after nearly a decade shouldering some of the most burdensome offensive loads ever, he persists as great. Only now, he’s molded himself to match this changed reality, one that incorporates elements from multiple eras of his decade-long successes as an All-Star guard.

This is the new James Harden, a malleable collage of a star who continues to be among the league’s most virtuoso initiators.