Serbia 2-3 Switzerland: Swiss On A Roll As They Reach Second Round | The Analyst 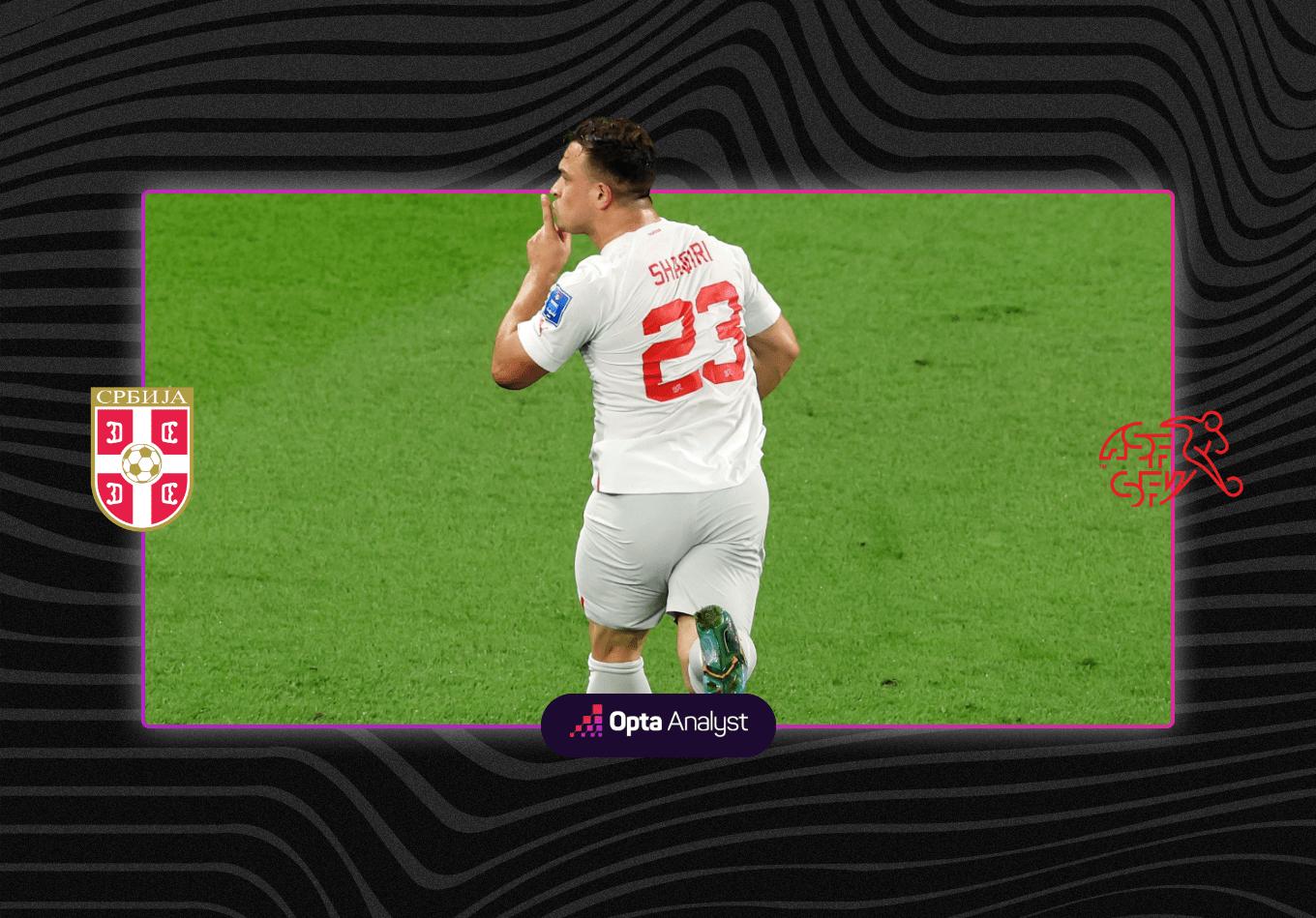 The final day of the group stage at the 2022 World Cup contained fixtures with plenty of backstory. Earlier on we saw Ghana almost happy to crash out of the tournament as long as they could take modern-enemies Uruguay with them. This evening it was Serbia taking on Switzerland, with ill feeling left over from the last tournament meeting between them in Russia four years ago. The two Swiss players – Granit Xhaka and Xherdan Shaqiri – fined for making an (Albanian) eagle celebration after scoring against Serbia in the last World Cup, were both named in Switzerland’s XI for this one, a game Serbia had to win if they wanted to qualify for the Last 16.

Both sides began the game as if under instructions to go three nil up before half-time. We’ve sat through a lot of cautious first halves in Qatar but this game contained six shots in the opening 10 minutes, the best of which saw Andrija Zivkovic thump the post from range, with Dusan Vlahovic’s follow-up smartly saved.

Nine minutes later, though, Switzerland took the lead through Shaqiri (who remains younger than Kevin De Bruyne) as it quickly became clear that this game was surely destined to be the sort of minor classic that World Cups so regularly throw up. One for the ITV4 ultras, the Inspector Morse superfans. As explained, Serbia needed to win this game, so their task very much had changed after that Swiss opener.

No matter. Within six minutes Serbia were level and within 15 they were 2-1 up. The equaliser came from the reliable skull of Aleksandar Mitrovic, heading home a typically great ball from Dusan Tadic. The second was also Dusan-powered but by Dusan Vlahovic, who seized upon some weak defending to guide the ball past Gregor Kobel. Vlahovic – who has struggled since moving to Juventus – is the third player to score on his debut as a starter in the World Cup for Serbia, after Sasa Ilic and Nikola Zigic in 2006.

So now Serbia were up into second place in Group G, the onus back on Switzerland (or Cameroon who were up against Brazil’s second string in the other game). The Swiss took up the baton with relish, equalising on 44 minutes via Breel Embolo. If the rate of scoring felt unusual then World Cup history confirmed that it was. This was the first game to see both sides score 2+ goals in the first half since the iconic meeting between England and Argentina in 1998. The narrative was flowing very strongly indeed.

Of course, that England/Argentina game in 1998 saw no additional goals in the rest of the game, would this match suffer the same fate? Not quite, as Switzerland’s third goal was the pick of the game, an absolutely delightful team move which saw a backheeled assist from Ruben Vargas deftly finished by Remo Freuler. It was the first time Switzerland had seen three different goalscorers in the same World Cup game since they were managed by Roy Hodgson at USA 94.

Serbia looked shaken and it slowly became apparent that they were going to be unable to grow into the half, frozen with the knowledge that they needed at least two goals to save their World Cup dream. Luka Jovic came on for Vlahovic but to little avail. In truth, Switzerland boxed off the second half like high-end chocolatiers, restricting the Serbs to only four shots in the second half, none of them on target. It’s an unwritten law of football that if the first half screams classic, then the second is often a disappointment. That said, two of Switzerland’s three highest xG numbers in a World Cup game have come against Serbia; they know how to handle them.

The game petered out into the sort of naughty shoving match that many enthusiasts enjoy. The game’s total of 11 yellow cards has only ever been beaten in three other World Cup matches, most notably the Howard Webb-officiated 2010 final, which saw 12 bookings (and a red).

Say what you like about how they (sometimes) approach big tournaments, but Switzerland have reached the knockout stages of all five major events they, as a UEFA member, have been eligible for since 2014. The only other European side to do so in that period are France. Switzerland have a mountain to climb if they are to meet the French in the semi-finals, but, hey, they’re used to that.