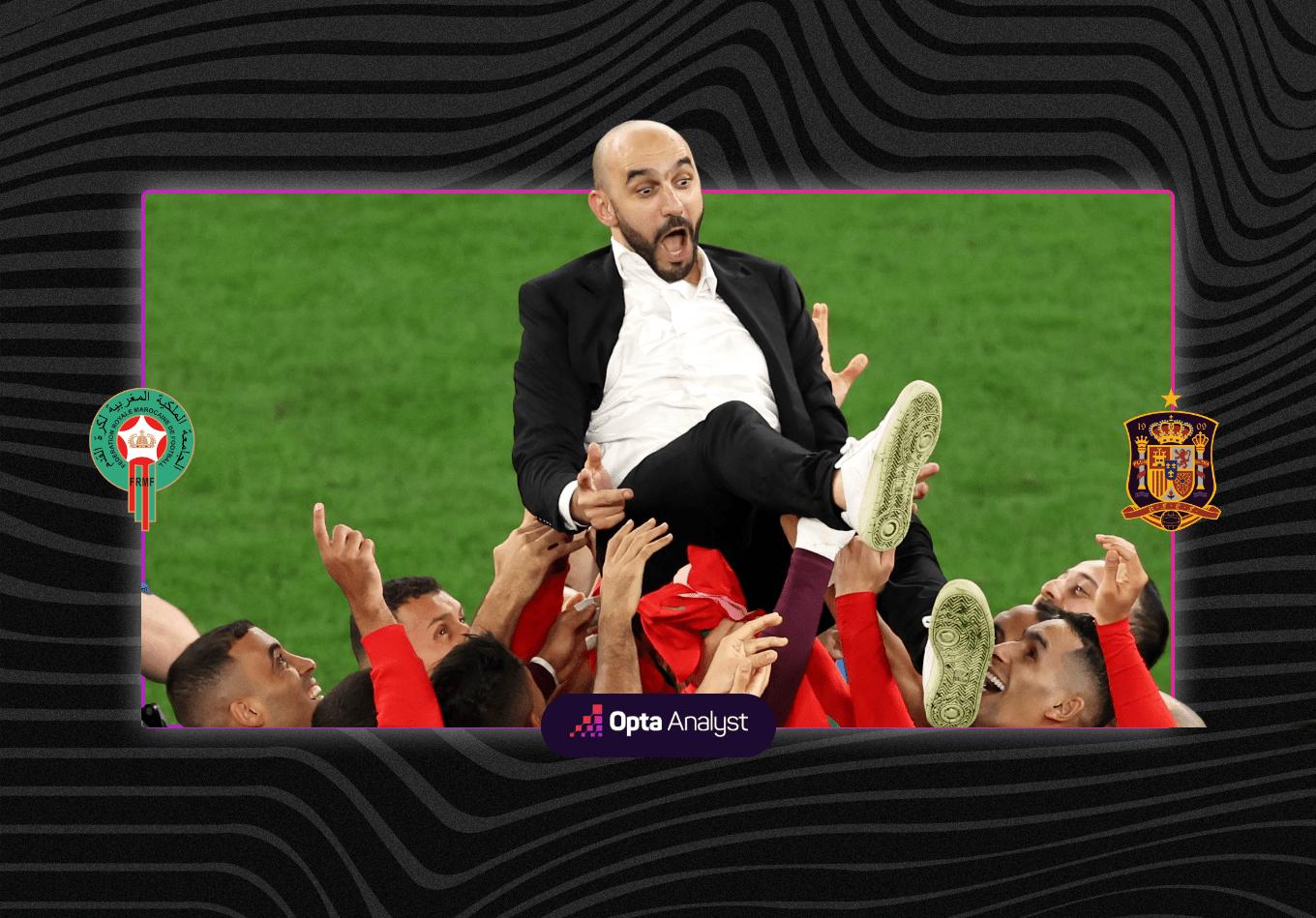 Spain’s penalty shootout woe continues. They exited Euro 2020 at the semi-final stage to Italy after a shootout and they lost a shootout to Russia at the 2018 World Cup in the last 16. With a 2002 World Cup exit to South Korea via a penalty shootout, this defeat means that they’ve lost three World Cup shootouts in a row and have lost more than any other nation in World Cup history (four).

For the fourth successive game at this tournament, Spain started with the Barcelona-powered central midfield trio of Pedri, Sergio Busquets and Gavi, with 18-year-old Gavi becoming the youngest player to start a World Cup knockout match since Pelé in the 1958 World Cup final (17 years, 249 days old).

As expected, with that trio orchestrating from midfield, Spain dominated the passing and possession, but despite that they lacked any real attacking threat. They attempted seven shots in the 90 minutes before extra time, with just one of those finding the target – a shot for every 107 passes attempted.

Furthermore, Luis Enrique’s side had a higher xG total from non-penalty shots in that 7-0 victory (2.74) than they have had in their three games at the tournament since then (2.64).

Overall, only three shots were fired on target in this match. Just two games at the 2022 World Cup have seen fewer, and this game had a 30-minute advantage over those. Morocco had two of those three and can take the lesser blame for a largely dull affair in front of goal than the Spanish, with the Africans having just 23.2% possession across the 120 minutes.

So, at 0-0 – a record-equalling seventh in this World Cup – a penalty shootout was needed to determine who advanced to the quarters. Unfortunately for Spain, they couldn’t pass to a team-mate in this process.

Before tonight, the team beginning second had lost the last seven World Cup shootouts, but Moroccan goalkeeper Yassine Bounou wasn’t allowing that to become eight in a row. His saves from Carlos Soler and Sergio Busquets, after Pablo Sarabia had hit the post with Spain’s first penalty, meant that Spain become just the second team to fail to score a single penalty in a World Cup penalty shootout after Switzerland (vs Ukraine) in 2006. Bounou broke a record of his own, by becoming the first African goalkeeper to save a penalty in a men’s FIFA World Cup shootout.

With Morocco’s shock shootout win, they advance to the quarter-finals and become just the fourth African team to reach that stage in World Cup history after Cameroon in 1990, Senegal in 2002 and Ghana in 2010. All three of those suffered heartache in their attempts to make the final four of those tournaments.

Having conceded just one goal in just under 330 minutes (including all injury time) across this World Cup, nobody will be looking forward to playing Morocco – even more so considering their underdog status.

We wait to see if Morocco will make it fourth time lucky for Africa.