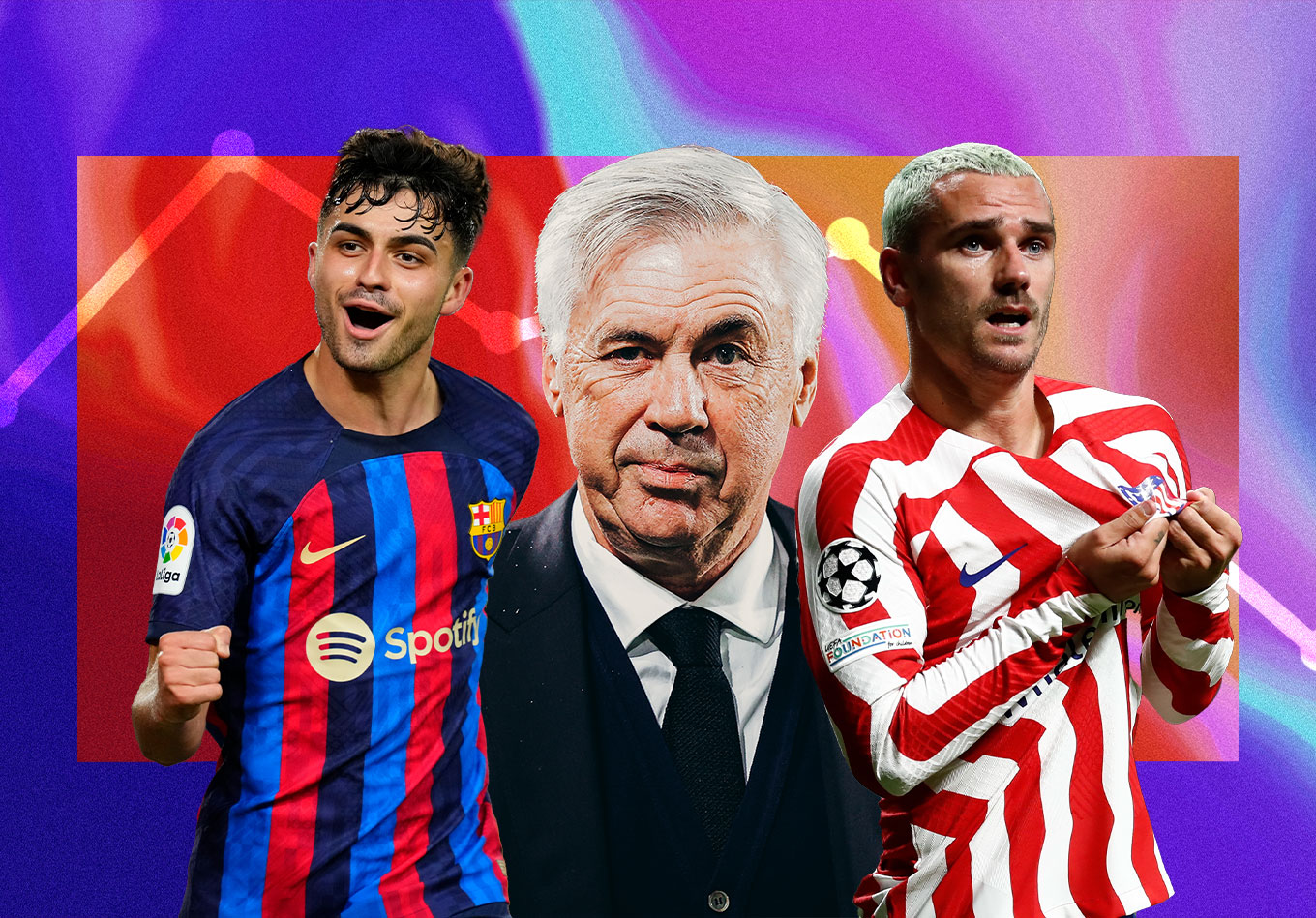 Who wins in the battle of Spain’s big two? Which clubs will qualify for the Champions League? Who will be scrapping for survival? Fear not, our trusty supercomputer has the answers for you.

Who knows what to expect upon La Liga’s return? Spanish teams waved 83 players off to the World Cup – second only to the Premier League’s 126. How will that affect the players moving into the second half of the season? No fallible human could possibly know. But luckily, we’ve put the supercomputer to work, giving it one last push before it powers down for the Christmas holidays.

And just like always, the machine was only too happy to oblige. We’ve got title numbers to give you, predictions for the top four and a sense of who will be spending next summer gearing up for a season in the Segunda division.

The supercomputer is predicting a close one at the top, with the battle for the title between Real Madrid and Barcelona. Stop us if you’ve heard this one before.

Barcelona currently hold a two-point advantage over Los Blancos, but with Carlo Ancelotti’s charges well clear of Real Sociedad in third place, this is the clearest two-horse race you’ll see.

Barcelona pulled every economic lever they could get their hands on last summer and are expected to do the same in January to strengthen again. They rebuilt their squad to claw their way back into domestic contention after three years in the La Liga wilderness – Real Madrid (two) and Atlético Madrid (one) have shared the last three titles.

The supercomputer isn’t overly confident it will be enough. But it’s not overly confident in Real Madrid, either, and gives Barcelona the slightest of edges, predicting they’ll win La Liga 51.2% of the time, compared to Madrid’s 48.7%.

The juicier question in Spain is who will qualify for the Champions League. Real Sociedad are sitting pretty in third but there are only five points separating them and ninth-placed Villarreal on 21 points.

With one and two sewn up, the supercomputer has four candidates in its crosshairs for the last two qualification places. Atlético Madrid have a 37.9% chance of sealing third place and a 63.6% chance overall of Champions League football next season. Real Betis and Real Sociedad have the best chance of being the final Spanish team playing UCL football next season, with a 40.6% and 40.2% chance of qualifying respectively.

Villarreal, after their heroic charge to the Champions League semi-final last year, have left themselves with some work to do in ninth. Unai Emery, the man who masterminded that run is at Aston Villa now and Quique Setién is driving (steering? operating?) the Yellow Submarine. There is a 28.4% chance that they’ll be busy on Tuesday and Wednesday nights next season.

Who Will be Relegated from La Liga?

Elche are cooked and might as well get out the beach flip-flops now. They have a 95.4% chance of relegation. Elche have cycled through five managers already this season, one for every percentage chance they have of staying up. The predictor really doesn’t like that volatility.

Sevilla, who are currently 18th are not expected to remain in the doldrums. Julen Lopetegui has moved on to pastures new with Wolves and Jorge Sampaoli has replaced him. They are the team projected to take the biggest leap, moving from 18th to 12th on our final La Liga predictions.

Perhaps the biggest shock in the relegation places according to the supercomputer is Espanyol. Managed by Diego Martínez, they haven’t gotten off to their best start and the manager himself admits things have to improve, but the supercomputer doesn’t see them doing that. The machine is 40.4% sure that they’ll be relegated.

Cádiz, who have had some close calls in recent years could be set to finally make the plunge back into the second division according to the supercomputer. Getafe, Almeria, Girona and Celta Vigo aren’t safe yet, either. They each have roughly 25% of crying into their café con leches come May.