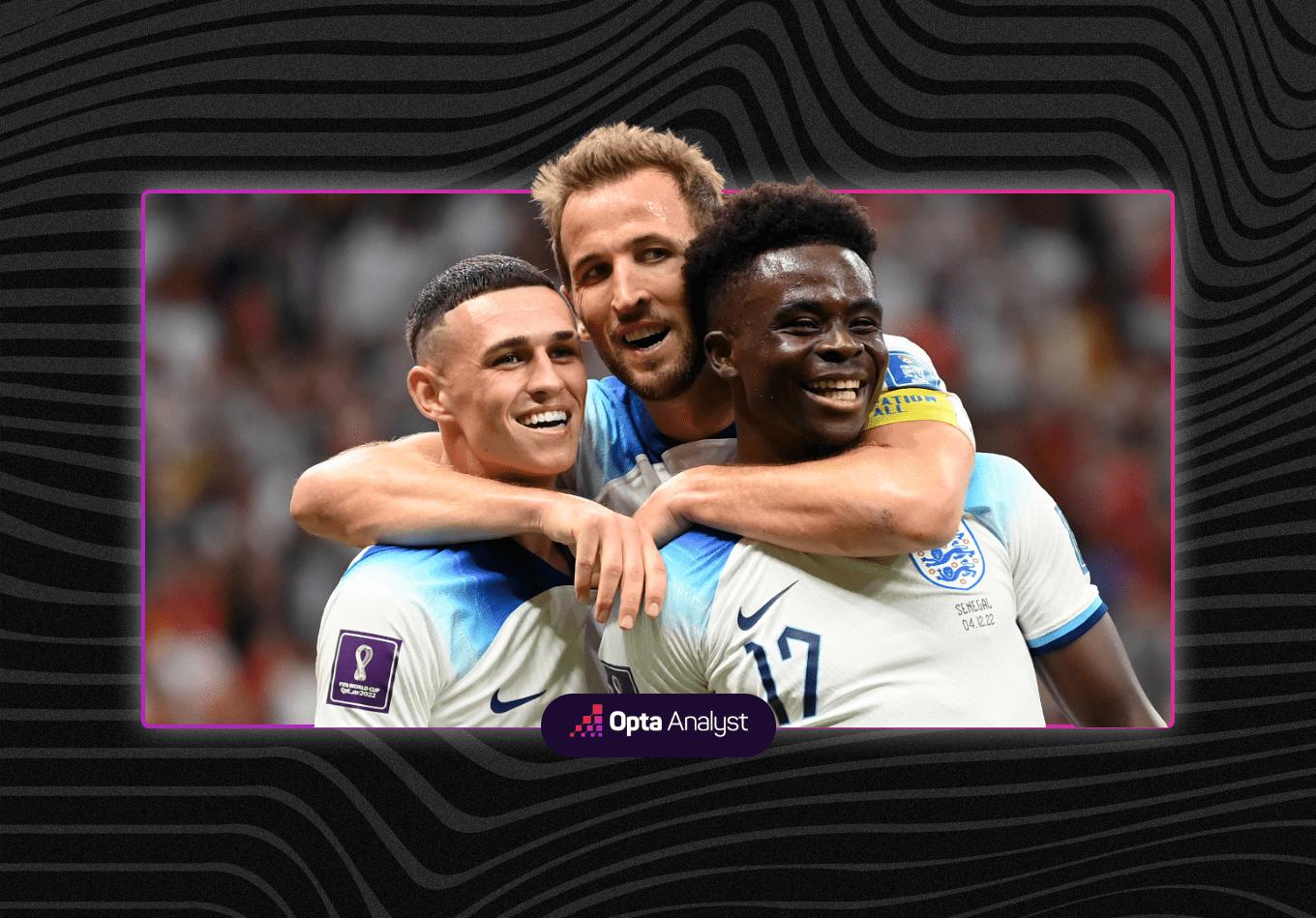 The 2018 World Cup was all about goals for Harry Kane. The England No. 9 netted a double against Tunisia in their opening match and followed that up with a treble against Panama to help the Three Lions book their place in the knockout stages. He then fired a penalty past David Ospina in the round of 16 to take his tally to six, a figure he finished with on his way to claiming the Golden Boot.

The 2022 World Cup has been about everything else for the England skipper.

Kane failed to have a shot in the 6-2 win over Iran, he didn’t work the keeper in the 0-0 draw against the USA or in the 3-0 victory versus Wales in the ‘Battle of Britain’. He finally found the back of the net in the 3-0 victory against Senegal, but he’s miles off the pace in the race of the Golden Boot.

Yet despite the lack of goals, the 29-year-old has arguably been more important to England this time around than he was four years ago.

In Russia, there was an overreliance on Kane. He was the goal threat as opposed to a goal threat. This time around, Gareth Southgate has tweaked his tactics and the Three Lions look better for it.

Declan Rice sits in front of the centre-back pairing and the full-backs push up alongside him so that the West Ham captain doesn’t have to singlehandedly cover the width of the pitch.

The wide forwards hug the touchline while Kane acts as a traditional No. 9, holding the ball up and dropping deep to link play in a not-too-dissimilar role to the one he has excelled in for Spurs over recent years. There is also, however, a touch of a false-nine about the Spurs man at this tournament. He is, after all, manipulating space for others to do damage in.

The two No. 8s in midfield both push up to fill the space between the wide forwards and the centre-forward. The shape can be seen below.

The shape allows Kane to play his natural game.

He has never been just a pure poacher and there has always been a playmaker element to him as a player.

His touch map from the World Cup to date shows just how much he is dropping deeper to link play, particularly in the left half-spaces. He’s getting on the ball all across the pitch for England in the opposition’s half.

Southgate has found a way to tap into that without blunting the attack. He leads the way for assists in the competition with three and Leroy Sané is the only player with a higher xG assisted total (1.75 to Kane’s 1.5).

Kane has been pulling the strings for the side in Qatar, all while questions were being asked as to whether he should be in the starting XI having blanked in the group stage.

The goal against Senegal will quieten that crowd down a little. Southgate said as much in his post-match press conference: “Any centre forward wants to get off the mark, and of course for him, it stops all the questions. It was an important goal for him and us.”

It was a big goal. It gave England a 2-0 cushion going into the break. It was also Kane’s 11th goal at a major international tournament, and he’s now overtaken Gary Lineker as the nation’s most prolific player in these competitions. He is now just one behind Wayne Rooney as England’s record scorer too.

And, of course, goals dominate headlines and shape narratives. If Kane nets against France in an England win, everything will be geared towards that record-equalling strike.

But the 2022 World Cup has already been a record-equalling one for the England captain.

He is the first player for the Three Lions to provide three assists in a single World Cup tournament since David Beckham in 2002. No Englishman has ever provided four on record in a single edition of a major tournament before (since 1966). That is another record up for grabs on Saturday.

The way Kane is operating in Qatar isn’t exactly conducive to directly getting goals or assists. Yet it is beneficial to England.

Only Luke Shaw (14) has been involved in more open-play sequences ending in a shot than Kane (11) and the Manchester United full-back is the only England player to have created more chances (seven) than the Spurs centre-forward (five).

Kane is quietly impressing in England’s build-up.  He had a key role in the opener against Senegal, for example.

As England build down their left flank, Kane drops to that side of the pitch and drags Kalidou Koulibaly over with him. This creates space between the centre-backs and it is this space that Jude Bellingham attacks.

The left-sided centre-back for Senegal has been dragged over to the right side for the reigning AFCON champions as he looks to close Bellingham down. This leaves the right-back with two players to look after in Jordan Henderson and Bukayo Saka.

This situation only comes about because Kane drops in the build-up. It disrupted the defensive line and allowed the runners from midfield to exploit the gaps. Kane, however, isn’t credited with anything for that phase of play as he doesn’t assist or score.

There was another example of this in the second half.

The England No.9, again, drops to pick up possession. Koulibaly is forced to follow the England captain into that part of the pitch, and he steps up and away from the defensive line. He isn’t quick enough to block the pass that Kane plays to Saka on the England right and this creates space for those in white.

Bellingham makes a run from midfield to support Phil Foden in attack and all of a sudden it is two-vs-two in the middle.

The pass to Saka isn’t the best and the bounce slows the attack down a little, but had it come off, the Arsenal winger is one-vs-one with space to attack and team-mates to hit in the area. It is an ideal scenario and, again, Kane plays a significant role in it.

And while he registered two assists in the win over Iran, his involvement in the build-up for the Raheem Sterling goal was just as important as the final pass itself.

He drops off to show for a pass and one of the three centre-backs follows him into that part of the pitch.

There is a bit of a wrestle but what eventually happens is Saka counter-presses, wins possession and is then tripped. The loose ball is picked up by Bellingham who then drives past the centre-back who had initially pressed Kane.

The left-sided centre-back then has no choice but to engage with the Dortmund youngster before a pass is played to Kane.

The right-sided centre-back is now on the left flank having had to track Kane. Defensively, Iran are all over the place and Kane’s cross into the box is poked home by Sterling. This isn’t solely down to the England captain but his role in the goal cannot be overlooked.

Runners for England don’t have the space to attack if Kane doesn’t play his role.

Kane isn’t always heavily involved in possession for the Three Lions, but when he is, he makes it count.

He has attempted just 68 passes in total during the World Cup. However, 60% of these passes have ended in the final third. As you can see in the pass map below, Kane is very effective at getting the ball from one area into more dangerous ones.

Kane may have only taken seven shots so far in Qatar, but he’s been directly involved in 33% of the goals scored by England and he’s one of only two players to have been involved in 11 or more open-play sequences ending in a shot.

The 2018 iteration of this tournament was dominated by Kane and his goals. This one, from an England perspective at least, is being shaped by Kane and his playmaking abilities. You have to say it is a success too.

The Three Lions have never had as many different scorers (eight) at a single edition of any major tournament and the 12 goals the team have scored is their joint-most at a major international competition (along with 2018).

In previous tournaments under Southgate, England have had certain limitations – no goals from midfield, for example. Those limitations don’t appear to exist this time around and Kane is playing his part in that.

Even if he fails to add to his one goal, there is an argument to be made that the 29-year-old’s 2022 World Cup has been better than his 2018 Golden Boot-winning campaign. Goals matter, of course, but they aren’t the be-all and end-all.

Kane should be judged on more than those numbers.