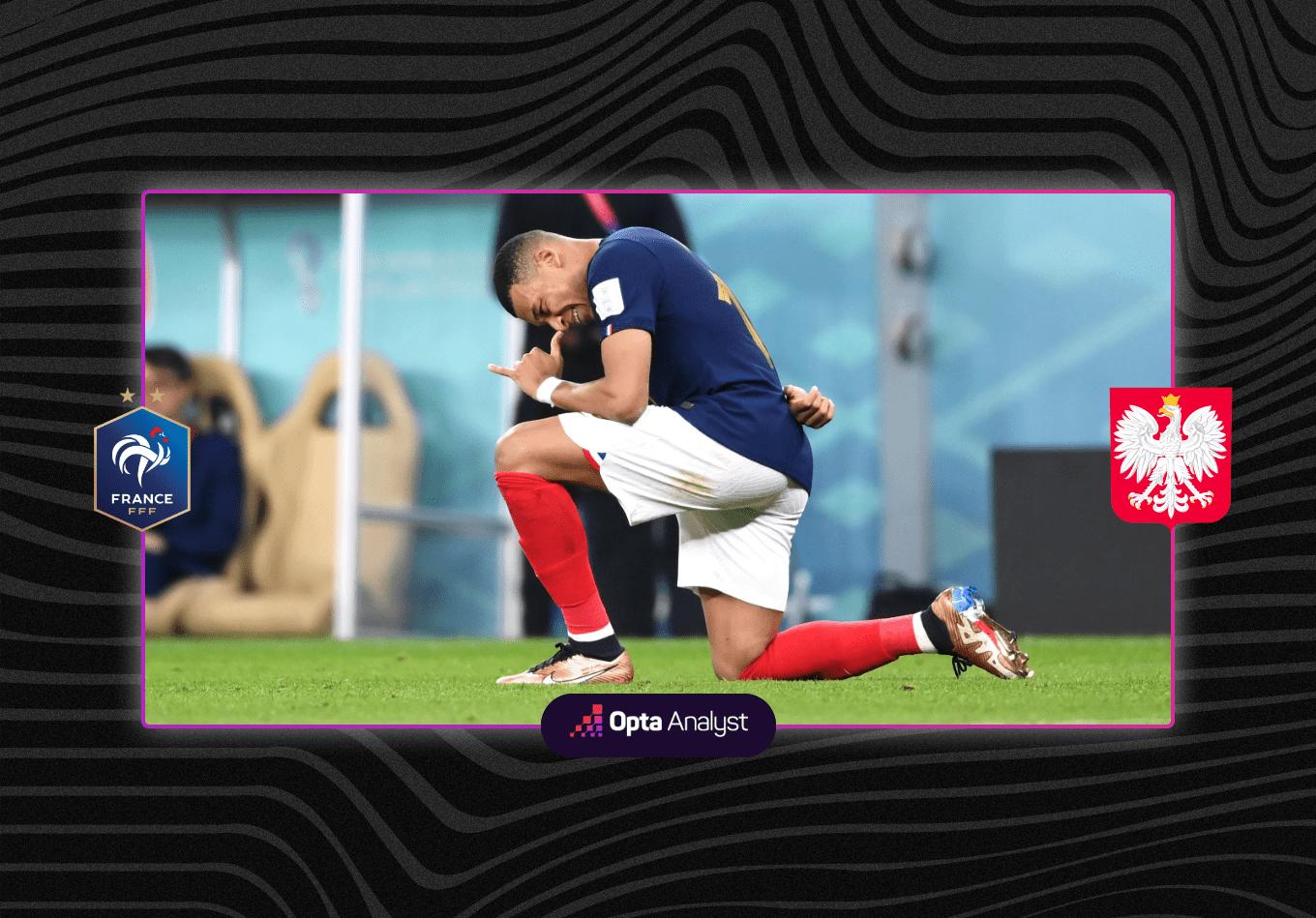 Bids to retain the World Cup have at best been difficult through history and, perhaps more appropriately in recent years, embarrassing with the previous four winners failing to advance beyond the group stage. And for the previous two title holders to reach the knockout stages in their repeat bid before France this year, there’s been one team that’s stood in the way.

France are the first defending World Cup champions to reach the quarter-finals since Brazil in 2006. The last defending champion to reach a semi-final or final was Brazil in 1998. France beat both of those Brazil sides to end their bid to retain the trophy. So perhaps that means if they’re able to stay out of their own way, France are emerging as the team to beat in this tournament.

That’s at least in part because there doesn’t seem to be a team in the tournament that has what Les Bleus do going forward. Their attack was very heavy up the left in the opening 45 minutes (55.9% from the left, 20.6 middle, 23.5 left). So of course it would follow that their first massive chance came up the right after an unacceptable Polish giveaway in the 29th minute, but Olivier Giroud missed the target after a firmly hit ball from Ousmane Dembélé for what looked like being the goal that would put Giroud ahead of Thierry Henry as the country’s all-time record goalscorer.

Poland had a chance in the 38th, but Piotr Zielinski put a hard shot right at Hugo Lloris and the subsequent scramble saw Jakub Kaminski’s follow-up attempt blocked near the line. It put Poland on seven shots in under 40 minutes after totalling a combined six in the first halves of their group-stage matches.

And just after that Polish formidability started to settle in, Kylian Mbappé  threaded a ball through to Giroud on a run into the box and he finished for his record 52nd goal for France. At 36 years, 65 days of age, it made him the oldest goalscorer in the World Cup knockout stages since Cameroon’s Roger Milla in 1990 (38y 34d).

So that was the old. Youth followed. Mbappé scoring his tournament-leading fourth goal in the 74th by beating Wojciech Szczęsny high to the near post for his eighth career World Cup goal before the age of 24 to surpass Pelé as the all-time leader in that category.

He added his fifth in the first minute of stoppage time by taking Szczęsny to the far post. He’s headed to the quarter-finals for the second time in his career, and he’s doing so with seven goal involvements with a tournament-high 46 touches in the opposition box.

And he’s playing just one attacking role for perhaps the tournament’s most dangerous team. Antoine Griezmann, for example, used to score those goals for France, but his role has evolved into that of a creator. He created four chances against Poland and is on a tournament-leading 15 (seven from open play) and a tournament-leading 2.67 expected assists. Griezmann is getting plenty of attention as that creative force, but he actually trails Dembélé (nine) and second-choice left back Theo Hernández (eight) in open-play chances created. Hernández led the team in touches (81) against Poland while completing 21 of 22 passes in the final third. It can come from all over the pitch.

France have been exposed at times, which is excusable with their injuries, but they’re yet to keep a clean sheet. Their xG against is a middling 3.43 when considering it against other teams to reach the quarters – Argentina are at 1.33 and the Netherlands 4.20 – but that’s only one side of things. Their xG differential (xG minus xG conceded) is still 5.63. Score more goals than the other team. Progress. France are expected to do just that.

Since the Round of 16 was introduced in the 1986 World Cup, France have appeared at this stage on six occasions and progressed from each (1986, 1998, 2006, 2014, 2018 and 2022). But their opponents at this event so far have been Poland, Tunisia, a disappointing Denmark and Australia. Can they now make it five of their last six in the quarter-finals? The first step is turning on the TV to see what England vs. Senegal sends their way.