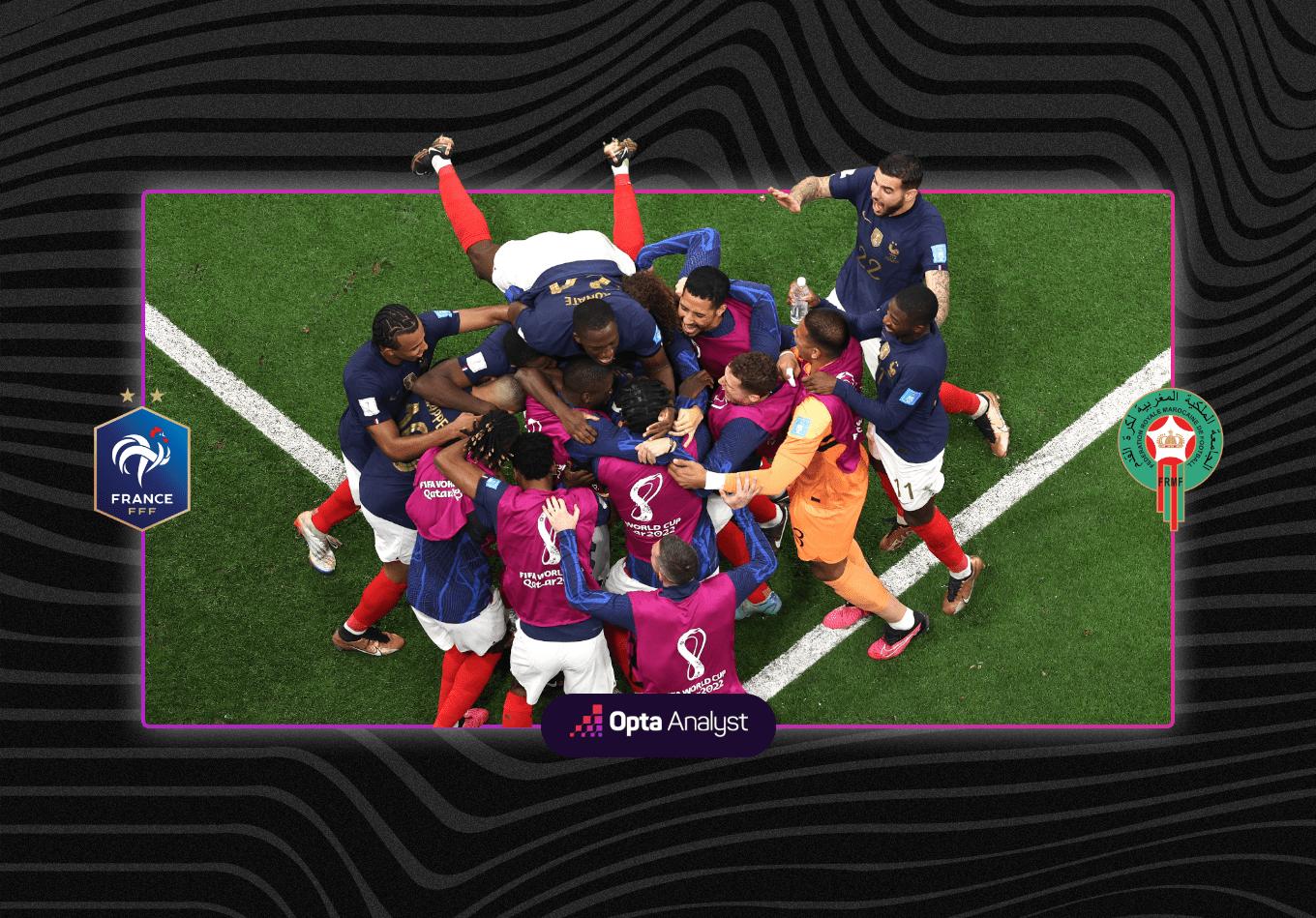 Morocco had gone five matches plus 30 minutes of extra time without conceding a goal they didn’t score against themselves. It took fewer than five minutes for the world champions to end that, and the title holders are now a win away from becoming the first to repeat as champions since Brazil 60 years ago.

The early blow came from the creators you’d expect, albeit not quite with the fluidity. Antoine Griezmann got the ball to Kylian Mbappé in the penalty area, but his shot wasn’t able to find its way through a congested box. It did however find its way to left-back Theo Hernández at the back post, who was able to get his foot over the elevated ball and direct it in for an underrated finish against an underrated opponent.

With that early game state established, it took Morocco 32 minutes to complete more passes than they did in 90 minutes against Portugal (176):

But leads tend to give France space, which can be lethal, and it looked that way 12 minutes after the goal when Olivier Giroud lit up the woodwork with his left foot. It happened again 10 minutes before the half with Mbappé going forward for an initial opportunity after a Morocco giveaway, and it was followed by Giroud with another narrow miss with France’s seventh shot of the match.

That was all outdone with Morocco’s best chance of the half after winning a corner, and a promising Hakim Ziyech delivery resulted in an overhead attempt from Jawad El Yamiq that found the woodwork and sent the teams to half-time with a match on their hands. It was one of four set pieces in the closing minutes, all coming from The Morocco Right Side™ we’ve all come to know with Ziyech and Achraf Hakimi working off each other:

As promising as the end of the first half was, when the whistle blew there was suddenly this note of reality to deal with:

Morocco didn’t check their phones at the break though, and came out of the tunnel even better. They had 72.8% of the ball in the opening 15 minutes of the second half and worked it into dangerous areas of the pitch, and at times an equaliser looked imminent. But the match wore on and it wasn’t resulting in serious chances on goal. At 75 minutes, they’d still been outshot 12-7 and amassed 0.28 xG.

The 13th shot for France took an unlucky bounce for the first African side to reach a World Cup semi-final, and the 14th followed right after with Randal Kolo Muani scoring 44 seconds after coming on to all but send France through.

It was a French side struck by illness, but it was a French side that again showed there are multiple French sides. Personnel aside, France don’t struggle for variety in ways in which they win matches at World Cups, and while that may not always be pretty, it is useful. Recall they fell behind in their opening match, only to dismantle Australia. Things regressed some in a 2-1 win over Denmark before resting their best XI against Tunisia. It was comfortable against Poland in the last 16. They weren’t great against England, but England ultimately didn’t put them in a spot where they needed to be. Against Morocco, France saw it out for 85 minutes, the match ending with the team that hadn’t kept a clean sheet all tournament doing so against the team that had four.

So France’s seventh World Cup semi-final produced a fourth straight win at this stage after coming up short in the first three. They’ve gone on to win two. So have Argentina. On Sunday, one will have three.