Four Tactical Battles That Will Decide England vs. France | The Analyst 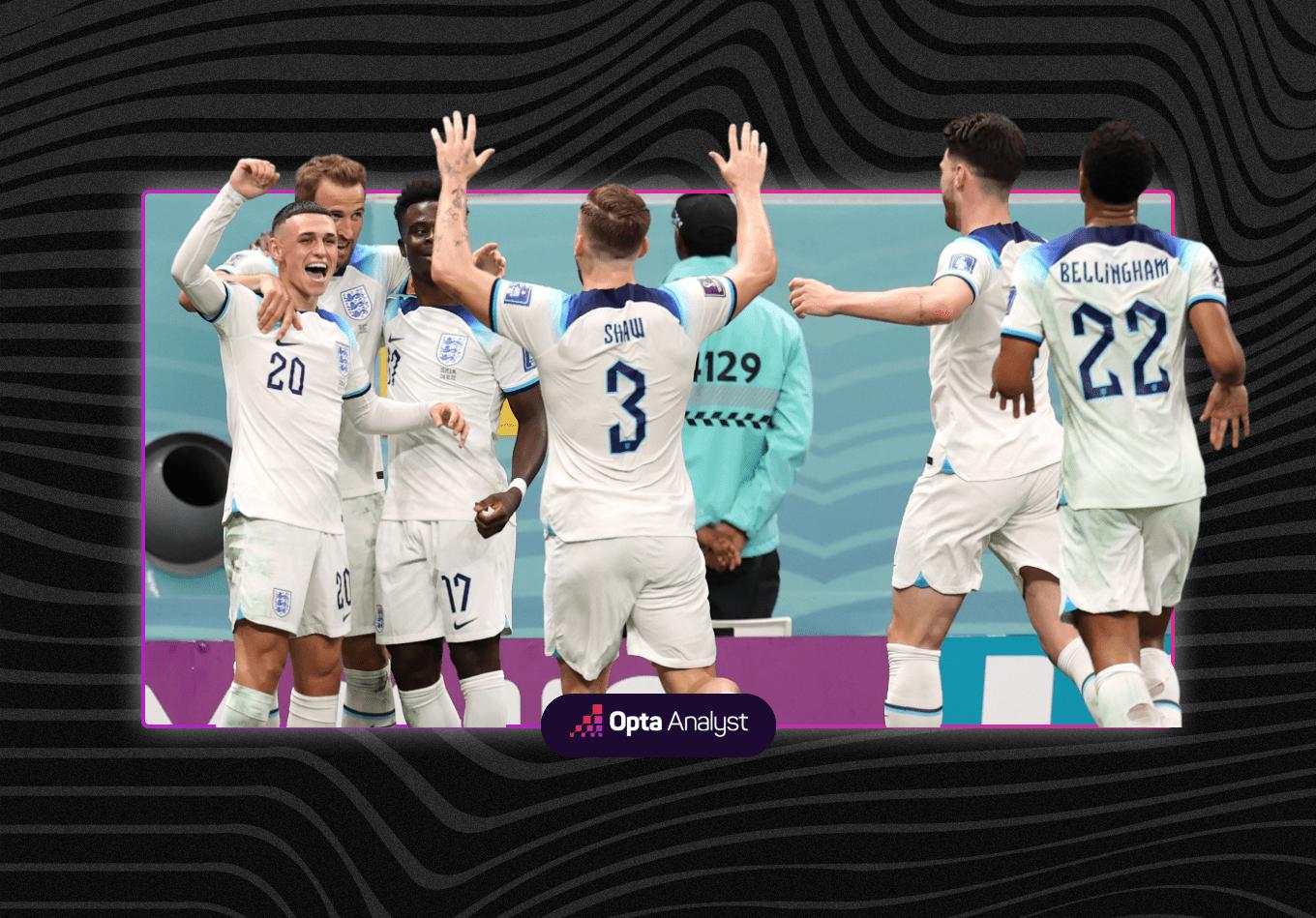 England take on France in the last of the World Cup quarter-finals on Saturday. From winning the transitions to the importance of Luke Shaw, we analyse four key tactical battles that will play a huge part in deciding where this game is won and lost.

Optimising moments of transition (when the ball is turned over) has become the defining tactical principle in modern club football and inevitably this has seeped into the international game, albeit without the punchiness or dexterity we are used to in the Premier League. That might be about to change, because broadly speaking any World Cup can be split into two parts: the possession-versus-counter battles of the group stages – although Morocco continue to progress by executing this brilliantly so far – followed by the tense ‘Big Six’-style clashes in the final few rounds.

It is here that transitions will become prominent as conservative international coaches wait patiently for moments to explode into life, and there will be no better example of this than England vs. France: a game that will lurch from quiet shuffling to surges of entertainment; that will see both nations properly tested for the first time.

So far England and France have dominated the ball and been forced to wait for their chances, yet both nations have shown an unusual capacity to break at lightning speed. The overall pattern of the game then, and the key battle in broad terms, will be the sudden thrusts of verticality that follow a turnover.

England top the charts for progressive passes (147) in Qatar and France are just behind in fourth (119), while France are first for successful dribbles (37) and England are second (32). Perhaps more than any other statistics, these two highlight the speed and directness with which both nations can play.

These might be surprising numbers to England fans tired of prosaic passing around the back, but this merely hides their best quality – and the same is true for France. Tellingly, both rank highly for 10+ open-play pass sequences (England are second with 83, France are fourth with 73) yet both are masters at long balls, with England completed the most long passes in open play (197), and France fifth with 167.

Surprisingly, England are best placed to come out on top in this sort of transitional battle – as long as Southgate’s side are brave and aggressive. The headline statistic for this section is the contrasting PPDA between the two sides, essentially a proxy measure for pressing intensity. England rank fifth-lowest with an impressive 10.5 – i.e they allow the opposition to make just over 10 passes on average before making a challenge – whereas France are 22nd lowest with 16.6.

This difference runs across the numbers. England are fourth for high turnovers with 38 but France are joint-12th with 29, while England are fourth for total pressed sequences with 67 and France are 13th with 45. The sample sizes are small, of course, but the level of opponent has been similar. This difference reflects Didier Deschamps’ desire to sit right back and defend with caution. England are surprisingly assertive by comparison.

Nowhere is this difference more apparent than in central midfield, where the sublime Jude Bellingham dominates a variety of areas (he’s made the fifth most tackles (11) and six successful dibbles the most in this England side, to name two) but the French pair of Adrien Rabiot and Aurélien Tchouaméni look easy to ruffle. This was most notable in the opening 4-1 victory over Australia when France were hit with multiple narrow counter-attacks in the first half, only to cling on and recover, with Rabiot and Tchouaméni frequently caught flat-footed and too far apart from one another.

Tellingly, France allow the sixth most progressive passes against this tournament, with only Australia, Costa Rica, Japan, Poland, and Ghana allowing more. That is the most striking stat you’ll find about Deschamps’ side, and evidence that his cautious mentality can leave them on the back foot, slow to react to dangers developing.

England’s greatest strength, on show in the demolitions of Iran and Senegal, is the genius of Harry Kane’s movement into the number ten space. It is easy to imagine Kane receiving a line-breaking pass between Rabiot and Tchouaméni before turning and creating a chance for the on-rushing Bellingham, Bukayo Saka, or Phil Foden. Kane has made more progressive passes (14) than any other striker in Qatar and tops the charts for assists (three).

Australia scored via a simple one-two built down France’s left wing and Poland found space on both sides with one-twos they should have taken advantage of. It is not rocket science to work out that Theo Hernández can be too attacking on the left flank and is rarely, if ever, given defensive help by Kylian Mbappé, while Jules Koundé looks a little wobbly being played out of position at right-back.

This problem is exacerbated by the overall narrowness of Deschamps’ defensive shell, captured by the fact that France rank highest for the total number of switches played against them (30). Teams try the longer horizontal pass to attack those exposed full-backs, and it has nearly worked several times already. England will feel they can be the first to take advantage.

England are obviously strong out wide with the dribbling of Saka and Foden, but more significantly they have Luke Shaw to target Koundé, linking with Foden to create the one-twos that France can find difficult to contain. Shaw has been involved in more attacking sequences (14) than any other England player, has the most shot-creating actions (12), and ranks second among all players at the World Cup for progressive passes (28), just behind Lionel Messi. He’s also created the most chances overall and from open play for England thus far.

England are also the tournament’s most prolific side at ‘pull backs’, with six so far, suggesting they will be comfortable playing out wide and looking to get to the byline.

4) Mbappé Versus Kyle Walker the Best Argument for Formation Change

So far, we’ve talked only about England’s attacking ability, so it’s probably about time we mention Mbappé. He has had 157 touches in the attacking third, 50% more than the next best Antoine Griezmann (102), and has been involved in 36 of France’s attacking sequences, the highest number of any player at the tournament. Pretty much everything goes through him, and he looks lethal whenever he gets on the ball.

Mbappé is the reason why such a cautious France side can dominate on so many attacking variables, from total shots (second with 70) to crosses (third, on 92) to direct attacks (fourth, with seven).  Mbappé himself leads all players for total shots (21) and shots inside the box (16).

Mbappé’s power and directness strikes fear into opposition hearts, and France’s five shot-ending high turnovers (joint-fourth most) shows France can still win the turnovers you would expect from a high-pressing nation.

Although he cannot really be contained, England’s success relies mainly on the pace of Kyle Walker when confronted one-on-one plus, indirectly, England’s capacity to get tight to Griezmann as he drops between the lines to release Mbappé in those transitional moments. Declan Rice and Bellingham have been exceptional so far at eliminating the threat on the counter, amassing 26 tackles and interceptions between them plus a further 45 recoveries, but they are yet to face anything quite this good.

It might require a formation change, one that puts Walker on the right of a back three up against Mbappé with Kieran Trippier around for additional support, and although this potentially puts England on the back foot, there is reason to believe France’s own negativity will prevent suffocation like we saw against Croatia in 2018.

In fact, the tactical battles highlighted here point to a 3-4-3 being the best option. Kane-led breaks with Saka and Foden hurtling forward are not affected by the switch; the potential meekness of Rabiot and Tchouaméni means England don’t necessarily need a third central midfielder, and using wing-backs may release Shaw into more dangerous areas.

The closer you look at England against France, the more it looks like it is Southgate’s side who are better prepared.