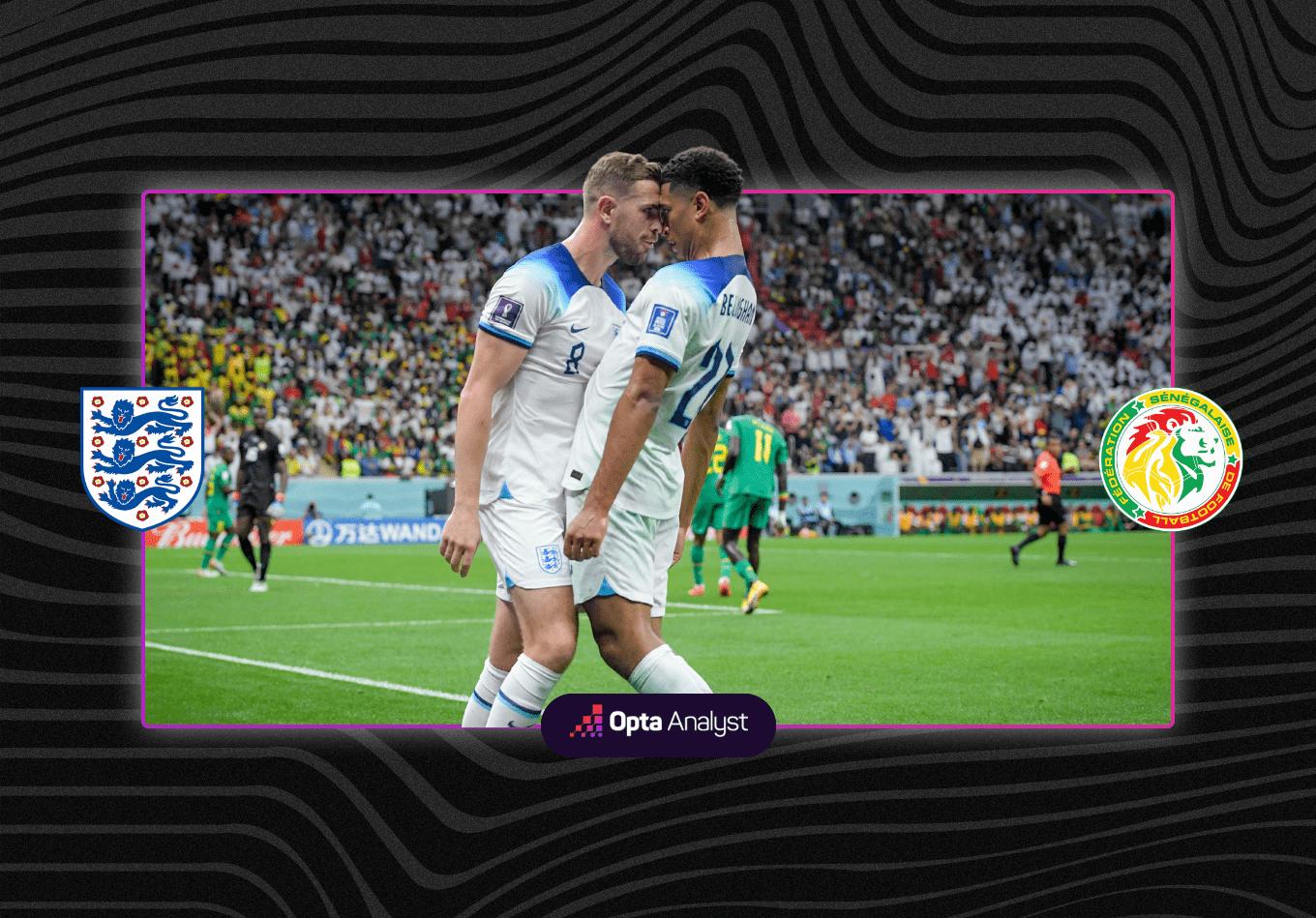 England came into this game nursing an unbeaten seven-game record against African sides in their World Cup history, although the only time they’d experienced one in the knockout stages was against Cameroon in the 1990 quarter-final, a game in which the Three Lions were largely outclassed, progressing thanks to a late pair of penalties from Gary Lineker. Senegal began 2022 by winning the African Cup of Nations and ending the same year as the first African nation to reach a World Cup semi-final would be a fair reflection of Aliou Cissé’s squad, even shorn of the injured Sadio Mane. England were favourites, but this is knockout football and the margins are tiny.

Senegal had the first opportunity of the game, Boulaye Dia finding an alarmingly direct route in between England’s central defence before an intervention from Harry Maguire allowed Jordan Pickford to gather. You simply don’t get that sort of power surge against Wales. England settled after that, Saka drifting into the centre, with Jordan Henderson noisily energetic on the outside. Ambassador, with this front six you are really spoiling us. Harry Kane’s evolution into a visionary tournament 10 continued too, with a couple of high-end passes which offered a warning to Senegal’s defence.

Some passes were less impressive; Harry Maguire’s in the 22nd minute for instance. Trying to play quickly, he was instead intercepted, and, after Dia’s effort was blocked by a combination of John Stones’ knee and arm, the ball fell to Ismaila Sarr who, from six yards out fired over, under pressure from Jordan Pickford. It was 0.32 of pure World Cup xG, and the biggest chance of the game so far. England’s ability to pass constructively out from the back was being effectively throttled by Senegal’s midfield, shown by the fact that Maguire and Stones exchanged 25 passes in the opening half hour alone.

Senegal’s growing confidence received another injection a few minutes later, Jordan Pickford making a legitimately great save from Dia. It was the closest either team had come and, finally, it seemed to shake England from their big-game torpor. On 38 minutes, England’s other Jordan – Henderson – opened the scoring after a delightful burst and squared assist from Jude Bellingham. Henderson has only scored three times for England but two of them have come in tournament knockout games, which is where it counts.

Ten minutes later it was 2-0, Bellingham winning the ball in his own defensive third, driving forward before releasing Phil Foden who then played in Harry Kane. The 2018 World Cup Golden Boot winner took the seventh shot on target of his World Cup career and scored his seventh goal. Some level of consistency that. Kane became England’s eighth scorer at this World Cup, a record spread for the country, while it also took him clear of Gary Lineker on 11 tournament goals. Kane even chose to do it live on ITV, out of respect to the BBC’s lead presenter.

Some say (they are wrong) that 2-0 is a dangerous lead, despite mountains of evidence that the popular scoreline is incredibly safe. Senegal rolled the dice at half-time, making three substitutions, in the knowledge that the next goal would be the most crucial of the match. And it went to England, with arguably their most aesthetically pleasing strike of the game, Phil Foden hurdling a tackle and slipping the ball across to Bukayo Saka, who, with the deftest of touches, lifted it past Edouard Mendy to make it 3-0. Foden duly joined Bobby Moore (in a World Cup final, no less), Keith Newton, David Beckham (twice) and Harry Kane as England players to record two assists in a World Cup match. The Foden clamour… it was justified, especially when it was rapidly confirmed that Foden was the youngest player to assist 2+ goals in a World Cup knockout match since Brazil’s Ronaldo against Denmark in 1998.

A three-goal buffer allowed Gareth Southgate – who has now seen 23% of England’s all-time World Cup goals occur under his watch – to give Foden and Saka some rest, bringing on Jack Grealish and Marcus Rashford in their stead. England have waited a long time to play in a World Cup with as much squad strength as this. Good timing to do it in the first edition where you can make five substitutions per game.

The closing stages brought the sort of encounter that delights fans of the team who are comfortably winning but disappoints neutrals hoping for drama. England had only one shot after their third goal and saw the game out with ease. They ended the match with three goals from four shots on target, and only a tiny lead on Senegal when it came to expected goals. But at this stage of a World Cup it’s the ability to finish chances that makes all the difference. One more goal at this World Cup will make it the highest scoring edition in England’s history.

So now we switch focus to next Saturday when France and England will meet in a knockout tournament for the first time in the sport’s history. Two of the most storied football nations in the game’s history finally going head to head in a winner-takes-all tournament encounter. Mbappé vs. Foden, Tchouameni vs. Bellingham, Giroud vs. Kane. It’s the World Cup, isn’t it.