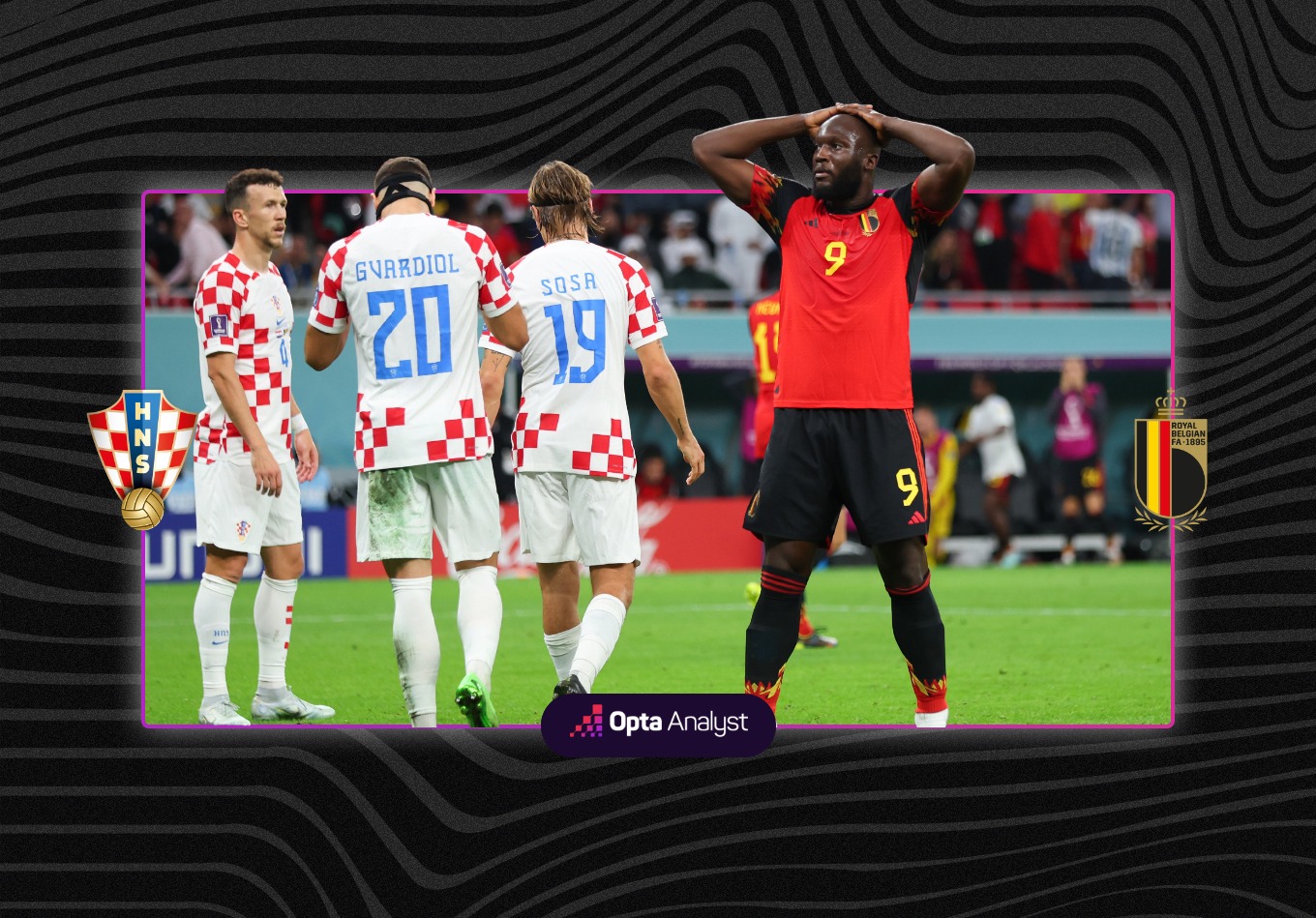 The first half between Croatia and Belgium produced exactly the sort of football you’d expect from 22 players boasting an average age of 30 years and 142 days old, the second oldest combined line-up in a World Cup.

If we’re being kind, it was a controlled and wily first 45 from both teams, with each side content to spar in the middle of the pitch. An early Hakim Ziyech strike in the other game in Group F put the onus firmly on Belgium to attack, knowing they needed a win. But Belgium seemed like they were saving their energy for a push later in the game, while Croatia were more than happy to contribute to a controlled game, safe in the knowledge a draw suited them fine.

If we’re not behind kind, then it was laboured and sluggish. Other adjectives are available.

Whichever way you skin it, chances were few and far between early on. Kevin De Bruyne – who basically looked like Belgium’s only hope of creating anything – took advantage of a rare moment of transition to burst forward through midfield in the 13th minute. He put Dries Mertens through but the former Napoli forward, starting a match for Belgium in all competitions for the first time since last summer, skied his finish.

Croatia’s biggest “chance” wasn’t a chance at all. As Yannick Carrasco mis-controlled a loose ball in his own box and lunged to clear, he caught Andrej Kramarić on the boot. Anthony Taylor pointed to the spot. Yet Luka Modrić was spurned the chance of a penalty against his Real Madrid team-mate, Thibaut Courtois, who was spared by a marginal offside call in the build-up.

Neither side managed a shot on target in the first half. It was only the second game of the tournament to fail in that regard, after the snoozefest that was Japan against Costa Rica.

The second half saw more action in the first five minutes than the entire first half. It took Romelu Lukaku, on for Mertens at half-time, all of three minutes to register the game’s first shot on target. Croatia hit back with three chances of their own, Mateo Kovačić, Marcelo Brozović, and Modrić all stinging the palms of Courtois. They were comfortable saves, but the sense of adventure was spreading.

The first big moment came on the hour mark. De Bruyne, receiving the ball on the half-turn in between the lines, was again the catalyst. He played Carrasco in whose chance was blocked but rebounded out to Lukaku… who somehow hit the post from six yards out. The Inter man then nodded over from almost the same square foot on the pitch just moments later. Rust? Nerves? Who could tell?

Unfortunately for Lukaku, he’d be at the heart of the action, but for the wrong reasons.

Two more golden – golden – opportunities fell his way. Each time, the ball sort of awkwardly hit Lukaku, with the striker not really anticipating the fact that the ball would come to him. The forward has played just 31 minutes of domestic football in Italy this season, and who knows what may have happened had he come into this tournament sharp and firing.

His five shots came on an expected goals value of 1.7. It was a brutal finishing performance.

De Bruyne tried in vain. His three chances created were the most of anyone on the pitch, but he found the game passing him by all too frequently. He touched the ball just 50 times. The lowest mark he’s made this season for Manchester City when playing the full game is 52.

In truth, Belgium have just been too toothless in the attacking third this tournament. They scored just one goal across their three matches, and their shot conversion rate of just 2.9% is the worst of any team to have scored a goal at the tournament. Despite averaging more possession in each of their three games than their opponents, the Red Devils were simply unable to convert passing moves into chances. Thirty-seven times did Belgium have a passing move of 10+ passes in this tournament. They managed to convert those moves into a shot or touch in the opposition box just 5% of the time. That’s a tournament low.

It’s hard to get past the age narrative when talking about this team, but there’s good reason for that. This line-up was the second oldest XI (31 years and 95 days on average) in a World Cup game this century, after Australia in 2010 (31y, 118d vs. Germany).

Five of the players in Belgium’s starting XI today also started in their last game in the 2014 World Cup: Courtois, Jan Vertonghen, Toby Alderweireld, Axel Witsel, and De Bruyne. In that same game, Lukaku and Mertens came off the bench.

For comparison, only three of England’s entire squad in 2014 are at Qatar.

Thibaut Courtois made his 100th cap today. He’s the seventh player overall after Vertonghen, Witsel, Alderweireld, Eden Hazard, Mertens and Lukaku to reach that milestone. All those other names were in the squad today. How many will be in 2026?

It would be unfair to say they limped through after their performance on Matchday 2, but Croatia are making it through to the last 16 without consistently inspiring. They’ll play the winner of Group F – likely Spain. They’ll be underdogs for that, but there’s always a chance the Modrić swansong continues.