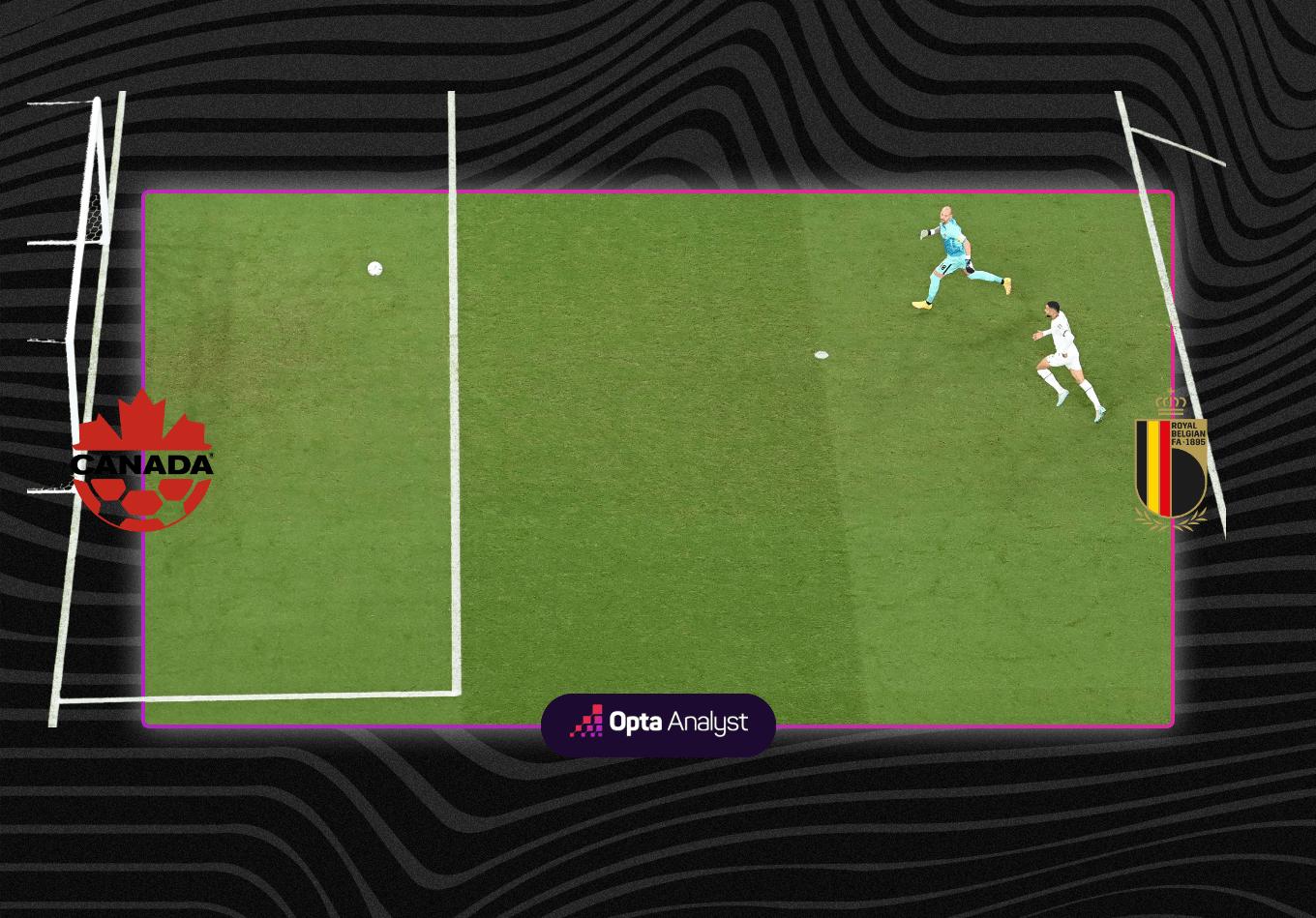 Morocco came into this game with the highest chance of progression from Group F according to the faithful Opta supercomputer. The north Africans were rated at 91.6%, because they needed only a point to get to the second round, and they were theoretically facing the weakest team in the group, a Canada team who had zero points from their opening two games, a return that did not reflect how well they had payed at points against Belgium and then Croatia. Morocco hadn’t successfully navigated a World Cup group since 1986, but hopes were high ahead of this encounter at the Al Thumama Stadium.

Yes, the Canadian vibe at this World Cup has been set to “fun” but sometimes things can be too fun, too furious. Less than four minutes had elapsed in this game when Canada goalkeeper Milan Borjan decided to deal with a backpass with a thumping 10-yard first touch, which presented Hakim Ziyech with a long-range open goal on his left foot, and there’s not many footballers you’d back more than the Chelsea man with that sort of opportunity. At just over 30 metres, his neat lofted finish was the third longest goal of the 2022 World Cup so far, and the second fastest African goal in the competition’s history after Asamoah Gyan against the Czech Republic in 2006.

Morocco, aiming to become the first African nation to finish top their World Cup group since Nigeria back in 1998, didn’t sit back, and added a second goal halfway the period via Youssef En-Nesyri, who absolutely rifled home after being put through by Achraf Hakimi. Not only were Morocco hurtling to the top of the group but they were doing so in considerable style.

Canada, perhaps thinking about their flight home, or the 2026 World Cup, could have been forgiven for checking out, but they have buckets of spirit and exploited one of Morocco’s few known issues, their propensity to score own goals. Nayef Aguerd putting through his own net in the 40th minute ticked off quite a few milestones. It makes him, for the time being, Canada’s joint-highest scorer in World Cup history, and it was the 100th goal of this World Cup, the first own goal of this World Cup and the third own goal Morocco have scored in their World Cup history.

Morocco thought they had scored again just before the break but Youssef En Nesyri’s effort was disallowed for a fractional offside. Still, even with only three goals and eight shots, this was a game well worth watching, something driven home by the lack of action in the Croatia Belgium game taking place simultaneously. South Park may have sung “Blame Canada” but one thing you mustn’t blame them for is a lack of entertainment in their games at the 2022 World Cup.

That said, the second half, understandably, was a less frenetic affair. Morocco knew that, needing a draw, they effectively had a two goal cushion and duly sat back, not posting a shot of any kind in the entire half. And why should you, when you are the first African team to get seven points in a World Cup group and you didn’t even concede a goal to an opposition player while doing so.

Even so, in the 71st minute Canada came incredibly close to equalising, veteran Atiba Hutchinson — playing what is likely to be his final game for the national team — saw a header hit the bar and bounce down on to the line. Frank Lampard’s true global legacy, goalline technology, showed that it was not a goal, but it came mighty close. Keeper Milan Borjan was out of his goal again late on, but legitimately, up for a corner but the Moroccans held firm. Canada, just like they did in 1986, lost three out of three at the World Cup (they are only the third nation to start with six successive defeats at World Cups, after Mexico and El Salvador) but anyone who watched them knows that they contributed a lot more than zero points. They ended the tournament with an xG of 4.47, which is more than Australia and Morocco combined (4.0xG), both of whom both made it through to the last 16. Sometimes this game is cruel.

Hopes for Group F were high, given it contained the teams who came second and third at the 2018 World Cup, but both Belgium and Croatia laboured through their fixtures, leaving Morocco as deserved group winners and Canada as a fun hors d’oeuvre for the next World Cup. No-one in Group E, not even Spain, will relish playing the Atlas Lions in the second round. This is only the second World Cup where two African nations have got through the group stage, and Cameroon and Ghana still have a chance of progression tomorrow too. With only five African teams in the finals, it’s shaping up to be a wonderful edition for the continent.